From darkness there is life. It begins as one blank canvas to an extent. And with our will and our luck, we are free to embellish it as we wish.

Such are the circumstances of Art Nouveau pioneer Loie Fuller in the 1890s as she literally danced the furthering of modern dance, theatrical lighting and cinema into full color.

Challenging the black-and-white gender norms at the time as a performer and as her own manager, producer, choreographer, costume and lighting designer, onstage, Loie metamorphosed.

She bloomed as a flower, flitted as a butterfly, and blazed as a flame with swirling yards of silk and bamboo wands sewn onto sleeves colored by hand-tinted frames and projections of tinted light as she performed her seminal Serpentine, the first known dance to be recorded on film and an evolution of the skirt-dance, the anti-academic evolution of ballet and a taming-down of the can-can. 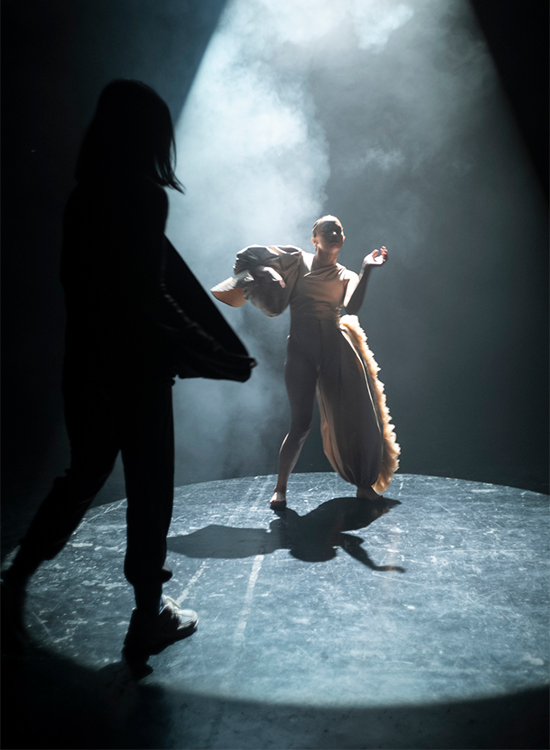 “I feel connected to her in more ways than I can explain. She has been influencing my work all this time,” says Fifth Wall Fest’s founder Madge Reyes, who is directing and choreographing the three-minute, one-woman act Serpentine performed by Misha Bernas.

Fashion designer and Serpentine’s costume designer Sassa Jimenez shares with YStyle, “Loie Fuller’s voluminous clothing and colorful lighting inspired me to think of clothes in motion as opposed to just on a mannequin or a model. I wanted to make something that wasn’t just pretty to look at; it needed to be something you’d want to move and dance in, too.”

“I used the lightest chiffon I could find, which was silk chiffon,” describes Sassa, a material so light — and invented only in the 1930s — that it takes away the need to add a frame like the bamboo that Loie used. “I really wanted the softness of the fabric to move around with Misha, and I wanted her to be able to dance freely in it.”

Sassa’s creations have their own role to play. “Angelic” is Sassa’s touch, making Misha’s wings diaphanous yet dynamic in light-reflective white, as ethereal as a heavenly creature.

And then she takes form. “We experimented with a more structured and contemporary silhouette to counter that,” says Madge.

“It required a little bit more engineering,” explains Sassa. “We made a more structured and modern beige leotard with asymmetric puff sleeves and a puffy pant leg. We lovingly called this look ‘dumpling.’”

Staging the tribute in the era of TikTok, Madge says, “It’s an opportune time for the curious.” 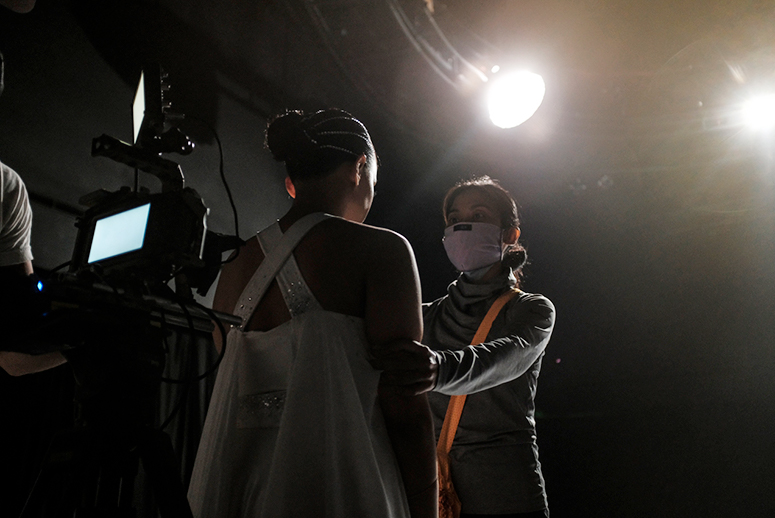 Madge adds, “Music was also a big signifier for this project,” referring to compositions by Eric Trono. “I let the composition further inspire me to realize the dance for the screen.”

One hundred and thirty years after the Serpentine was first danced, Misha twirls and swirls as if the clothes are her own petals and wings. With all elements at play, it’s hard not to feel the urge — to want to feel the same way, to feel as free, to express the full range of our emotions with our bodies. That, in these strange times, we do not have to be so colored only in aggression and anger, and to find strength in our own tenderness.

“I’d like to think that there’s a little bit of Loie Fuller in us all,” Madge concludes. “With that same hunger to innovate and the passion to live life in full color.”

Stream Serpentine at @fifthwallfest on IGTV.