The 2021 MTV Video Music Awards was back in full force and your favorite artists and personalities paraded on the red carpet in their sartorial best.

Last year’s scaled-back VMAs saw a socially distant red carpet, with performances on outdoor stages due to the threats of COVID-19. But this year’s awards night, held at the Barclays Center in Brooklyn, New York, seemed to have a sense of “normalcy” as seen with a full (but masked) audience, and artists all glammed up, ready to perform or physically receive their awards.

Through the years, the awards show has been known for unforgettable performances, and bold and daring fashion moments (remember Lady Gaga’s meat dress in 2011?) that have been indelibly stamped in pop culture history.

Those who walked the VMAs red carpet this year came in hot—from the night’s big winners and early 2000s hitmakers, to TikTokers and YouTubers.

Olivia Rodrigo was ready to accept her awards—Song of the Year for Drivers License and Best New Artist—in her full-length, fitted vintage Atelier Versace dress from the fashion house’s Spring/Summer 2021 couture collection.

Like Rodrigo, there were several who took the full-length route, including singer and Cinderella star Camila Cabello, who arrived in a pink and red number by Alexis Mabille Couture; and rapper Saweetie in a silver Maison Valentino gown.

Meanwhile, host Doja Cat, who had multiple costume changes throughout the evening, rocked the red carpet in a black and maroon bodysuit and above-the-knee platform boots by Andreas Kronthaler for Vivienne Westwood.

There is no stopping for the night’s big winner Lil Nas X, who bagged the Moon Man for Artist of the Year and Video of the Year for the controversial Montero (Call Me By Your Name) hit.

He owned the red carpet in a lavender Atelier Versace number complete with an off-the shoulder top and a sparkly train.

Celebrity couples were out and about, too, with cheesy PDAs and tight styles.

Blink-182 drummer Travis Barker and Kourtney Kardashian, clad in an all-black ensemble from Thom Browne and Olivier Theyskens respectively, arrived at the venue hand in hand.

Show stealers were Megan Fox and beau Machine Gun Kelly, who sparkled in their sequined outfits. Fox was in her barely there Mugler dress while MGK was wearing a fiery Dolce & Gabbana suit.

Alicia Keys, who was wearing a Louis Vuitton ensemble, and her husband, producer Swizz Beatz, were a definition of cool on the red carpet.

Also spotted on the red carpet were TikTok and YouTube stars, most of whom brought their fashion A-game for the event.

TikTok sensation-turned recording artist Bella Poarch, who was nominated for Best Special Effects for the video of her debut single Build a Bitch, arrived in an all-black lacy jumpsuit, complete with a dramatic train and her signature pigtails.

Social media star Bretman Rock slayed the red carpet wearing a vintage black and yellow Roberto Cavalli, the same exact dress worn by the late singer Aaliyah in the 2000s VMAs. While Aaliyah wore strappy heels to go with the dress, Bretman took it to the next level and match it with thigh-high leather boots.

Check out more of the stars’ red carpet looks below. 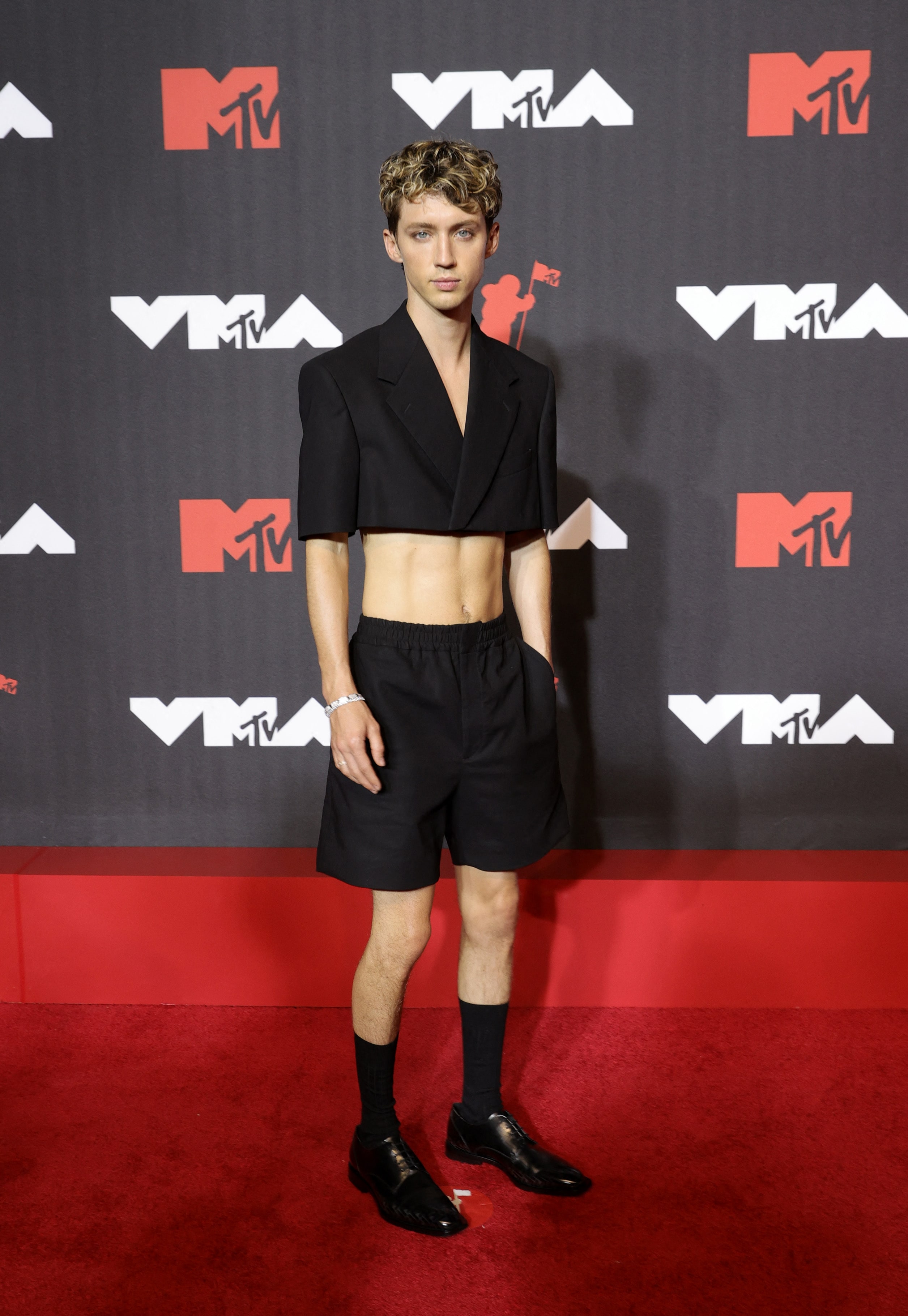 Troye Sivan in a cropped blazer and bottoms from Fendi's Spring/Summer 2022 collection. Photo by Jamie McCarthy/Getty via AFP 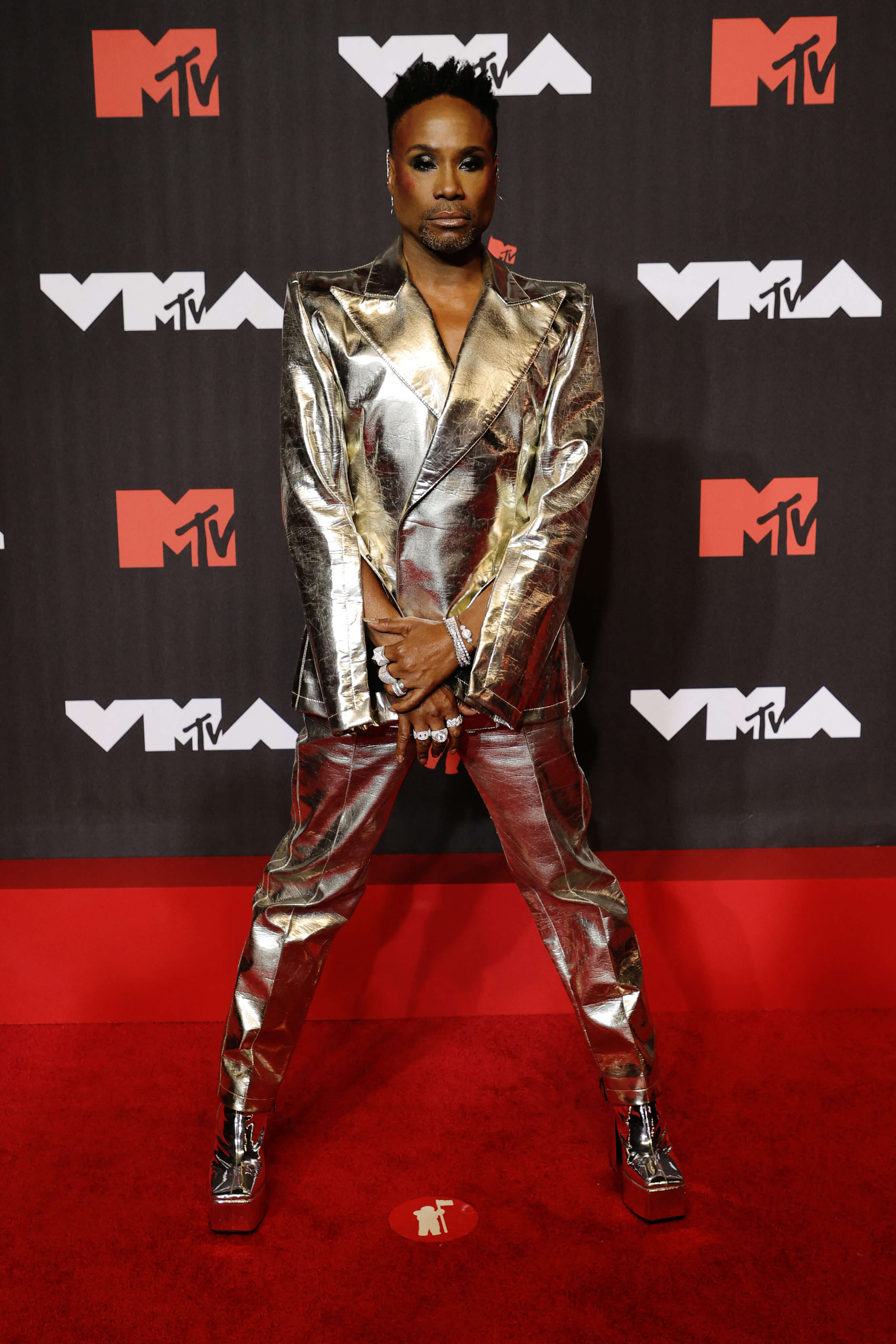 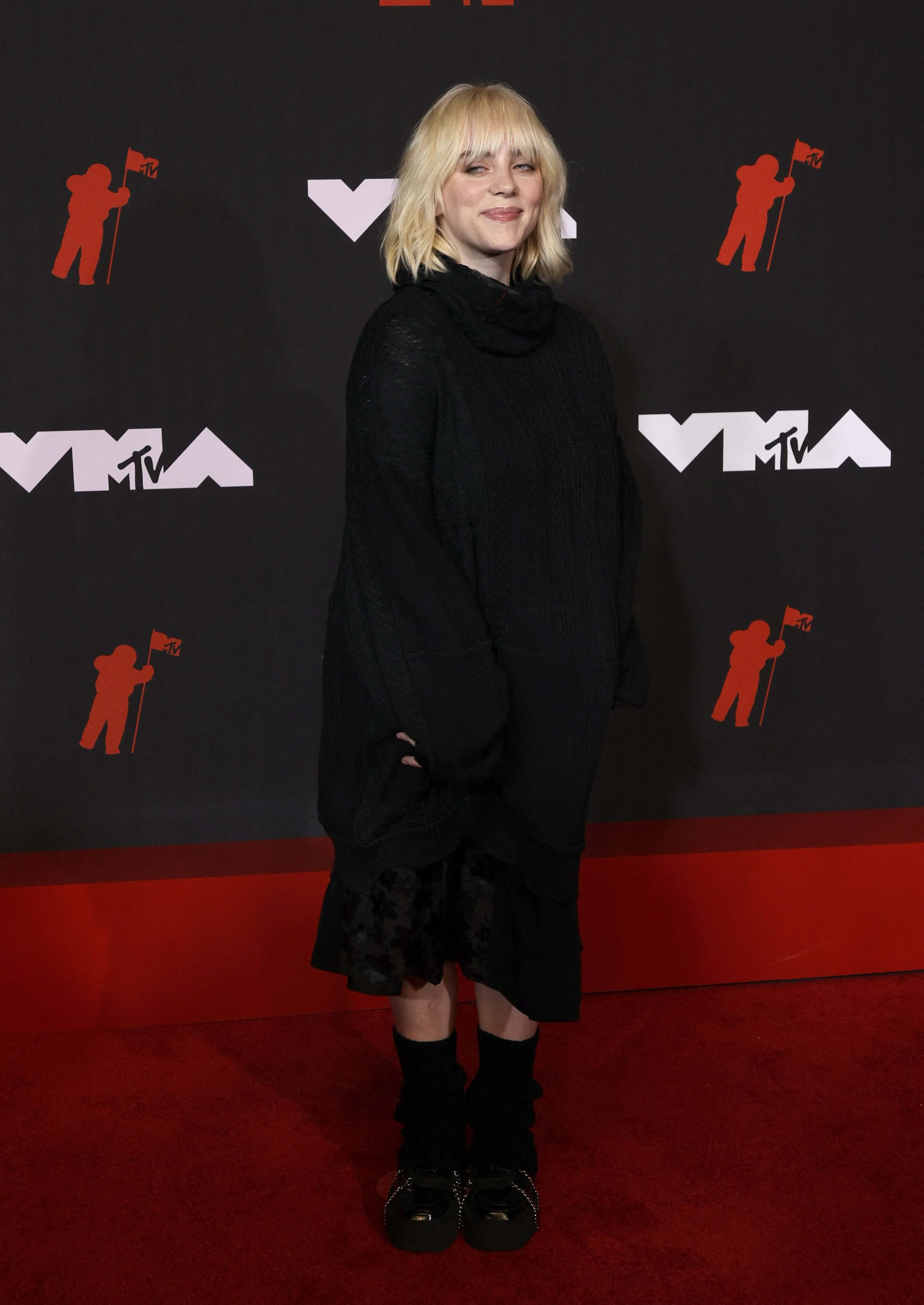 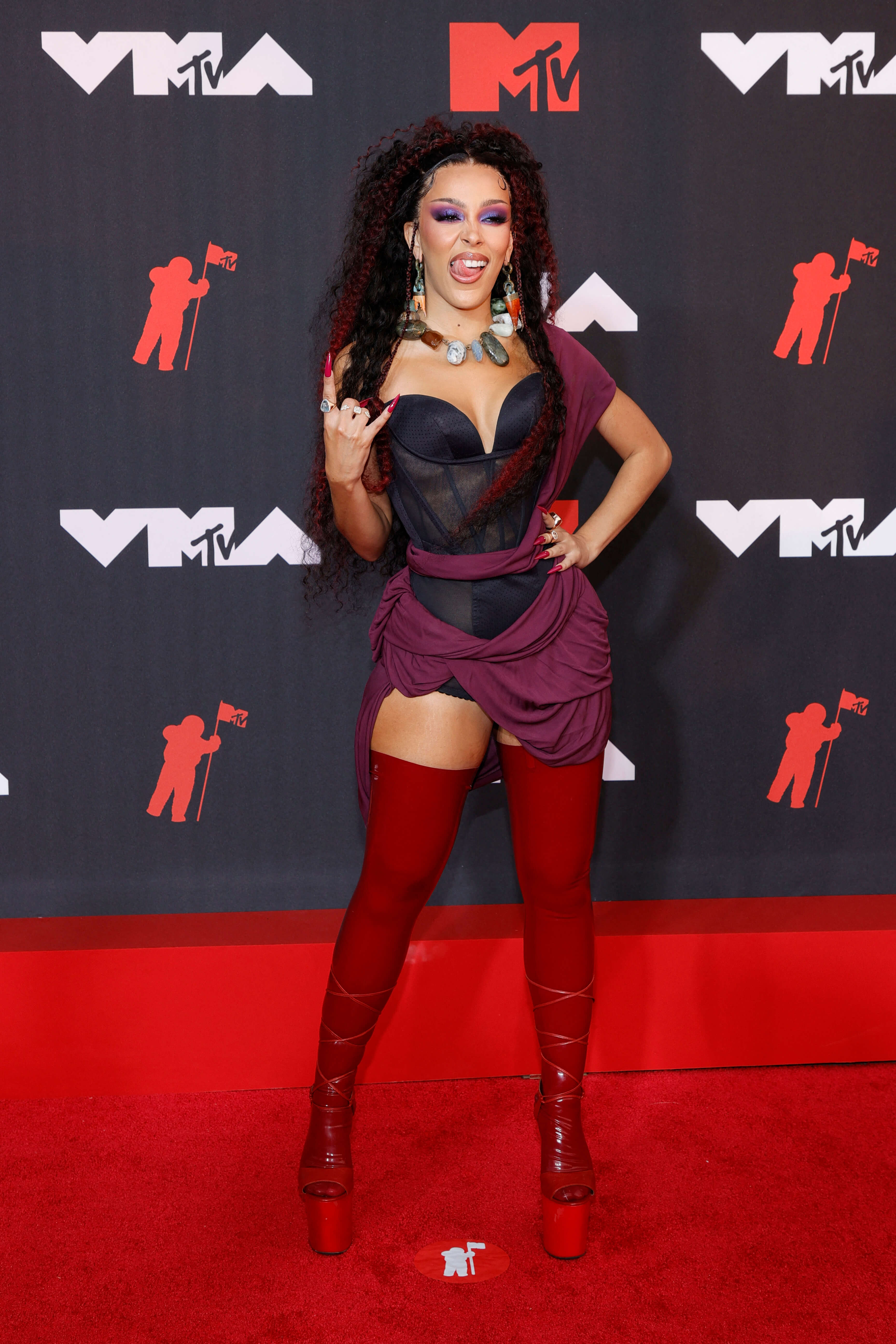 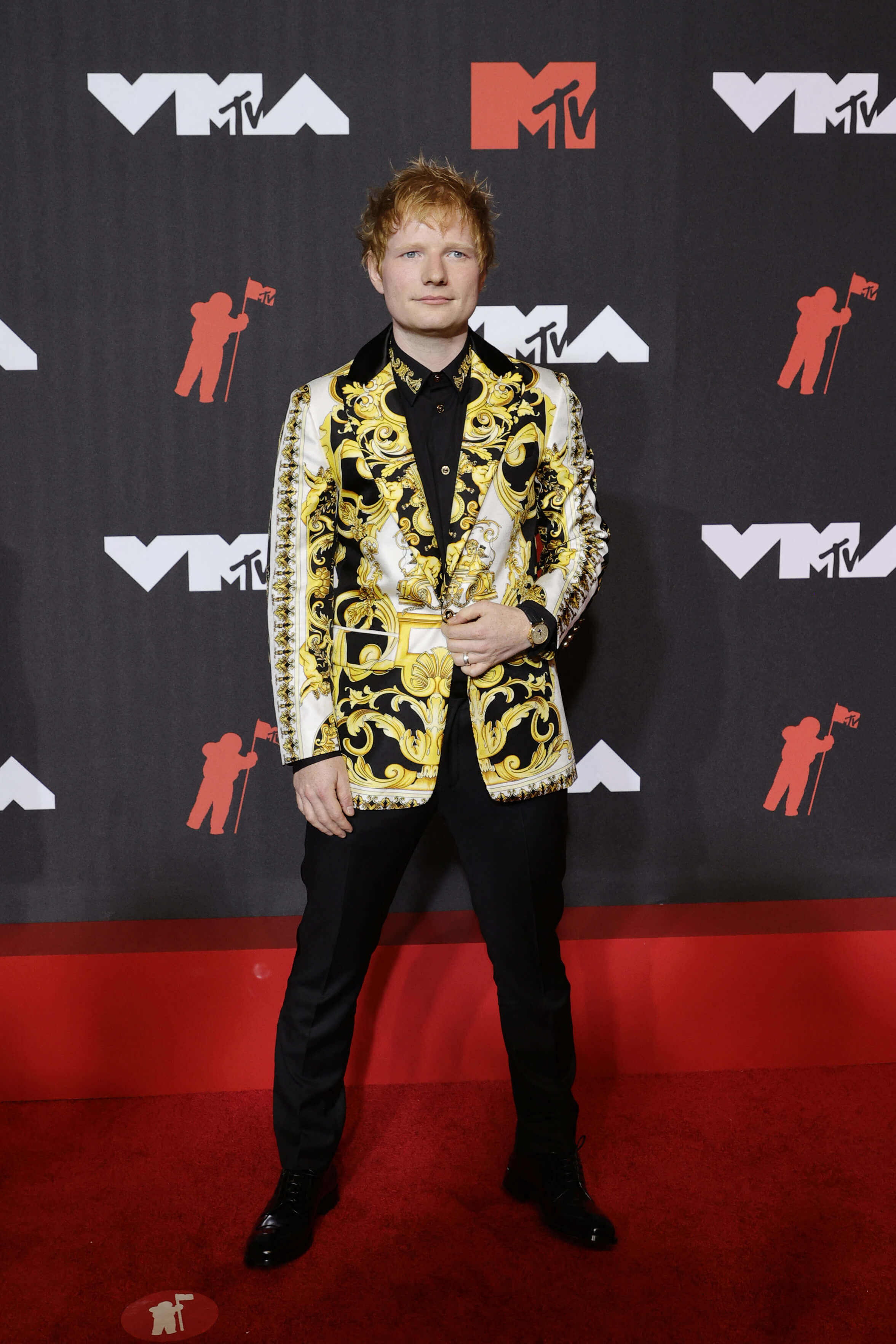 Ed Sheeran in Versace. Photo by Jamie McCarthy/Getty via AFP 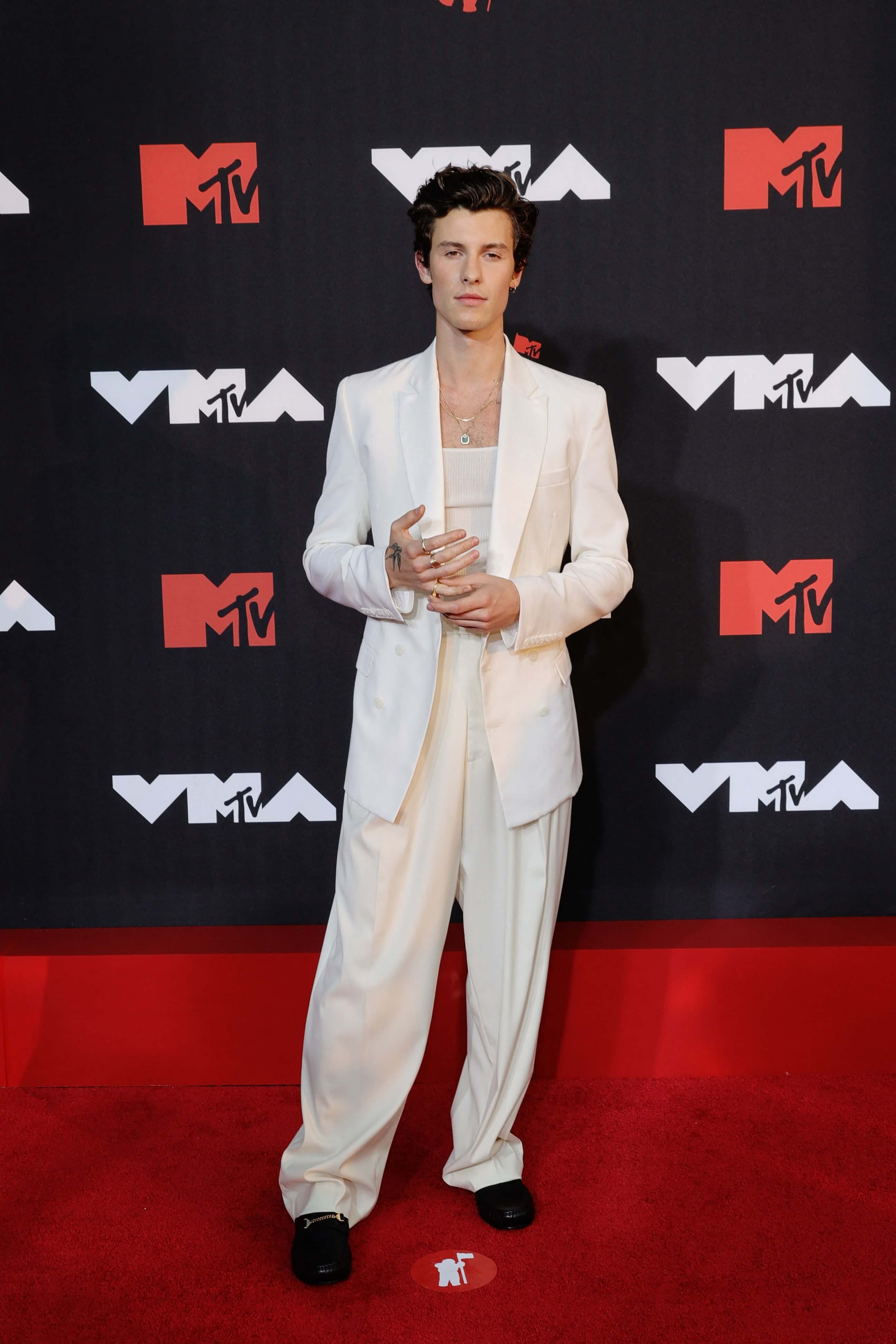 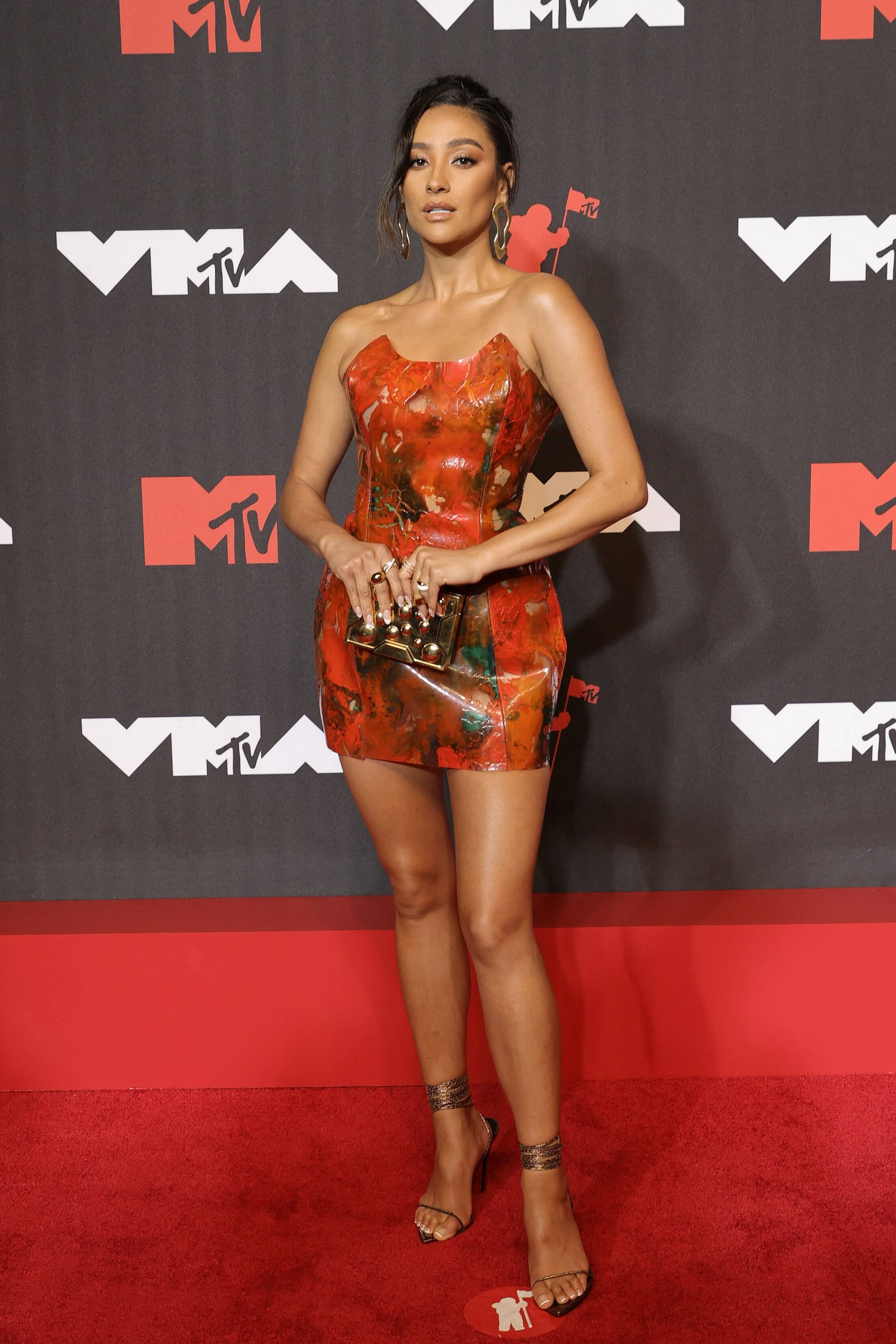 Troye Sivan in a cropped blazer and bottoms from Fendi's Spring/Summer 2022 collection. Photo by Jamie McCarthy/Getty via AFP

Ed Sheeran in Versace. Photo by Jamie McCarthy/Getty via AFP