Classic '90s shounen manga and anime Yu Yu Hakusho—more popularly known in the Philippines as Ghost Fighter—is getting a live-action series on Netflix, the streamer announced. 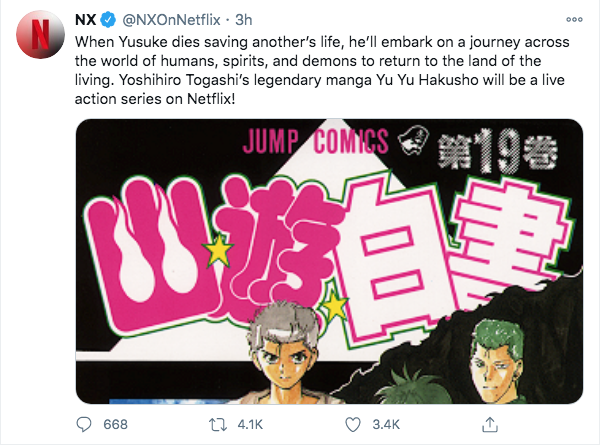 In a tweet posted Dec. 16, Netflix confirmed, “legendary manga Yu Yu Hakusho will be a live-action series on Netflix.” It will be distributed worldwide as a Netflix original series.

Netflix Content Acquisition Division director Kazutaka Sakamoto will be the executive producer and Teru Morii will produce, while ROBOT Co. Ltd. and Netflix will be jointly handling production, according to reports from Japanese website Comic Natalie.

Netflix has yet to reveal the cast, plot, release dates and other details surrounding the upcoming live-action adaptation.

“Growing up as the original generation, the enthusiasm and shock of that time remains as a vivid memory. Even after 20 years, the momentum has not slowed down, and as fans continue to spread throughout the world, including Asia, we will make the most of Netflix's highly flexible expression platform to create works. In addition to story development in each episode without scale restrictions, we are delighted to be able to maximize the charm of the magnificent worldview of the original by gathering the best teams from home and abroad,” shares Sakamoto.

Created by acclaimed manga artist Yoshihiro Togashi, all 19 volumes of the Yu Yu Hakusho manga sold over 49 million copies in Japan alone. A television anime adaptation ran from 1992 to 1995, gaining millions of fans across Asia and North America. The franchise also spawned two films and two original video anime (OVA) releases. A new OVA debuted back in October 2018 as of the anime's 25th Anniversary, while a manga-inspired stage play ran in Japan from August to September 2019.

In the Philippines, GMA-7 first aired a tagalized dub of the anime in 1999, with succeeding replays enjoying high viewership, years after the first telecast.