Neve Campbell has officially joined the next chapter of the Scream franchise, reprising her role as Sidney Prescott. The original “Scream Queen” will be joining fellow legacy stars David Arquette ( Dewey Riley) and Courteney Cox (Gale Weathers). New cast members include Jack Quaid (The Boys), Melissa Barrera (In the Heights), and Jenna Ortega (You).

Scream 5 is being directed by Matthew Bettinelli-Olpin and Tyler Gillett of the filmmaking group Radio Silence (Ready or Not, V/H/S) from a script written by James Vanderbilt (Murder Mystery, Zodiac, The Amazing Spider-Man) and Guy Busick (Ready or Not, Castle Rock). 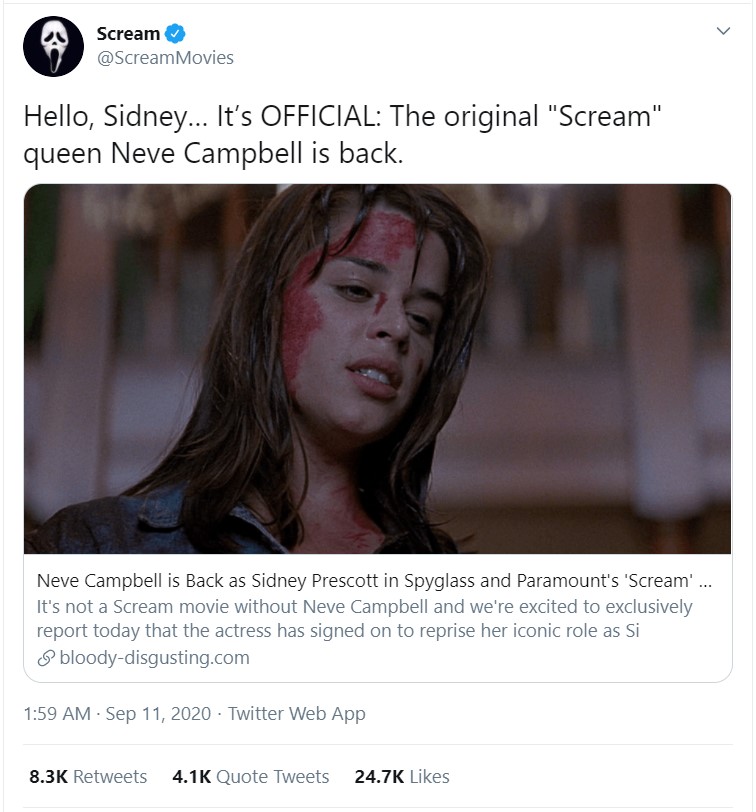 The long-running horror media franchise is made up of four slasher films directed by the late Wes Craven, a television series created by Kevin Williamson, various merchandise, and even a video game was developed for the fourth film.

The fifth Scream film has been characterized as a “relaunch” of the meta-horror series. According to news reports, the story plot “will follow a woman returning to her home town to try to find out who has been committing a series of vicious crimes.” That sounds about right.

In a statement, the directors said, “We’re pinching ourselves! It’s hard to express how much the character Sidney Prescott shaped our love of movies and to have the chance to work with Neve is truly a dream come true. It just wouldn’t be a Scream movie without Neve and we’re so excited and honored to join her in Woodsboro.”

Campbell previously expressed reservations about Scream 5 being made without Wes Craven in the director’s chair, but has since given the latest movie her blessing.

“After spending time speaking with Radio Silence, they have shown such love, respect and admiration for Wes Craven and all that he’s created in the Scream franchise. I am beyond excited to step back into the role of Sidney Prescott and return to Woodsboro,” said Campbell.

Campbell, Cox, and Arquette have appeared in the previous four films to date, along with Roger L. Jackson, who voices the iconic masked Ghostface. The killers in each film always wore the singature white plastic mask based on Edvard Munch’s painting The Scream.

The original Scream film released in 1996 was a major box office hit and has been largely credited with revitalizing the horror genre. It received critical acclaim along with Scream 2 which came out in 1997, but Scream 3 (2000) and Scream 4 (2011) received mostly mixed reviews. It's going to be interesting to watch the cast reunite in the fifth installment.

Producers were initially aiming for a 2021 release, in honor of the 25th anniversary of the first film, but production schedules were delayed due to COVID-19. Film production is expected to begin later this year in Wilmington, North Carolina.

Spyglass and Paramount Pictures is expected to release the film worldwide on January 14, 2022.

REVIEW: I watched 'Darna' on its first week run and this is what I thought