It’s been over a year since we’ve heard any concrete news about Netflix’s adaptation of Neil Gaiman’s beloved graphic novel series The Sandman.

Series creator Neil Gaiman dropped by DC’s FanDome event over the weekend to share some updates on the series, which is still in the works despite pandemic-caused production delays.

“Due to COVID, everything — as with every other piece of television being made around the world — has hit the pause button,” Gaiman said during the event. He added that The Sandman team has taken advantage of the delay “to get the scripts as close to perfect as we possibly could.”

Fans of the iconic dark fantasy series following Dream and the Endless siblings shouldn’t expect a fiercely loyal adaptation in the Netflix version.

Unlike the recently released full-cast Audible version of the first three volumes narrated by Gaiman and voiced by James McAvoy as Morpheus (the personification of Dream), the Netflix series would be "slightly looser, but still faithful." 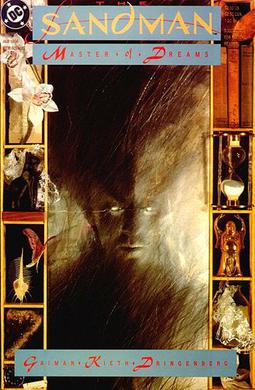 During The Sandman Universe: Enter the Dreaming panel at DC FanDome, Gaiman shared a rare update on where the Netflix series is in terms of development.

“Part of the joy of doing the audio adaptation was going, ‘This is the nearest thing we can do to an audio book of those first three graphic novels, and hopefully all the graphic novels,'” Gaiman said. “And we’re going to start it in 1988 and it’s going to end in 1992. Sandman is a very compressed story even if it takes place in all of time and space, that's where that story takes place. So, now what we're doing with Netflix is saying, 'Okay, the time this story starts is not 1988, it's now. If we’re doing it now, what would Sandman be?’ And that has been very liberating.”

In its original 75-issue run, The Sandman dove into surreal and intricately-built realms following the epic story arc of the Lord of Dreams and the rest of The Endless, the personification of Destiny, Death, Desire, Despair, Delirium (formerly Delight), and Destruction.

There have been multiple unsuccessful attempts to adapt the comic book series to film and television versions since the late 1990s, including a film version announced in 2013 with Joseph Gordon-Levitt slated to direct and star before he exited the project due to creative differences.

In June 2019, Netflix announced that they had completed a deal with Warner Bros. to develop Sandman into a live-action television series helmed by Wonder Woman screenwriter Allan Heinberg, with Gaiman and David Goyer serving as executive producers.

No release date has yet been set for The Sandman Netflix series. The Sandman audio drama, released on July 15, 2020 is now available to purchase on Audible.