Prepare for another social season! The incomparable cast of Bridgerton will officially return for a second season, with production returning in Spring of 2021.

A season renewal seemed inevitable, given the series' popularity around the world, but fans have been eagerly awaiting any news since the show's blockbuster Christmas debut. In its first four weeks, the show was streamed by more than 63 million households and reached the No. 1 spot overall in 76 countries.

The news comes straight from Lady Whistledown herself, and we all know that her word is as good as gospel. In the gossip column's latest "Society Papers", Lady Whistledown writes: "The ton are abuzz with the latest gossip, and so it is my honour to impart to you: Bridgerton shall officially return for a second season. I do hope you have stored a bottle of ratafia for this most delightful occasion."

"This author has been reliably informed that Lord Anthony Bridgerton intends to dominate the social season. I will have my pen ready to report on any and all of his romantic activities," she adds. 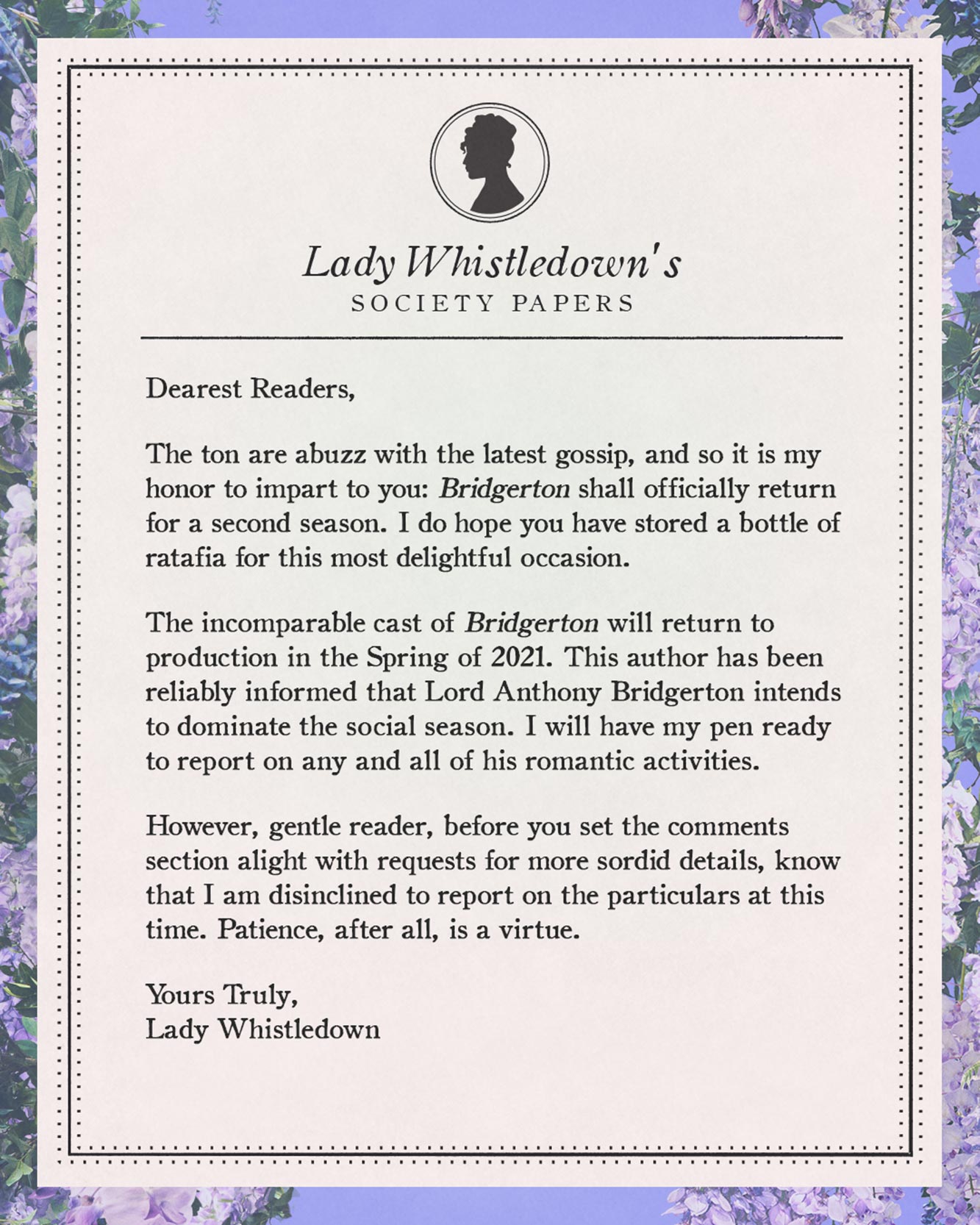 The show also confirmed the Netflix renewal on their social media channels on Thursday (Jan. 21).

Prepare for another social season. Bridgerton is returning for season two, only on Netflix. pic.twitter.com/yqapEULKz4

The Shondaland series, based on a series of romance novels by Julia Quinn, follows the wealthy Bridgerton family in Regency England. The novels tell the story of each of the eight siblings named in alphabetical order (Anthony, Benedict, Colin, Daphne, Eloise, Francesca, Gregory and Hyacinth) as they seek to navigate London's cutthroat marriage market and meet societal expectations.

‘Bridgerton’: A series review from a series reader

Season 1 centered on eldest Bridgerton daughter, Daphne (Phoebe Dyvenor), and her faux romance with Simon, the Duke of Hastings (Regé-Jean Page), which was the main storyline of the novel, The Duke and I (2000).

The first season also introduced viewers to an ensemble cast, including the rest of the Bridgerton clan, the gaudy Featheringtons, the haughty Queen Charlotte (Golda Rosheuvel), and anonymous gossip maven/narrator Lady Whistledown (voiced by Julie Andrews).

Based on Lady Whistledown's latest announcement, it seems like the second book in Quinn's series, The Viscount Who Loved Me (2000), will serve as the source material for season 2, focusing on Anthony and his romance with a new character, Kate Sheffield.

"The show was always set out to be primarily one book per season," showrunner Chris Van Dusen previously told Entertainment Weekly.

While the crucial role of Kate is still to be cast, it's great to know that production on a new season of the delightfully scandalous period drama is set to begin this Spring 2021.

Season 1 of Bridgerton is currently streaming on Netflix.

Heads up, artists! You can get a free Canva Pro subscription in this mega webinar for designers and freelancers