The whole month of October is usually associated with beer. While major beer events and festivals may have been cancelled this year, that doesn’t mean you can’t enjoy drinking at home.

Brewers are some of the biggest geeks out there, and some of them show their love for their favorite franchise by coming up with unique brews inspired by characters from movies and tv shows and various pop culture interests.

International beer brands that come to mind include Ommegang’s “Fire and Blood Red Ale” inspired by HBO’s Game of Thrones, Black Sheep “Monty Python’s Holy Grail Ale,” Holgate Brewhouse’s “Millenium Falcon Emperial IPA,” and even a whole range of Hobbit-themed beers inspired by The Lord of the Rings trilogy and The Hobbit. Unfortunately, most of these beers are only available internationally, making it more difficult or expensive for Pinoy beer lovers to get their hands on.

Thankfully, there are a few locally-brewed craft beers that also pay homage to pop culture interests. Here are our personal picks of Philippine-made craft beers that geeks will surely love.

Welcome to the dark side, we have beer! “Dark Vader Stout” brewed by Quezon City-based Elias Wicked Ales and Spirits microbrewery references a movie franchise everyone loves – Star Wars. This classic American Stout will appeal to anyone who prefers the darker side of the beer spectrum. It combines flavors of chocolate, caramel and coffee, making it an easy drinking dark beer. 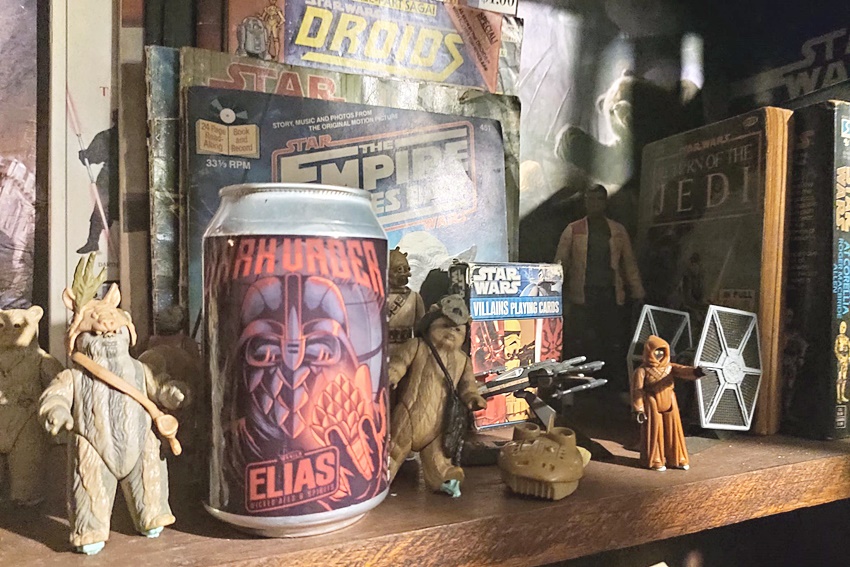 Enjoy drinking this while rewatching any of the Star Wars films or catching up on episodes of The Mandalorian at home. Aside from tasting great, the beer can also makes a nice addition to any shelf displaying Star Wars action figures and memorabilia. Even non-beer drinkers will probably want to buy this beer just for the label artwork alone.

Where to find it: Elias Wicked Ales & Spirits (open for dine-in, take out or delivery) is located at 13 Ubay, Santa Mesa Heights, Quezon City, Metro Manila, Philippines. You can buy beer directly from their website for home delivery all over Metro Manila. Price: P200 per can.

Most of the signature beers of Pedro Brewcrafters, a brewery based in San Pedro, Laguna, sport geeky references. The fun, personality-driven beers feature a quirky Zach Galifianakis look-alike character named Pedro who appears on all the labels. 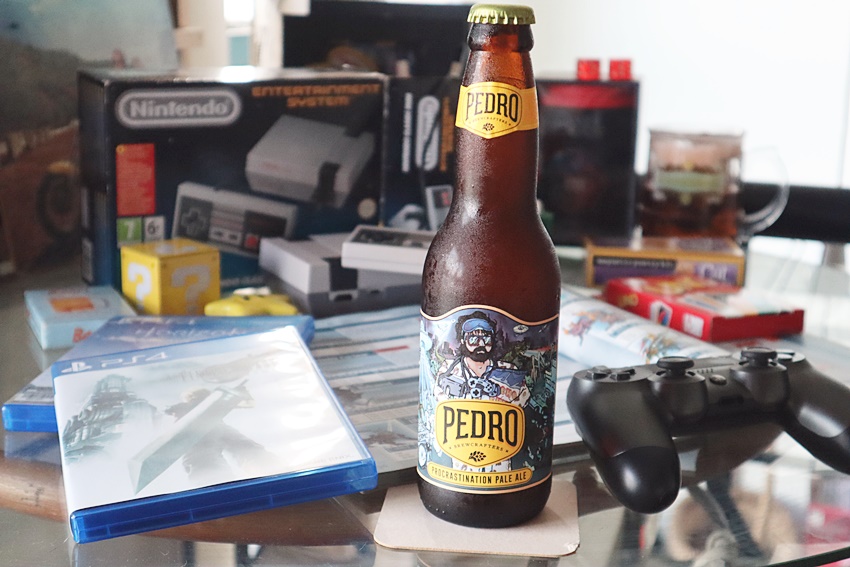 One of my personal favorites because I can relate to the name a lot is “Procrastination Pale Ale,” which features Pedro carrying a video game console and chips while surrounded by UFOs, zombies, Godzilla and other movie monsters.“Because whatever it is, it can wait,” says the label. We agree 100 percent.

With its potent herby aroma and bitter aftertaste, this beer is best savored slowly. It’s the kind of beer that can power you through late night gaming sessions while grinding levels, or help you face off with a particularly hard boss.

Where to find it: Pedro Tap House is located at 5910 Matilde Street, Poblacion, Makati, Metro Manila. Beers are available for home delivery all over Metro Manila. Aside from ordering 4-packs and 24-bottle cases directly from them on Instagram, the beers are also available by the bottle through the website RunPedro, an online premium food store. Price: P140 per bottle.

I’ve always equated good beer with a health or mana potion. Beer can revive you after a long and tiring day at work, raise your spirts during the middle of the week, and recharge you fully during the weekends. 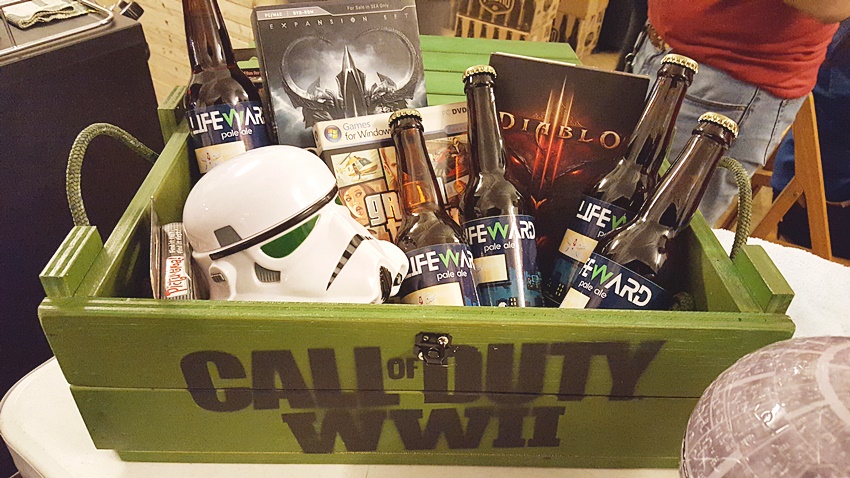 Lifeward Pale Ale offers “a blend of fruity-sweetness and bitterness that will definitely bring you back to life and keep you beating amidst the everyday battle.” The drink itself is pretty balanced and sessionable, offering easy drinking for those lazy afternoon gaming sessions. We could all use a full healing potion to tackle the harsh reality of the real world, especially these days.

Where to find it: Typically found only during craft beer events and bazaars like the MNL Beer Festival, Beer Bros. Craft currently seems to be on hiatus based on the non-activity of their Instagram account, but hopefully, we’ll see them around again soon.

The name and artwork on these beers will immediately appeal to comic book fans and anyone fascinated by stories of myths and legends. Alamat is the Filipino word for legend or myth, and all of Alamat Craft Brew’s beers are dedicated to Philippine Cryptozoology, Folklore and Mythology. 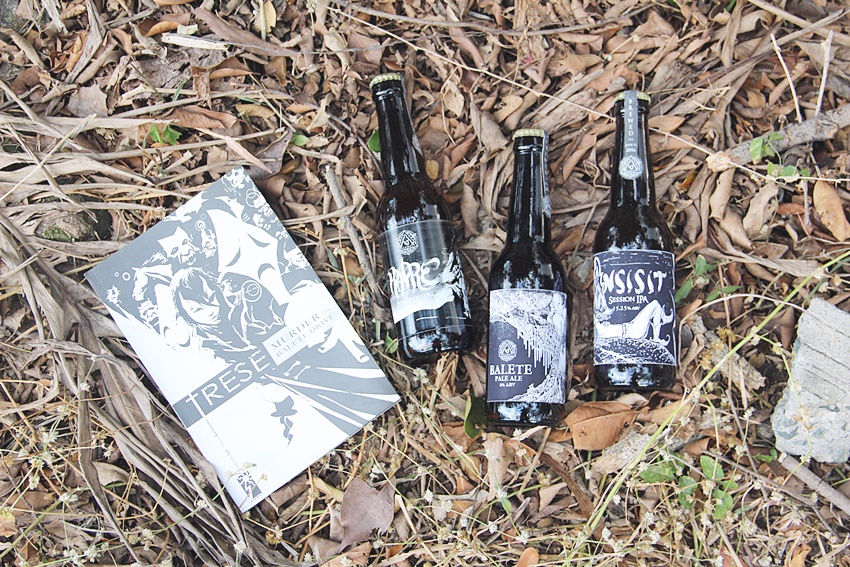 The beers, which sport graphic black and white comic-book style artwork on the labels, are brewed by a group of artists (UP College of Fine Arts, and UP College of Engineering Alumni with rock and metal bands). The group started homebrewing in Quezon City in 2015 and has since established a secret lair named Biringan in Marikina.

The intensely strong and distinctive beers (like Balete Pale Ale, Kapre Roasted IPA, and Mambabarang Imperial Black IPA) also feature interesting background stories about the mythological creatures they are named after like the Kapre, Manananggal, Bakunawa and more on their labels.

These beers may just inspire you to delve deeper into the dark world of Pinoy folklore and read more mystery, fantasy and horror comics and graphic novels like Trese, The Mythology Class, and Ella Arcangel.

Where to find it: Alamat Craft Brew is based in Marikina City. Contact them directly on Instagram for inquiries. Price: Varies per bottle.

Alien invasions and extraterrestrial activities are a favorite pop culture subject, as seen in the popularity of films and television series like The War of the Worlds, E.T. The Extra-Terrestrial, Lost in Space, Galaxy Quest, Mars Attacks!, and more.

Nipa Brew’s Expedition series, crafted in collaboration with The Professor’s Brew, offers more exciting and bolder flavors than your typical mainstream beers. The bottles feature comic-book pop art style labels and tongue-in-cheek names, that will remind you of your favorite Sci-Fi space flicks. 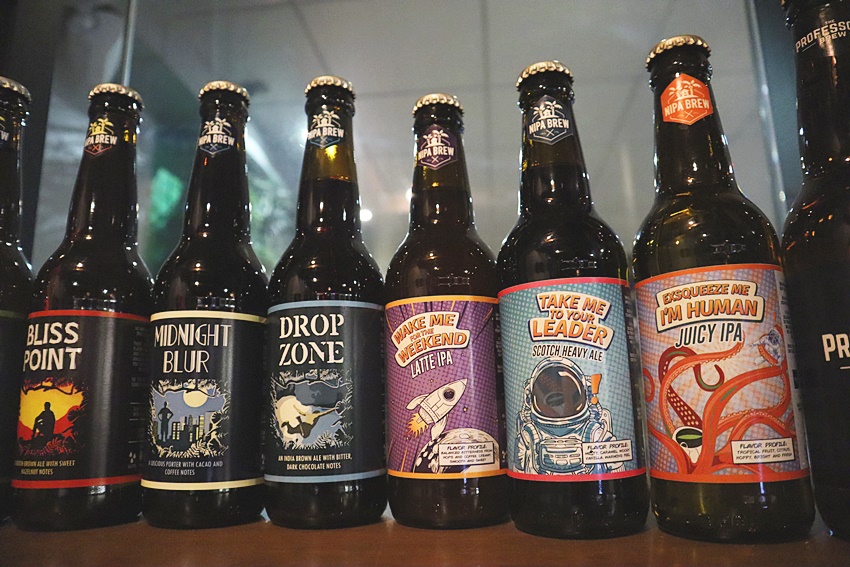 “Exsqueeze Me I’m Human” is a Juicy IPA that offers “a superb balance between too juicy and not juicy while still packing a punch.” The beer is citrusy and fruity with a light bitterness. “Take Me to Your Leader” Scotch Heavy Ale is a malty Scotch Ale with an enjoyable vanilla taste and slight bitterness. At nine percent ABV, this one is not for the fainthearted, but is great if you want to take a load off after a busy workweek. “Wake me for the Weekend” Latte IPA offers balanced bitterness from hops and coffee, with a creamy, smooth and sweet flavor profile.

While the beers may take you on an “out of this world” journey, don’t worry, they come in peace!

Where to find it: Nipa Brew Taproom & Brewhouse (open for dine-in, take out or delivery) is located at 9639 Kamagong, San Antonio Village, Makati, Metro Manila. You can also get beer delivered at home by filling up their online order form or get assorted 4-packs through their online shop on Shopee. Price: P195 per bottle.

Mixtape Pale Ale is another awesome brew from Elias Wicked Ales & Spirits based in Quezon City. This beer which highlights a retro cassette tape on the label is “an ode to the greatest soundtrack of our memories.” 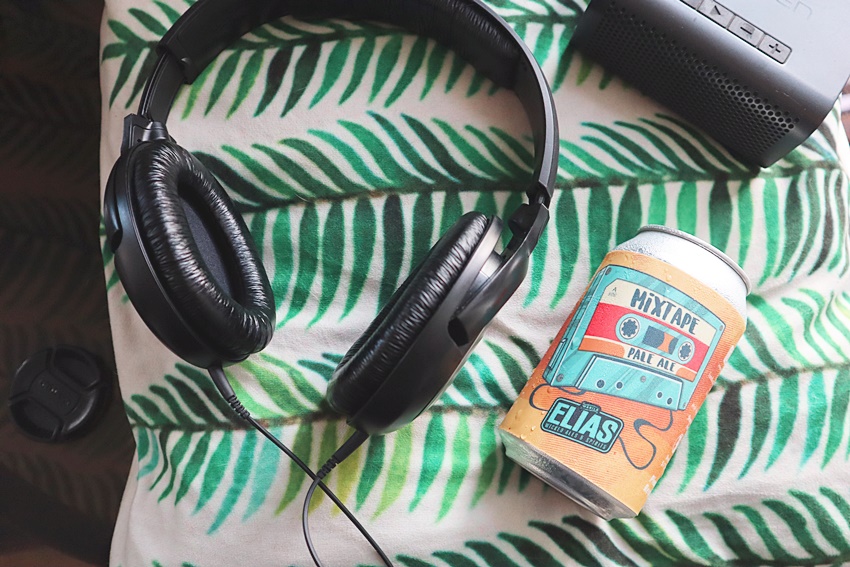 The American Pale Ale is a medium-bodied beer with a good balance of hop bitterness and malt sweetness making it a crisp and refreshing beer to to enjoy at any time of the day. It’s the kind of feel-good beer that will take you back to simpler times and something you can enjoy drinking at home while listening to Guardians of the Galaxy: Awesome Mix Vol. 1 or 2 or your favorite film soundtrack playlist on Spotify.

This particular beer was created to support the brewery’s DJs, and each beer release comes with actual music released on SoundCloud. A good choice for your next online e-numan bonding session with friends.

Where to find it: Elias Wicked Ales & Spirits is located at 13 Ubay, Santa Mesa Heights, Quezon City, Philippines. You can buy beer directly from their website for home delivery all over Metro Manila. Price: P180 per can.