In the midst of Typhoon Ulysses that left parts of Luzon, including Metro Manila, submerged in floodwaters and without power Thursday, Filipino celebrities used their social media platforms to spread important information for rescue and relief operations, offer prayers and call for help for those who are greatly affected by the typhoon.

Jericho Rosales and wife Kim Jones even went as far as getting on the ground and using their surfboards to help the people in their community of Barangay Tumana in Marikina City, who were trapped in their homes as floodwaters quickly rose Thursday morning.

In an interview with ABS-CBN, Jericho said he and his wife decided to help the rescue team when they saw the flood situation in their village. He said that usually, when their area gets flooded, there are no boats or flotation devices available on hand so they decided to bring out their surfboards.

During the onslaught of tropical storm Ondoy in 2009, Rosales also lent a helping hand in the rescue operations using his surfboard.

The night passed and our country is on its knees again. Father in heaven, we ask for your mercy and grace at this time. Our countrymen need you to guide us through this major calamity. We lift up our leaders and all abled citizens to you and may your holy spirit lead us to the path to recovery. It will be long and hard but we can only do this with you. In Jesus’s mighty name. Amen.

Meanwhile, Gary Valenciano, Gerald Anderson and Ogie Alcasid used their Instagram platform to send prayers for those who are affected by the calamity, and for the country’s path to recovery.

So many helpless filipinos right now.. I can only send out my prayers for now.. Please stay safe and strong ??

Lord...you know what’s in our hearts for all these people who are struggling and have lost so much. Now that the rain has weakened, strengthen Your reign upon this calamity. #marikina #ulyssesph

Later in the afternoon, Gary also posted a video of him wearing his biking gear on Sumulong Highway (which was not passable at the time) to check the situation and give an update for his followers who live in the area. 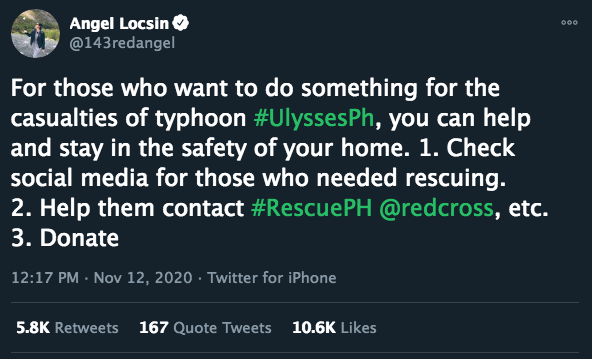 Actress Angel Locsin urged those who want to help the casualties of Typhoon Ulysses to check on social media who needed help, be of help to those in need by contacting the proper authorities, and donate.

She also posted on Instagram emergency numbers and information for those who wanted to donate.

Kakie Pangilinan organized a Twitter thread for people who need help using the hashtags #RescuePH and #UlyssesPH. She also retweets important information like the location of people who are still stranded atop their homes, still flooded areas and missing persons. 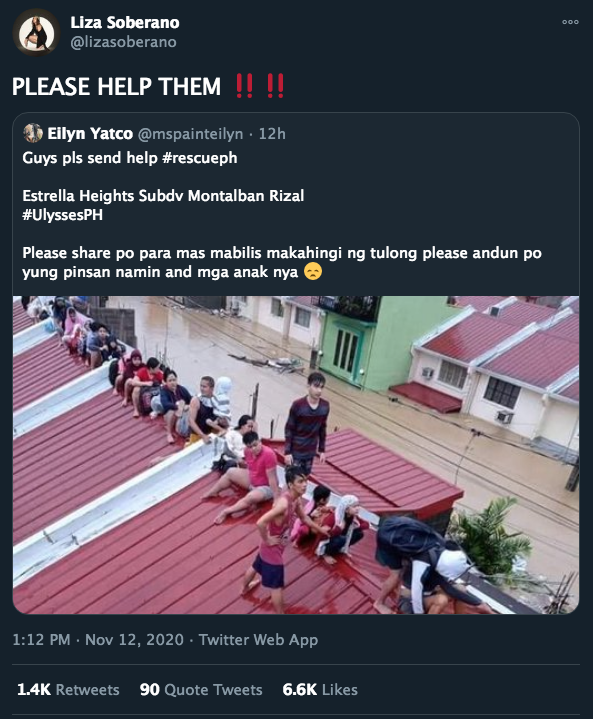 Liza Soberano retweeted a photo of people stranded on the roof of their houses in Montalban, Rizal and pleaded to the public and her followers for help. 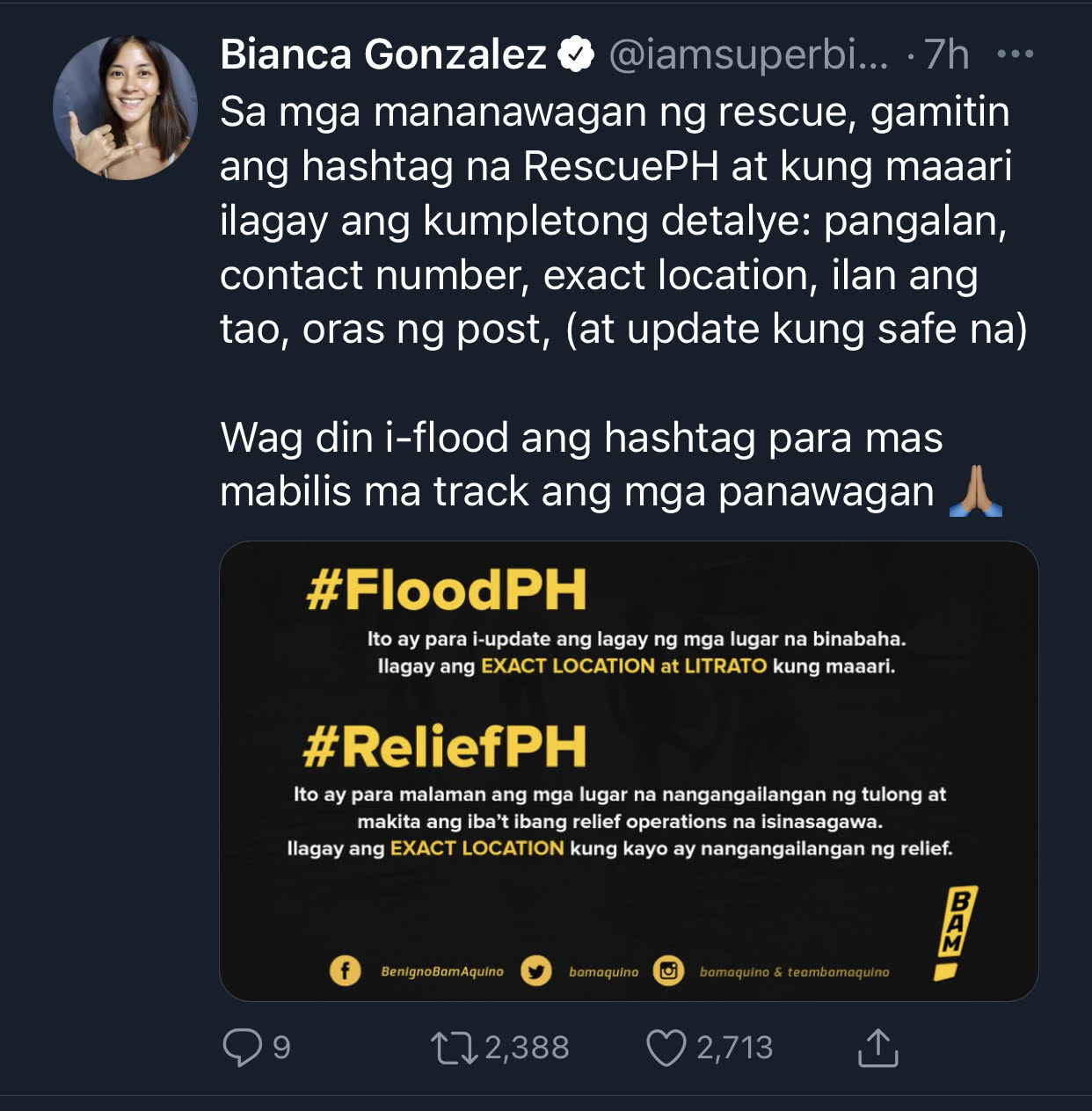 Host Bianca Gonzales-Intal has been tweeting and retweeting the whole day information about the situation around Metro Manila, where to donate, and where to volunteer. She also emphasized on a tweet that for those who call for rescue on Twitter, it is important to use the hashtags #RescuePH, #FloodPH, and #ReliefPH and include their complete details. Bianca reminded the public not to flood the hashtags so rescuers could track easily those who need help. 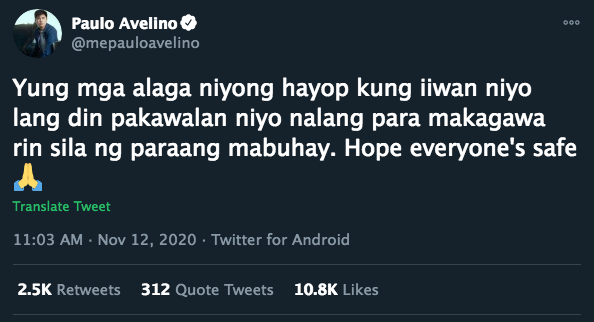 Actor Paulo Avelino took to social media to ask pet owners who will not be able to take their pets during evacuation to unleash them so their pets would get their chance to survive. Today, PAWS Philippines deployed its disaster team to Provident Village in Marikina to assess, rescue and offer assistance to pets and pet owners whose homes were devastated by the typhoon.

Actor Rocco Nacino, a Philippine Navy reservist, used Twitter to help retweet emergency hotline numbers and addressed people who tweeted him and extended his help. He tweeted that he was in talks with the Philippine Navy on how he can help with the relief and rescue operations, and wished for everyone’s safety.

According to PAGASA during a press briefing late Thursday afternoon, typhoon Ulysses is already 200 kilometers west of Iba, Zambales. As it moves west at 25 kph, it may exit the Philippine area of responsibility Friday morning.

PLDT and Smart commit to keeping Filipinos connected amid the pandemic