A literary revival seems to be sweeping the world as Netflix adapts bestselling books to the small screen, sparking interest in their original source material.

Many popular shows that have hit it big including The Queen’s Gambit, Bridgerton, Lupin and Firefly Lane are all based on books.

In a recent article posted on Netflix’s official website, the streaming service noted that as certain shows grow in popularity, their print origins have found new audiences through bestseller lists, book clubs and more.

It noted that half of the Top 10 titles on The New York Times Best Sellers list in February 2021 were books tied to Netflix series. 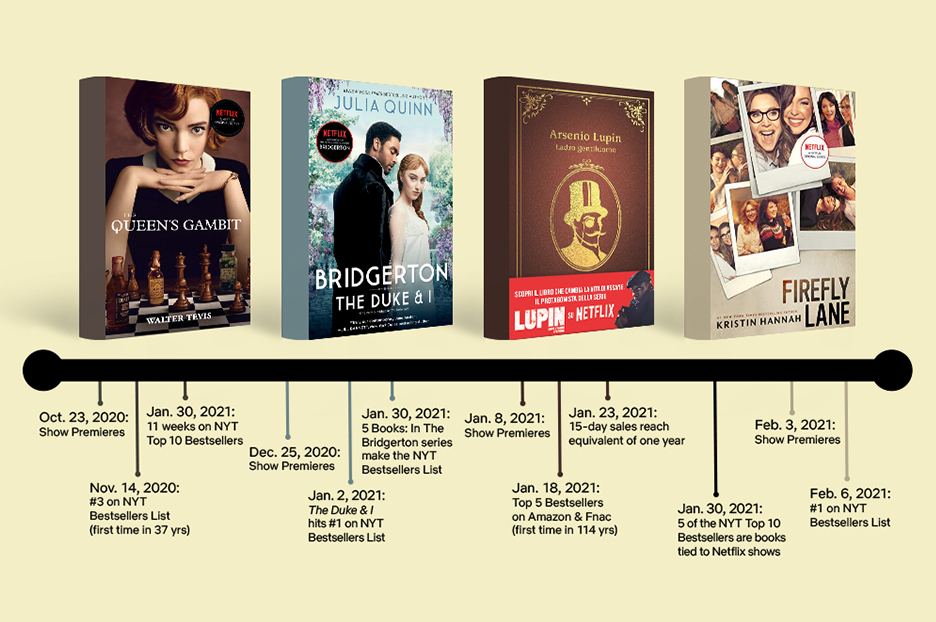 Julia Quinn’s Bridgerton novels, originally published from 2000 to 2013, boomed in popularity since the show became Netflix’s biggest series, with five novels from the series landing on the New York Times Best Sellers list, and The Duke and I, which the first season of the show was based on, holding steady at #1 for four weeks.

The 1983 novel The Queen’s Gambit by Walter Tevis exploring the life of fictional female chess prodigy Beth Harmon appeared on the list for the first time since it was published 37 years ago, just three weeks after the limited series starring Anya Taylor-Joy premiered. The novel went on to stay in the Top 10 for 11 weeks according to the streamer.

After Lupin premiered, Maurice Leblanc’s original book about the gentleman thief and master of disguise Arsène Lupin which was first published over a century ago back in 1905 began trending in several countries such as Italy, Spain, the US, the UK and Korea, with sales reaching the equivalent of one year’s worth in just 15 days. Ten days post-premiere, the book ranked in the Top 5 bestsellers on Amazon and Fnac.

Recently Kristin Hannah’s book Firefly Lane, a powerful story of two women and the friendship that becomes the bulkhead of their lives, first published in 2008, appeared on the Top 10 list a month ahead of the show’s release on Netflix. The book hit #1 just three days after its Netflix premiere, and 13 years after its first publication.

Book sequels in series such as Beth Reekles' The Kissing Booth 3, Caroline Kepnes’ You, Robyn Carr’s Virgin River and Sherryl Woods’ Sweet Magnolias are forthcoming with new seasons or films on Netflix.

What other books could see renewed interest because of Netflix shows? Get a headstart on your reading list with these noteworthy adaptations coming soon to Netflix.

Fed up with the sexist and toxic status quo at her high school, a shy 16-year-old finds inspiration from her mother’s rebellious past and anonymously publishes a zine that sparks a school-wide, coming-of-rage revolution. This comedy directed by Amy Poehler based on the 2017 novel of the same name by Jennifer Mathieu premiered on March 3.

Shadow and Bone is a fantasy adventure and debut novel written by American author Leigh Bardugo first published in 2012. The novel is narrated by Alina Starkov, a teenage orphan who grows up in the Russia-inspired land of Ravka before her entire life changes when she unexpectedly harnesses a power she never knew she had to save her best friend. It is the first book in the Grisha trilogy followed by Siege and Storm. The Netflix series adaptation is coming on April 23.

The Woman in the Window

All Things Cease to Appear

Things Heard & Seen set to premiere on April 30 on Netflix is based on Elizabeth Brundage’s All Things Cease to Appear (2016). The novel is decribed as "a dark, riveting, beautifully written book that combines noir and the gothic in a story about two families entwined in their own unhappiness, with, at its heart, a gruesome and unsolved murder."

Fear Street is an upcoming American horror film directed by Leigh Janiak and based on the teenage horror fiction series of the same name by American author R.L. Stine (the same author behind Goosebumps), which started in 1989. It is set to become the first film in a trilogy that will be released one month after another on Netflix this summer. The Fear Street books take place in the fictionalized city of Shadyside, and feature average teenagers who encounter malignant, sometimes paranormal, adversaries.

The Last Letter From Your Lover

Based on the bestselling book by JoJo Moyes which sold over three million copies globally, The Last Letter From Your Lover tells a pair of interwoven stories set in the present and past. The film adaptation follows Ellie Haworth (Felicity Jones), an ambitious journalist who discovers a trove of secret love letters from 1965 and becomes determined to solve the mystery of the forbidden affair at their center.

Concrete Cowboy is an upcoming series based on Gregory Neri’s Ghetto Cowboy, a street-smart tale published in 2011 about a displaced teen who learns to defend what's right—the Cowboy Way. While spending the summer in North Philadelphia, a troubled teen is caught between a life of crime and his estranged father’s vibrant urban-cowboy subculture.

Mikki Daughtry and Tobias Iaconis (Five Feet Apart and The Curse of La Llorona) are adapting the horror-fantasy children’s book Nightbooks by J.A. White for Netflix. Nightbooks follows Alex, a boy obsessed with scary stories, is trapped by a witch in her modern, magical New York City apartment, his original hair-raising tales are the only thing keeping him safe as he desperately tries to find a way out of this twisted place.

Maid: Hard Work, Low Pay, and a Mother's Will to Survive

Inspired by the powerful New York Times best-selling memoir Maid: Hard Work, Low Pay, and a Mother’s Will to Survive by Stephanie Land, Maid is an upcoming Netflix series that will chronicle a single mother who turns to housekeeping to—barely—make ends meet as she battles against poverty, homelessness, and bureaucracy. Told primarily through her point of view, Maid will be a beautiful, alive, gritty, and inspiring exploration of poverty in America.

(Images via Netflix and Amazon)

Heads up, artists! You can get a free Canva Pro subscription in this mega webinar for designers and freelancers