Netflix has released the first trailer of He’s All That, the gender-swapped remake of ’90s teen flick She’s All That. The film coming to Netflix later this month stars TikTok superstar Addison Rae and Cobra Kai’s Tanner Buchanan.

In this modern retelling, Rae plays Padgett Sawyer, an influencer and leader of the popular “in” crowd out for revenge following a humiliating fallout with her boyfriend captured online. Rae's character accepts a challenge to turn Cameron Kweller (Buchanan), the obviously attractive social outcast with amazing abs, into prom king.

Cook, now 41, returns to play Rae’s mom in the contemporary story set in the age of social media.

The style of the film's promotional poster pays tribute to She's All That, while the trailer uses a remixed version of Kiss Me by Sixpence None The Richer, which soundtracked the original film. Katy Perry's Electric will reportedly be on the soundtrack of the Netflix movie. 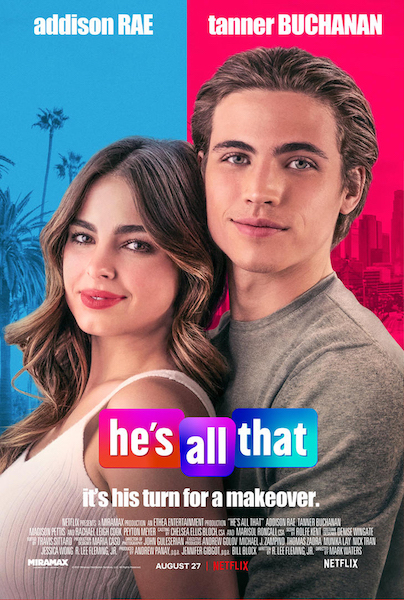 Those who loved the ’90s classic film, teens familiar with Addision Rae’s work online, and fans of karate champ Robby Keene on Cobra Kai will probably make this a trending show on Netflix when it drops later this month.

Check out the trailer below.

He's All That will stream on Netflix on August 27th.