Singer Billie Eilish was recently in hot water after an old video clip surfaced online, where she appears to be mouthing an anti-Asian racial slur.

The 19-year-old Grammy winner took to Instagram Stories to write a lengthy statement, saying she was “13 or 14” at the time the video was recorded and she did not know the word was derogatory.

“I love you guys, and many of you have been asking me to address this. And this is something I WANT to address because I am being labeled something that I am not,” Eilish began her statement.

The Lost Cause singer was pertaining to an edited video compilation that has been widely shared and reposted on TikTok.

In one of the clips, Eilish is seen mouthing an Asian slur, which is part of the lyrics of rapper Tyler, the Creator’s 2011 song Fish.

“I am appalled and embarrassed and want to barf that I ever mouthed along to that word as it was never used around me by anyone in my family,” she explained. “Regardless of my ignorance and age at the time, nothing excuses the fact is that it was hurtful. And for that I am sorry.”

In a separate clip, still part of the video compilation, Eilish is filmed seemingly imitating different accents, which viewers pointed out.

With regard to the said clip, Eilish explained that she was speaking in a “silly gibberish made up voice,” which is something she has done since she was a child.

“It is absolute gibberish and just me goofing around, and is in NO way an imitation of anyone or any language, accent, or culture in the SLIGHTEST.”

She also said she didn’t mean for her actions to hurt others and it “absolutely breaks my heart.”

She concluded her statement, writing, “I not only believe in, but have always worked hard to use my platform to fight for inclusion, kindness, tolerance, equity and equality. We all need to continue having conversations, listening and learning.” 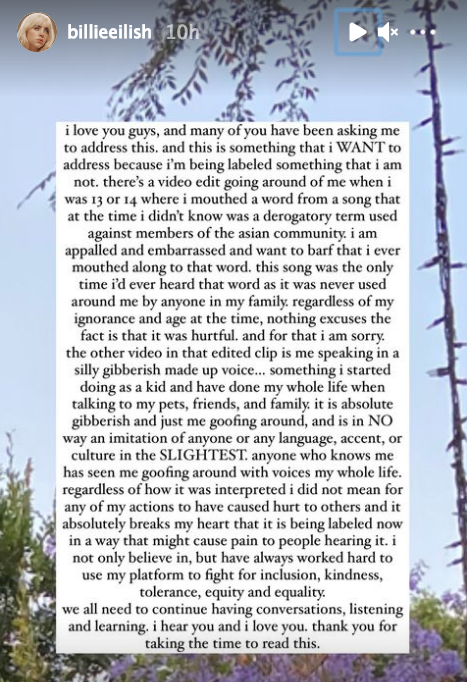 Recently, People reported that Matthew Tyler Vorce, whom Eilish is reportedly dating, apologized for his past racist and homophobic social media posts that resurfaced online.

The 29-year-old wrote on Instagram, "I want to apologize for the things that I wrote on social media in the past. The language I used was hurtful and irresponsible and I understand how offensive those words are. Whether it was a lyric, a quote, or just me being dumb, it does not matter."

"I am ashamed and deeply sorry that I used them in any context. It is not how I was raised and it is not what I stand for," he continued. "I shouldn't have used this language in the first place and I won't use it again. I am so sorry for the hurt I have caused," he said.