Beneath the skin of director Jordan Peele’s third movie something writhes with discontent. Something pregnant with meaning that the old dead white poet Yeats articulated as slouching “towards Bethlehem.”

The characters in Nope ask two very crucial questions as they grapple with a brutish force oppressing them: How do we survive it? But more importantly: How can we also maybe get rich off of it?

There are plenty of minor spoilers that would just completely ruin the movie’s many plot twists and turns, but also by telling you the story setups I will also inevitably spoil the clever references that Peele has scattered throughout the movie like Easter eggs —there’s plenty of those, no doubt, both the eggs and the motif of cleverness, so much that you may almost want to hit Peele upside the head or buy him a beer after viewing even if you’re a fan and tell him, well you’re certainly a clever boy, aren’t you?!

So we won’t do any of that. What this review will do is arm you with as much of what you need to know to get your butt to a theater, enjoying the heck out of something that you must see. Especially if you like science fiction. But more so if you like horror sci-fi. Preferably at an IMAX theater (because it’s shot damn beautifully).

The title is a reference to the asinine way characters in horror movies usually act. It’s about the stupid decisions they need to make to advance story. You know, these insensible, totally anti-survival decisions they take just because it’s a horror trope that has spread beyond the Dumb Blonde or the Incredibly Brave Yet Dim Jock.

Did someone see a clawed and hoofed shadow inside a spooky room with the door creaking slightly ajar? Let's go inside! Did some spooky old crone near the crossroads cryptically warn the young and attractive gang of characters to NOT go into the woods and stay in the rustic cabin? Gang still goes to said cabin. There’s even a niche of horror movies lampooning these tropes, especially the No Intercourse Rule that always gets broken because, well, sex and death are inextricably intertwined, more exciting in dangerous settings especially when there’s a chainsaw-wielding killer on the loose.

To all these stupid choices with red flags, flashing warning signs, and clear symbols that might as well be illustrated with a spiky biohazard motif, the two main black characters simply shake their head and say “Nope!” 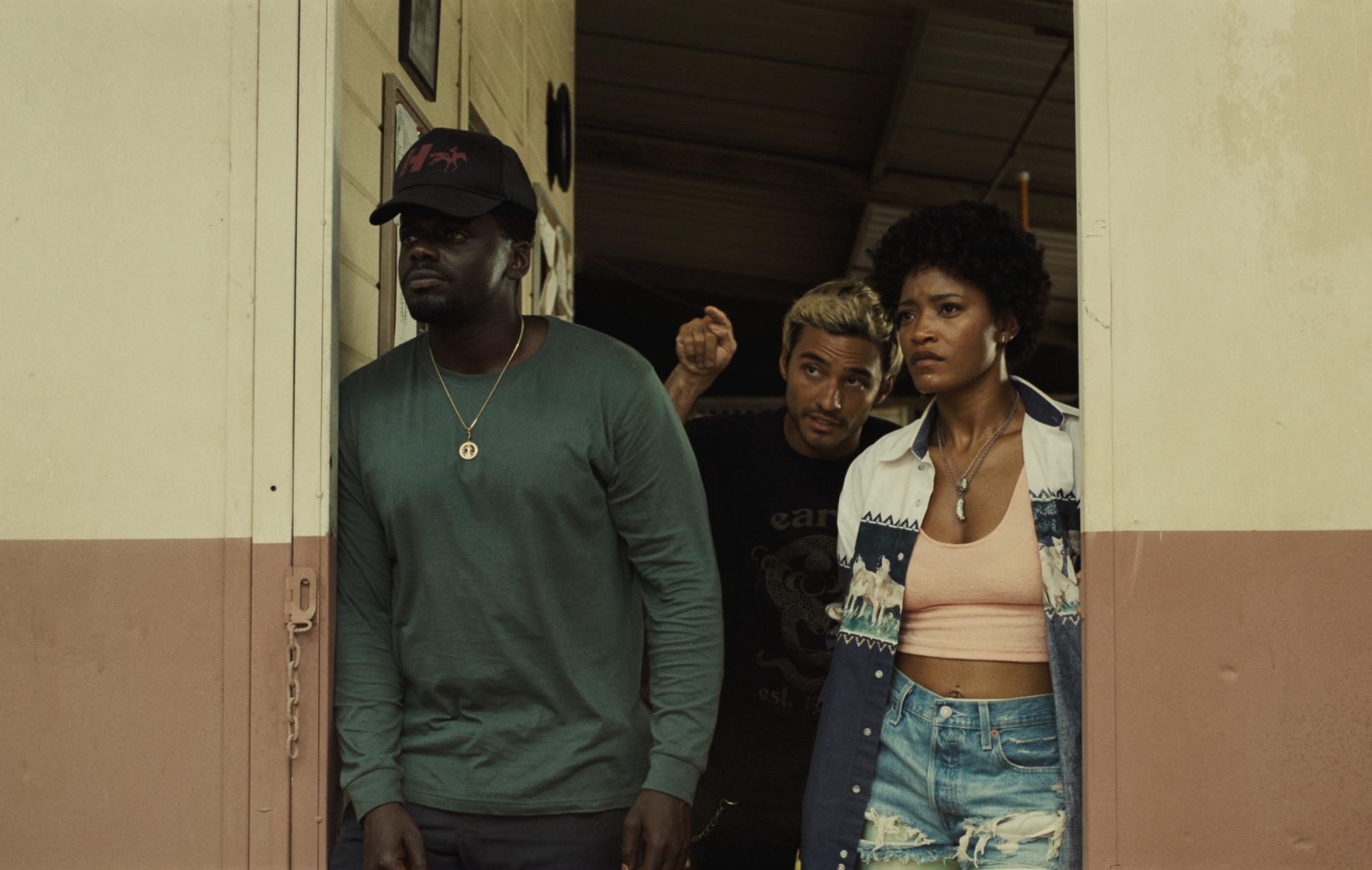 Instead of taking the option that makes the viewers call out to the screen and shout “Don't Do It!” Daniel Kaluuya as “OJ” Haywood Jr and Keke Palmer as Em Haywood just retreat out of the situation. They make the smart, obvious decision. This also enables them to live longer, carry out their mission, and enrich Peele’s story of black folks caught in a dangerous, absurd situation.

Nope’s first act is all about a family drama. We are treated to a setup involving an accident on-set at the sitcom of Gordy’s Home, a comedy about an American family who has adopted a chimpanzee. The titular animal actor has been stressed out and finally snaps, startled by the pop of a balloon. The ape goes amok and attacks the stars and crew, killing quite a few of them. This scene will figure quite prominently later, but for now Peele sets the mood of savagery to come. There’s a seething primalism on the sitcom that broke, previously believed to be held in check by domestic pleasures and civilized monotony.

From the bloody set of Gordy’s Home in 1998, we fast forward decades later, to the vast fields of the ranch of Haywood’s Hollywood Horses. Otis Haywood Sr (Keith David) has provided equine stars and animal trainer support for movies and commercial film sets in California for many years.

On a day with clear skies that looks to be blandly routine, he’s putting one of their horses to its paces and making small talk with his son OJ about the family business when something incredibly strange happens. In a freak accident, Otis Sr dies in front of his son as a bunch of trash, knick-knacks, and metal things rain down from the California desert sky. One of these objects, a coin, went straight into Otis Sr’s skull. I kid you not.

About six months later, OJ (Kaaluya) and his sister Em (Palmer) have been grieving. Because of it they have also been off their game in the horse service. On the set of one movie, OJ is unable to control one of the horses when it reacts violently to the fussing crew. Haywood’s is fired from the project. There’s been a string of these incidents. So their finances are low and OJ has been forced to sell some horses to keep the ranch going.

The siblings don’t see eye to eye either with the horse sales and what to do with the legacy of their father, the ranch, the horses, and they fight the only way brother and sister can—lovingly and with cruelty. Against this backdrop, strange things start happening in the valley where the horse ranch is located. Weird sounds blare out from nowhere, echoing through the hills. Bright lights start appearing and blinking in the sky. The electricity at their house goes on and off in weird ways. OJ spots something incredibly fast and large flitting through the night clouds, right along the hill line. 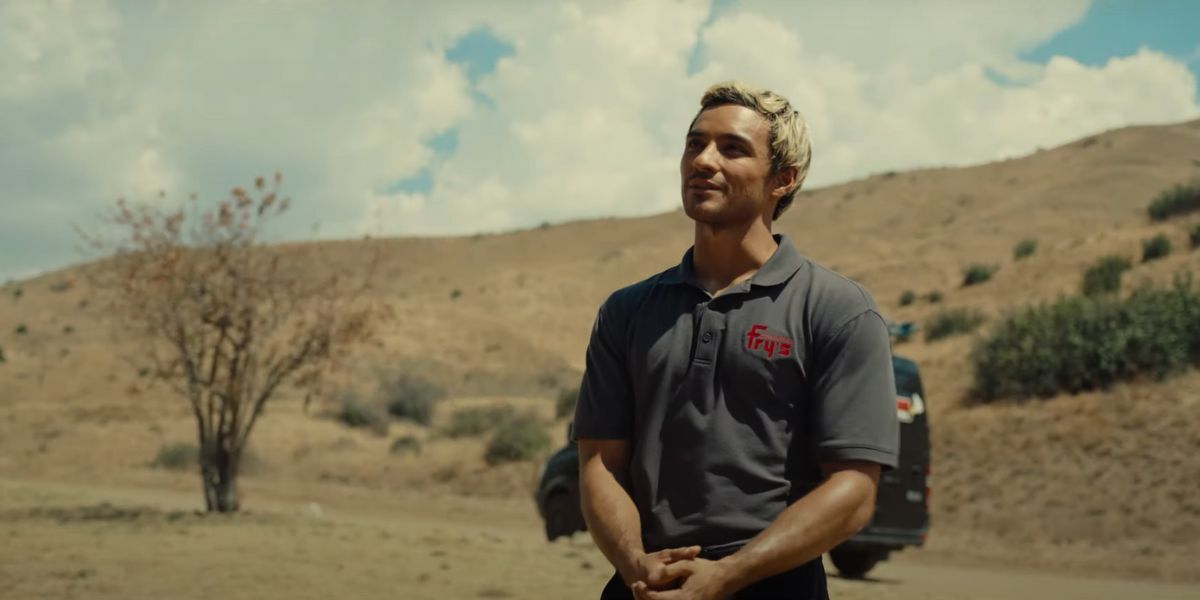 What the hell? Peele introduces us to the mystery with an aptly obfuscating mood and mastery of visual feints.

At some point the Haywood siblings say screw it and buy a bunch of surveillance cameras that they position around the ranch with the help of Angel Torres (Brandon Perea), tech salesman at the local Fry's Electronics. The guy also happens to be an enthusiast in UFOs, unexplained phenomena, and mythological cryptoids. Angel finds himself recruited into the mystery of WTF is happening at Haywood’s.

We’ll stop there. What you absolutely need to know about the pros and cons of Nope is that, first of all, Jordan Peele is a very talented writer-director. Both Get Out and Us have proven that he also loves horror and cares enough to not only consider the inherent comedy and emotiveness that those foundations of the genre can be used as, if only to facilitate storytelling.

Personally, I think this stands a few inches above Peele’s first movie. Nope is at number one while Get Out and Us are at numbers two and three on my preference list. This movie’s story and mission is clearer, the execution more polished, the timing of its peaks way more on point.

You can tell with Nope that he did his research and so shot the characters against their milieu beautifully. There are times I just gaped in awe at the light and ruggedness of the ranch where most of the story is set in. And to chuckle at how marvelously, Peele has essentially put people of color in a Western that’s traditionally peopled by sun-wrinkled white dudes. Another reason why you should watch this on IMAX, a very big point in the pro column. 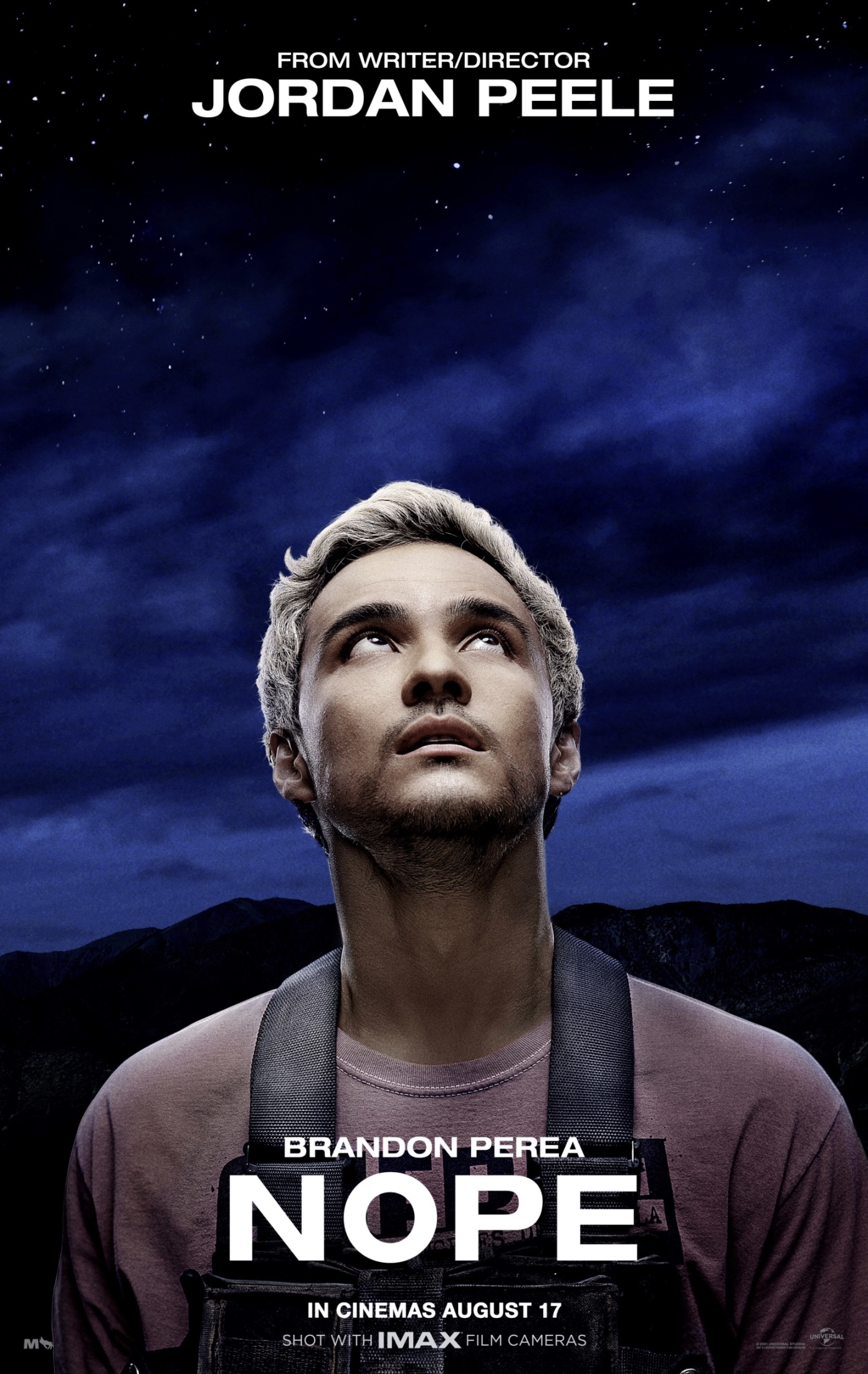 Second pro is how the movie plays with mood and atmosphere. You may feel a kind of meandering boredom towards the end of the first act or the start of the second as things calm down before they can get screwed again as Peele sets up the transition. We go from domestic mystery to horrific grotesquery on an incline, with the realization that we were heading this way all along, with clear road signs and subtle escalation.

No James Wan Conjuring-style jump scares here. Everything leads somewhere, even the filigree at the start with the Hollywood chimp going literally ape-sh*t. Kaaluya, Palmer, and Perea make for a good ensemble cast but their performances are slightly off-kilter for me. Seemingly confused at the kind of genre their characters are in though perhaps this is by design? Rather, Jacob Kim as the Young Ricky "Jupe" Park was the most relatable and shone best in his capitalist arrogance, even if he was essentially on the side of exploitative villainy.

What may be a letdown is the running time. You can feel the 130 minutes in the theater drag at times, but that’s just the nature of the meta arthouse horror beast.

Which leads me to the second con that is intrinsic to Peele’s style: the commentary on social issues can get too clever by half. Yes, there are references and allusions galore that someone versed in the horror canon, Peele’s previous movies, and that particular niche of conspiracy where cryptids and extraterrestrials overlap in a tasty Venn diagram of unprovable speculation. The meta may be too saccharine, an insider joke that alienates the casual, estranges the blasé. But I did like how MADtv figured in some scenes, since Peele spent quite a long time there.

Personally, I think this stands a few inches above Peele’s first movie. Nope is at number one while Get Out and Us are at numbers two and three on my preference list. This movie’s story and mission is clearer, the execution more polished, the timing of its peaks way more on point.

You may ask the question, as Yeats did: “what rough beast” is writhing under the skin of the world wanting to be birthed? Haywood Ranch is Bethlehem. No wise men here, but rather three people of color waiting to slay the beast when it breaches.

You’ll find the answer waiting to surprise on Nope, under devouring skies. Look up, in fear.

“Nope” is rated R-13 and is now screening in Metro Manila on IMAX and standard theaters.

Watch 'Your Name,' 'Weathering with You' and other anime for free at Robinsons Galleria