Life is too short to miss out on good burgers, don't you agree? But having one too many can also put your health at risk.

Luckily, many restaurants are starting to incorporate healthier options in their meat-filled menu. So whether you're a vegetarian or carnivore, here are some burgers you might want to check out to have your cravings satisfied, minus the guilt and calories.

Homegrown hotdog diner Three Guys and a Grill is incorporating a handful of greens into their all-meat, all-local cuisine with the new Veggie Menu.

Launched on November 22 in time for World Vegan Month, the 100 percent plant-based lineup consists of the Woke Burger, Vegan Dog, and Tipsy Rings.

Ang just when you thought eating french fries is always unhealthy, Three Guys and a Grill whips up a vegan version called the “Tipsy Rings.” The rest describes it as fried onion rings “coated in vegan batter and local beer” paired with vegan mayo or a dip of your choice.

Get it delivered by calling through Three Guys and a Grill’s hotline 8817-4449,  Facebook page, Grab Food, Foodpanda, and Lala Food.

Now, even vegetarians can have their Burger King meals done "your way," thanks to the recent launch of its Plant-based Whopper.

A healthier version of Burger King's best-selling sandwich, the plant-based Whopper contains patties made out of soy protein, potato protein, coconut oil, sunflower oil, salt, and yeast, among other ingredients. While it is plant-based, it is not considered vegan because it usually comes with mayonnaise and ketchup, unless you request otherwise.

For a starting price of P89, it's still worth digging into if you're a vegetarian or foodie who simply wants to cut on meat consumption.

Have it delivered through their hotline #2-22-22, Facebook page, Grab Food, Foodpanda, and LalaFood.

A household name in the pizza game, Shakey's surprised fans when it launched the latest additions to its all-meat lineup—The Goood Burger and The Goood Goood Burger.

The Goood Burger is the healthy plant-based counterpart of Shakey's Baaad Burger launched on Oct. 21.

The Goood Burger is stuffed with a plant-based patty, vegan thousand island dressing, lettuce tomato, and cucumber. Its potato buns are made with egg and milk, which makes it non-vegan. But it doesn't have cheese, making it less in cholesterol and guilt-free!

A month after launching The Goood Burger, Shakey's whipped up a version of the dish that is 100 percent vegan.

Meet The Goood Goood Burger, a sandwich that consists of the same plant-based patty, vegan dressing, and veggies as that of The Good Burger. But instead of using potato buns, it wraps all the ingredients with slices of fresh lettuce, making it legitimately vegan.

Zark's Burger has been the go-to resto of foodies craving for towering cheesy, beefy burgers. If you want the same savory meal minus a few hundred calories, the Zark's V Burger could be your best bet.

It contains San Miguel Foods' Veega meat-free patty, which is made with mushrooms, soy,  wheat, egg whites, and spices. Topped with cheddar cheese, garlic ranch sauce, tomatoes, lettuce, and brioche buns, the V Burger is set to fill you to the brim.

Want it delivered? Look up Zark's Burger on Foodpanda, Grab Food, and LalaFood.

8Cuts' The Falafel is deemed a cut above other meatless burgers. Fans rave about its flavorful combination of crispy ground spiced chickpea patty, sweet potato mash bed, and lime-basil tartar on a Kaiser roll.

The meatless burger is considered vegetarian (and not vegan) because of its tartar sauce and buttered onion, cucumbers, and tomatoes. If you want it the other way around, you can request for a vegan bread and have the sauce removed. Whatever you choose, it sure looks good!

Grab it a la carte for P250 or in a meal with iced tea and skinny fries or onion rings for P328. You may book your order through Foodpanda, Grab Food, or momentfood.com.

Shake Shack is loved by foodies worldwide for its beefy burgers. They would often form long queues to get a taste of the restaurant's bestselling buns.

With the 'Shroom Burger, Shake Shack continues to prove that they are worth the hype—even without its meaty patties. The 'Shroom Burger is made of crisp-fried portobello mushroom filled with melted muenster and cheddar cheeses and topped with lettuce, tomato, and ShackSauce. Fans attest that each bite explodes with cheese!

7. Sweet Ecstasy: The Beyond Burger

Talk about sinfully juicy grilled burgers, and for some, Sweet Ecstacy would be top-of-mind. In July 2019, the famous burger joint added more flavor to its already mouthwatering menu with the vegan Beyond Ecstasy Burger.

Anyone who would eat the burger would hardly notice that the burger's patty is plant-based because it is chewy and tightly-packed. The bread is made without egg, dairy, or gluten. Dairy-free Daiya is used as cheese, and the Ecstasy sauce is made with tofu.

You don't have to worry if it's 100 percent vegan because, according to one of the restaurant's Facebook posts, the Beyond Burger is "cooked on a separate griddle from our meat patties. We use separate cooking utensils for it as well."

Get your hands on it for P500 on Foodpanda, Grab Food, or Viber.

Storyteller of food, travel, and neat finds in the metro. Let's get in touch at [email protected] 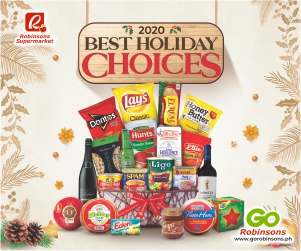 LOOK: A cute beagle from the PNP’s explosive disposal K9 unit shows off its skills

Get on a plane for speed dating, a Buddhist pilgrimage—everything but getting to a destination