After two years of the pandemic, the Hallyu community finally got together for a day of fun and friendship.

PULP Live World and youth-oriented non-profit organization The Ripple Society created an event called "Ripples of Hope 2022" where fans were able to unite for their love for music and K-pop music.

During the event, 19 fandoms competed in six games for the title of the first Ripple Champion. Players made sure to give it their all as exciting prizes were to be given away. To cap off the night, EVERGLOW, MOMOLAND, and AKMU performed for the crowd who sang along to every lyric.

Here are the memorable moments from the Ripples of Hope 2022 event held last Nov. 26 at the SM Mall of Asia Arena:

Like in any other opening ceremony, each team had to be introduced in a parade. 12 teams, in their jerseys, with some carrying props and wearing extra costumes, made their way onto the playing field, representing their fandom with pride.

Some of them even went the extra mile to have their own “pakulo” to their entrances, like Not Shy Shy Shy coming in with a procession. Team Treasure reminded one of intramurals, as they gave way to introduce the muse of their team. Meanwhile, Team NCT made sure to don on their fandom colors in their outfit.

Unlike the horrible fate of players in Squid Game, this version of Red Light, Green Light had players staying still in various poses as they make their way towards the front of the stage and avoiding the gaze of Little Happee. Some of the fun poses they did were zombies, ballerinas, and yoga positions.

Things got intense as more and more teams got eliminated, leaving Bangkon, Team Seventeen, PinkDay, and Team NCT to play Tug of War and Ugly Duckling.

While not everyone can be a winner and take home the wonderful prizes, others still went home with smiles on their faces. After all, these fans came to enjoy the event and make friends with their fellow K-pop fans.

The night capped off with performances by EVERGLOW, MOMOLAND, and AKMU, where fans danced and sang along to the music.

EVERGLOW made sure to learn some Filipino phrases like “masaya ako na makita kayo” and “mahal ko kayo.” MOMOLAND, meanwhile, said they missed the Philippines.

As for AKMU, the duo felt like they’ve been here before because of the love they received from Filipino fans on social media. They said that they would love to come back and perform again. 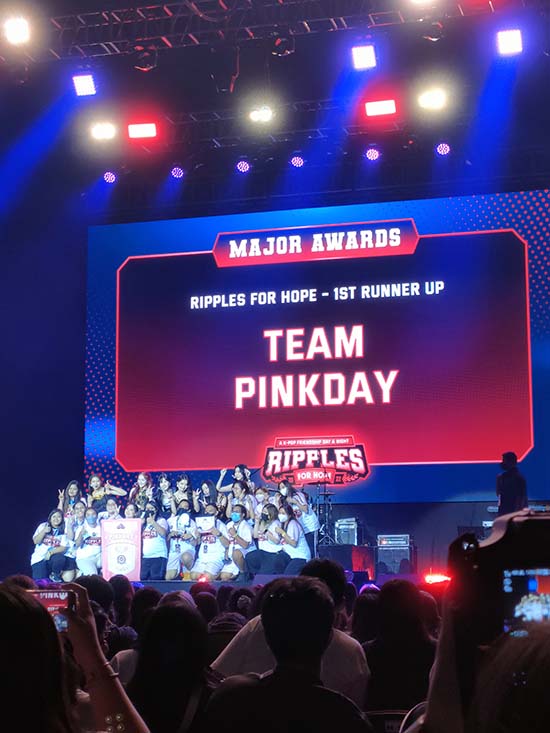 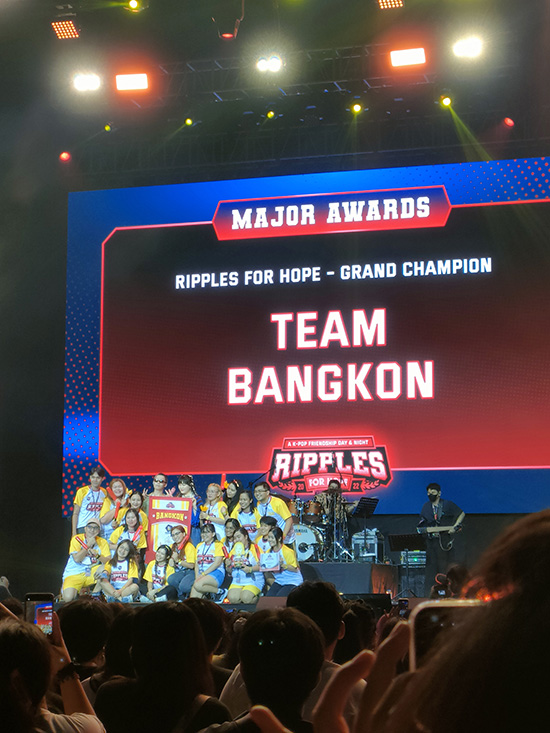 The winning teams from the day event were in for a treat as they were awarded by the performing artists. The prize? Tickets to any upcoming K-pop concert by PULP Live World!

Lastly, Ripple Championship and VIP tickets were awarded to Team Bangkon by AKMU.

Despite her foreign surname and weirdly spelled name, Djulienne is a creative writer interested in literature, anime, games, culture, and music. She also likes cats and coffee.