With its unmistakable classic silhouette and chunky design, Crocs has been a subject of heated discussions in the fashion industry. Some call it outright an “ugly” footwear, while others acknowledge the brand’s success with its collaboration with brands over the years—from KFC to Balenciaga.

These foam clogs, which were originally developed as a boating shoe, have become chic, thanks to its successful collaborations with celebrities like Justin Bieber, Drew Barrymore, Ruby Rose and Post Malone.

Crocs has also collabed with fashion brands, most recently with Spanish luxury fashion house Balenciaga via its Spring 2022 collection that featured the classic clogs in much-talked about iterations—rubber pumps and utilitarian rain boots—dubbed “Balenciaga Crocs 2.0".

Crikey! Balenciaga and Crocs are back with another collab, this time featuring high heels

The brand has sold over 700 million pairs worldwide since it was first introduced in early 2000s. It also has its own signature Jibbitz charms, which are used to jazz up each pair of Crocs.

Whether you love them or hate them, these Crocs will continue to be in the public’s radar, like how it made a cameo at this year’s Academy Awards where musician Questlove of The Roots walked the red carpet in his gold Crocs.

Who What Wear also made a fashion forecast recently—Crocs are set to be the footwear trend of 2021.

With that, let’s look back at the most notable Crocs collaborations and look forward for more to come. 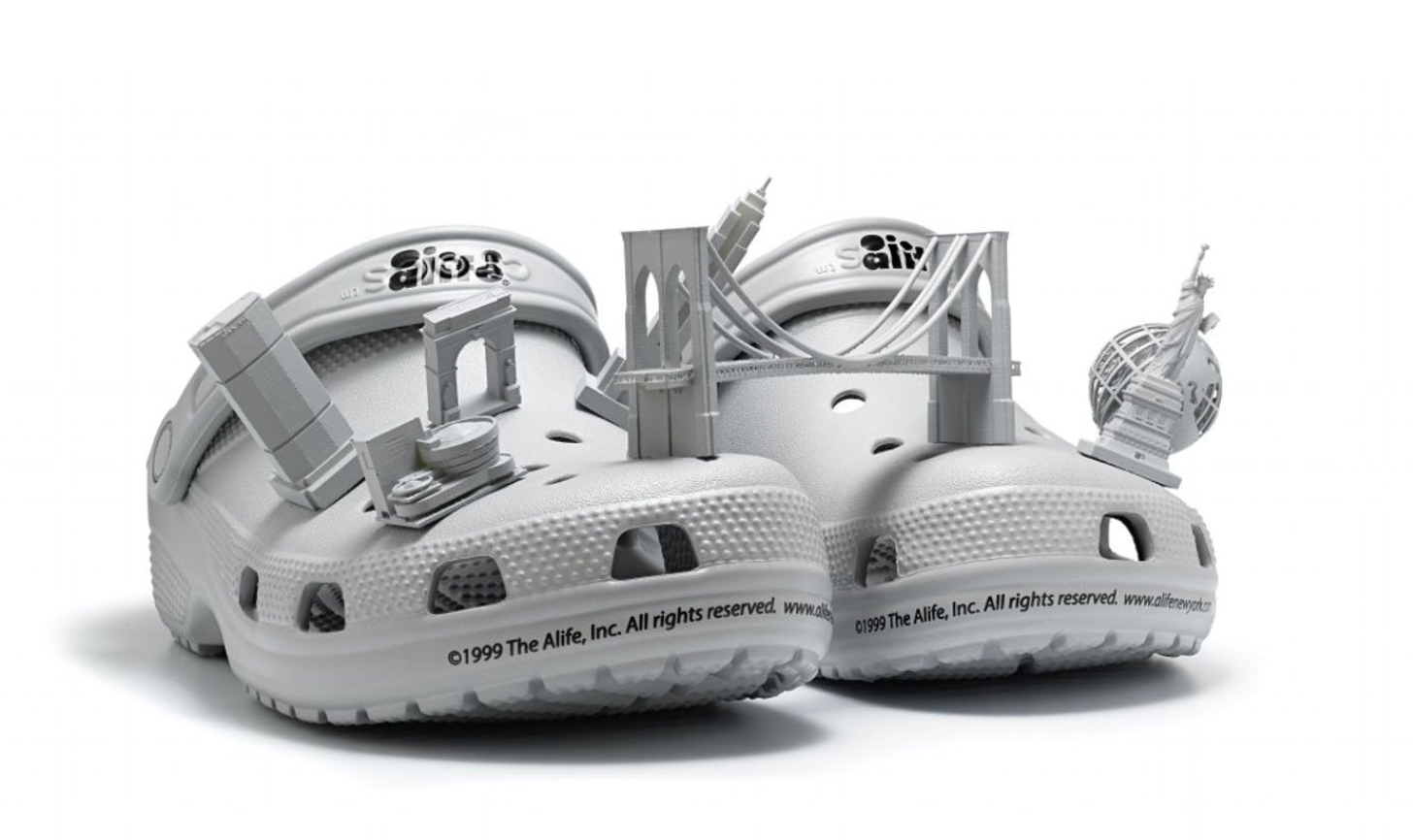 The collection’s pieces include a Sport clog that played with the socks-with-sandals trend, a Classic pair emblazoned with Alife’s brand name, and the Art clogs that feature 3D-printed Jibbitz charms.

The Art clogs, which were sold for $600 (P28,000) a pair, come with charms that are shaped like iconic landmarks in New York City, including the Statue of Liberty, Brooklyn Bridge and the Empire State Building. 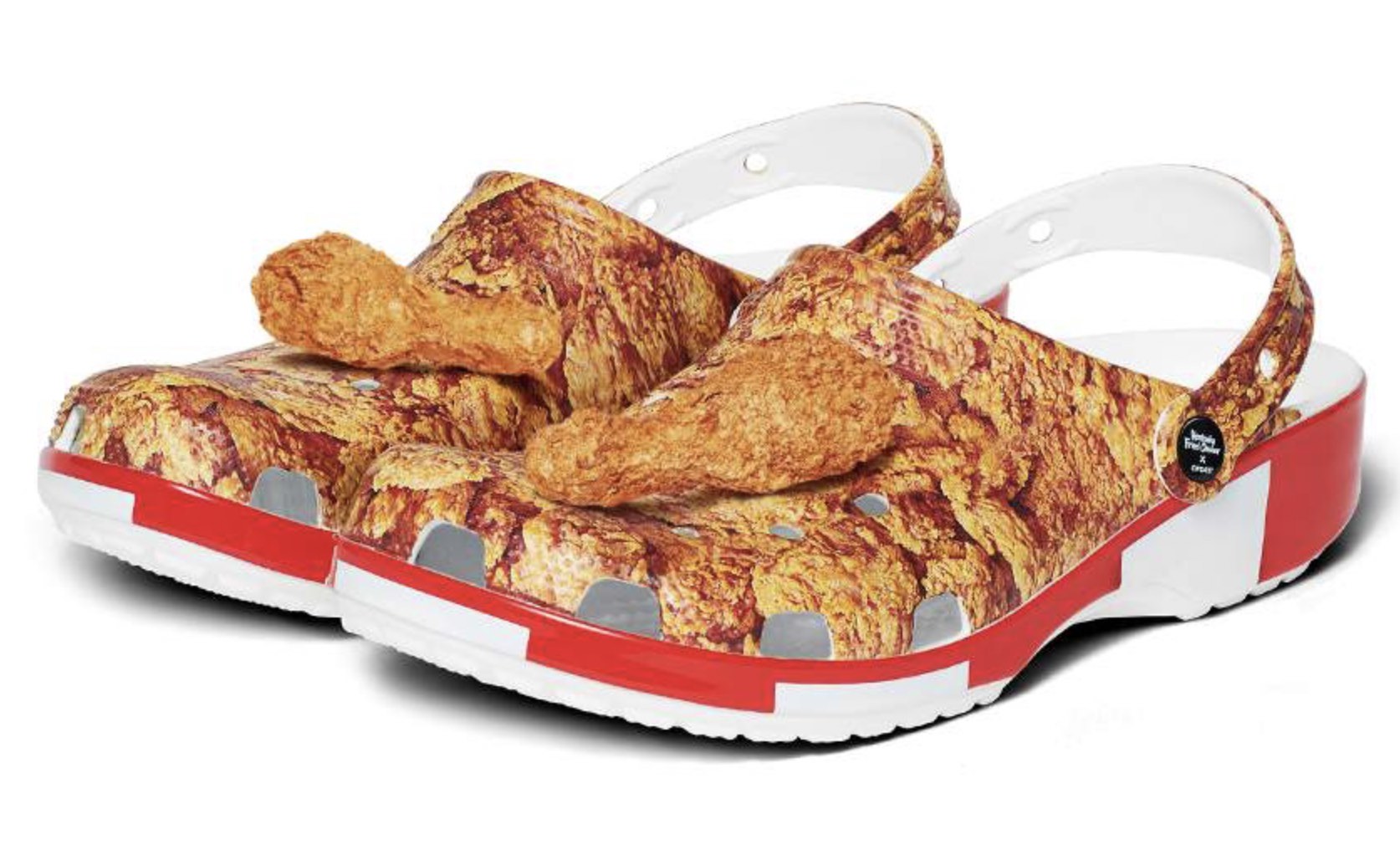 These Crocs are covered in a fried chicken print with a striped base, which is a nod to the fast-food chain’s iconic red-striped bucket. Each pair of the co-branded footwear comes with two Jibbitz charms that resemble fried drumsticks, which were also fried-chicken scented.

These charms look (and smell) realistic enough that Crocs had to put a disclaimer on the website that they weren’t for human consumption.

The clogs were sold out in 30 minutes and were  priced at $60 (P2,800) a pair. Another version of the clogs that debuted were avant-garde platforms, also chicken-printed and featured the fried chicken Jibbitz.

Do you think Col. Sanders would have approved of this collab? 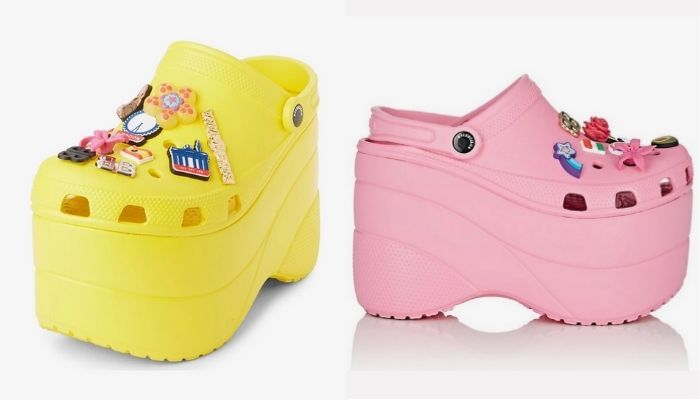 The first collaboration between Balenciaga and Crocs was in spring 2018 at the Spanish luxury fashion house’s ready-to-wear show. Models took the runway by storm wearing the brands’ platform clogs—in pink, black, green and yellow.

The platforms came with Jibbitz charms including Balenciaga’s logo, flowers and the Italian flag, and were sold out even before their release. They were priced at $850 (about P40,600).

“It’s a very innovative shoe,” Balenciaga creative director Demna Gvasalia told Vogue UK about the brand’s first collaboration with Crocs in 2017. “It’s light, it’s a one-piece foam mold, and to me these kinds of techniques and working with these kinds of materials is very Balenciaga.” 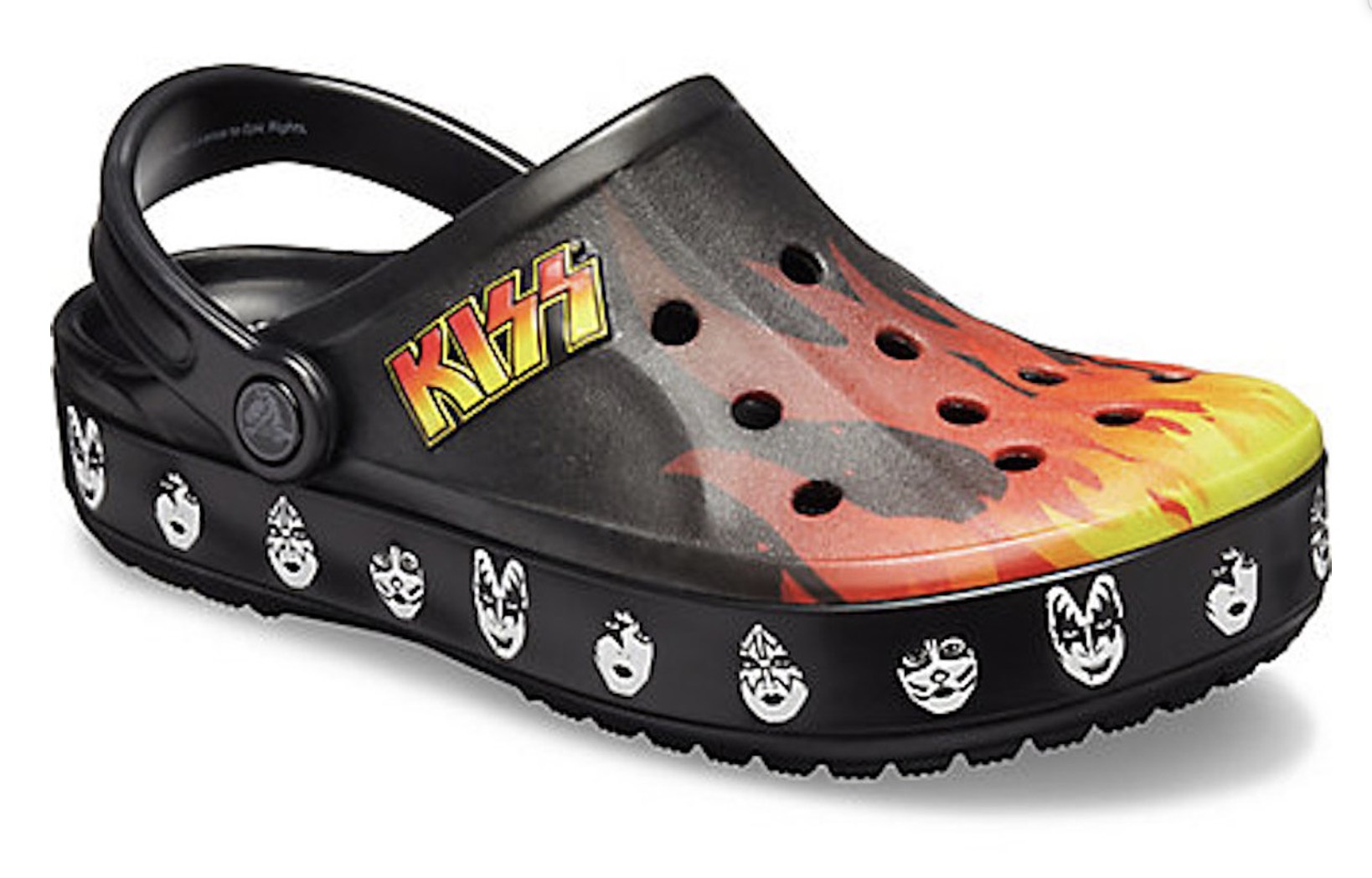 Two Bayaband KISS Clog were made available, which has a fire design with the faces of the band members in their iconic black-and-white makeup on the sole of the clogs.

There are also the Classic KISS Clog, and the Crocband Platform KISS Clog, which is a nod to the band members who are also known for wearing platform shoes when performing onstage. 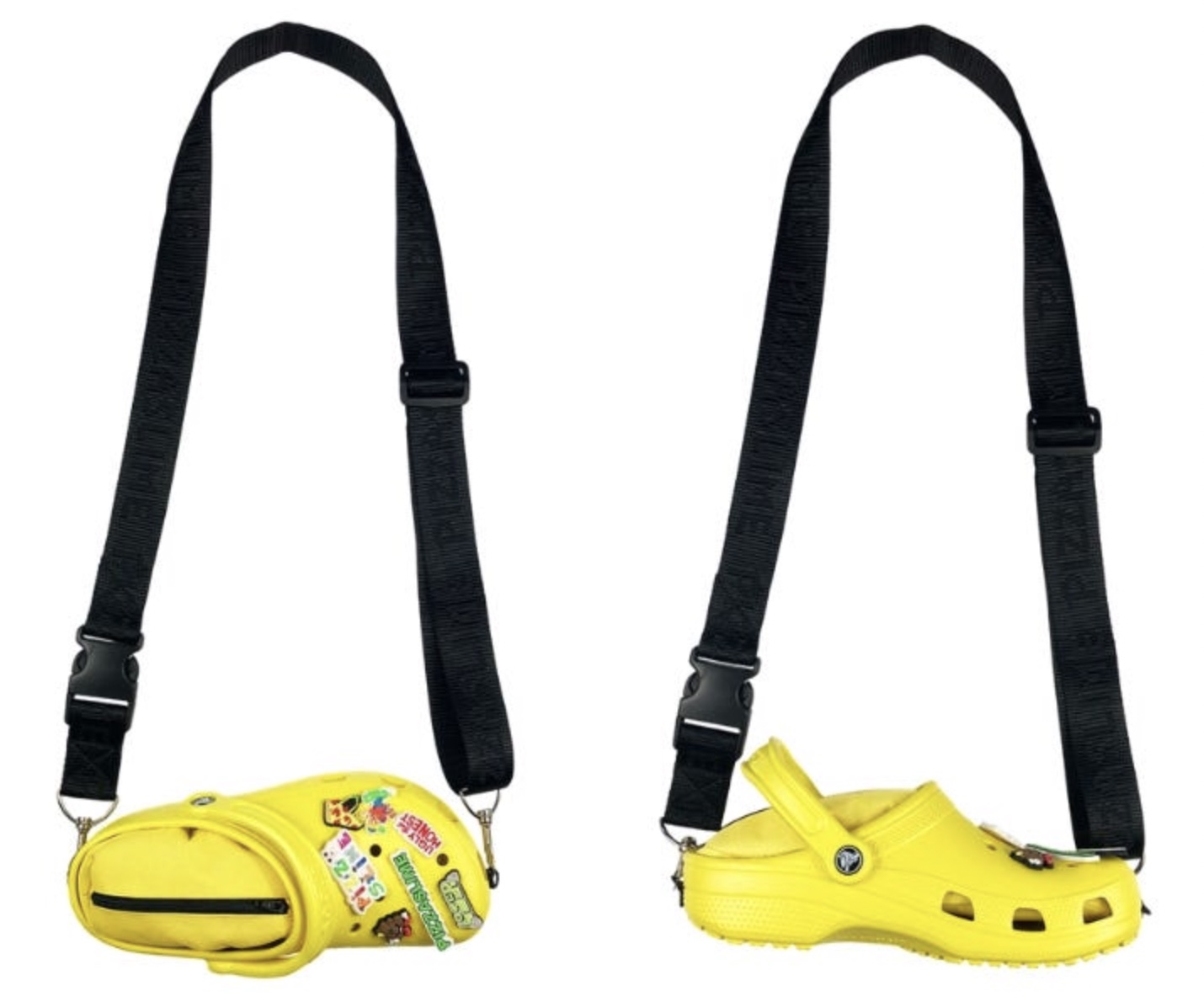 Online clothing store PizzaSlime collaborated with Crocs in 2019 and created two crossbody bags made from a pair of the footwear.

Each Crocs bag  bears the recognizable silhouette of the the classic Crocs, and comes with seven custom PizzaSlime-themed Jibbitz.

The handmade bag comes in yellow and black, and was limited to 25 pieces each color. The PizzaSlime X Crocs bag was priced at $300 (about P14,000). 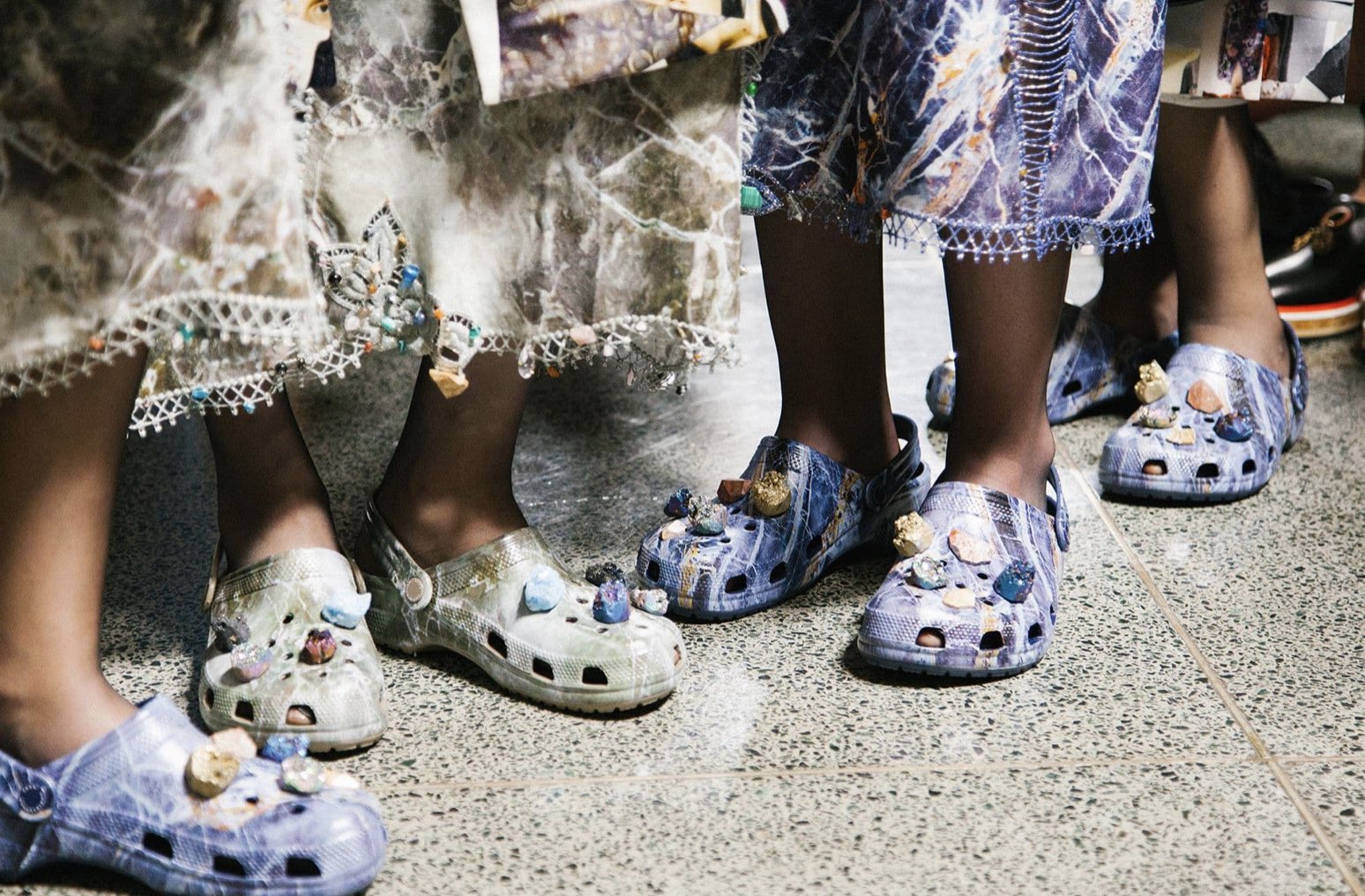 Christopher Kane and his eponymous luxury brand was the first haute house to partner with Crocs. Some even considered this collab as the one that was behind the Croc-chic phenomenon.

For his Spring/Summer 2017 show, Christopher Kane released a bespoke, limited-edition Crocs called Swiftwater Sandals that debuted on the runway of London Fashion Week. 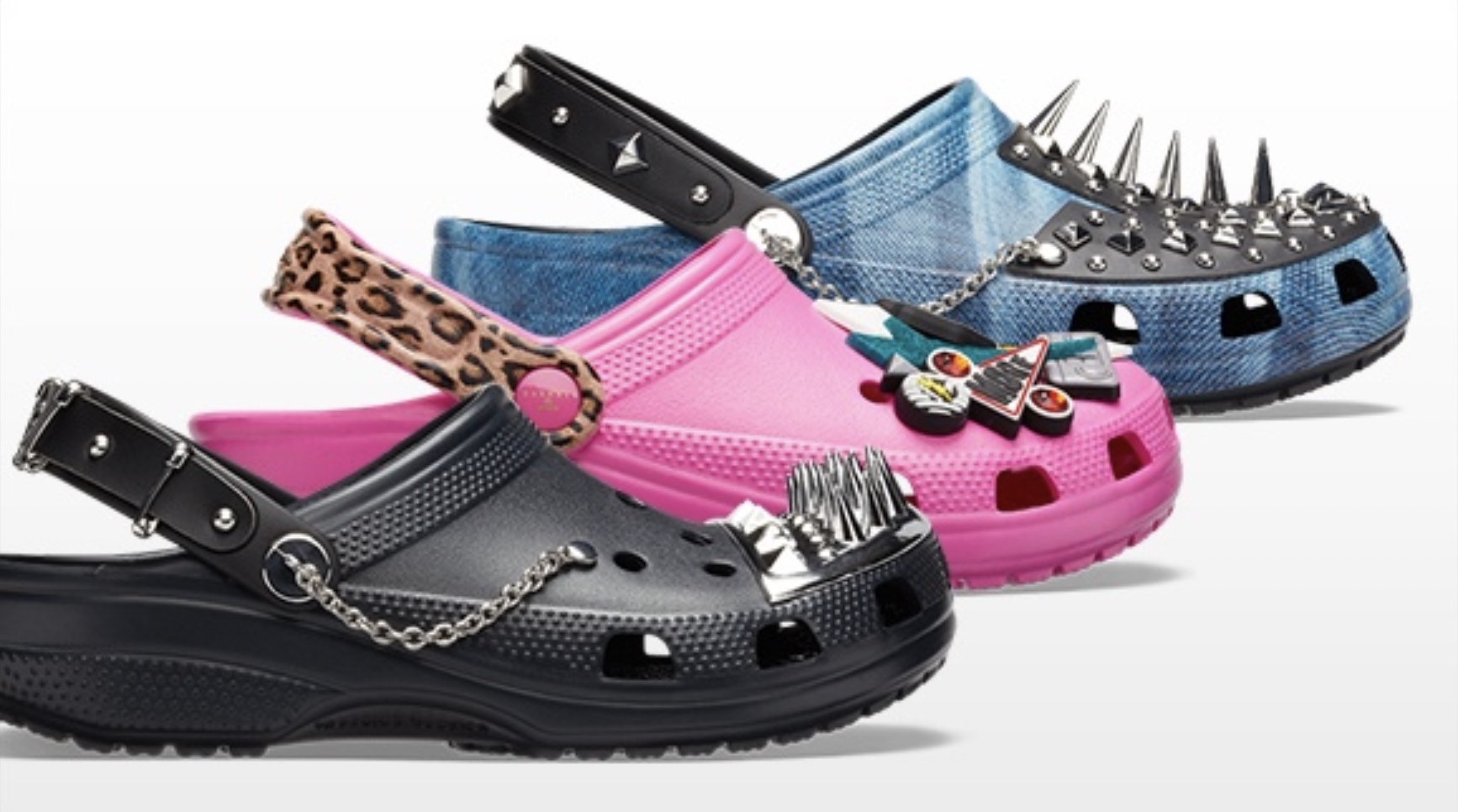 These edgy punk rubber clogs are a product of Crocs’ collaboration with the now-defunct luxury department store Barneys New York.

Another variation of the footwear was in denim embellished with metal studs and more spikes.

Banner and thumbnail photos from www.crocs.com