Style Living Self Celebrity Geeky News and Views
In the Paper Shop Hello! Create with us
@voguerunway / Instagram

An American brand has received flak from Filipinos over the week for their colorful woven textiles that resemble a basahan from the Philippines.

US-based artist Elise McMahon of Likeminded Objects was recently featured on Vogue Runway's Instagram account on Tuesday, Feb. 8, where she was interviewed about her latest upcycling project.

The caption reads: "The United States has a t-shirt problem, with millions of tees discarded every month. Enter Elise McMahon, founder of the studio @LikeMindedObjects, who specializes in creating upcycled items from discarded fabrics."

“Using an 18″x18″ loom, she makes a woven textile from old tees, creating a heavy, puffy material not dissimilar from quilted fabrics or weighted blankets—and she wants you to be able to do the same,” it continued.

McMahon revealed in the Vogue interview that the "overabundance of T-shirts in America" led her to repurpose textiles into something more useful.

"Textile has this unique property that it’s pliable and can have many lives. It can continue to be washed, dyed, torn apart and reconstructed into something new. I don’t believe in textile waste. There’s no need for it to be discarded. This is a familiar thing of a potholder loom, but jumbo," she told Vogue.

"In the PHILIPPINES we call it DOORMATS," wrote user @pauloinmanila, while @gilerric added: "In Philippines we make those for doormats. $2 or ₱100 for 3 pcs."

Regine David thought her work was cool, but was bothered that other cultures that have been upcycling fabrics "for much, much, much longer" weren't acknowledged.

Others mentioned that aside from the Philippines, loom is also a common weaving method in other Southeast Asian countries such as India and Indonesia.

"These are common doormats in South Asia and Latin America lmao," said @anieenm.

"in Indonesia, it’s common to see this woven method as well. crafters changed those tees into doormats," wrote @kemiri.

User @nicapurr said: "when its a white woman, u get called 'genius' and 'iconic' a literal savior of the fashion industry waste lmaoo. when southeast asian women have been doing these for yearssss."

Some also mentioned Rags2Riches, a local social enterprise brand that has been transforming scrap fabrics and textiles into accessories since 2007, for being one of the originals.

8 local brands that have your sustainable living essentials

McMahon spoke about the controversy in a series of Instagram Stories posted on Feb. 8.

In one post, she said that learning more about T-shirt weaving in the Philippines had "been inspiring."

"Lots of important conversations to have and unpack around textiles, aesthetics and global material culture tomorrow after some sleep," she wrote.

In another Story, McMahon said that she is "definitely aware" that used textile weaving is nothing new, but is "hoping more people would do it."

She is also well aware of the comments made on her work, which Filipinos resembled to a basahan or doormat.

"Through these comments last night and today I learned about this amazing weaving style, Basahan, using tshirt material that has long been happening in the Philippines and have been rushing to educate myself since," she wrote, adding that she respects the practice and the effort by people to repurpose waste. 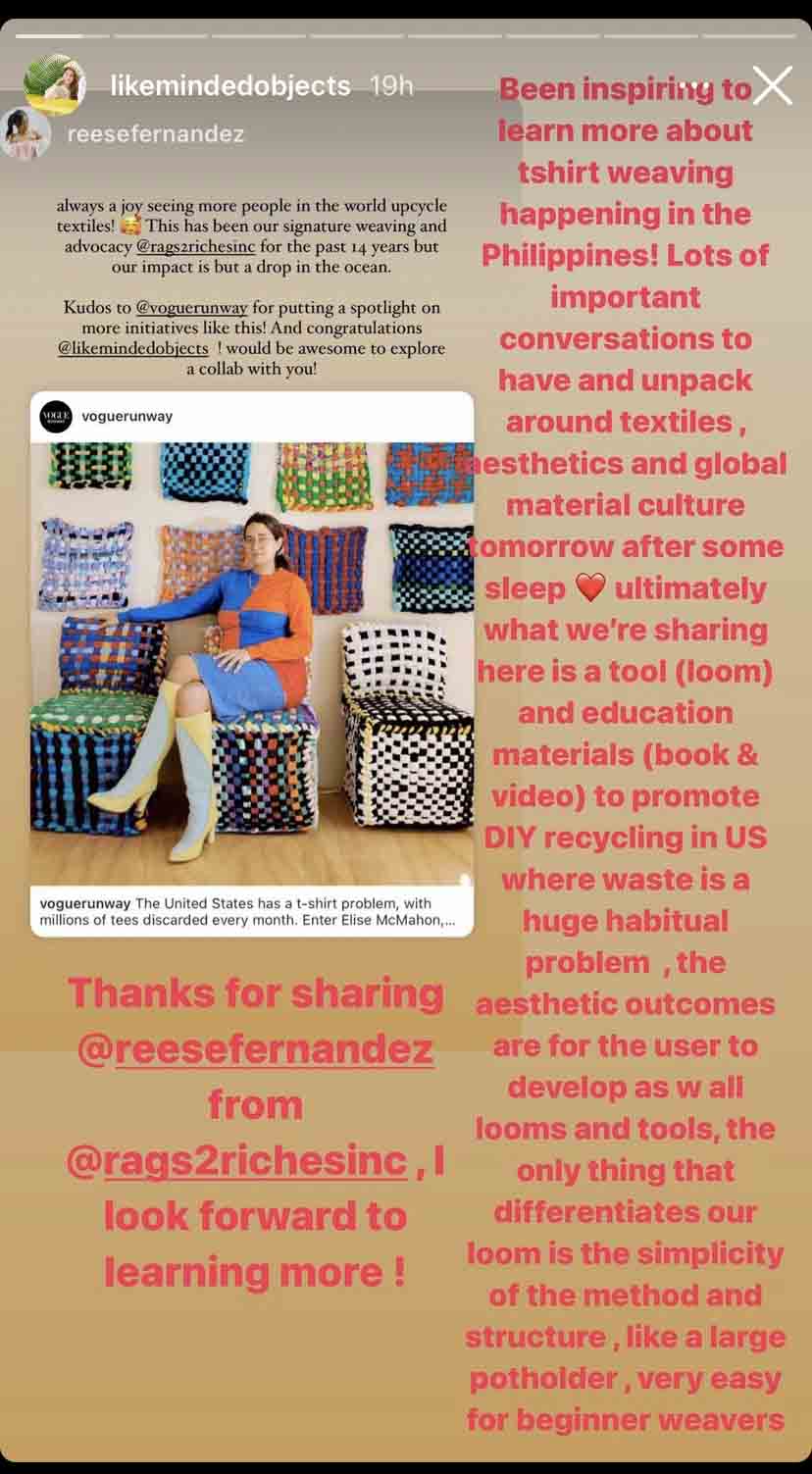 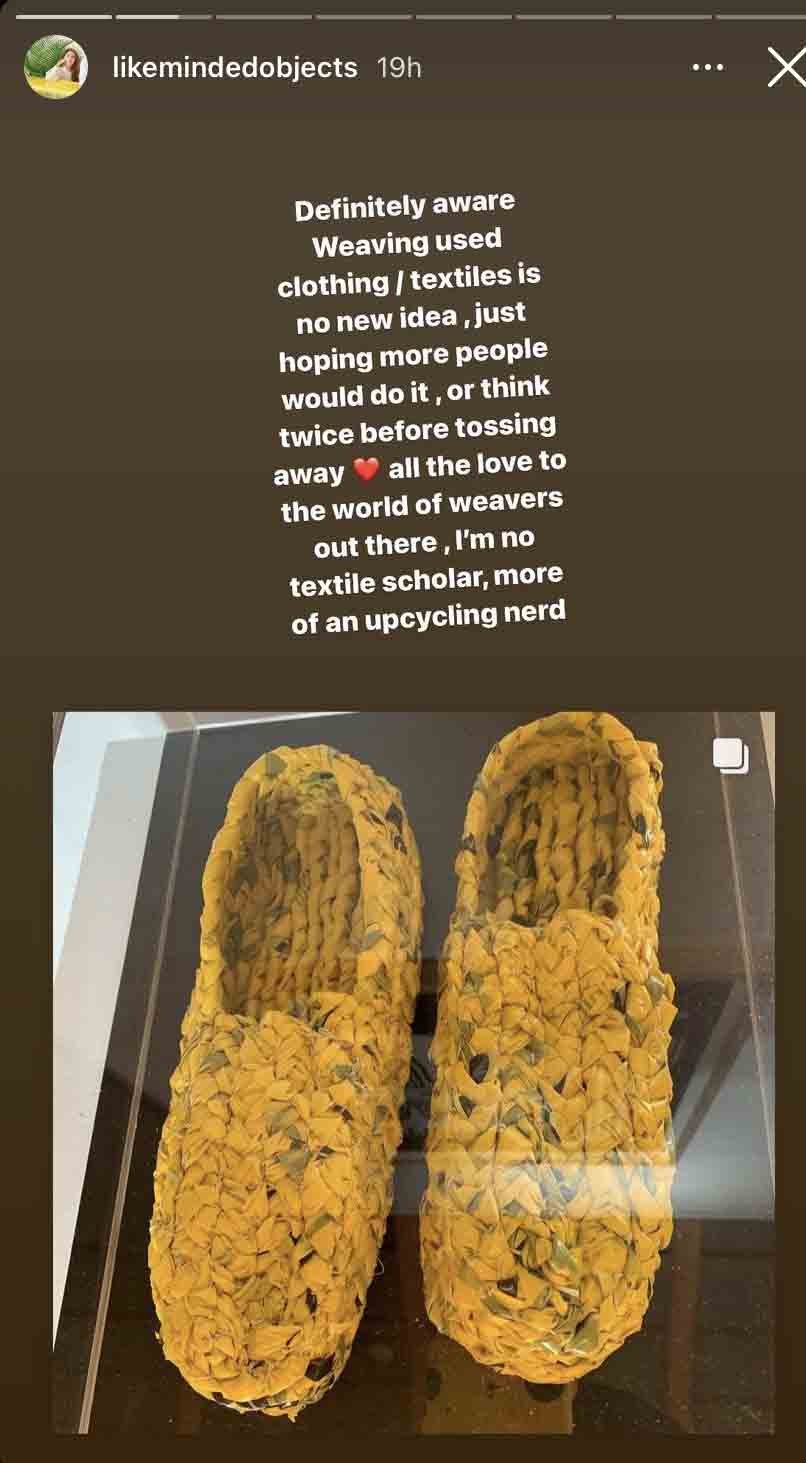 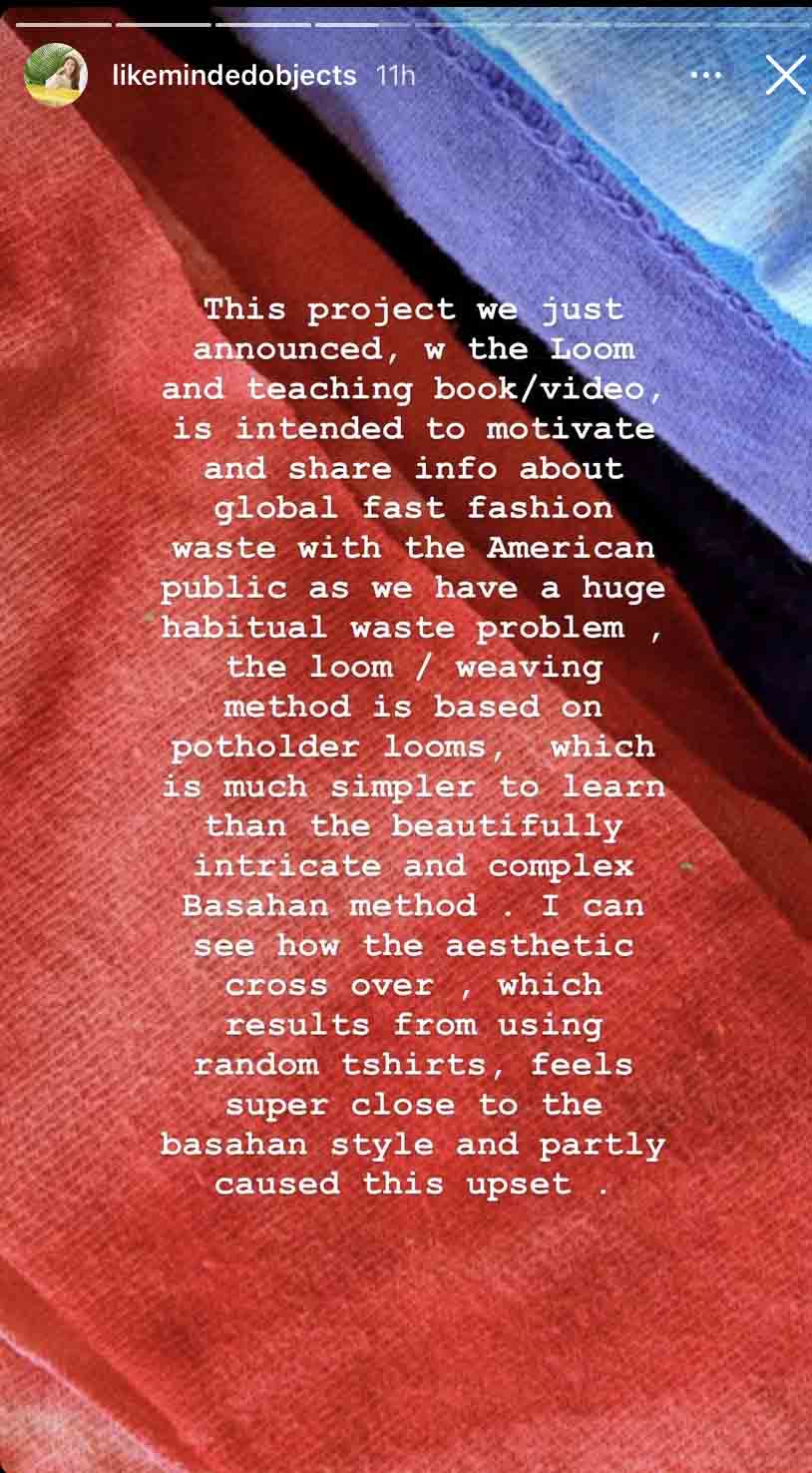 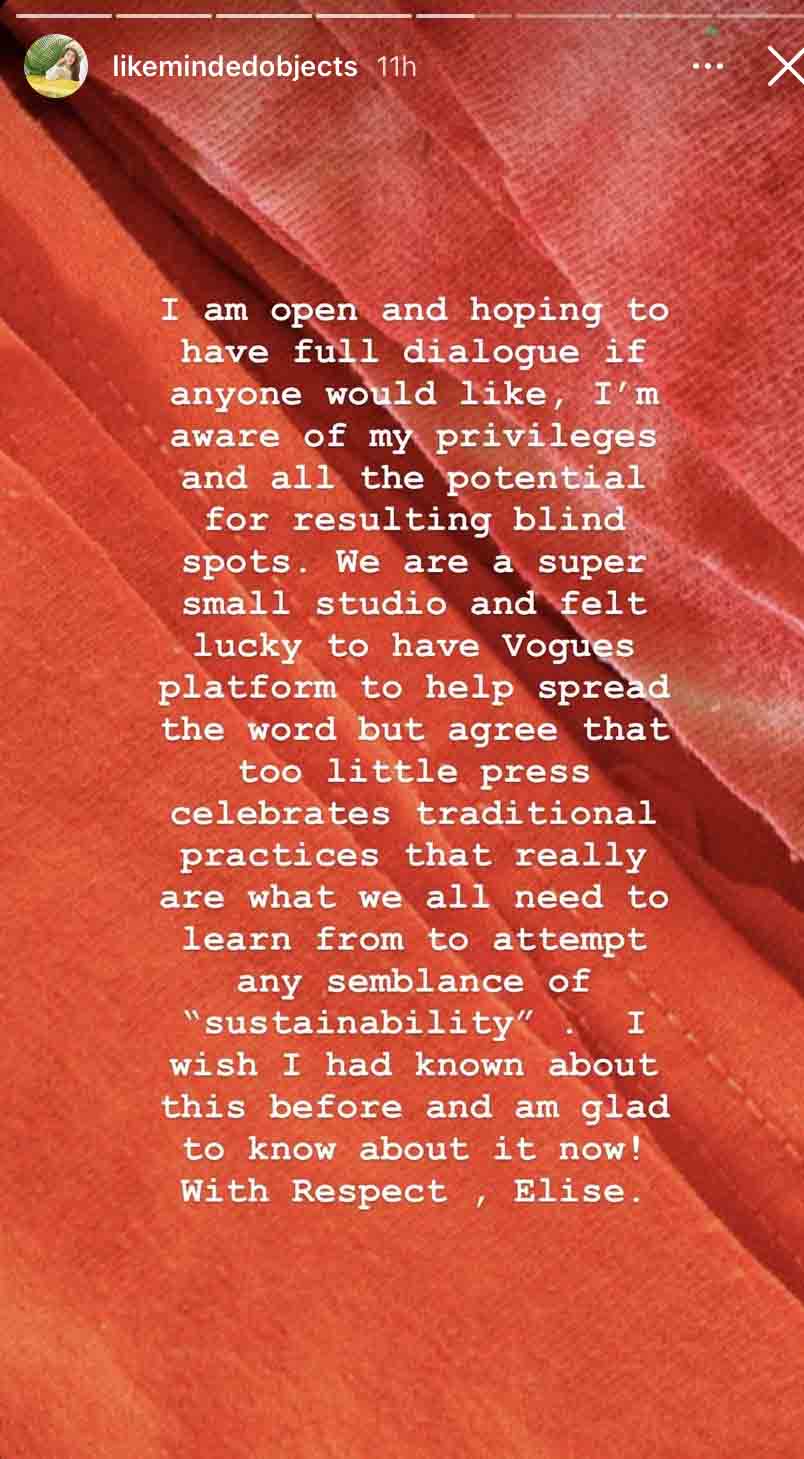 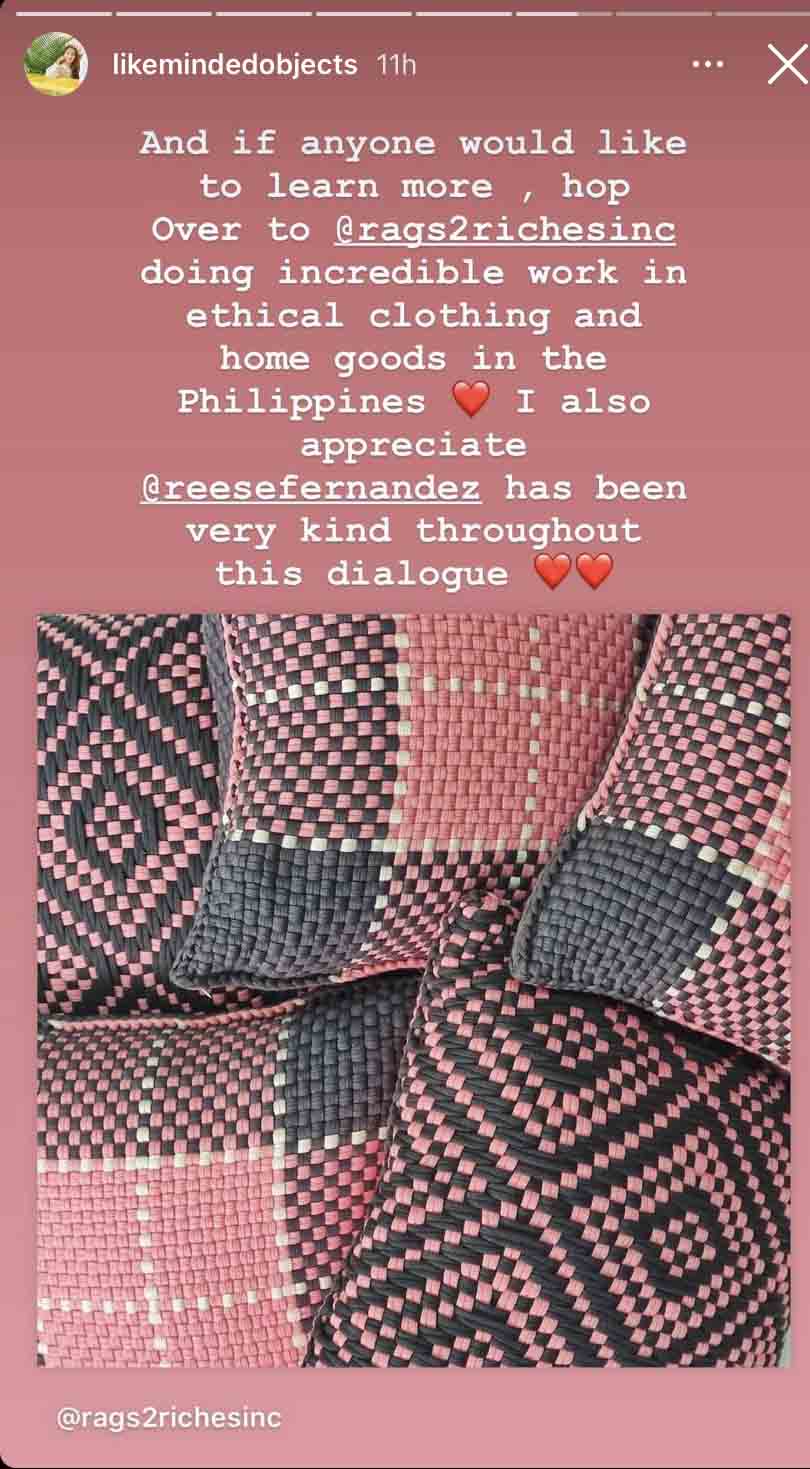 McMahon, who calls herself as an upcycling nerd, clarified that her brand's latest project is intending to promote recycling and teach the art of loom through educational materials, such as books and videos, to the American public who "have a huge habitual problem."

Likewise, she defended that the "simplicity of the method and structure" of their loom is what makes their brand different. McMahon explained that the loom or weaving method that they're teaching is based on potholder looms, a simpler method compared to the "beautifully intricate and complex Basahan method."

"I can see how the aesthetic cross over, which results from using random tshirts, feels super close to the basahan style and partly caused this upset," she said.

McMahon said that she is "open and hoping to have a full dialogue" with anyone about this matter.

She said that as a small business entrepreneur, she felt "lucky" to be noticed by Vogue's platform, but also acknowledges her privilege.

The American artist said: "Too little press celebrates traditional practices that really are what we all need to learn from to attempt to any semblance of 'sustainability.'"

"I wish I had known about this before and am glad to know about it now!"

A Filipino brand sends a message

Meanwhile, Rags2Riches (R2R) co-founder Reese Fernandez-Ruiz has also spoken up about the issue, after she received numerous mentions and comments from fellow Filipinos.

On Wednesday, Feb. 9, Fernandez-Ruiz, whose brand has been making ethical and handcrafted bags by local artistans for more than a decade, acknowledged the netizens' frustrations regarding the so-called unoriginal concept, but also tried to see the situation in a positive perspective.

"I understand the frustration. There are many reasons to feel frustrated. We need more supportive systems, access to bigger platforms and markets, recognition for artisans and their crafts, appreciation of our culture, and the list goes on. But the path to get there could be one that is open, kind, and intentionally inclusive. We’ve got a lot of work to do, so might as well do it together," she continued her statement.

In a list, the entrepreneur shared her views on the situation, starting with a brief background on the craft industry and how their brand started.

According to Fernandez-Ruiz, many artisans here and elsewhere "suffer unfair trade practices," adding that they started R2R to provide livelihood for a community of artisans in the country.

She also explained that there's just "so much waste" and that textile waste is only a small part of a bigger problem. But as part of their initiative, whether it seems small or big to anyone, they still try to make an impact.

She also mentioned the support the brand has received from artisans, partners, and buyers that has helped them throughout the years.

"Moving forward, we will focus on where we are going, take small but consistent steps, and engage with more advocates and possible partners (and we hope you can help us get to more!). And we’ll do it the way we have always done it: with lots of kindness, patience, and calling in," Fernandez-Ruiz added.

Fernandez-Ruiz also said that she has been talking to McMahon, whom she learned to be "kind, open, and considerate."

"She is a person that I never would have met but now we are connected. And I think that bridge has power as bridges often have," she said of her.

"In this ongoing discourse, I’m hoping that more cultures and people can be uplifted. It takes a lot of consistent work to give more platforms to those who do not have the same access as others," Fernandez-Ruiz also added.

To end her statement, she's calling everybody to learn more about their work in R2R, as with other brands, "and explore ways to collaborate or just get connected."

"You know what I said about bridges, right? Let’s weave and build more!"

Rags2Riches was also featured in Vogue UK in 2013.