Shoes inspired by the Taal eruption, jeepneys and even a bowl of ramen — our Filipino footwear designers proved their talent once again at turning imaginative ideas into wearable reality at the Filipino Footwear Design Competition 2020 (FFDC), a yearly national competition organized by the Philippine Footwear Federation, Inc., in partnership with the Department of Trade and Industry (DTI).

At present, it’s the only national competition that promotes Filipino footwear design and development. The Grand Winner gets P10,000, first runner-up gets P7,000, and second runner-up gets P4,000.

Zapateria hosted this year’s Zoom event, which featured seven finalists who presented their designs and were interviewed and judged in real time by a panel of judges.

In the competition, finalists collaborate with established shoe designers and Marikina-based shoemakers to bring their sketches to life, and the winning designs will represent the country at the International Footwear Design Competition (IFDC) in China.

“Filipino talents, no doubt, are known the world over,” said the keynote speaker, DTI Undersecretary Blesila Lantayona. “This is what we consistently showcase in many international art competitions. This natural talent of ours, coupled with our strong affinity for footwear, is the perfect recipe for winning the International Footwear Design Competition,” she continued, citing the example of young designer Thian Rodriguez, who won the Lady’s Trendy category in IFDC 2019 with his entry, Magdalena.

After almost an hour of deliberation, the judges awarded the three winners.  Here they are, along with the other finalists. 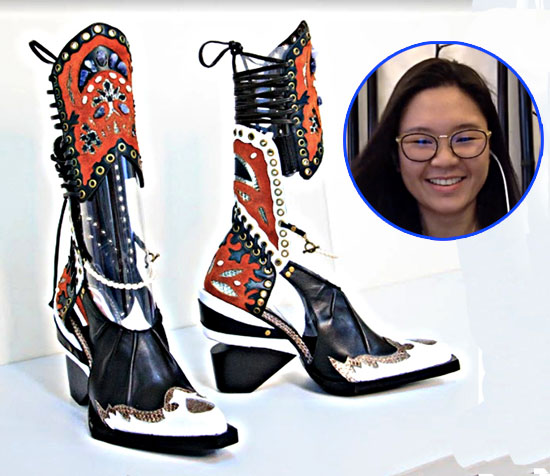 What it is:  Apostol says, “The design was sparked by an event in my life when a good friend of mine got married in Tagaytay when the Taal volcano erupted. The photos they sent us back in Manila looked so beautiful but also so destructive.”

Consequently she chose colors close to nature: earthy tones and organic textures, and used gems such as amethysts and pearls. “I was inspired by natural forms, shown in the floral cutouts, pleating that resembles waves in sand dunes and a body-conscious lacing that follows the curve of the leg, all contrasted by a structured outsole and sculpted geometric heel.”

She wanted to highlight the abilities of our local artisans by challenging them to bring her shoe to life. “The complex layering of the materials and fine detailing are testament to the capabilities that the local footwear industry is at par with many of the giants around the world,” Apostol said.  “Sierra is my love song to Filipino footwear, showcasing just how good we are, and how much we should keep supporting and nurturing our local talents.” 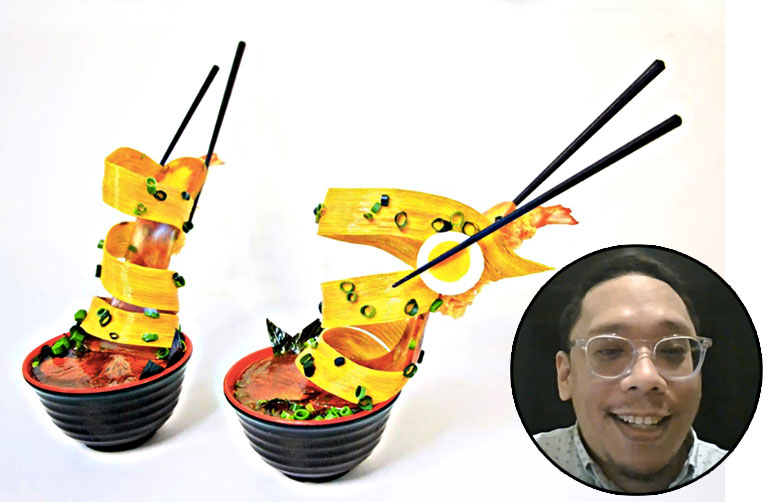 What it is:  Writer Wijangco dedicated his shoe to his sister, who’s suffering from cancer.  “She's a very brave and hardworking woman, and one of the things that she used to order whenever she's here visiting from Japan would be the ramen — it’s one of her favorites.”

He thought it would be fun “to take this innocent little bowl of noodles and make it the hero of its own fairy tale. So it's a campy and humorous piece, and I think that it's something we need right now in this time of anger and fear and bad news.”

The heelless shoe defies gravity; Wijangco changed the angle of the sole and put most of the weight in the platform at the ball of the foot, and used unconventional materials like plastic, chopsticks, rubber, and an insole of resin and fiberglass. “It’s a crazy, crazy recipe,” he laughs. “This is a flight of fancy that shows us that the impossible, can be possible.” 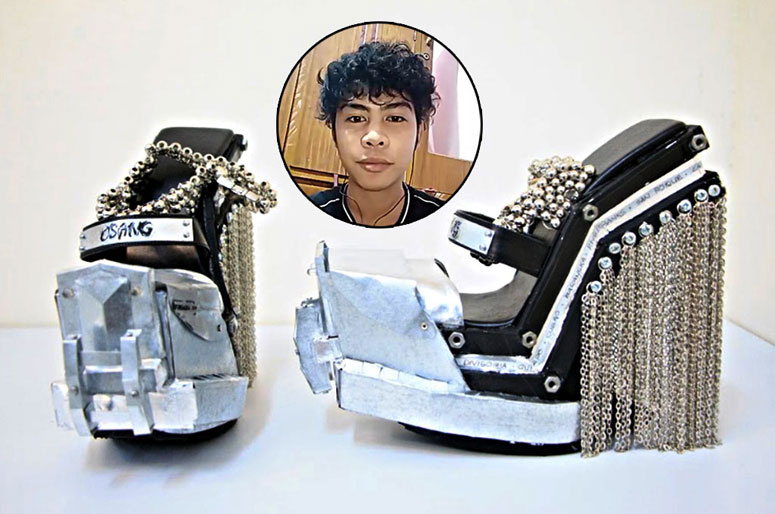 What it is:  Growing up, the jeepney was the primary source of income for Paler’s family. “Aside from my father being a jeepney driver, my mother used to be a barker,” he says. “The design is influenced by my mother, Osang, who embodies the color I chose for my work. Silver represents hope and genuineness, while black represents class in boldness. I combined the colors to show the character of my mother: being courageous, fierce and the symbol of a genuine person.”

Paler’s shoe is predominantly made out of steel “to represent how strong she is as a woman” — thin, lightweight metal sheets lined with leather, and chains swinging at the “heel.”  (The designer says the shoes are actually heelless.)  “This artwork is the product of mother's love.” 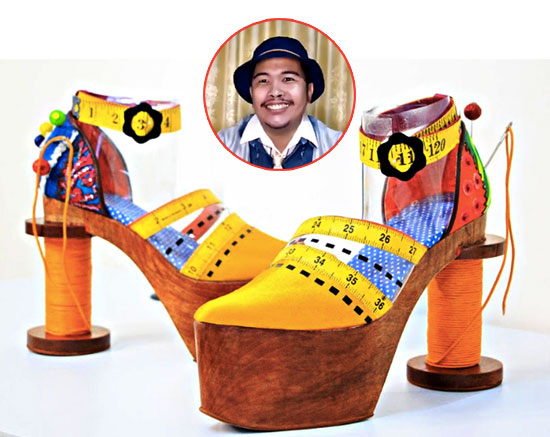 What it is:  “A love letter to the fashion and design industry,” says Bawar. “Named after a popular kundiman or traditional Filipino love song by National Artist for Music Levi Celerio, it features a base inspired by the lowly bakya, with heels resembling thread spools made of repurposed lawaan and santol wood.”

The shoe upper is an assemblage of fabric scraps and excess materials, diminishing its carbon footprint and impact on the environment. “It also represents the diversity of products in the design environment industry,” adds Bawar. “Lace represents gowns, denim represents jeans, and faux leather materials represent shoes and handbags. Materials such as pins, needle, thread and tape measure were also incorporated into the piece, highlighting the tools of the trade while at the same time giving it a whimsical, trompe l’oeil feel.” 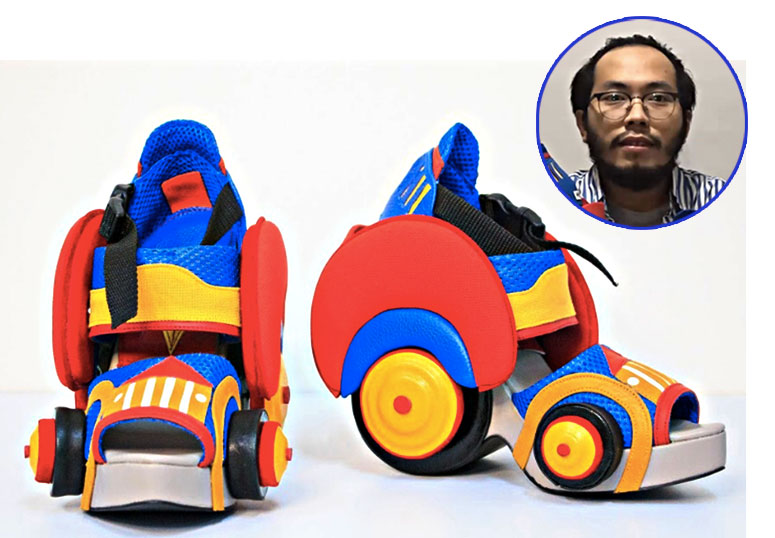 What it is:  “It’s a symbol of the resilience and creativity of the Filipino, inspired by the military jeeps of American soldiers that Pinoys made their own,” Marter said in Tagalog.  “It’s also a symbol of bayanihan,” referring to the fact that many Pinoys had a hand in the making of his shoe.

“Prominent colors are the blue, yellow, red and white in the Philippine flag, which means equality, peace, justice and valor — elements you can see in every Filipino who rides and commutes,” Marter adds.

He put elements of the traditional jeep in his design, like the upholstered seat, wheels in the heels that actually spin, powered by a battery-operated motor, a fender, engine, even the seatbelt of the driver.  “The engravings and images on our jeeps show that the Filipino is religious, so on the plate number I wrote ‘Hebrews 13:16,’” Marter says.  “I finished college because of the free rides the jeepney drivers gave me, who became my heroes during my time of need.” 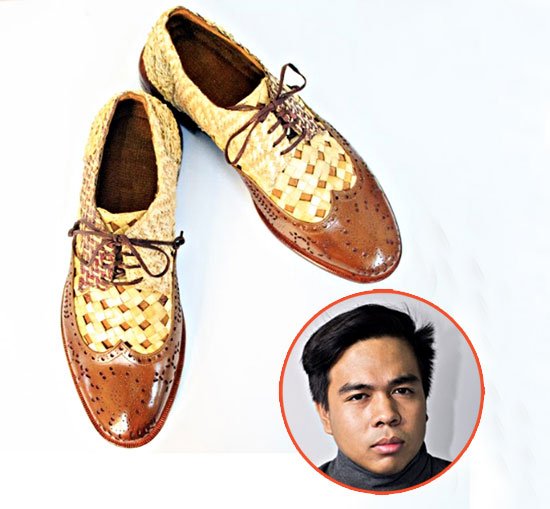 What it is:  “In the 15th century, according to images in the Boxer Codex, Filipinos wore no shoes,” Fabia explained in Tagalog.  “Agriculture and fishing were our primary industries, so shoes were not natural to us.  The Japanese introduced slippers to us through trade, and when we were colonized by the Spanish, they persuaded us to wear western clothing, including shoes.”

He says all these influences are embedded in the culture of our country, and informed his shoe design.  “A showcase of Filipino world-class art, talent and culture, Hibla Habi is a shoe woven with fibers from abaca, rattan, buri and tikog (showing our art of weaving), heels made of carved wood (highlighting Filipino sculpture) and a toe cap ornamented with brogue patterns resembling the art of pagbabatok that brings the message of ‘one sun, one moon for one earth’ — harmony and unity for everyone.” 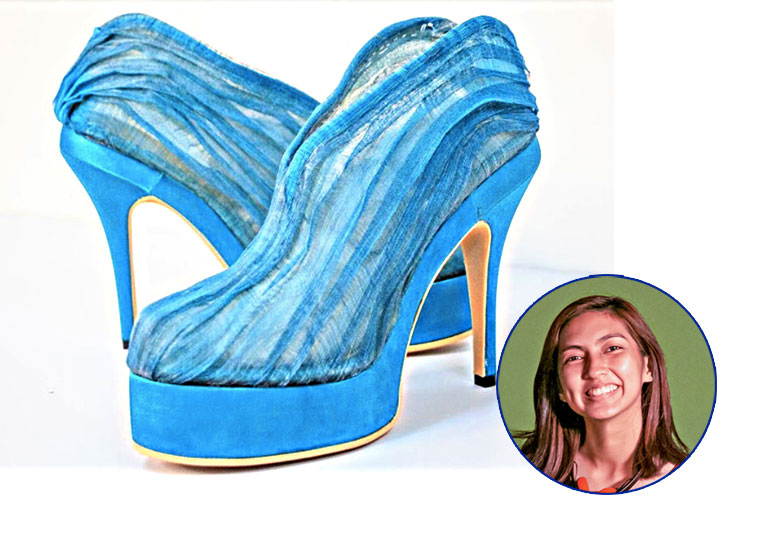 What it is: “Kalinaw” is a Filipino word that stands for tranquility and serenity. “The project started out as a form of therapy for me,” Paman says. “It’s a reflection on stereotypes and how sometimes the way we view people and the way we view ourselves limits us.”

She envisioned the woman who would wear her shoe as “the type that spends her days trying to win executive board agreements with her guy bosses, who will have to transform herself at night to be a mom to her kids and want to go out and have fun and be useful. So the design had to embrace femininity, but also display a subtle strength and firmness.”

Paman took inspiration from bodies of water, because she felt they integrated the qualities of power and calm, beauty and subtlety. “I adapted water into the form of the shoe: the waves and lines come from streams and waterfalls. The main material I used is piña silk, deemed the queen of Filipino fiber.”