Grammy-award winner Lizzo, a poster girl for self-love and body positivity, uses her massive platforms to promote her advocacies including size representation in media, diversity and inclusivity.

The Juice singer made waves recently for posting an unedited and naked Instagram photo to “change the conversation about beauty standards.”

She wrote in the caption that she would normally edit her photos, fixi her belly or smoothen her skin, but for her now viral photo she tells her followers, “I wanted to show you how I do it au natural.”

People are offended by the term “fat” and, at times, the physically fat. But the 32-year-old singer isn’t and she is making it known not just with her social media posts but also with her feel-good music, electrifying onstage performances, and music videos.

The Queen of Self-love that she is, Lizzo will continue to do what she is doing—no matter how uncomfortable it is to others.

Here are four times Lizzo pushed forward with the movement to embrace her luscious curves and smash society’s unrealistic and abrasive beauty standards.

Lizzo continues her fight against “fatphobia” and fat-shaming and she made it known when she took on the “all-angles” trend on TikTok.

In her post on TikTok, which was also posted on Instagram, Lizzo, in a white bikini, posed from all angles while using the audio of a popular TikTok trend started by user MaryCjSkinner.

The all-angles trend was meant to show poses that are “figure-flattering” and “unflattering” when taking photos. But instead of doing the poses for the trend, Lizzo proudly showed off her legs, back, stomach, and even playfully touching her love handles.

Lizzo captioned her post, “Wild to see the body positive movement come so far. Proud of the big girls who gave it wings. My body is changing but I’m gonna keep appreciating it from every angle.”

She puts body-shamers in their place

There will always be detractors and body-shamers that target Lizzo for her revealing photos and videos on social media, most of them criticizing her weight, including The Biggest Loser coach Jillian Michaels.

But the Good As Hell singer almost always puts these critics in their place with her clapbacks.

In a post last year, Lizzo slammed body-shamers with a workout video that went viral. “So I’ve been working out consistently for the past five years, and it may come as a surprise to some of y’all that I’m not working out to have your ideal body type,” she said in the clip.

She continued, “I'm working out to have my ideal body type. And you know what type that is? None of your f***ing business because I am beautiful, I am strong, I do my job, and I stay on my job."

In the same video, Lizzo tells her followers, "Health is not just determined by what you look like on the outside. Health is also what happens on the inside. And a lot of y'all need to do a f***ing cleanse for your insides. Namaste, have a great day."

When Lizzo performs, may it be in a tiny desk or at a massive music festival, she always makes sure they are explosive and out of the box.

Her performances are always energetic, that she matches with outfits that are truly liberating. As a classically trained flutist, she also often brings out her flute she lovingly calls “Sasha” to do heroic solos.

And to accompany her in her performances are her troupe of dancers, who are mostly plus size and are women of color.

One example was her first performance at the 2019 BET Awards with her hit song Truth Hurts. Lizzo donned a bridal-inspired mini-dress as she navigated the stage. People were on their feet until the end of the performance, which even got a standing ovation from another queen, Rihanna.

She stands for what she believes in and lives it

When Lizzo was called out by some of her fans for "selling out to diet culture" by promoting a 10-day smoothie cleanse, she stood her ground and told her critics, “Every big girl should do whatever the f*** she wants.”

In the video, she detailed her 10-day smoothie cleanse journey and shared that she decided to do it after her vacation in Mexico where she ate a lot of food that messed up her stomach.

Following the backlash, Lizzo posted an Instagram story to respond and explain her decision to get on the smoothie cleanse, sharing that she would normally be “afraid and ashamed” to post things like it because “I feel like as a big girl, people just expect if you are doing something for health you’re doing it for like, a dramatic weight loss. And that is not the case.” 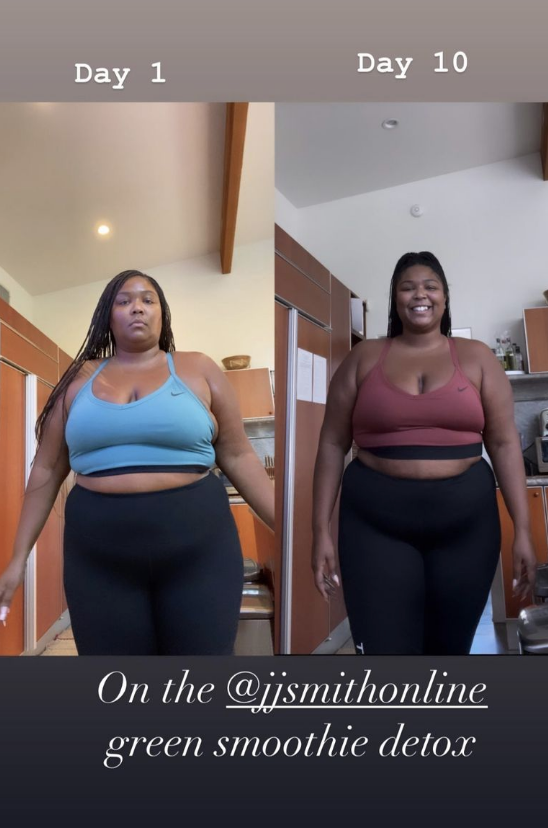 Lizzo, who had been openly sharing about her vegan diet and new workout routines on social media, said she is proud of herself and the results of the cleanse, which improved her sleep, hydration and mental stability.

“I’m a big girl who did a smoothie detox, and I wanted to share that with you guys. I got exactly what I wanted out of it, and every big girl should do whatever the f*** they want with their bodies.”

In a separate Instagram post, Lizzo, who perhaps acknowledged the possible effects of her post to other people, wrote a message to her followers. “Please do not starve yourselves. I did not starve myself. I fed myself greens, water and fruit and protein and sunlight. You don’t have to do that to be beautiful or healthy.”

She concluded, “That was my way. You can do life your way. Remember, despite anything anyone says or does, DO WHAT YOU WANT WITH YOUR BODY.”