More than a year into the pandemic, the country’s response against COVID-19 got its much needed and much delayed shot in the arm with the arrival of vaccines made by Sinovac Biotech Ltd. of China and AstraZeneca of United Kingdom.

After months of negotiation and waiting, the country received the first shipment of of 600,000 doses of Sinovac vaccines donated by the Chinese government last Feb. 28.

This paved the way for the start of the country’s inoculation campaign on March 1 among healthcare workers at the National Capital Region. On March 4, the country received 480,000 doses of AstraZeneca vaccines and another 38,400 doses four days later.  These were rolled out on March 7.

The AstraZeneca vaccines  are all donations through the COVAX Facility, a global collaboration to accelerate the development, production and fair and equitable access to COVID-19 tests, treatments, and vaccines.

The COVAX Facility is co-led by the World Health Organization (WHO), Gavi and the Coalition for Epidemic Preparedness Innovations (CEPI).  It has committed to provide vaccines for 20 percent of Philippine population.

According to Health Secretary Francisco Duque III, acquiring vaccines is a “daunting task” due to the global shortage of the anti COVID-19 jabs. He said that 10 rich countries have already secured 75 percent of the global supply.   Duque noted the country could achieve herd immunity within a year if they can inoculate 450,000 people daily.

The initial goal is to vaccinate 70 million of the population to achieve herd immunity, a condition wherein even the unvaccinated ones are protected.

As of March 15, the country has received a total of 1,125,600 doses COVID-19 vaccines from Sinovac and AstraZeneca, both two-dose vaccine brands.

The Department of Health (DOH) said March 22 that 336,656 doses have been administered as first dose in 929 inoculation sites nationwide.

Prior to today’s brifing, DOH data shows that National Capital Region, which is the epicenter of the soaring cases of COVID-19 in the country, and Region 7 received the most vaccines at 278,870 doses and 110,760 doses, respectively.

Current deployment is limited to frontline health workers. Their vaccination is being done in batches to ensure adequate staffing in health facilities in the light of possible adverse events.

The vaccine recipients will be observed for up to one year for possible “adverse events” or the side effects of inoculation.

To carry out the vaccination activities, the Inter-Agency Task Force on Emerging Diseases came up with a vaccination roadmap detailing plans in acquiring and deploying  “safe and effective” vaccines against COVID-19.

National Task Force chief and vaccine czar Carlito Galvez Jr. underscored that the roadmap has six stages but the “most critical stage is the beginning phase.”

This involves the scientific evaluation and selection of the vaccines and the  Department of Health and the Department of Science and Technology (DOST) are leading this phase.

Galvez added aside from procurement, there are many “pathways” that the government is exploring to secure vaccines. 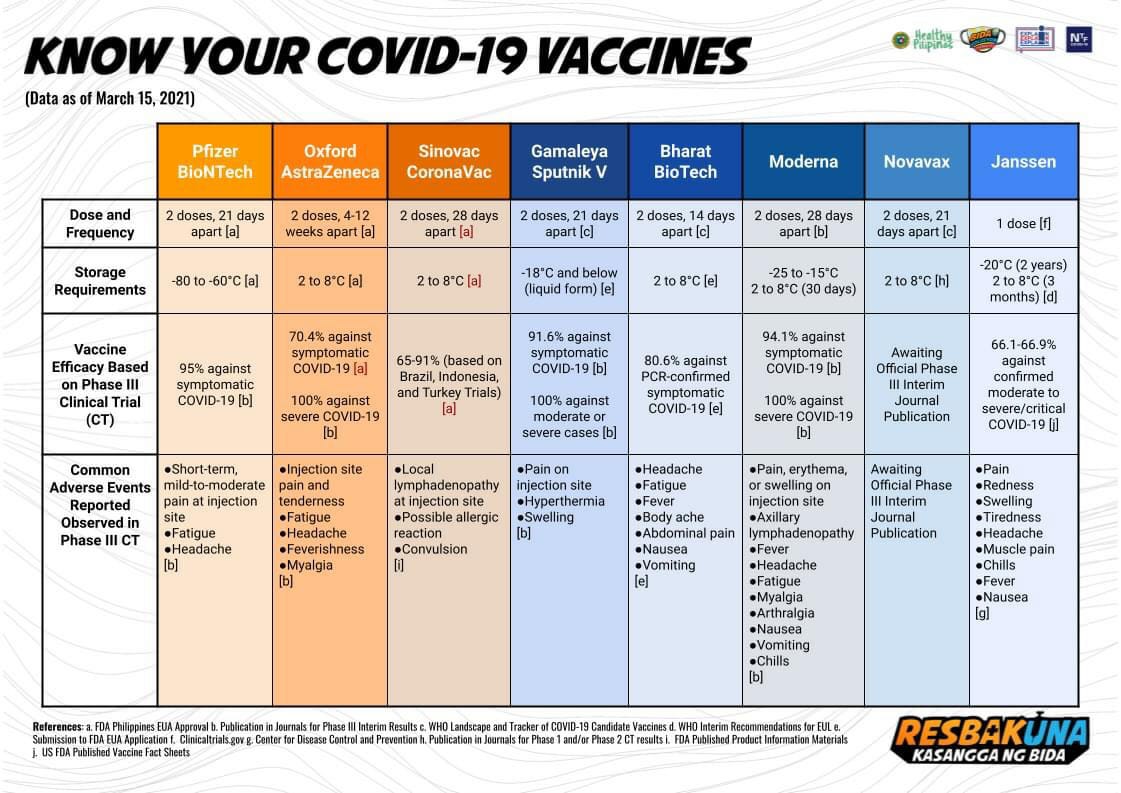 These are through the COVAX Facility, through donations and by participating in independent clinical trials of vaccine manufacturers and the WHO Solidarity Trial for Vaccines.

But to maximize the impact of inoculation, the government came up with a “priority list” of recipients.

Categorized as “priority eligible A” are healthcare workers who are the most at risk of contracting the virus due to their exposure to COVID-19 patients.  They are followed by the senior citizens who are vulnerable given, their age and possible co-morbidities such as diabetes, hypertension and heart ailments, among others.

Next are adults with co-morbidities, frontline personnel in essential sectors, both in public and private,  including uniformed personnel and poor population.

Listed in “priority eligible B” are the teachers, social workers, other government workers,  other essential workers, and overseas workers, among others.

Last week, Galvez announced that the mass vaccination of Filipinos may kick off in May as they expect the inoculation of some 1.7 healthcare workers to be completed by mid-April.

After all of the 525,000 doses from AstraZeneca has been used up, the country is expecting to receive another batch of 979,000 doses from the British company this month.

Also, an agreement has been signed between the government and the private sector led by businessman Enrique Razon Jr. and United States biotech company ModernaTX for the delivery of 20 million doses of Moderna vaccines.

Of this, some seven million will be for the frontliners of the private sector while some 13 million for the government.

The business sector is also helping the government’s vaccination by having tripartite agreement with vaccine manufacturers.

Early this year, the private sector and the local government units, led by Presidential Adviser for Entrepreneurship and Go Negosyo founder Joey Concepcion, have procured some 17 million doses of AstraZeneca through tripartite agreements.

Some 2.5 million doses are expected to arrive May or  June  while the balance will be delivered in the third quarter of the year on a staggered basis.  A part of the vaccines will be donated to the government.

Aside from this, the government is still hoping to get 117,000 doses of vaccines from United States’ drug maker Pfizer-BioNtech.

Galvez also said the Philippines has inked a supply agreement with Serum Institute of India.  The deal secures some 30 million doses of Novavax vaccine which may arrive by third or fourth quarter of the year.

"We hope that our leadership be replaced by a more competent Secretary of Health. Secretary Duque must resign for the betterment of our health," the FNU said in a statement.https://t.co/TqPpqmn9ae

Last Friday, he announced the country will also order some three million doses of Sputnik V vaccine made by Russia’s Gamaleya National Center of Epidemiology and Microbiology.

“Our initial request is for them to deliver more or less three million doses this coming April or May,” he added.

Sputnik V became the the world’s first registered vaccines against COVID-19 in Aug. 2020 after it was registered by Russia Ministry of Health.

It is the latest drug maker to receive emergency use authorization (EUA) from the Philippines’ Food and Drug Administration  (FDA) last Friday, paving the way for its entry in the country.

Prior to this, the FDA also granted EUA first to Pfizer on Jan. 14 and then to AstraZeneca on Jan. 28, and Sinovac on Feb. 22.  Still pending is the EUA application of Bharat Biotech Covaxin of India.

Aside from seeking EUA, Sinovac also applied for applications to hold a clinical trial in the country and this was approved by FDA.

The applications for clinical trials by China’s Clover Biopharmaceuticals and Janssen of Johnson & Johnson of the United States have already been approved by the FDA.

As of March 16, there are 264 COVID-19 vaccine candidates worldwide.

A report of the Atlanta-based Center for Disease Control and Prevention (CDC) showed that multiple variants of COVID-19 are circulating around the world.

“Viruses constantly change through mutation, and new variants of a virus are expected to occur over time. Sometimes new variants emerge and disappear,” stated in the CDC website.

But other times,  new variants emerge and persist.

The United Kingdom says it has detected two cases of the new variant first found in the Philippines called P.3, coinciding with the new travel restrictions imposed by the Duterte administration. | via @onenewsph https://t.co/uRiIKowjqo

Of these three, it is the South African variant that is feared to impact on COVID-19 vaccines because it was found to contain “immune escape,” thus possibly affecting the efficacy of the vaccines.  These findings, however, are not conclusive as they are based on only on a small study abroad.

Two weeks ago, the first case of Brazil variant was detected in the Philippines in a returning overseas Filipino in Western Visayas who came from Brazil.

At the same time, the DOH said that a new variant of COVID-19 —named as P.3—was first detected in the Philippines through the genome sequencing done by the Philippine Genome Center and University of the Philippines-National Institute of Health.

But while the P.3 variant has never been detected anywhere else, the DOH brushed aside insinuations that it is a Philippine variant. The agency added there was not enough evidence that P.3 is a variant of concern.

Data shows that a total of 104 cases of the P.3a are recorded in the country.

Sheila is a reporter at the Philippine STAR and is currently covering elections and health. She is struggling to study Thai, Vietnamese, Korean and Japanese cuisines on her own.

Aunt drives for months in US with dead kids in trunk