Donald Trump has gone in the books as the first US President in history to be impeached twice. The House of Representatives voted 232-197 to impeach Trump for inciting a mob of his supporters to attack the US Capitol on Jan. 6, which left at least five people dead.

Though many, including celebrities and prominent personalities, took a jab at Trump’s fate, many also ask what happens next.

After the House charged Trump, it is now up to the Republican-controlled Senate whether to convict him or not. Sixty-seven senators are needed to convict him, which means the Democrats need at least 17 Republican senators to support the conviction.

So far, there are a few senators who are reportedly most likely to support the conviction, including Sen. Mitt Romney of Utah, Sen. Lisa Murkowski of Alaska and retiring Sen. Pat Toomey of Pennsylvania.

However, Senate Republican majority leader Mitch McConnell won’t bring back the Senate, which is currently on recess, until Jan. 19, a day before President-elect Joe Biden’s inauguration. This means, Trump's trials will conclude under Biden’s presidency, where Democrats will take the majority of the Senate.

Though it has been widely debated whether the US Senate could still impeach Trump even when he’s no longer the president, many believe that “late impeachment” is constitutional. The trials would at least take a few days.

Senators could vote to bar Trump from holding office in the future. If convicted in the Senate, he could also lose the lifetime benefits of former presidents under the Former Presidents Act, including a pension of $219,200 per year (as of January 2020), Secret Service protection and medical insurance.

What celebs are saying on Trump's second impeachment?

After Trump’s second impeachment, many reacted on social media, including celebrities, who have been closely watching events unfold.

I didn’t even know you could be impeached twice. I thought it was like dying

Chrissy Teigen, a vocal critic of Trump and was eventually blocked on Twitter by the outgoing President, said in a tweet, “I didn’t even know you could be impeached twice. I thought it was like dying.” 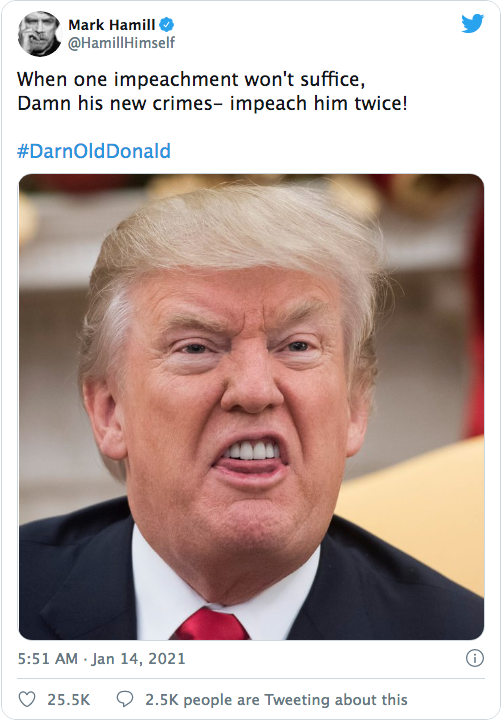 Star Wars actor Mark Hamill, who is known for frequently shutting down Trump on social media, tweeted a photo of seemingly angry Trump with the caption, “When one impeachment won’t suffice, damn his new crimes—impeach him twice!” 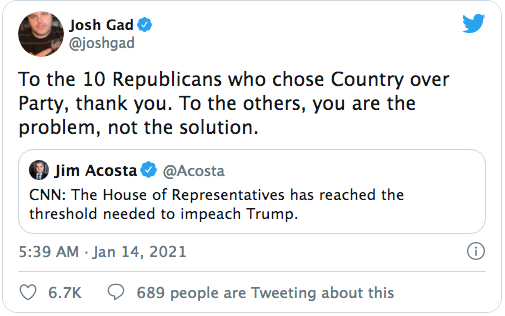 Actor Josh Gad addressed the 10 Republican lawmakers who backed Trump’s impeachment and rebuked those who did not.

Even known staunch supporter of Trump, journalist and political commentator Geraldo Rivera posted a two-minute video clip on Twitter calling for Trump’s impeachment, saying that a “eureka moment” happened to him following the deadly attack in the US Capitol.

#DonaldTrump should be Impeached. He should know history is judging him whether or not he is convicted and removed from office. He should also apologize to the families of those who lost their lives. His actions were inexcusable & undeniable. This time, he did it. pic.twitter.com/IAh57UuhI6

"I wrote: 'A loyal friend hounded without mercy by Democrats intent on destroying him day one... but then he lost the election and losing the election made Donald Trump crazy. It revealed the dysfunction in him that I refused to see."

Some also took notice that as a lot of news publications gave prominence to what was supposed to be the biggest news of the day, the tabloid newspaper New York Post conservatively reported on Trump’s second impeachment.

The New York Post is a conservative-leaning tabloid and is reportedly Trump’s favorite newspaper. It is under News Corp., a holding company of Rupert Murdoch, known to be a “very good friend” of Trump.

In contrast with its coverage on Trump's second impeachment, the Post, which has endorsed Trump twice, had an extensive coverage recently on the Capitol attacks with a frontpage cover of some of the Trump supporters who stormed in the Capitol with the headline “Rebels without a clue.” Some people called the move “better late than never,” while others call it “downright hypocritical” and “inconsistent.”

Blake Lively, Justin Baldoni to star in Colleen Hoover's 'It Ends with Us' film adaptation