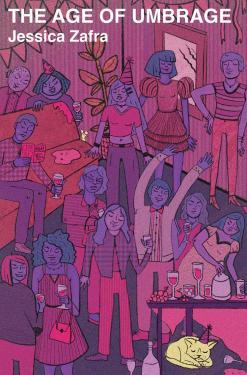 Jessica Zafra once took umbrage when I suggested one of Haruki Murakami’s novels was a doorstop. “That’s not a doorstop,” she scoffed, referring to The Wind-Up Bird Chronicle’s scant 640 pages. Things like Dune fit in the “doorstop” category, she chided, or David Foster Wallace’s Infinite Jest.

At 126 pages, Zafra’s first novel, The Age of Umbrage, is no doorstop either. It’s probably technically a novella, falling below 40,000 words (I would guess). But it’s no less packed with wit and invention than other, lengthier literary outings out there.

Those familiar with Zafra will know her take on things. An arch revelation of something patently absurd, usually within Filipino society. Sometimes a paragraph constructed largely to service a punchline. A thready comparison that ticks and ticks until it explodes like a humor IED.

In The Age of Umbrage, Zafra builds an engaging bildungsroman out of the details we have come to know and barely register anymore in day-to-day Philippine life. Set in the ‘80s, the story follows Guadalupe (“Guada”) de Leon, daughter of Siony and Hernani, as she navigates growing up and making sense of things against a backdrop of martial law, EDSA, and Cory-era coup attempts — also Star Wars, David Lynch, Transformers, Madonna and Duran Duran. Cats play a significant role as well.

Siony, with her college education, wants to be something more than just a public school teacher. When Nani disappears into the world of OFWs and extramarital affairs, she’s forced to raise Guada herself, cooking cafeteria food to sell on the side. Her fortunes shift when Spanish-bred Don Paquito tastes her pinangat in a company cafeteria and offers her a job in the Almagro mansion as the cook. Her daughter Guada is installed at Annunciation Covenant Catholic School, all expenses paid.

What seems like a Dickensian plot twist is an opportunity for Zafra to explore some universal truths with comic skill. She seems well aware of the telenovela dimensions existing just beyond the edges of her plot: it’s telegraphed by the overheard dialogue from Sharon Cuneta movies, bad radio soap operas playing in the streets, and even security guards feasting on romance novels. Zafra understands that, for those on the bottom rungs, life is telenovela, as when Don Paquito’s lovelorn former cook watches her boss enjoying the new cook’s menu. (“Each forkful he brought to his lips was a fork plunged into her heart.”)

Dickens also looms over this tale, either in direct references to Great Expectations or the prospect of better prospects, proffered by eccentric elderly dames, just around the corner.

But Zafra is not interested in happy endings. Guada claims she doesn’t know what the phrase means. When a book ends, “I can’t tell if the hero is happy. The story’s over.” Instead, nearly every paragraph is an arch précis on customs and local behavior, or a tightly wound ball of absurdity exploding in an incendiary punchline. Sometimes both.

It’s as though Zafra’s omniscient narrator is Jane Austen, reborn as an incautious tita, offering frequent asides on the intricacies of Manila social life (“It is a truth acknowledged in the Philippines that a single man in possession of good looks and no fortune must be in want of a benefactor, an older person of the female or homosexual persuasion”); or perhaps an inhabitant of Mars explaining how things really work to an incredulous John Carter.

It helps to have a main character — Guada — who is smart, sympathetic, and never far away from an acidic observation. More importantly, her grievances reflect and amplify our own. We totally get Guada’s disconnect from the phony layers around her. No wonder she finds succor and comfort in books, which don’t taunt or bully her. Guada may dwell in the era of Voltes V, but, boy, is she relatable.

The author confirms that The Age of Umbrage is generally autobiographical, was first conceived and written back in 2016, and that Guada’s early life is “a remix of my theory of world domination.” Zafra has inventive ways of working in her concerns, even in a slim novel. We read about 10 pages of Guada’s diary (in itals), get a pretty elaborate recital of the plot points of Dune (and how the Lynch movie compares to the novel), and much about her fascination with “Creatures of Lower Philippine Mythology” (manananggal, aswang and such) mingled with Catholic dogma. One early comical scene involves an attempted exorcism of Guada on a kitchen table.

Zafra’s eye for the grotesque remains undiminished, yet she retains her sharpest knives for the upper classes (those Almagro parties), leavening her take on the lower classes with sprinkles of sympathy. Here, like Dickens, troubles beset both rich and poor. When they fall on the rich, it’s comedy; for the poor, the result is more often tragedy. For Zafra, Guada’s mingling with the upper classes offers a fly-on-the-wall point of view of an outside world. She agrees that “the not-rich get way more sympathy. I think of my novel as being about borrowed privilege and how privileged assholes use theirs.”

Those who have been reading Zafra all these years will recognize many of her pet observations, woven into the narrative. But they’re woven skillfully, always aiding the narrative.

On superstition: “It was believed that a pregnant women’s cravings determined her child’s appearance and temperament.”

On the Filipino habit of shopping: “Filipinos, being accustomed to dealing with two dozen hurricanes a year plus the various natural catastrophes that arise from being on the Ring of Fire, reacted to rumors of revolution in the same manner. They went shopping.”

On pedestrian life: “Pedestrians are a lower life form in Manila, destined to become roadkill, deprived even of sidewalks, which are appropriated by vendors of radioactive-looking fried snacks.”

You’d have to go back to Holden Caulfield to find a narrator (or omniscient narrator in this case) whose worldview informs each paragraph at a molecular level. (The Catcher in the Rye has to be an inspiration; there’s even a reference to prostitutes “praying for more johns,” just like Holden imagines his old headmaster “praying for more stiffs.”)

And what is that worldview? Wry, aggrieved, with just a hint of melancholia. Alive to the comic potential in every outrage. Through Guada’s journey, we imbibe bits of foreshadowing (the sounds downstairs in the kitchen she hears at night), and get enough about the things she’s learned along the way to observe a character arc. From her father she receives a rigorously bubble-wrapped gift — shipped from UAE, no doubt — that will help her tune out the unpleasant babble of her daily life. And from her mother, she gains a subtle layer of understanding — about her self, her own choices, the nature of loss — that can only come from absence.

Though The Age of Umbrage could have gone on much longer, the length actually feels just right. Like the best coming-of-age tales, it ends before we know whether the hero or heroine is happy-ever-after. And it confirms what Guada — and possibly Holden Caulfield — believes: “A good book feels true. I don’t know. I can’t explain it. All I know is, I’d rather read a book than hang out with boring people.”

Print and ebook copies of The Age of Umbrage are available through ateneopress.org, Lazada and Shopee (P295).