Wouldn’t have pegged John Bolton as a Hamilton fan. The title of his tell-all, too-little-too-late memoir, The Room Where It Happened, comes from the Lin-Manuel Miranda musical, but it’s the only hip, topical reference you’ll find in his self-serving inside look at 17 months as Donald Trump’s former National Security Adviser.

Bolton is more apt to name-check Thucydides, Cato the Elder or Henry Kissinger than Hamilton, but wade through the long policy debates, and you’ll get a peek at one of the most tumultuous White House administrations in US history.

There are juicy bits, leaked before the book’s troubled publication (the White House sued to stop its release). According to Bolton, Trump:

• Fixated on sending a Trump-autographed copy of an Elton John CD containing the song Rocket Man to Kim Jong-un. “Getting this CD to Kim remained a high priority for several months,” writes Bolton.

• Lacked basic geopolitical and historical knowledge, seeming surprised to learn that Britain had nuclear capability, suggesting that Finland was part of Russia, and at one point telling White House Chief of Staff John Kelly “it would be cool” to invade Venezuela.

• Released a statement backing Mohammad bin Salman’s denial ofinvolvement in Washington Post journalist Jamal Khashoggi’s murder in the Saudi embassy in Istanbul, ostensibly to distract from his daughter’s bad press over using a personal email account. “This will divert from Ivanka,” he told Bolton. “If I read the statement in person, this will take over the Ivanka thing.”

• Delivered a mortifying thumbs up to Vladimir Putin’s denial of Russian election interference on a stage in Helsinki in 2018, which totally steamed Bolton’s grill.

• Apparently approved of China using concentration camps to lock up mostly Muslim Uighurs, telling President Xi Jinping through an interpreter that he should go ahead with building the camps, “which Trump thought was exactly the right thing to do.”

• Pleaded with Xi to buy more American soybeans, to help firm up the crucial rural farmer vote he needed and “ensure he’d win” a second term in 2020.

It was not the only time Trump reportedly reached out to foreign help for reelection. There was, of course, the infamous call to new Ukraine President Volodymyr Zelensky that resulted in House Democrats hastily cobbling together an impeachment. All of this Bolton espies from his place inside the room where it all happened, but even that “quid pro quo” phone call is delivered with a shrug. “In fact, I am hard-pressed to identify any significant Trump decision during my tenure that wasn’t driven by reelection calculations,” he says in his epilogue.

Of course, the brushback against Bolton’s book is that he could have spoken out earlier, during impeachment or any time when the alarm bells started going off, instead of pocketing $2 million for a tell-all account. But I think Bolton was thinking more about his imprint on history, in laying out this detailed (he took copious contemporaneous notes) account of his 17 months, than about aiding the Democrats or answering to the press.

That doesn’t make it admirable. Truth is, Bolton and Trump shared a lot of common ground — they’ve both lashed out at NATO deadbeats for not paying their tab, and Iran going nuclear, and China eating America’s lunch, economically — which is probably why the former US Ambassador to the UN and Fox TV pundit sniffed around for so many jobs in the nascent Trump administration — moving down from Secretary of State, finally settling for National Security Adviser. Like so many who entered and exited the revolving door next to Trump, he probably thought he could change the man.

Didn’t happen. Yet he was there. And he saw things. And we get a front-row peek at all the icky revelations.

What emerges is a typical workplace where all employees fear the boss’s scowling outrage, and end up scrambling around like rats trying to avoid getting caught in the trap. A bad workplace, in other words. You wonder why people lust after such a position in the first place. (One word: POWER.)

The difference in this memoir, as opposed to other fly-on-the-wall books we’ve seen, is that Bolton is a staunch conservative. He was against an Iran nuclear deal, against seeking a peace deal with North Korea, and for the US pulling out of the Paris Climate Accord. He’s no Barbra Streisand Hollywood liberal. He thought he could do a Henry Higgins on Trump, get him to crack down on China and Russia. Yet the US president seems to think only transactionally, in terms of “deals.” (Usually bad ones, in Bolton’s view.) And that’s why his finally throwing up his hands and saying Trump’s White House is hopeless is actually a big deal.

Trump, predictably, went into his “I hardly knew the guy” routine, claiming Bolton was a “loser” and a “dope” and “I gave him a chance.” He did this while suing to stop publication of Bolton’s memoir. And of course, he claimed Ol’ Shaggy ‘Stache was simply an “embittered” former employee. (Seriously, are there any other kind of former Trump employees?)

Whenever Trump shrugs and says he didn’t know the guy he picked would be so incompetent, the media should buckle down and press him with this: “Why, Sir, do you keep hiring people who, it turns out, are losers and dopes? Is there perhaps a flaw in your hiring process?”

In case we need extra proof that Bolton is doing major CYA work here, there is a telling moment in the epilogue where he disavows blame for “closing down” the National Security Council biosecurity team before COVID hit. He claims the council was merely absorbed into a bigger department, to increase efficiency.

“The idea that a minor bureaucratic restructuring could have made any difference in the time of Trump reflected how immune bureaucratic pettifoggery is to reality. At most, the internal NSC structure was no more than the quiver of a butterfly’s wings in the tsunami of Trump’s chaos.”

Add to that this salvo:

“Thus, responding to the coronavirus, the NSC biosecurity team functioned exactly as it was supposed to. It was the chair behind the Resolute desk that was empty.”

Mostly, what emerges in Bolton’s book is a disconnect between the National Security Adviser’s broader policy goals and Trump’s instant gratification. Take the infamous “love letter” from Kim Jong-un. “The letter was pure puffery, written probably by some clerk in North Korea’s agitprop bureau, but Trump loved it,” writes Bolton. “This was the beginning of the Trump-Kim bromance.”

Secretary of State (Mike) Pompeo, Kelly and I gave Trump another Kim Jong Un letter on September 10, which he read in the Oval, commenting as he went, “This is a wonderful letter,” “This is a really nice letter,” and “Listen to what he says about me,” followed by his reading one oleaginous passage after another. As Kelly and I said later, it was as if the letter had been written by Pavlovians who knew exactly how to touch the nerves enhancing Trump’s self-esteem. Trump wanted to meet Kim, and he didn’t want to hear anything contrary, which is probably why he didn’t want to hear me explaining that another meeting soon was a bad idea.

Of course, it ends with the White House boss reminding his subordinate exactly whom he’s working for: “You have such hostility,” Trump tells Bolton. “Of course, I have the most hostility, but you have a lot of hostility.”

President Trump’s erstwhile National Security Adviser John Bolton spills about “the art of the trade, how the sausage gets made” in his tell-all account. 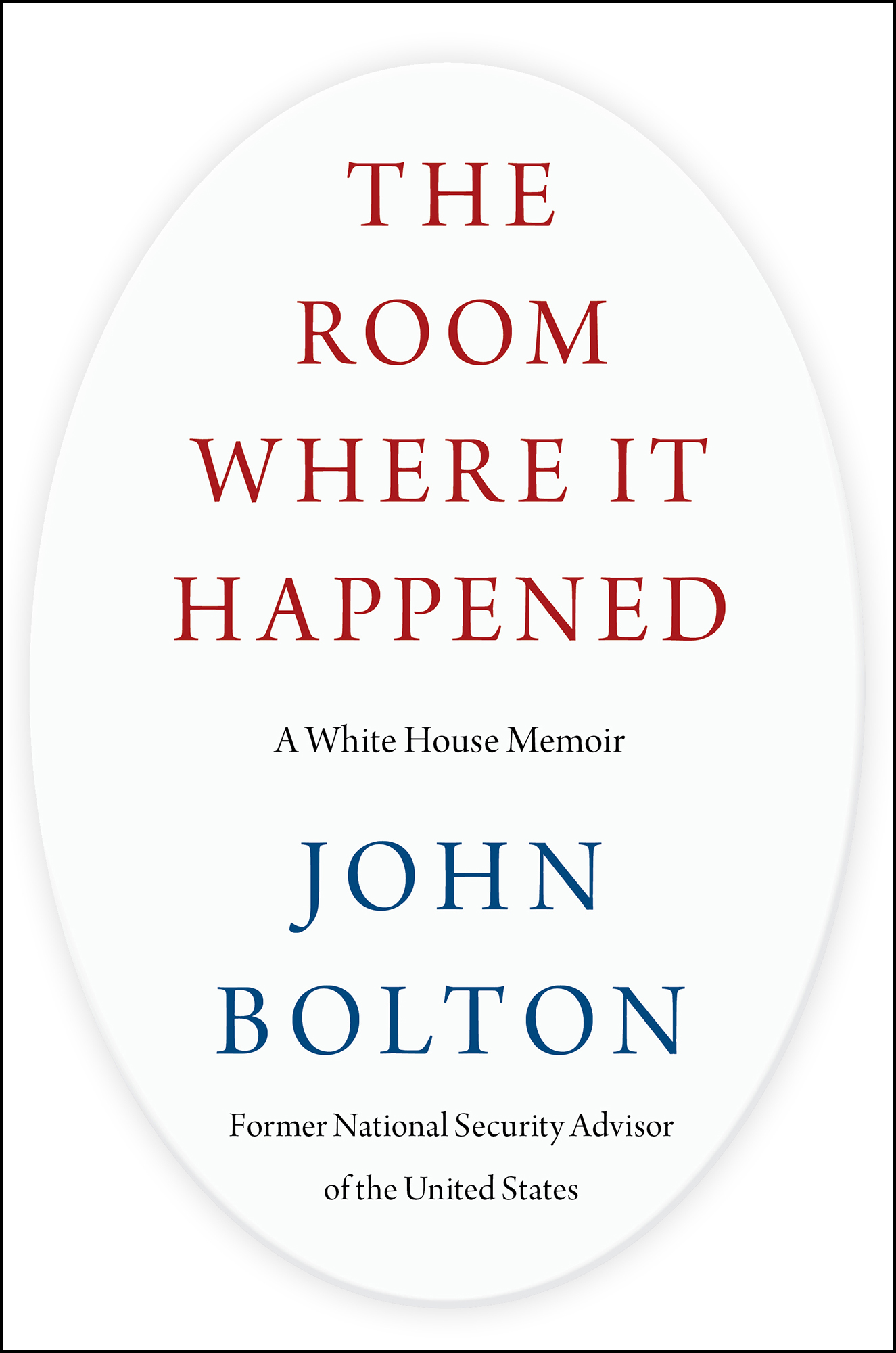