Style Living Self Celebrity Geeky News and Views
In the Paper Shop Hello! Create with us
The Food Network

Ever since I came across Ree Drummond’s cooking show on the Food Network, I try never to miss a single episode. Like millions of her followers, I got hooked on watching The Pioneer Woman on TV.

Perhaps one reason her show is so popular is that it’s relatable. Her cakes and casseroles, her pastas and pizzas, her soups and sandwiches not only look delectable, they’re also doable.

Drummond utilizes everyday ingredients that are readily available, and cooking techniques that are easy to follow. She’s not averse to using canned or bottled preparations, such as sauces and beans, when preparing meals, and uses them to great advantage: they not only make cooking faster, they also enhance whatever dish she’s preparing.

The interplay of colors – pink, purple and blue – makes this ice cream especially appealing to children. And, true to its name, the ice cream does remind one of the famous fairytale character.

In contrast to food snobs, she’s a very practical cook, and that’s one of the things that endears her to her fans.

If Drummond is so adept at communicating her ideas, that’s because she started out as a journalism major at the University of Southern California (she later shifted to gerontology). Before becoming a TV culinary star, she wrote a food blog, which reportedly acquired 13 million page views a month. It was this overwhelming popularity that prodded the Food Network to give Drummond her own TV show.

In fact, her show has been so successful she now has her own empire. Aside from the TV show, she also has a magazine, has written several bestselling cookbooks, and has her own brand of products, which are sold in Walmart in the USA (here in Manila I’ve seen a few of these products being sold in S&R).

The products range from kitchen appliances such as blenders, toasters and food processors, to storage containers, cutlery, dinnerware and even seasonings and spices. She has also come up with her own clothing line, which includes colorful tops like the ones she wears on her shows, as well as summer dresses.

Adding to the appeal of her show is her country kitchen. Both rustic and modern, it exudes a warm, welcoming atmosphere conducive to preparing hearty family meals.

Drummond lives in a remote cattle ranch in Oklahoma with her husband, Ladd, and their children: Alex, Paige, Bryce, and Todd.

One of the recipes she once demonstrated on her show is mermaid ice cream. Typical of the dishes she prepares, this recipe uses only everyday ingredients available in the supermarket, such as cream, condensed milk, and powdered sugar.

Perhaps the biggest outlay would be the three kinds of food coloring and the sprinkles. (These are available in supermarkets and in shops selling baking ingredients.) And though this is an ice cream, it doesn’t even require an ice cream maker. An ordinary electric mixer will do.

Ice cream offerings in Manila that are so drool-worthy, you won’t believe they’re plant-based

The interplay of colors — pink, purple and blue — makes this ice cream especially appealing to children. And, true to its name, the ice cream does remind one of the famous fairytale character.

P.S. I personally tested this recipe, and it was a big hit with my extended family. In Australia my sister Cora also tried the recipe, and its result was quickly gobbled up by her grandchildren.

(Adapted from the recipe of The Pioneer Woman) 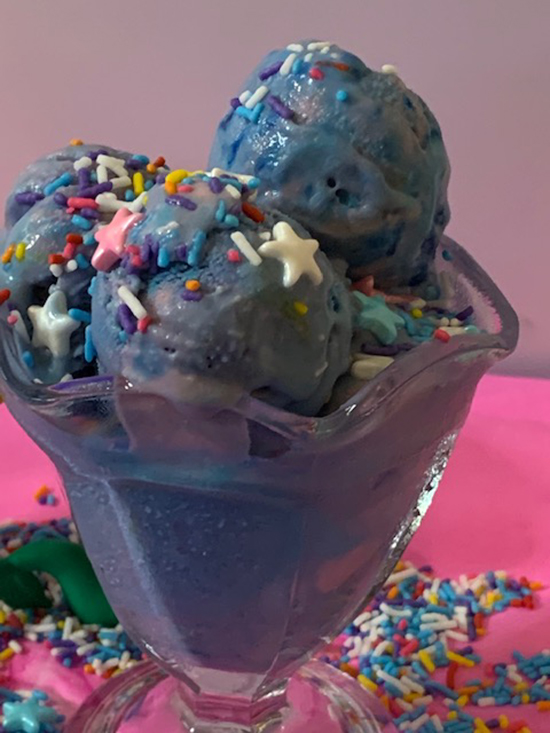 Chill a loaf pan or a glass dish in the freezer. In the bowl of an electric mixer, combine the cream, sugar and vanilla extract, and whisk until stiff (use a whisk attachment if your mixer has one). Do not over mix or it could liquefy. Gently fold in the condensed milk.

Divide the mixture into three equal portions in three separate bowls. Add the blue food coloring into one bowl and using a spatula, mix until it’s evenly colored. Do not over-mix. Repeat with the other two bowls, using the purple food coloring and the pink food coloring. Spoon the three different mixes alternately into the chilled pan then use a skewer or spatula to swirl them together. The mixture should come out multi-colored.

Top with the assorted sprinkles and cover the container tightly. Freeze several hours or overnight. Scoop into individual dessert bowls or ice cream cones and top with additional sprinkles if desired.

The Pioneer Woman airs on The Food Network. Check your local listings for the schedule.

Norma Olizon-Chikiamco divides her time between writing about food and writing stories for children. But sometimes she gets them all mixed up, as when she wrote “Pan de Sal Saves the Day,” and named the children after different types of bread. The Palanca Award-winning story published by Tuttle Publishing in Vermont, USA, now has a companion activity book. At home, her husband Calixto and daughters Pia and Clarissa call her “The Boss.”