While most restaurant owners would claim they only sell the best-tasting food in the world, Feigang Fei, owner of AuntDai Chinese restaurant, is taking a different tact.

The Chinese entrepreneur began attracting many new customers to his Montreal-based diners because of his witty menu with his brutally honest review of the dishes.

It includes specialties like the Mouth-watering Chicken, which Fei described as a “very well-known” dish but “we are not 100% satisfied with the flavor and it will get better soon.”

“I am surprised that some customers still order this plate,” he continued. “In my opinion, our Sichuan Pepper Chicken Salad is better than this one.” 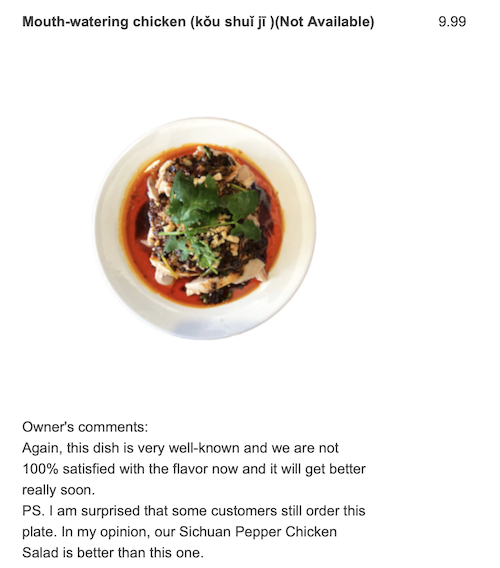 The Sichuan pepper chicken salad, on the other hand, is a “cold plate which gives you numbness from the Sichuan peppercorn. A lot of chili oil, too,” Fei said. “A bonus is it does NOT have bones. I recommend everyone to try this.” 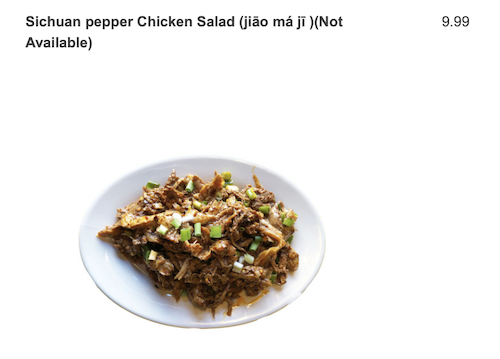 Similar to most food reviews online, Fei added short backgrounders on their menu,  too.

“This appetizer is prepared by myself and it's a secret recipe shared by my friend who is from ChengDu, Sichuan,” he added to his description of the Sichuan Pepper Chicken Salad.

“I know this friend for almost 10 years and only found out he is a Sichuan food master recently,” Fei continued. “After seeing our first restaurant at CDN (Cote-des-Neiges Street) destroyed by a fire, he came to me to offer his secret recipes, which he had so much confidence [in], to make our restaurant very popular among Chinese customers. He showed me how to make this plate step by step. From now on, I call him Shifu like KungFu Panda.” 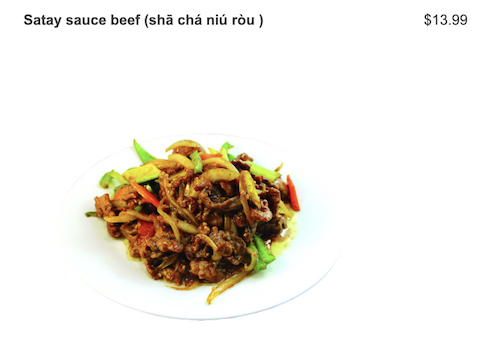 Fei wants to be honest to his customers, so much so that he even admitted not trying out their Satay sauce beef just yet. “This is new on our menu, I did NOT have a chance to try this one yet,” he stated. “According to a lot of customers, this one is very popular, I still don't have a chance to taste it. Looks like I should spend more time eating in my own restaurant.” 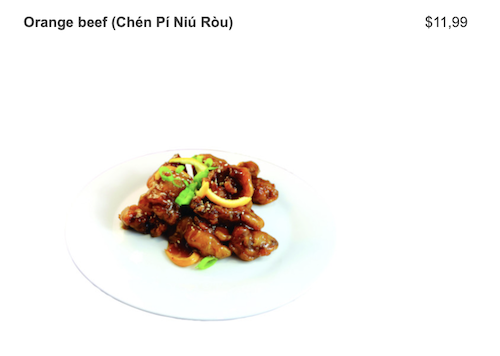 For Fei, his restaurant’s Orange Beef is one dish you wouldn’t order. “Comparing to our General Tao Chicken, this one is not THAT good,” he said. “Anyway, I am not big fan of North American Chinese food and it's your call.” 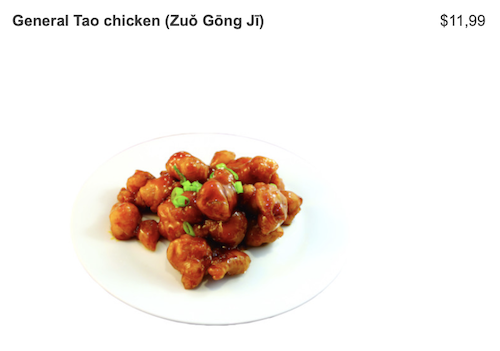 But the restaurateur surely prides himself on AuntDai’s General Tao Chicken. He said, “More than once, more than twice, our customers told me AuntDai has the best General Tao Chicken in Montreal. Hands half-way down or three quarters way down.”

“Maybe I am no expert on North American Chinese food but I like our General Tao a lot. A lot more than what I would have thought. We use high-quality chicken breast and our own special sauce.”

“I am really proud we have this great dish even though deep down, I hope all the items on our menu are authentic Chinese,” he added.

AuntDai rises to fame amid the pandemic

Fei used to be an IT engineer before he migrated to Canada 14 years ago. He launched the first branch of AuntDai in Cote-des-Neiges (CDN) Street, Montreal on Feb. 4, 2014, but a fire later destroyed it in October 2017.

Fei, however, was determined to make a comeback. Later that year, he opened another AuntDai branch in Anjou, a borough in Montreal. “It’s kind of funny, after a fire destroyed our restaurant at CDN, we opened a new restaurant right in front of a fire station. Hope this will give people peace of mind. Haha,” he wrote on the restaurant's blog.

In his interview with The Guardian, the Chinese immigrant said that he remains deeply aware of the challenges newcomers of the food industry face.

And for Fei, that includes the disappointment brought about by customers sending back uneaten food to their restaurant. “Some customers who hadn’t tried certain dishes were surprised by the level of spice or texture,” he said.

It then prompted him to write those food descriptions that are more straightforward.

By sheer luck, Kim Belair, co-owner and CEO of Sweet Baby Inc., was fascinated by Fei’s “extremely honest” menu and decided to share it to her 4,774 Twitter followers. “AuntDai is my favourite Chinese restaurant in Montreal, but the REAL treat is the menu, featuring extremely honest commentary from the owner,” she tweeted on Jan. 11 this year. 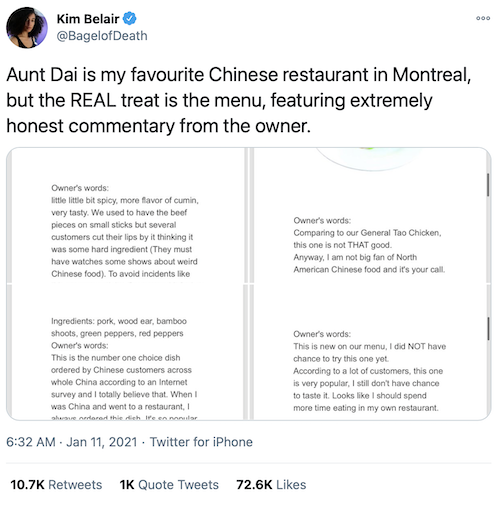 Fei went viral shortly afterward and his restaurant is now seeing a surge in customers. “Friday and Saturday, we saw a lot of new customers and a lot of them told me they heard me on the radio or saw me on TV, and they loved it,” he wrote on the restaurant’s blog.

Fei couldn’t be any more grateful, he even created a Twitter account to thank Belair for her tweet. “Hey, I am the owner of Cuisine AuntDai. Thanks to your tweet, I got a lot of press interviews. It has been a heck of few days in my whole life,” he tweeted Belair. “Joined Twitter to thank you. If you like, I want to talk to you…”

Fei continued to express his deep gratitude for Belair on AuntDai’s blog: “Kim called on Sunday morning, we had a great conversation for about 30 minutes. I thanked her a lot for making me kind of famous internationally after seeing media reports in so many languages.”

“Right now, it’s Sunday night, what a heck of week I just lived,” he concluded.

Justine is a marketer turned journalist who has worked for some of the big players in lifestyle media. She enjoys learning and writing about people and pop culture.

Large peach mango pie and more: Cap off May with these food news, offerings, and promos

Taiwanese invents stroller for fish to 'explore other worlds'