Have you ever wondered what it would be like to travel back in time to revisit an archipelago hidden away in the wide expanse of the Pacific ocean, with it’s lush green jungles, clear blue skies, and hidden mysteries?

Then come and visit The Islands of Sina Una to discover a new and fantastic world built from the legends, myths, and folktales of the Philippines.

The Islands of Sina Una is a new Campaign Setting that is compatible with Dungeons & Dragons 5th Edition that will give new and old players a chance to explore and get to know pre-colonial mythology and culture from the Philippines. 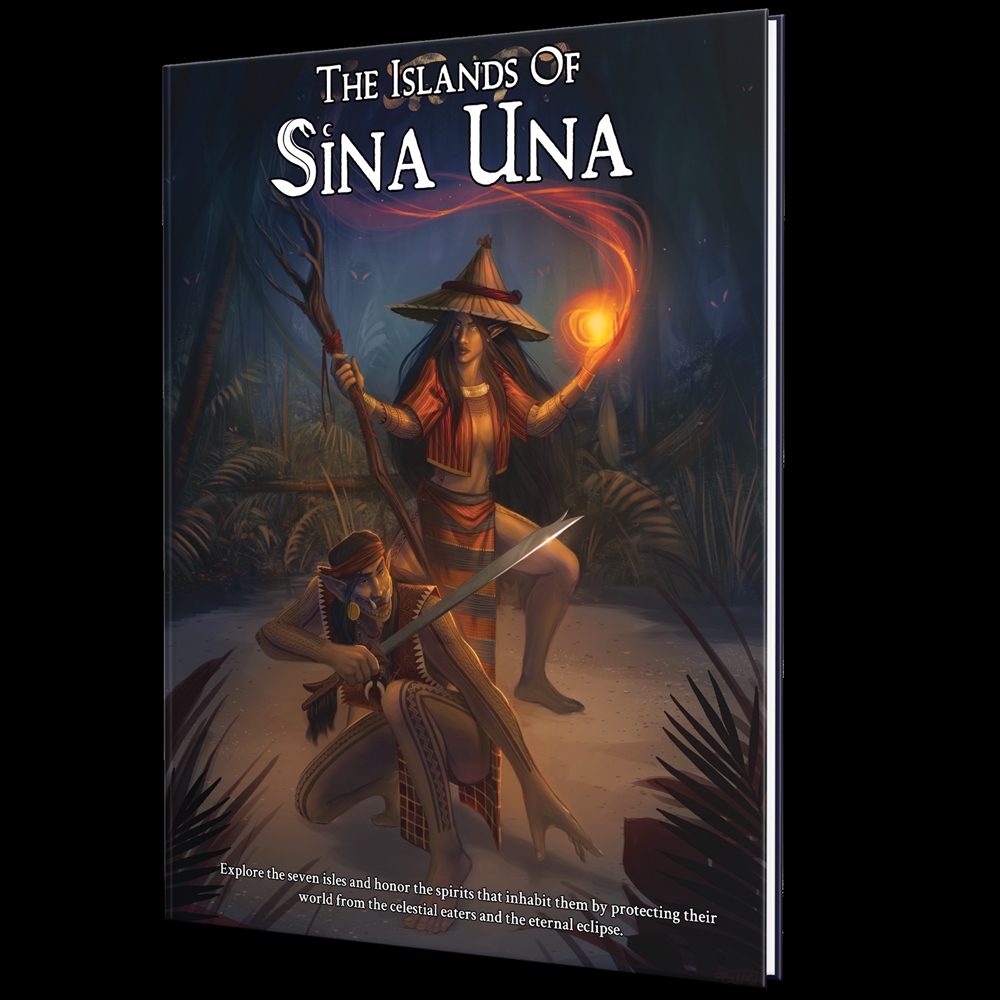 Players will be able to travel through seven islands, meet fearsome monsters like the Bakunawa, glimpse gods and goddesses like Haliya, and to meet the most important part of this world, the complex and diverse Filipino people as they were before they were “discovered” by their Western conquerors.

It is a labor of love by co-directors Lucia Versprille and Joshua Mendenhall with their excellent team of Filipino researchers, writers and artists that started in May 2019. It is still an ongoing project with the official PDF set to be released on or before September 2020, with the hardcover book following two months after that.

Joshua shared that Lucia was browsing through the internet one day when she stumbled upon a compendium of pre-colonial Filipino gods, goddesses and monsters that immediately caught her attention. She thought about how much fun it would be to use them for a D&D campaign, and to share the wonders and mysteries of lesser known Filipino mythology to the entire world. 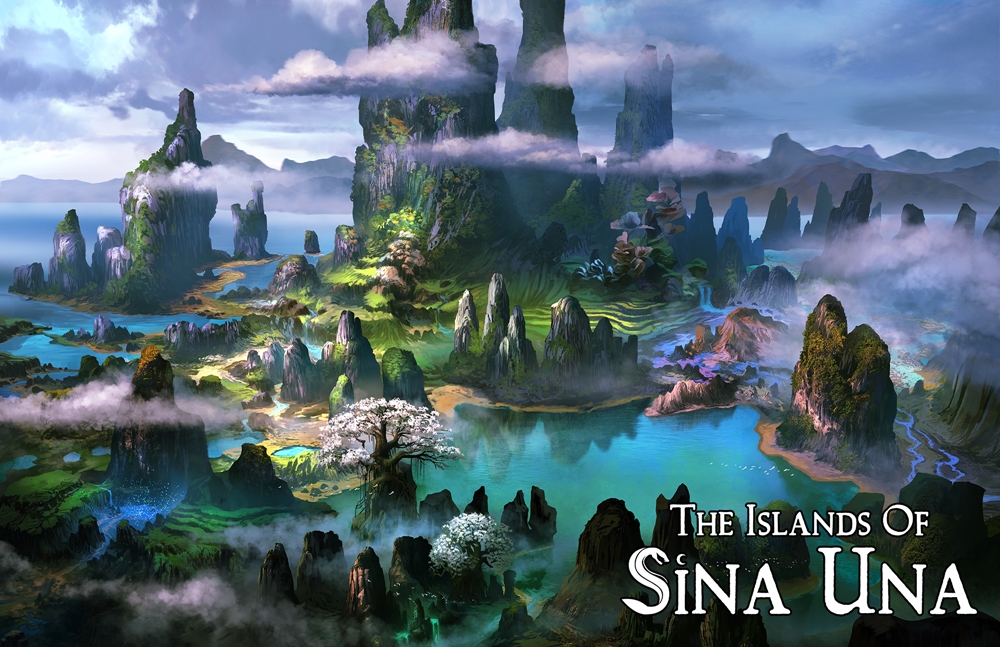 In Dungeons & Dragons, there are millions of worlds to choose from that you can play in. There are worlds inspired by favorite stories, games and myths but you don’t often see one inspired by Filipino mythology and it’s the first time to watch it unfold in an RPG setting.

Sina Una will bring new ways for D&D players to run or play in games that will give them new places to explore, new creatures, new myths, and become the missing link between real-life history and long-lost legends. 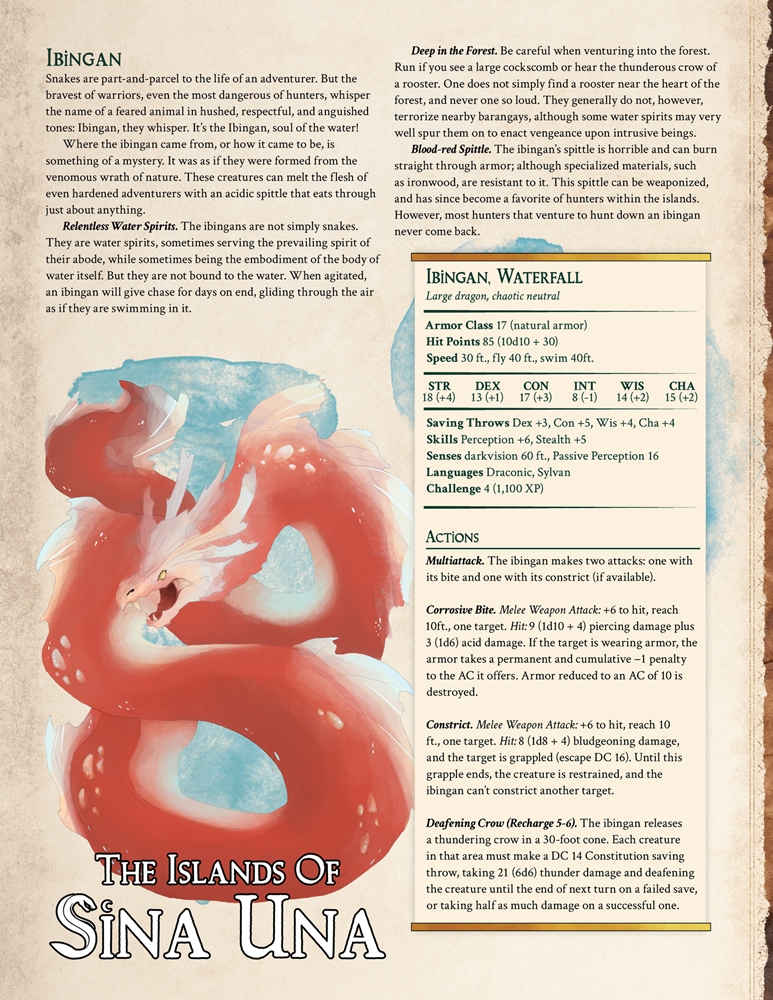 It has been largely inspired by three main factors. First, the creators wanted to introduce a new theme in tabletop gaming by representing the Filipino culture and mythology in a respectful and informed way, and expand the purpose of fantasy by providing more ideas in creating worlds and characters.

Second, they wanted Sina Una to be an easy way to access a large resource of information in pre-colonial Philippine mythology, with a master list for every sourcebook they referenced on the subject for TTRPG (tabletop role playing game) players. Any casual reader can also check out the book for its gorgeous art, well-researched characters, and background stories.

Finally, it provided the creators and their team a connection with their Filipino heritage, and to feel the comfort in playing a character in a journey of self-discovery. 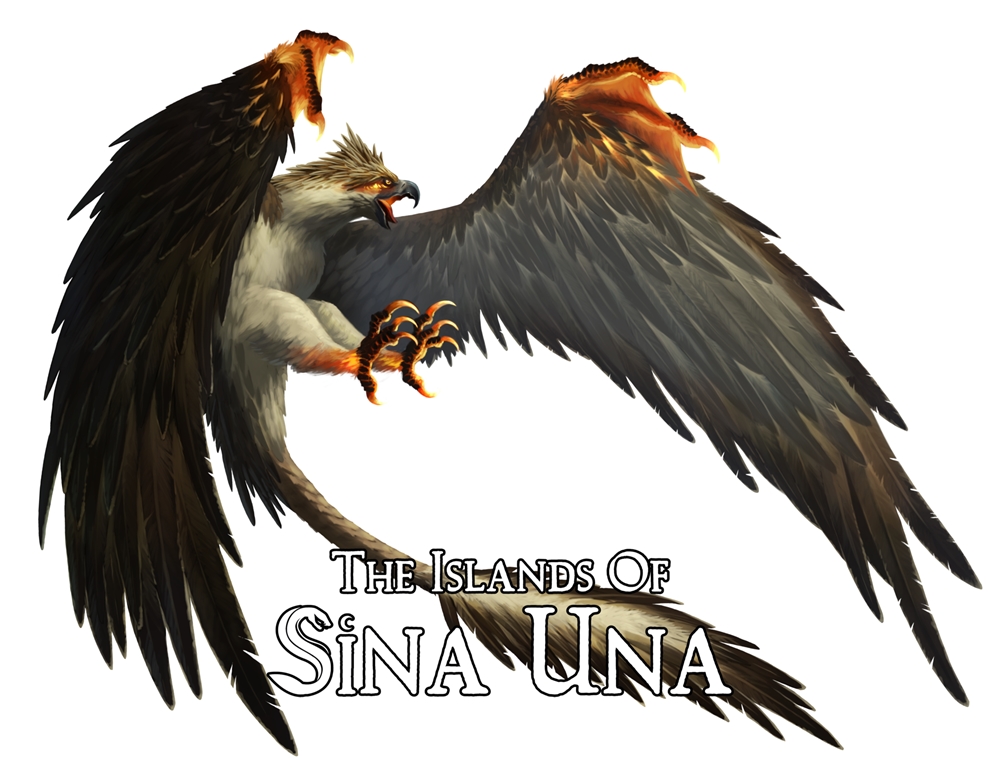 The creators realized early on that Filipino mythology was largely forgotten, but managed to survive via oral tradition before getting swept under the rug of colonization. Sina Una meant “those who came first.” It’s a fitting name for a homage meant to honor all of the indigenous people living in the 7,107 islands.

As Versprille explains, “I am also proudly Filipina, my heritage inspiring me to create the Islands of Sina Una, our 5E compatible sourcebook on pre-colonial Philippines book. I believe that by normalizing other cultures’ mythos, showcasing and blending it with classic fantasy, that we can start diversifying our gaming table.”

She decided to work on it and tapped Mendenhall to work on the art, the layouts and ads.

Mendenhall has always been playing D&D one way or another. His dad used to tell him stories of his own D&D campaigns instead of fairy tales until he started playing at age 10. Now, he focuses primarily on his role as the co-director and lead designer for Sina Una. 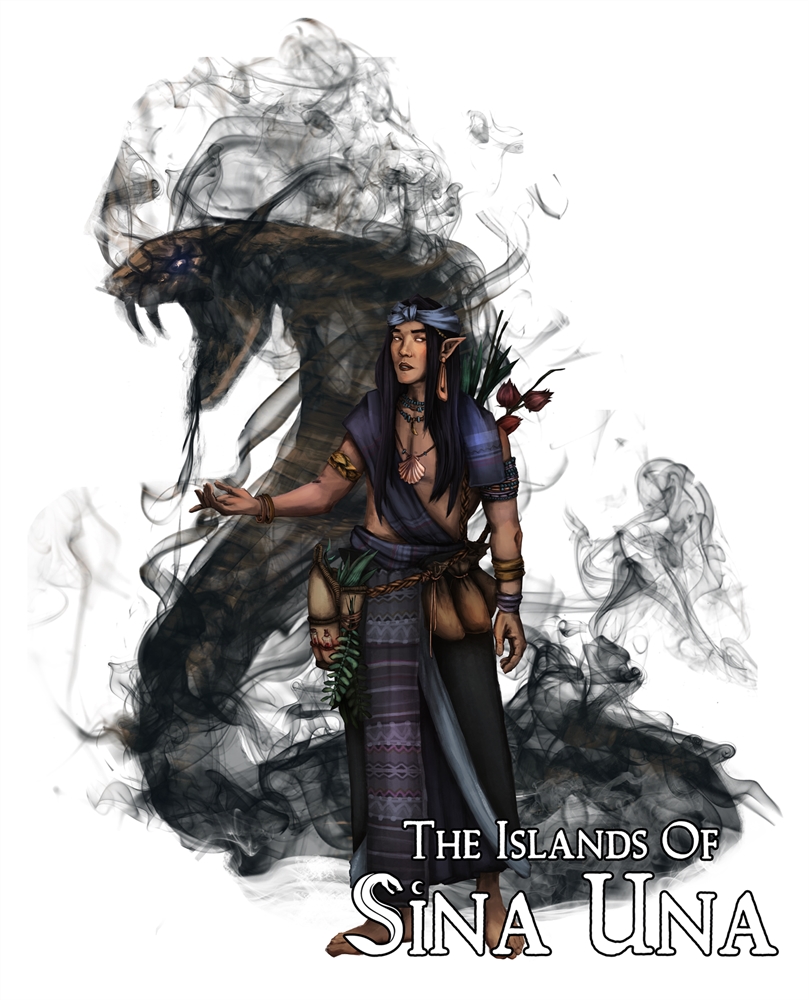 They assembled a team of passionate writers, researchers and artists of Filipino heritage to work on the project, filled with a burning need and determination to share their mythology and culture.

They went to work launching a massively successful Indiegogo crowdfunding campaign, where they were able to raise $42,558 with 725 backers.

The main funds went to paying the team for their time and effort researching the source material and weaving it into fantasy. The rest of the funding went to layout, book production and logistics costs.

Players will be able to choose from two new base classes between the brave Headhunter and the mysterious Babaylan.

They will also have the option to choose from 12 new subclasses ranging from the fearsome Barbarian, Oath of the Black River; the storytelling Bard, College of Siday; the holy Cleric, Volcano Domain;, the enigmatic Druid, Circle of Tides; the strong Fighter, Kawal; the dual-natured Monk, Way of Kaluluwa; the loyal Paladin, Oath of Blood; the adventurous Ranger, Mangangayaw; the stealthy Rogue, Graverobber; the powerful Sorcerer, Diwata Bloodline; the commanding Warlock, Moon Eater Patron; and the wise Wizard, Mentala.

Every one of my writers who works in this book have a bit of Filipino heritage. Working in this book is a way for them to actually connect with a piece of themselves.

Dungeon Masters will choose between massive monsters inspired by ancient fears called Celestial Eaters, such as the gigantic snake Bakunawa and the massive eagle Minokawa. As stated in the book, one of the main goals in the story is to prevent these Eldritch monsters from coming back and devouring the moon, triggering the end of the world.

Players can also look forward to battling aswangs, sigbins and other creatures of the night with their anting-anting (amulets), potions, charms made of bamboo, and other magical items.

It is important to note that everything in the book was well-researched, honest and truthful because the creators felt that the story should be told in this way. There’s a genuine interest from their audience in learning more about Filipino mythology. 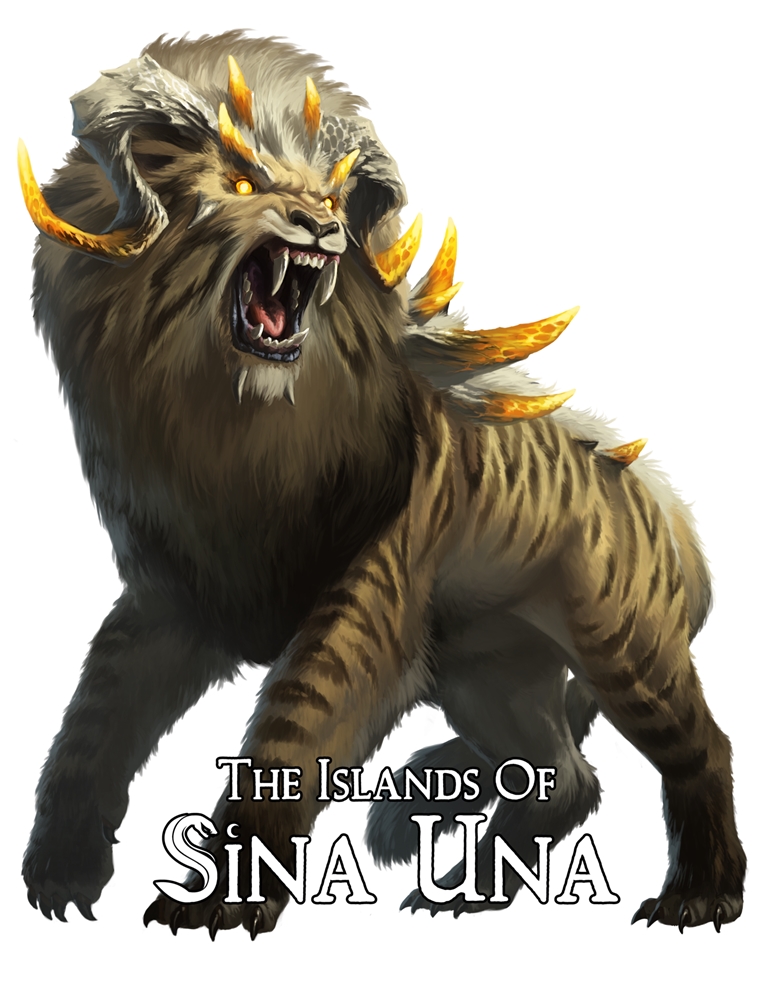 In an exclusive interview with Joshua, he shared a sincere and poignant message to fellow D&D players and fans of Sina Una:

“For any Filipino fans, I mean, when we started working on this book we started seeing a lot of things about ourselves that we didn’t really know about ahead of time. Every one of my writers who works in this book have a bit of Filipino heritage. Working in this book is a way for them to actually connect with a piece of themselves.

“I said this a while ago in a Twitter thread where I was talking about how I never saw myself as Filipino growing up and I did whatever I could to distance myself from being seen as Filipino because I didn’t understand it.”

“I couldn’t see a part of myself so I didn’t know who I really was. So, working on this book, making it and seeing it come to life has been a way for me to actually see what kind of person I really am. I hope that any Filipino person goes into this book and sees it… I hope they see… I hope it can be a way for them to see a part of themselves too.”

Noela Camille is an aspiring writer who likes to collect books, loves cats and likes anything geek-related. You can follow her blog at https://missseductivevenus.blogspot.com.