Seeing Devices live is a very rumbly experience. I’m not kidding — their more energetic songs (Conquistador, Keep Me in Mind) usually have the entire gig venue literally shaking with the stomping of eager, excited feet. On more languid, melancholic tracks (the enigmatic Fools, T.E.O.S.), the energy is transmitted differently.

Lead singer Austin Tan croons over his microphone as if it were the last thing tethering him to the stage he’s standing on. The mood sombers, blanketing the crowd as Austin sings the last line of T.E.O.S.

Drummer Enzo Alampay agrees with this observation: “If I were to describe our set, I would use the words ‘dynamic’ and ‘balanced.’ We showcase our different sounds and we usually try to spread out the energy of the set. We also usually put our focus on learning after a set, in terms of cohesiveness and fit. It’s the fun that comes with it.”

As a fan of both Devices’ live sets and their 2018 EP “The Element of Surprise” (“T.E.O.S.”), I was very excited to see how the band would evolve their sound with the recent announcement of a new single, especially after seeing their hilarious Parasite-inspired band photoshoot.

And they did — Tell Me, Is There Anyone (TMITA), their grand entrance into the so-far questionable new year, is a culmination of the band’s sound progression, a clear evolutionary arc from Flowers (a song that the band looks back at as a folly of their youth, but if you’re curious, you can still listen to this chapter of their life on Spotify), to the ominously-named TMITA and the new album.

I sat down with the band to talk about this arc, at possibly the worst time to do so. Amidst the biological scare, Austin (vocals and rhythm guitar), Arik Gatchalian (lead guitar), Andrea Ramos (synthesizer), Enzo (drums), Javi Serrano (bass), and Jacob Ferrer (main producer and synthesizer) still remain steadfast in their dedication towards making progress on the album.

“Our priority for now is keeping safe, we’ll see with all the hullabaloo going on,” says Austin.

Like many other budding musical projects, Devices was a band born out of college boredom. Arik puts it bluntly: ‘I asked [the other members of the band], do you want to join a band? They said yes, and the rest is history.’

Like many other budding musical projects, Devices was a band born out of college boredom. Arik puts it bluntly: “I asked [the other members of the band], do you want to join a band? They said yes, and the rest is history.”

Unlike the majority of college projects though, Devices did not end up as a barren group chat nor a mess of destroyed relationships. They ended up with actual goals to work towards.

“Wag lang sana baduy,” Austin jokes. “But really, at first we wanted to be this big and famous band, but now that we’re older that’s kind of not the direction we’re headed towards. My vision for the band to be [an inspiration] towards those starting out, towards other bands in the scene. Also, finish the album.

Arik: “This was supposed to be an electronic band.”

Arik again, but quieter this time: “It did not become an electronic band.”

2018’s “The Element of Surprise” signaled a change from Devices’ innocuous college-based beginnings. Conquistador and the title track became instant hits in their live sets, putting the local music scene on full notice.

Each member went through their “age of discovery,” as Austin puts it, while coming up with the EP.

“I went through shit,” Austin shares. “At the time I still lived in Q.C, so I’d often hang out with Jacob and Arik [and brainstorm].” On which songs came first in the EP: “Confusing, I already wrote Conquistador on our hiatus, but I let them hear T.E.O.S. first. It’s kind of like that Pokemon meme with Arceus, Rhydon, Mew, and Bulbasaur. But in the first place, I already had a sonic direction and vision for the EP, and I think it really showed.”

Andrea dealt with the matter systematically: “It was a long process. It took us a while to find a direction to pursue with our music. I think I can give a good example: when we started out, I had no idea how to incorporate synthesizers into our sound, especially since early on [pre-EP] we were doing stereotypical indie songs. Fools was when we began to understand all our roles and instruments in the context of the band [and it built from there.]”

Interestingly enough, with the release of Tell Me, Is There Anyone, and the foreboding album release, the band notes that the creative process has become quite different. Javi: “I feel that everyone in the band has their own musical prowess and it culminates into the songs we have today. We usually just gather in Enzo’s attic and build on really bare ideas.”

Andrea notes the more collaborative nature of their recent songwriting: “I think we’re at a point in our band-ship [Andrea’s term for familial love within a band] that we’re comfortable with telling each other what we like and don’t like.” Indeed, Tell Me, Is There Anyone is quite the sonic departure from previous singles such as Conquistador; it’s longer, darker, more distorted, and even more bombastic.

Austin’s lyricism is also a noticeable difference between releases; his lyrics in T.E.O.S center around the aforementioned “age of discovery,” the cyclical, youthful period of making mistakes and learning from them. Two years later, Tell Me, Is There Anyone deals with more existential matters, the times in your life when you just want to disintegrate and dissipate.

“At its core, [TMITA] is a turning point for me again. It’s very personal and honest, which I try to be nowadays, in comparison to the EP being more youthful and naive. Now that I’m a bit older and more cynical, I guess the song just paints a new truth.” It’s a fitting, natural progression, one that should perfectly complement T.E.O.S’s themes.

So what can we expect from the band moving forward this 2020? “More content revolving around the songs we’ll be coming out with. I don’t know, maybe a music video or something?” Javi winked at me as he said this. According to Arik though, there is one secret 2020 project the band’s willing to divulge: “TikTok.”

Get to know Devices in these handy training cards: 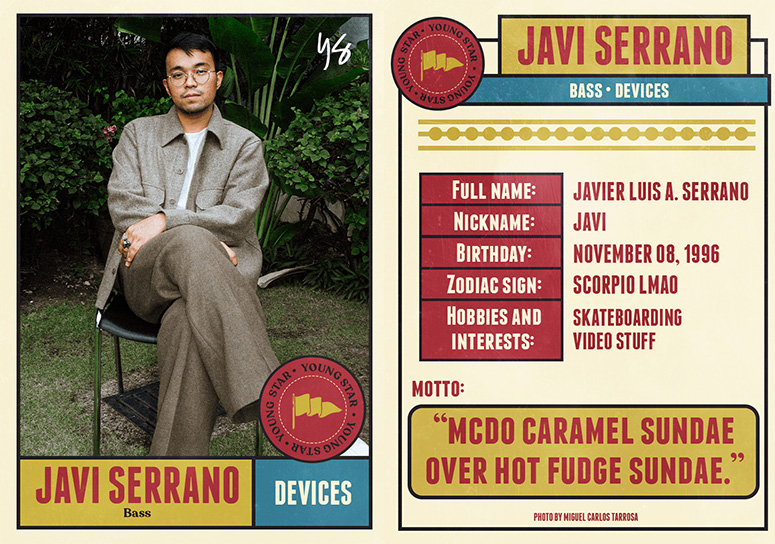 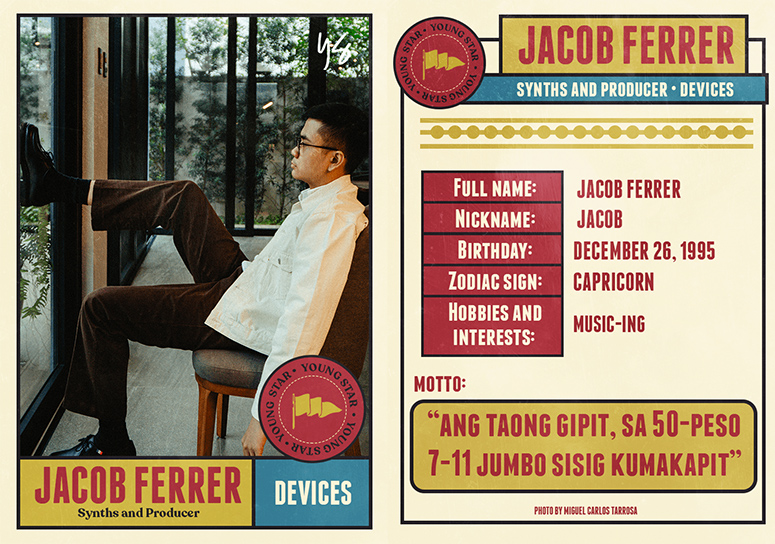 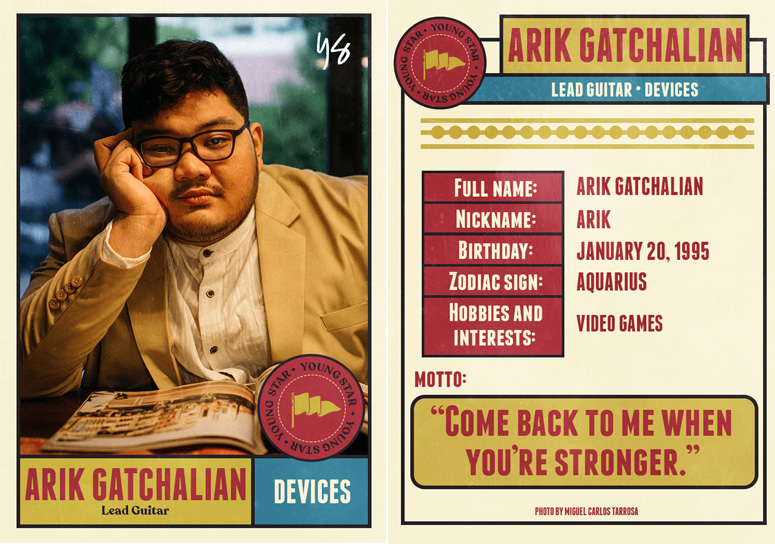 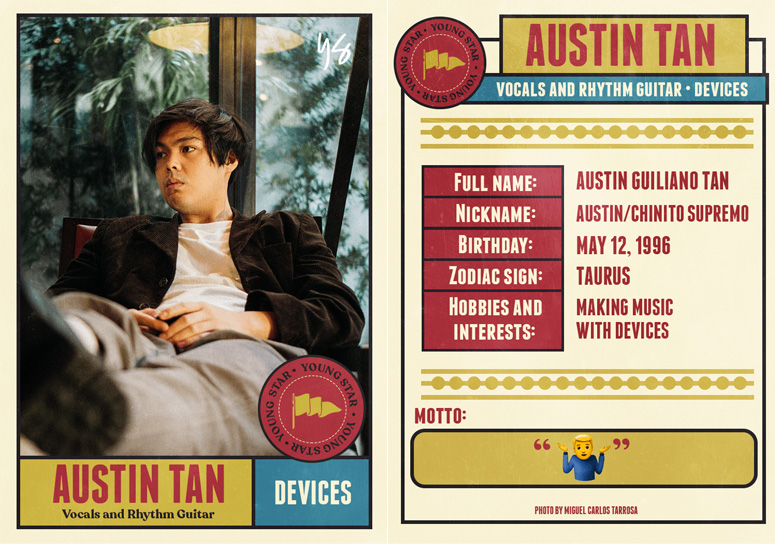 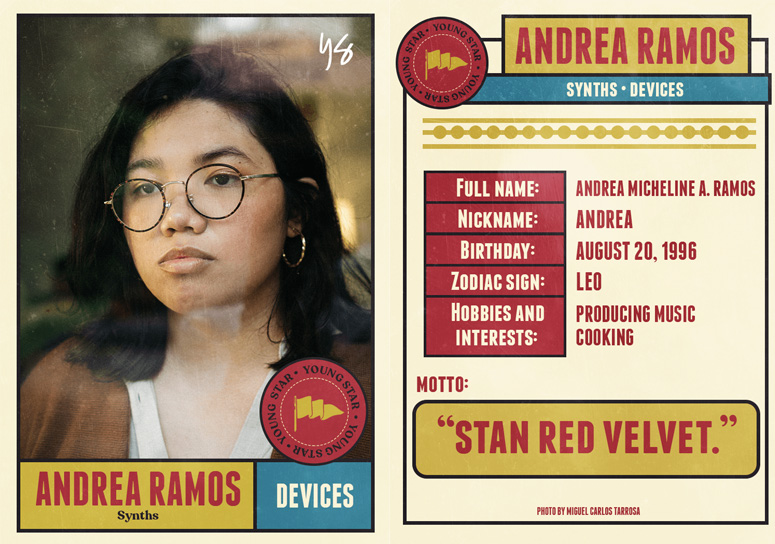 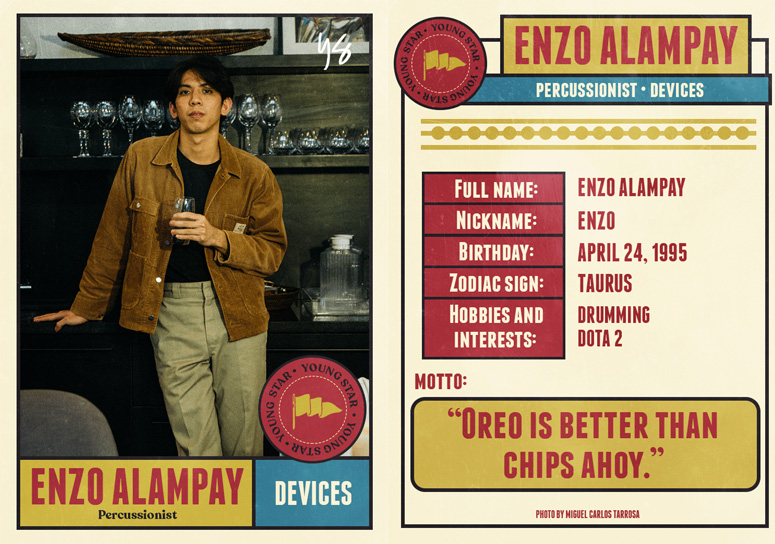