Hot off the presses are three poetry books that could start us off right for a hopeful new year.

The Sigh of a Hundred Leaves by Ma. Milagros T. Dumdum and Simeon Dumdum, Jr., published by San Anselmo Press, has the loving couple collaborating on the tanka form, with the lady supplying the first three lines as in a haiku, and the gentleman providing completion with the two final lines of seven syllables each. Thus, five lines with a total of 31 syllables.

Marvin Aceron, who heads San Anselmo Publications, Inc., says that they liked the collection of renga poetry “so much that they asked visual artist and art conservator Mariko Nakamura to design special bookmarks containing some poems from the book with her artwork.” 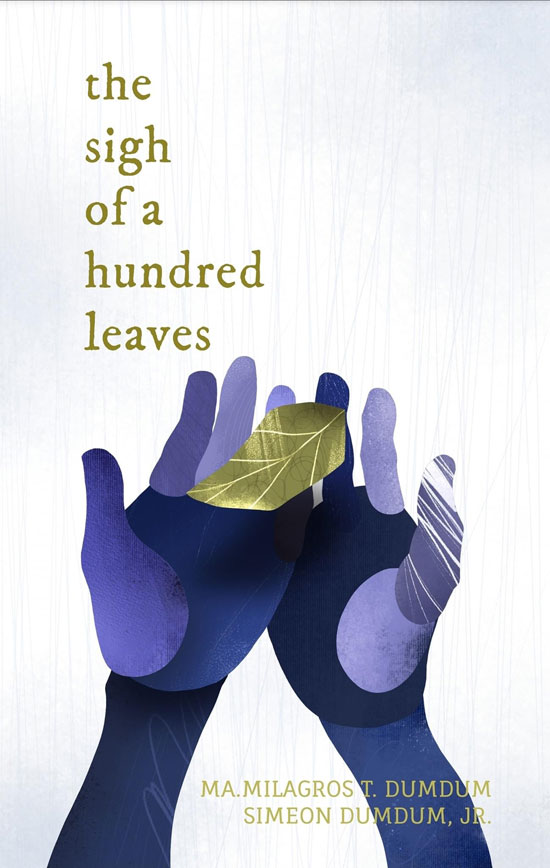 A copy with the special bookmarks, of 10 designs, sells for P510 plus shipping. San Anselmo Press may be reached on Facebook.

“In this work, the poets, spouses, wander as one mind through a world of beauty and impermanence, slipping in and out of both the exterior and interior landscapes, in accordance with a random map of images.

“The trip leads to such places as churches, rivers and gardens, through days and nights of rain, bonfires and clouds, and on paths scented by jasmine, chrysanthemum and other flowers.

“And how does the journey end? With steps leading to an open and welcoming door.”

I still think that renga means strictly linked verse, that is, linked in succession, as a chain of tanka might be. Having yet to hold the book, I’m not too sure if the hundred poems are indeed linked sequentially. So for now I’d call it tanka poetry, of which here’s sharing three deft samples.

“Above and below/ The breadth of earthly beauty/ I seek the true flower./ Beyond the ceiling and floor/ Of geraniums and daisies.”

“The black dog scampers/ Under the rain, a pink sash/ Fastened around it./ Will the weather untie it?/ Will I before it gets loose.”

“It’s always the sea./ Its irresistible flow/ A restless leaving./ That like me endlessly needs/ The stillness of a tide pool.”

Siwang sa Pinto ng Tabernakulo, published by Librong LIRA, is the third collection of poetry in Filipino by Louie Jon A. Sanchez, poet, critic, translator, and AdMU assistant professor in English. A member of Linangan sa Imahen, Retorika, at Anyo (LIRA), he was hailed as “Makata ng Taon” in 2006, 2009, and 2011 by Komisyon sa Wikang Filipino.

Also contributing to the Foreword is Rodrigo Dela Peña Jr., who writes that in this new collection, Sanchez “explores how faith is constructed and performed, illuminating the page with his lyric intensity. His meditative poems reveal not only the divine in the human, but more telling, the human in the divine: fallible, flawed, and thus all the more complex.”

Birdcatching in Sagada and Other Poems by Franklin Cimatu is published by UP Press as part of the Philippine Writers Series 2020 edited by Rolando B. Tolentino and Vladimeir B. Gonzales. The veteran journalist, NGO worker and “Baguio boy” has a remarkable number of terrific poems in this second poetry collection, with most having been written decades ago (as early as 1989).

From “Soul Capture”: “Bee wings sprouted and I landed on the ceiling./ My wife must know. I flew to her ear to whisper/ The name of my lover’s husband who did this. Reverse/ The incantation, I prayed, and slap me some other time.”

From “Golden Buddha Among the Confiscated Marijuana (Baguio City Regional Trial Court, 1994)”: “The First Lady/ Had me wheeled out/ And nicked my ear/ With a borrowed coin/ to show I was unreal./ I realized painfully/ I cannot touch/ Her ear back./ This is a child’s game/ She is winning.”

From “Burning Robert (For Robert Villanueva)”: “Should I happen to bump into the spinning you, hex me/ With sweet compassion. Mark it with a tiny fire salamander/ Hugging my chest to keep this heart from love-blasting.”

From “Bird Catching in Sagada”: “The old trapper on my left told me that timing is everything;/ Bring out the gas lamp too early and you scare the flock,/ Dispersing as they frantically seek other lights nearby,/ Too late and the birds ram the lamp or fly beyond reach./ As you get older, he continues, you pray for the mistiming./ For all you need of grace is the chaos of wings passing;/ The rush of love moving forward, taking nothing and everything.” 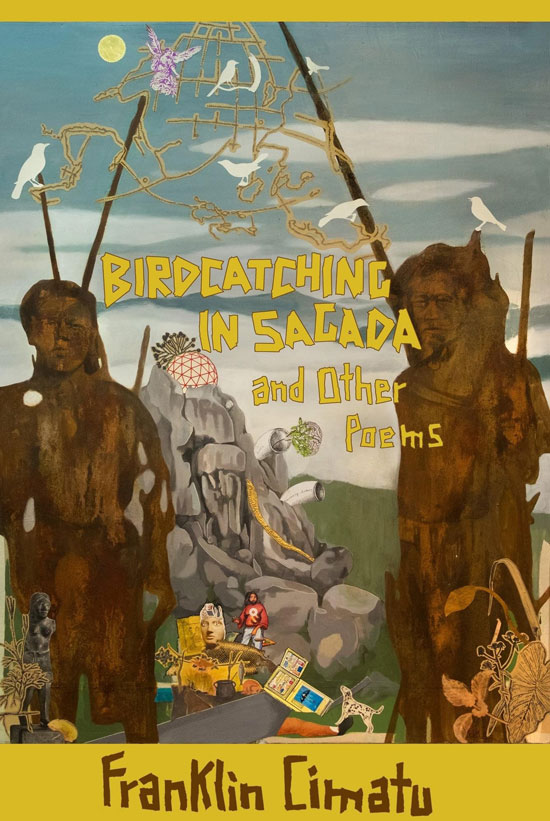 Anitos, Ifugao law, Session Road dogs, old movie theaters, Maningning Miclat and Marcos are referenced. One poem is titled “Painting Frida in the Nude (In memory of Santi Bose).” Another is “Presidential Sestina a.k.a. The Blind Date” — which is as elusive and elfin as all-get-out. Then there’s the prosody-shattering “Like Nijinsky in Fiji (dedicated to Rishab Tibon who provided the first line)”: “Broken mirror. A hundred little eyes/ Not the all-important ‘I’ but the ‘i’ of the young poet/ Who calls his poems ‘scribblings’ or ‘verses.’/ e.e.cummings comes to mind, like an incubus to the poet’s (10)/ Iniquity….”

There’s “The Evolution of the Bolo Punch” (“… It wasn’t a punch at all, my father said./ It was a magician’s move…”) and ”The Pacquiao Poems.” And arguably the strongest poem, “The Hunches: Imagining How It Was For The 32 Journalists The Night Before,” composed of terse, numbered prose statements, the last going: “32. He lent her his ballpen. But the ink has spilled outside its vein and both their hands were smudged by a stain more stubborn than blood.”