Every day, smartphones are barraged with a slew of notifications—such as texts, emails, social media pings, and more—coming at random times throughout the day. It can get overwhelming.

Sometimes, they even come in the middle of the night as you're getting some shut-eye, while you're driving, or trying to focus on work. And even if you put your phone on silent, your screen will continue to light up as notifications pop in. At times, it's like your phone is beckoning you to check if that was an important message.

Enter Do Not Disturb, a feature that silences notifications completely while keeping your screen dark (with some exceptions)—giving you that much-needed time away from your phone. When enabled, notifications are still going to come in but you're only going to see them when you pick up your phone. 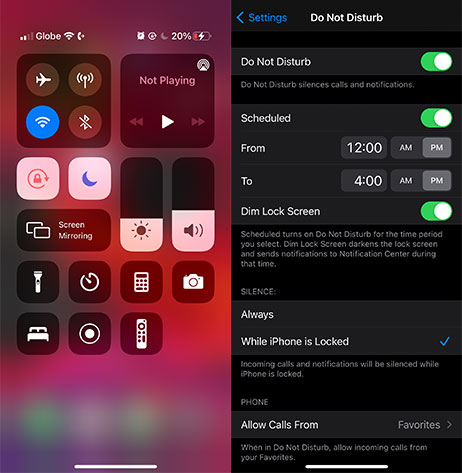 Currently, Android has a Focus mode, which functions just like DND but is more geared toward boosting your productivity, It minimizes distractions by allowing notifications from work apps to come through instead of silencing them. iPhone users will get them soon, too, when iOS 15 drops.

Hold off splurging on the iPhone 12! Here are 5 reasons why you should wait for the iPhone 13

From 'Alam mo yan Marina' to Tampalpuke: The most iconic moments from 'Drag Race Philippines'

HoYoFest 2022: Celebrate 'Genshin Impact' with themed food and merch at this Manila café