A huge update has just arrived for Call of Duty: Modern Warfare and Warzone, bringing with it tons of new content, from weapons, maps, modes and operators. There will also be a new global event where each country’s Tier One Operators can battle with other teams in Olympic-style matches.

The latest update from Call of Duty — Season 5: Reloaded — brings lots of new things to the game. First up is the FiNN LMG, a lightweight, fully automatic weapon that punches well above its weight against many of the existing LMGs. This new LMG can be earned either by completing an in-game challenge or acquiring a blueprint variant by purchasing the “Mainframe” bundle.

The new King Slayer game mode is also up and running. It’s a large-scale Team Deathmatch or Battle Royale where teams fight to earn points by defeating opposing players. However, the circle doesn’t collapse, rather it moves around the map for agile battles. The top-scoring player will be marked as a ‘king’ on the Tac-Map. Eliminating ‘kings’ will earn you additional points, or free Killstreak.

There’s also a new Gunfight Mode coming to Warzone, where players battle it out on a remodeled version of the Verdansk Stadium. For Modern Warfare, the new Ground War Reinforce mode will have players capturing three flags. A bit of caution though, if you die attempting to capture a flag, you won't be reincarnated until your team successfully captures one of the flags.

Meanwhile, Gunfight Tournament will be a head-to-head test of gunskill, map knowledge, and coordination in a tournament format. Winners will be rewarded with XP, high tier cosmetic rewards, and bragging rights as victors. All players can join in the tournament during the Free Access Weekend from Aug. 28 to Sept. 2.

The lineup of Operators is also expanded with the addition of Sergio ‘Morte’ Sulla, a skilled Italian tracker who served with the legendary Col Moschin paratrooper regiment in Italy. The newest recruit found in his own Store Bundle arriving later this Season. 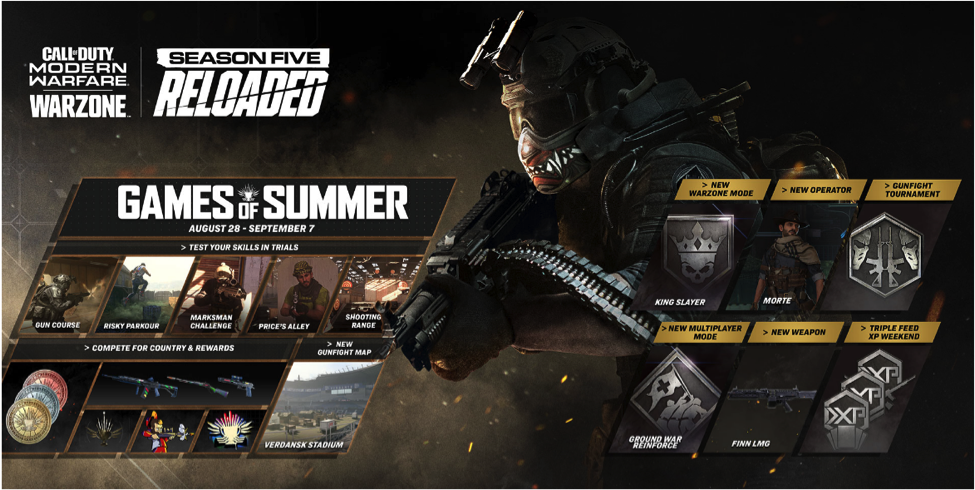 Yet the biggest announcement of them all is Games of Summer, an 11-day global event where community members from around the world — both those who own Modern Warfare and free-to-play Warzone — will be able to represent their country in easy-to-play, hard-to-master, single-player skill trials. Games of Summer runs from Aug. 28 to Sept. 7. Trial schedules will be as follows:

In terms of content, Season 5: Reloaded looks to be one of the biggest seen yet, more than enough to keep Call of Duty operators occupied until Black Ops Cold War arrives Nov. 13.

(Images from Call of Duty)