Netflix tweeted out an image of the cover page and script for their Resident Evil live-action series, confirming news stretching back to 2019 about the production.

The tweet was posted on Netflix's geek-centered account, @NXOnNetflix (who is dating the moon, apparently?), and has gotten around 1,400 likes and comments in the first 15 minutes since it went up. 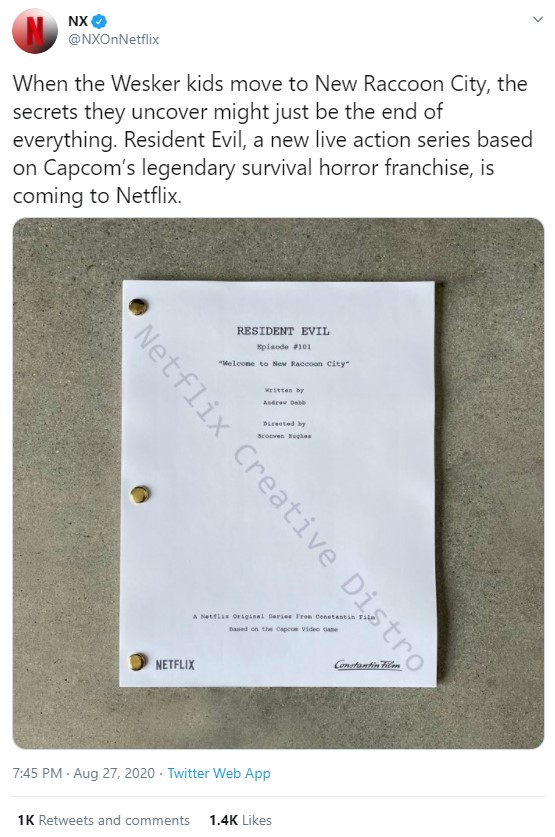 The image contains a script with the title "Resident Evil" on its cover page. Below the title it says "Episode #101" followed by the episode's title, "Welcome to New Raccoon City."

More information reveals the episode is written by Andrew Dabb, who is also a co-executive producer and writer for TV's Supernatural. Bronwen Hughes of The Walking Dead is the listed director.

According to an Entertainment Weekly report, Dabb will also serve as showrunner for the series.

The Resident Evil live-action series on Netflix is being described as a brand new story, unrelated to the video games and movies before it, spread across two different timelines. The first timeline will involve 14-year old sisters Jade and Billie Wesker as they move to New Raccoon City, a place that doesn't seem quite right. Fans of the video game or movie series may recognize the "Wesker" name but it is yet to be revealed if this is in reference to Albert Wesker, one of the more notorious characters of the game.

Meanwhile, the second timeline is over a decade into the future, and there are less than 15 million people left alive on Earth having to contend with more than six billion monsters transformed by the T-Virus. Jade, now all grown up, tries to survive in this world while struggling with secrets from her past.

No premiere date has been set for the series.