Back in the '80s  where "cyberpunk," a science fiction genre set in a high-tech, dystopian future was at its initial popularity, fans of the genre had hoped that the 21st century will be the era where the state of society and technology will be the same as portrayed from hit sci-fi movies during that time such as Blade Runner or Ghost in the Shell.

Three decades later and everything is not what fans of the genre expected the future to be. The world may be pretty much the same as 1999 (but with smartphones), but the hype for cyber-dystopian futures is still alive and well in mainstream media.

What sits at the top of this collective fixation for this particular genre since 2013 up until now is Cyberpunk 2077, an upcoming open-world, action-adventure role-playing game (RPG) that is considered by many as the next big thing in next-generation gaming. Here’s why.

Cyberpunk 2077 is developed by none other than CD Projekt Red

Known as the masterminds behind The Witcher fantasy-action RPG series, Poland-based developers CD Projekt Red (CDPR) is the largest game company in Europe, and by far the most respected developers in the industry.

They are known for their dedication to creating intricately woven narratives and massively detailed open worlds. A prime example of this is their work on The Witcher 3, which received critical acclaim and is a recipient of over 800 awards, due to its gameplay, narrative, world design, combat, and visuals.

Aside from their painstaking work as RPG developers. What made them so beloved by the gaming community is that they are very consumer-friendly, releasing all 16 downloadable content (DLCs) of The Witcher 3 to be downloaded for free.

Now treading the grounds of the popular cyberpunk genre with their unique formula in creating RPGs and their good reputation with gamers worldwide, it’s no wonder why all eyes are set at them and their upcoming AAA title. 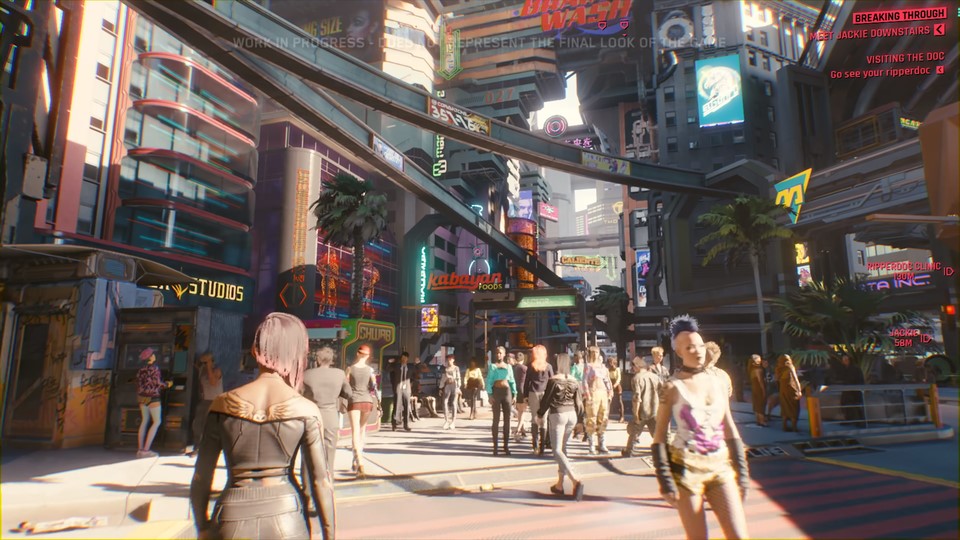 Cyberpunk 2077 is set in Night City, a bustling megalopolis located on the coast of the Free State of North California. A dystopian city where violence and oppression are the norm.

As seen from the official 48-minute gameplay demo, Night City is described as a “seamless open world with no loading screens.” Another stellar feature of Cyberpunk 2077’s open world is the enhanced crowd and community systems. No person in Night City shares the same character model and all of them are living their lives with a full day and night cycle.

“Night City is enormous. But we also value quality over quantity, I have to be honest about that. There's a lot to explore, but we would never just make all these half-empty buildings. We make sure that wherever you go, you actually get this high quality of exploration. We really try to make sure that around almost every corner there's something interesting,” says lead quest designer Pawel Sasko on his interview with Eurogamer.

Players can also leave the megalopolis and explore other locations like the Badlands, the wasteland plains a la Mad Max outside Night City where trouble and opportunities await.

Players can roam around using cars and motorcycles.  Both are driveable from first and third-person perspectives. There are flying cars, boats, and helicopters too, but are inaccessible for driving.

Based on the original tabletop RPG (like Dungeons & Dragons) from the late '80s, Cyberpunk 2077 equips the same elements as its predecessor with the complete agency the player has with the game’s protagonist, V.

"In Cyberpunk 2020, from 1990, in this pen-and-paper RPG – back then, when you created a character, you actually had this freedom as well, and it was part of a system. We thought that we would do it a disservice if we wouldn’t offer just as much freedom to basically inhabit the kind of character that you want to be, and give you freedom," says Philipp Weber, senior quest designer on Cyberpunk 2077.

Players can fully customize V from their sex,  appearance, cybernetics, and the freedom to choose their preferred classes: Netrunner (hacker), Techie (engineer), Solo (mercenary), or be a jack of all trades and combine them all.

Another feature to customize V to further immerse the player in Cyberpunk 2077’s world is choosing one of the three available lifepaths – character backstories determining V’s status in society that will serve as the player’s starting point.

There are three lifepaths to choose from: Nomad, Street Kid, and Corpo 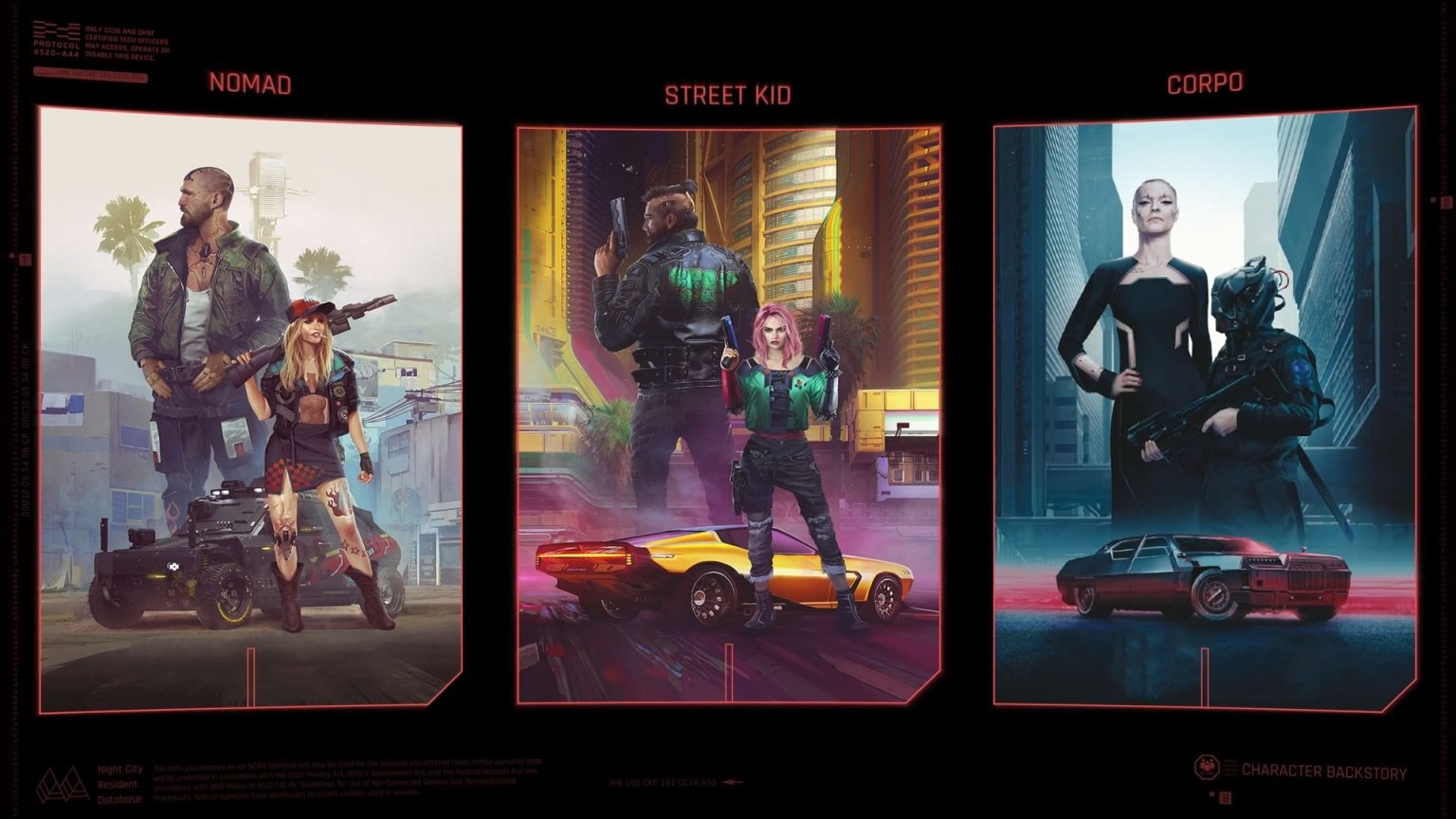 The popular lifepath in the Twitter poll made by CDPR is the Street Kid. This lifepath kickstarts V’s story as a lowlife gangster living in the city, constantly on the run from the law as they’re looking for their next big break in the underworld.

Next on the popularity lifepath list is the Nomad. Here, V is born from a tight-knit, freedom-loving desert community on the Badlands, away from the bustling city. But after an unforeseen conflict with his desert family, V becomes an outcast and sets out for Night City.

Last but not the least, is the Corpo lifepath. Unlike the previous two lifepaths where V is surrounded by allies, choosing Corpo means living only for yourself. The road is filled with lies and deception, and V has to keep up with the struggle in order to stay on top of Arasaka, the megacorporation that they are a part of.

As for how the character progression will work, players can improve V’s stats (Strength, Constitution, Intelligence, Reflexes, Tech, and Cool) by leveling up or installing cyberware.

According to Kyle Rowley of CDPR, there will be no level scaling in the game.

As for the EXP,  the game gives two forms of experience: Core XP for completing the main questline and Street Cred for the sidequests. Having a higher Street Cred is also the key to unlock new content and many more side quests.

With the multiple choices that Cyberpunk 2077 has to offer, players are sure to replay the game to experience each different playthrough.

Giving spice to the gameplay is the combat system. Cyberpunk 2077 features melee, stealth, and shooter combat that the player can utilize based on their playstyle.  As for V’s weaponry, CDPR just released a YouTube video introducing the different types of deadly weapons that the player can equip.

Each weapon type is unique and different from each other. "Cyberware" are body attachment weapons that can be utilized for melee (Mantis Blades, Gorilla Arms) or ranged (Projectile Launch System). "Power Weapons" can ricochet bullets, "Smart Weapons" with homing bullets that can hit moving or hiding enemies, and "Tech Weapons" that use electromagnetic energy which is powerful enough to break or shoot through barriers.

Players can also mod their weapons – from scopes, silencers, up to software mods which improves fire rate, damage type, and damage output.

What feeds the hype more for Cyberpunk 2077 is the appearance of well-known real-world personalities in the game. The most popular being "John Wick" himself, Keanu Reeves, who plays as the legendary rockstar Johnny Silverhand in the game.  Who would ever forget his shocking E3 reveal back in 2019 and the “breathtaking” memes it spawned afterward?

Another awaited appearance in the game is the hit electropop singer Grimes, mother of X Æ A-12 and girlfriend of SpaceX CEO Elon Musk. She will be voicing Lizzy Wizzy, a cyborg popstar who’s a big hit in Night City. Grimes was also present in last year’s The Game Awards where she performed her single “4ÆM” live.

After its long, seven-year development and pushed back release dates for the devs to rid the game of bugs and balance game mechanics, CDPR co-founder Marcin Iwiński and head of studio Adam Badowski announced in a developer update that Cyberpunk 2077 will be launched on Nov. 19, 2020.

“A huge world means a huge number of things to iron out and we will spend the additional time doing exactly that.” They said.

Cyberpunk 2077 will be available on. PS4, Google Stadia, Xbox One, and PC.  The game will also be ported to next-gen consoles such as the Xbox Series X and PS5. Players can pre-order now on their official website.