A new chapter of the Dark Knight is rising from the most unlikely place—Japan.

DC Comics Japan has teamed up with Tokyo-based publishing company Kodansha Comics to create two new manga series based around the Batman and the Joker. 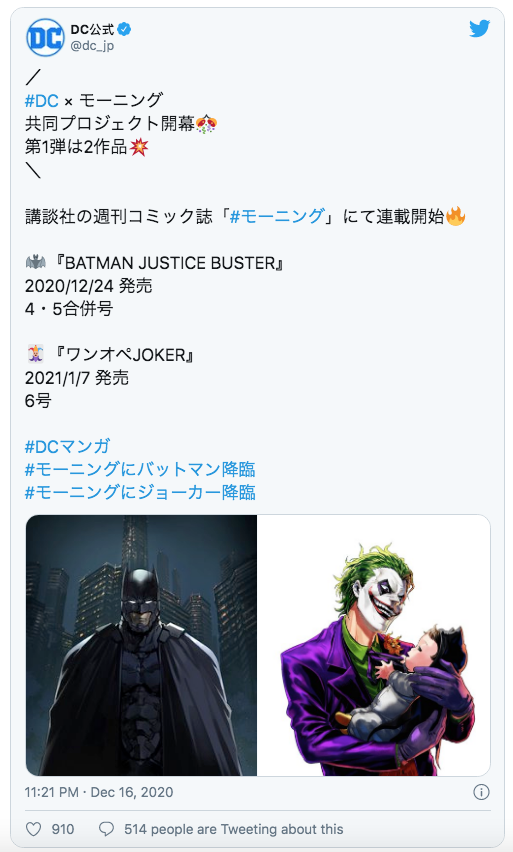 For Batman, the new manga will be named Batman Justice Buster. It will be created by Tomohiro Shimoguchi and Eiichi Shimizu, the artists behind works such as Ultraman and Linebarrels of Iron.

Batman Justice Buster will make its debut in Kodansha’s Morning magazine on December 24, during the combined fourth and fifth 2021 issue.

The Joker, the “Clown Prince of Crime” will be getting a new Wanope Joker (Joker: The One-Man Operation) series under Satoshi Miyakawa, writer of the Space Battleship Tiramisu series. For visuals, the illustrations will be handled by mangaka Keisuke Gotō. This title will be launched after Batman Justice Buster, in the magazine’s sixth 2021 issue slated for Jan. 7. It will also be featured on Kodansha’s Comic Days website.

This is not the Dark Knight's first foray into the world of Japanese manga. In 2018, Monthly Hero magazine launched a manga adaptation of DC's original anime film Batman Ninja by Masato Hisa. This Batman Ninja manga ran until September 2019. The manga was such a success that it took home a Seiun Award for Best Comic last August.

As for the plot of the new Batman/Joker manga, both DC and Kodansha remain mum.

It’s safe to assume that at this point, all fans can do is watch out for the launch of Batman Justice Buster on Dec. 24, followed by Wanope Joker on Jan. 7, 2021.