Born in Manila, raised and educated in Vancouver, honed with further education and professional training as an art scholar, writer and editor for much of the past decade in London, while barely in her 30s, Alex Quicho soars to undeniable brilliance with her first book, Small Gods: Perspectives on the Drone.

Fittingly held “in the virtual realm,” with “disembodied readings and portals into alternate dimensions,” it included video screenings by some of the international avant-garde artists that inhabit her book’s 10 chapters.

While copies are now available via Amazon and on Bookshop (US/UK) and Indiebound (US/Canada), it’s a pity that hard copies will take some time to become locally available. The title may also provoke intrigue as to its proper classification — with the following options offered: “Aeronautics & Astronautics. Aesthetics. Military Science.”

But what has been described as “a book on fear, transcendence, and drones in contemporary art” has already gained advance plaudits.

Alex Quicho is a fiercely talented young writer who nestles unexpected insights into a well-researched study of contemporary art’s engagement with drones, and of the drones’ reconfiguration of subjectivity and global systems. 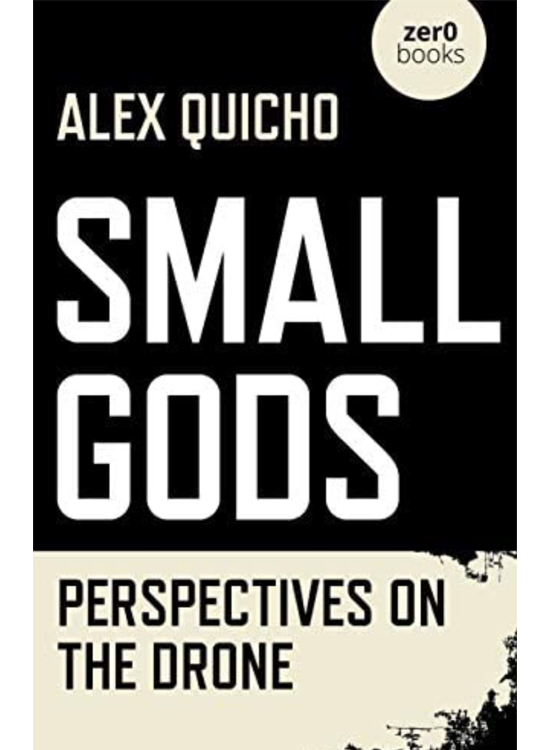 Vincent Bevins, author of The Jarkarta Method, weighs in: “Surprising, delightful, engrossing, disturbing, and ultimately inspiring, Small Gods is a thoughtful and urgent meditation on the ways that life is being re-constituted by technology.

Alex Quicho is a fiercely talented young writer who nestles unexpected insights into a well-researched study of contemporary art’s engagement with drones, and of the drones’ reconfiguration of subjectivity and global systems.

Relying on extensive interviews and fieldwork, she combines the affective poetry of art writing with the cold clarity of geopolitical analysis, and rightfully places these powerful new entities in the long history of a world forged through empire. As a result, Small Gods is revelatory.”

As a tito who has known Alex since she was a child, I’ve followed her progress through her BFA in Visual Arts at Emily Carr University of Art + Design in Vancouver, thence the Royal College of Art in London where she earned an MA Critical Writing in Art & Design. While I’ve been amazed at the quality of her written work published in London’s art magazines, it was with bated breath that I waited for a PDF copy of Small Gods.

Now I can say I’m proud and gleeful to revel in the extraordinary cognition, excellent articulation and mesmerizing leaps of insight as facets of a book that is both a delight and a terror to read. Some excerpts:

“The military drone entered public consciousness alongside a broader, existential negotiation that took place over the growing role of technology in our day-to-day existence. We absorbed the violence of its particular context, dropping it into an already potent cocktail of collective fear bubbling just below the slick, celebratory surface of technological innovation.

“… Just as the introduction of the Portapak camcorder in 1967 enabled artists to make movies cheaply without the help of a crew, blowing previous limitations of the filmic medium apart, the DJI Phantom opened up the skies to common use. The aerial perspective was no longer restricted to government, military, and commercial interests, inspiring a fresh coterie of artists to use the consumer drone to explore what it means to see and be seen from above.”

Shimmering acuity informs her prose, as it does the cogent narrative structure. Just as scintillating is how the reader is fed peripheries of image-making, worldbuilding, and indeed, epiphany.

“… Over the past five years, the consumer drone’s sky-borne form has become stunningly mundane. It tails extreme-sports athletes, makes deliveries, and allows for a genre of selfie that, thankfully, emphasizes its subject’s insignificance. It’s orchestrated into ornamental swarms that bear colored lights skywards, and is integrated into every pop video requiring a grandiose mansion shot. One would think that the drone, dispersed into a carnival of consumer uses, has tamed its history of violence.”

Bombers and fighter jets changed war forever, turning the sky into a theatre of terror and re-situating humans as helpless prey. Today the military drone can soar high enough to observe its target undetected, then flash down close for a quick, clean strike.

“The word ‘drone’ yawns back to the sixteenth century, when it described both the male worker-bee and the onomatopoeic buzz of its ennui. The ‘deep, continuous humming sound’ is first organic, rather than mechanical: it would go on to refer to the involuntary, throaty thrum of grief. The drone is linked to the dirge, the twelfth-century Latin mourning song, and comparable to a threnody, the seventeenth-century lamentation that scores a visit from Thanatos, Greek god of death.

“… The ouroboric roundedness of droning sound contains the quantum ‘ohm’ and ‘om’ of nirvana. Drone music, or ambient-drone, is a minimalist music genre that originated in the psychedelic Asiaphilia of 1960s West Coast America, though drone tones are global and ancient, found in the Georgian chant and Japanese gagaku performance. In terms of musical composition, a drone consists of a sustained or repeated note …”

She cites Yves Klein’s Monotone-Silence Symphony in 1949, “its first movement a drone, its second silence.” Then there’s the 2013 Rock the Garden festival at Minneapolis’ Walker Art Centre, with “the band Low … extending their 14-minute opus ‘Do You Know How to Waltz?’ into a heavy buzzkill … That year, public scrutiny of the US drone program was peaking. Americans grappled with the cognitive dissonance of how it was that the Obama administration, synonymous with liberal decency, could also be responsible for a sophisticated program of extrajudicial killing.”

Quicho adroitly paints a vivid tapestry of drone strikes as an evolution of “technology’s accuracy” vis-à-vis investigations conducted on these strikes by Forensic Architecture, a collective of human rights advocates whose “work aims to counteract the state-enforced systems of invisibility.”

She harks back to falconry, when in the 13th century it became “no longer an exercise of entwined intelligences (but) one of training and domination.

“Humans have long coveted the freewheeling freedom of birds; the falcon’s speed and striking power also linked flight and violence in our imagination, emphasizing the predatory advantages of an aerial view. Bombers and fighter jets changed war forever, turning the sky into a theatre of terror and re-situating humans as helpless prey. Today the military drone can soar high enough to observe its target undetected, then flash down close for a quick, clean strike. Engineers are still looking to feathered creatures to fine-tune aerial developments.”

From the East, Korakrit Arunanondchai, Stephanie Comilang and Alex Riviera, Lawrence Lek, Ian Cheng and WangShui — of Bangkok, Bohol via Hong Kong, Singapore and Malaysia, China that is not China — individually serving up a diverse panoply of once-and-future orientalia that ventures into exciting guises for AI, as much as rigorous personal surveillance of spirit worlds.

“With the ability to move oneself outside of oneself, the drone shapeshifts from an object that delivers death to one that holds it at bay. In the works of Arunanondchai, Comilang, Lek, and WangShui, it allows vision and consciousness to roam far beyond our physical bodies — these containers that are weathered by colonialism, racism, exclusion, discrimination, or, simply, the burden of representation. Empty metal becomes a vessel for escape, connection, or intention; a future-facing spirit, a ride into the afterlife, a ghost.”