Leave it to La Prairie to spend this lockdown period, when we’re all reflecting on time, to contemplate eternity. The Swiss cosmetics brand, founded in 1931 by Dr. Paul Niehans, continues its “Platinum Moment” art collaboration between composer Max Richter and Japanese artist Nobuhiro Nakanishi (they worked together previously on a sculpture/music installation called “Echo of Time”) with a new nine-minute film titled “Eternal Circle.” It was to premiere at Art Basel 2020 in Miami Beach, until the physical event was cancelled (due to coronavirus), and the video migrated online.

It’s a meditative, ambitious work that involved sending Nakanishi to the Swiss Alps, camera in hand, to take in the majestic peaks and later use those images to sketch a vertical scroll in the centuries-old Japanese “striped drawing” style. (Richter was more comfortably ensconced in George Martin’s AIR Studios in London, recording his score with an orchestra.)

It’s not merely an art gesture, of course: it’s meant to promote La Prairie’s Platinum Rare Haute Rejuvenation system. The two parts by Richter and Nakanishi come together in a meditation on the fundamental properties of time suspended — and this, La Prairie says, is the essence of its reimagined Platinum Rare Collection.

Ever since Dr. Niehans started innovating with “cellular therapy” in 1931, the company has embarked on a quest to halt aging. Its latest beauty system claims to “breach the skin’s barrier” and “reanimate” cells, thereby “creating new skin tissue” to stop aging. The Zoom session that brought together Richter and Nakanishi with La Prairie global chief marketing officer Greg Prodromides highlighted the packaging itself: a two-part dispensing system that Prodromides calls “an object of desire” displaying the brand’s “unique savoir faire (know-how).”

At the webinar, Nakanishi explained how the experience of physically tromping across the frozen Alps brought him closer to nature — its feel, the crunch of snow and earth under his feet, the whipping winds — and a sense of time’s expansion.

Born in Fukuoka, Nakanishi’s work departs from traditional sculpture making — using wood, stone, clay or metal to represent three-dimensional objects — to deal with antithetical ideas of existence and absence, the material and the non-material, the visible and the invisible generated in space, the visually imperceptible.

This is well conveyed by Nakanishi’s seemingly continual scroll of peaks intermingled with clouds, crevasses, intermittent lines of black amid the endless blank white of the landscape. (La Prairie provided us with a notebook that recaptures many of Nakanishi’s ink drawings for the piece.)  Striped drawing as a technique is interesting because it conveys a horizontal event — in this case, the scroll panned across by a steady camera over the course of nine minutes — yet employs vertical lines to seemingly slice time before our eyes.

For “Eternal Circle,” he extended time and space through a nonstop 10-meter-long scroll; as the camera pans right, we become absorbed in the lines as waves, abstract patterns, rather than representative outlines and shapes.

“The presence of mountains heaved up over an extraordinary amount of time, the touch of wind and air I felt there, the expanse of night sky – these things make me feel the power of nature, like being human is an ephemeral existence,” Nakanishi says. 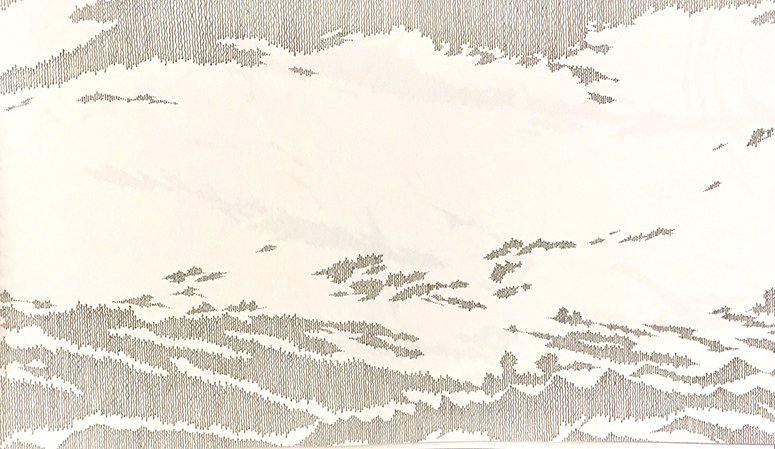 Pair this with Richter’s theme, which unfurls with ascending minimal progressions and variations over 4:30 (the piece is then repeated), building in intensity, then relenting, waxing and waning across an endless expanse of white and dark lines.

Best known for his genre-defining solo albums “The Blue Notebooks,” “Memoryhouse,” the eight-hour epic “SLEEP” and the chart-topping classical work “Recomposed By Max Richter: Vivaldi,” Richter says he first contemplated platinum itself while composing the theme for “Eternal Circle”: its rarity, purity and strength; how it favors certain frequencies and harmonic responses. He also thought about eternity. “Manipulation of time is a big part of composition,” the composer says, adding that “music is a time machine that propels a listener, compressing and extending time for us.” We are all basically “storytelling machines,” says the British-German composer, and “music is a landscape for our minds to inhabit.”

La Prairie has been linked to the world of art from its very beginning: from the aesthetic expanse of the Clinique La Prairie in Montreux to an early encounter with contemporary artist Niki de Saint Phalle, to its recent restoration of Piet Mondrian paintings at the Swiss Fondation Beyeler. Think of them as art explorers, pioneers, adventurers — but in the field of cosmetics.