What do you have? The band Utopia Avenue, from David Mitchell’s eponymous novel, which follows an English group’s rise from the damaged remnants of other broken bands into brief apotheosis. 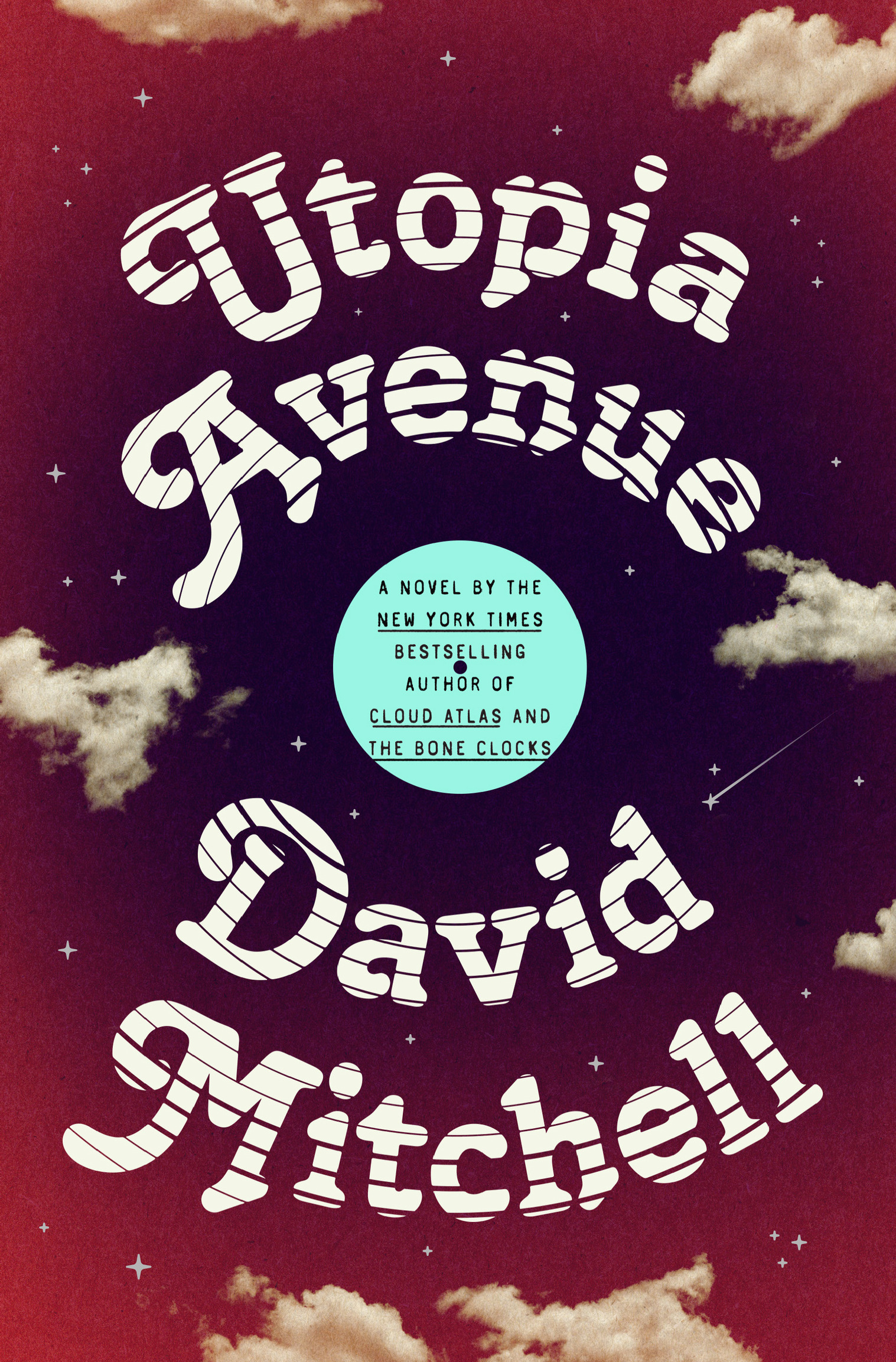 Folk singer Elf Holloway, bassist Dean Moss, spooky guitar bender Jasper de Zoet and knucklehead drummer Peter “Griff” Griffin are not sure what they are when they’re thrown together by new manager Levon. Maybe, as Elf puts it, they’re “a mix of Dean’s R&B, Jasper’s strange virtuosity, my folk roots, Griff’s jazz.” Maybe something a bit more dark and psychedelic. Imagine a cross between early Fleetwood Mac, Fairport Convention and The Animals. A bit of early Pink Floyd blended with Pentangle and Jefferson Airplane, maybe. (To better steer your ears, Mitchell has curated his own “Utopia Avenue” Spotify playlist, loaded with ‘60s deep cuts from the above, along with Buffy Sainte-Marie, Al Stewart, The Hollies, John Martyn, one-off baroque psychedelia like Fuchsia’s Me and My Kite and more. Find it here.)

Cleverly, Utopia Avenue tells its story in the form of three sections matching the band’s sequential albums, each divided into sides A and B, with chapters that double as song titles. Mitchell charts the arc and backstory of this plucky quartet, from fledgling gigs to cult rock festival stardom, sprinkled with tragedy and comedy, brimming with metaphysical moments and rock cameos.

Rock legends show up left and right. We catch a pre-fame David Bowie, walking down the stairs of a Soho club, bumming a cigarette off Dean. An ill-fated Brian Jones turns up at a party, peering into the third eye of Jasper, who’s plagued by strange sounds in his head. Griff hangs out with Keith Moon while Elf gets career (and sexual) advice from Leonard Cohen and Janis Joplin on the rooftop of the Chelsea Hotel. They’re all part of the texture of the Mitchell-verse, like a rock Greek chorus providing pithy quips as the band waggles its way to success. (Cohen line: “The snag with Paradise is, it’s hard to earn a living there.”)

After so many rock diaries and biopics, from Almost Famous to Bohemian Rhapsody, you’d think there’s little turf left to tread surveying the ‘60s-‘70s rock landscape. But Mitchell has myriad concerns in mind. He sets his story in a past of great social strife, and ties it (obliquely, sometimes too overtly) to our current political and planetary struggles. There are bits about growing up, recognizing one’s sexual identity, mental illness, forgiving the sins of your parents, and — by all means  — avoiding police in Rome who have a habit of planting drugs in your pockets.

It ventures into even odder spaces. Jasper is beset by an internal voice he dubs “Knock Knock” — but it’s no setup for a joke. Somewhere in the middle, Utopia Avenue veers perilously into sci-fi, time travel and metaphysics, with characters from his previous novels creeping into this universe. (Jasper is distantly related to the titular hero of Mitchell’s 2010 novel, The Thousand Autumns of Jacob de Zoet; at one point, we even hear a recording of The Cloud Atlas Sextet by composer Robert Frobisher playing in the background.) Shape-shifting into a completely different novel — after setting up such conventional character arcs — takes some chutzpah, but Mitchell pulls it off.

There are some misfires. Mitchell seems to have a tin ear for American slang and cadence (is it just me who notices this?), and the book’s coda alluding to #MeToo and Vietnam draft dodgers with “bone spurs” kind of feels tacked on, perfunctory. The cameos can sometimes spin out of control — like placing Francis Bacon in a jazz club where Bill Evans is hunkered over a nearby piano. It can become a little like ‘60s wallpaper.

Most convincingly, though, Mitchell shows us the nuts and bolts of writing songs and playing in a band. We get to see how Elf, Dean and Jasper come up with their lyrics, their best hooks, as they explain in a radio interview:

“The best pop songs are art,” says Jasper. “Making art is already a political act. The artist rejects the dominant version of the world. The artist proposes a new version. A subversion. It’s there in the etymology. Tyrants are right to fear art.”

“And music scares ’em shitless,” says Dean. “It’s the hooks. Once a song’s hook’s in yer, there’s no swimming off. That’s the Hook Game. One in the verse, one in the chorus.”

Bands are funny organisms. My theory is that even one gathering of people playing instruments together is enough to generate myth, or at least the semblance of a dysfunctional family. They may be bound by common purpose, but it’s almost a cliché that the path to success contains the seeds of its own destruction. Every mistake becomes magnified, almost as though the universe is conspiring to rip everyone apart. Very few novels get the terror of a first gig right as Mitchell does:

“You played too fookin’ slow.”

Dean looks away in disgust. Elf’s strumming was pointless and her harmonies were off. Jasper’s solo failed to ignite. Instead of a three-minute firework display he offered a minute of squibs that went nowhere.

Along the way, Mitchell tosses out throwaway lines that could double as rock lyrics (“Every saying has a B side”). Not just musicians, but songs make crucial cameos. Waterloo Sunset. All Along the Watchtower. Albums: “Sgt. Pepper’s.” All four sides of “Blonde on Blonde” in the background. The details add texture, context.

The flowering of music and culture in the ‘60s is one of those moments in history that Brian Eno describes as “scenius” — a particular scene that allows genius to cross-pollinate for a short time.

But in Utopia Avenue, that moment is short-lived. By the time the Utopians find themselves partying with Jerry Garcia in Haight-Ashbury, or hanging with the Laurel Canyon crowd of Joni Mitchell, Crosby, Stills and Nash, and an inscrutable Frank Zappa (who warns that, despite Joni’s song, their hippie Eden is no Paradise), you know the party is almost over. Altamont and the Manson Family are lurking just around the corner.

In Mitchell’s novel, Utopia Avenue spend a long, long time looking for the road to paradise. What’s left behind are the songs, Elf reminds us.

“Art is memory made public,” thinks Elf. “Time wins in the long run. Books turn to dust, negatives decay, records get worn out, civilisations burn. But as long as the art endures, a song or a view or a thought or a feeling someone once thought worth keeping is saved and stays share-able. Others can say, ‘I feel that too.’”