An exercise enthusiast and former sexy starlet — let’s call her “Penny” — hops online most days to promote home-based exercise routines during this seemingly endless lockdown. And she earns cash while doing it.

Welcome to the world of Kumu.

Viewers on the other side of Kumu — a Filipino-based community phone app that’s short for “Kumusta” — watch Penny perform live in sports bra and shorts and pay her “diamonds” which convert to cash through Google AdSense, GCash and even Western Union.

It sounds a little like Hustlers, the JLo movie from 2019 about female club performers who figure out how to peel fat stacks off of ogling voyeuristic viewers.

But hop onto Kumu, which began way before COVID but has drawn a lot more locked-down viewers since then, and you’ll notice that most of the content is not of the salacious variety.

Some of it’s wacky. Contest shows are popular. One called Carla Cab Countdown shows you short videos and lets you answer questions live to win coins. (“Anong parte ng katwan ang matatamaan?“ or “Which part of the body was hit” by a flying Coke bottle in the video.) The randomness and slapdash approach is kind of the point, and definitely part of the charm. And it also seems to have real earning potential.

One transgender performer claims to rake in about P200,000 a month from diamonds from her 60,000 viewers. That streaming feed mainly involves chatty, comic reflections on the day-to-day of being transgender in the Philippines. Of course, much of the enthusiastic support comes from the LGBQT community, but also people that just like listening to something while they’re equally stuck at home, desperate for entertainment. (Netflix only takes you so far.)

When you sign up, Kumu asks about your interests (Fitness, Food, Contests, Entertainment, Comedy, Beauty, etc.), but you can skip that algorithmic part; you’re then generously gifted with “100 free K coins,” which, when sent to people whose video streams you watch, earn them “diamonds.”

There are people talking about pets, or cooking, or just their daily lives. Some streams are advertised with pretty nifty come-on graphics, promising viewers musical theater, rap, beauty and makeup, and lots of love, love, love. Others are just regular folks, talking together on Zoom-type chat spaces with lots of comment threads streaming up. Heart emojis and coins float by too, which translate to diamonds for the hosts.

It’s a pathway many people are finding to earn cash during this shutdown. Even people who probably hadn’t nurtured online personalities before find they can secure some kind of audience on Kumu.

What’s the appeal? My sister-in-law Jennifer — who clued me into this phenomenon — says it’s about the normalcy of these people, even in this “new normal.” They’re not exactly celebrities, and anyway, celebs probably wouldn’t focus on this sort of low-hanging platform. The content is more home-based, more local and specific. More Pinoy. More relatable. 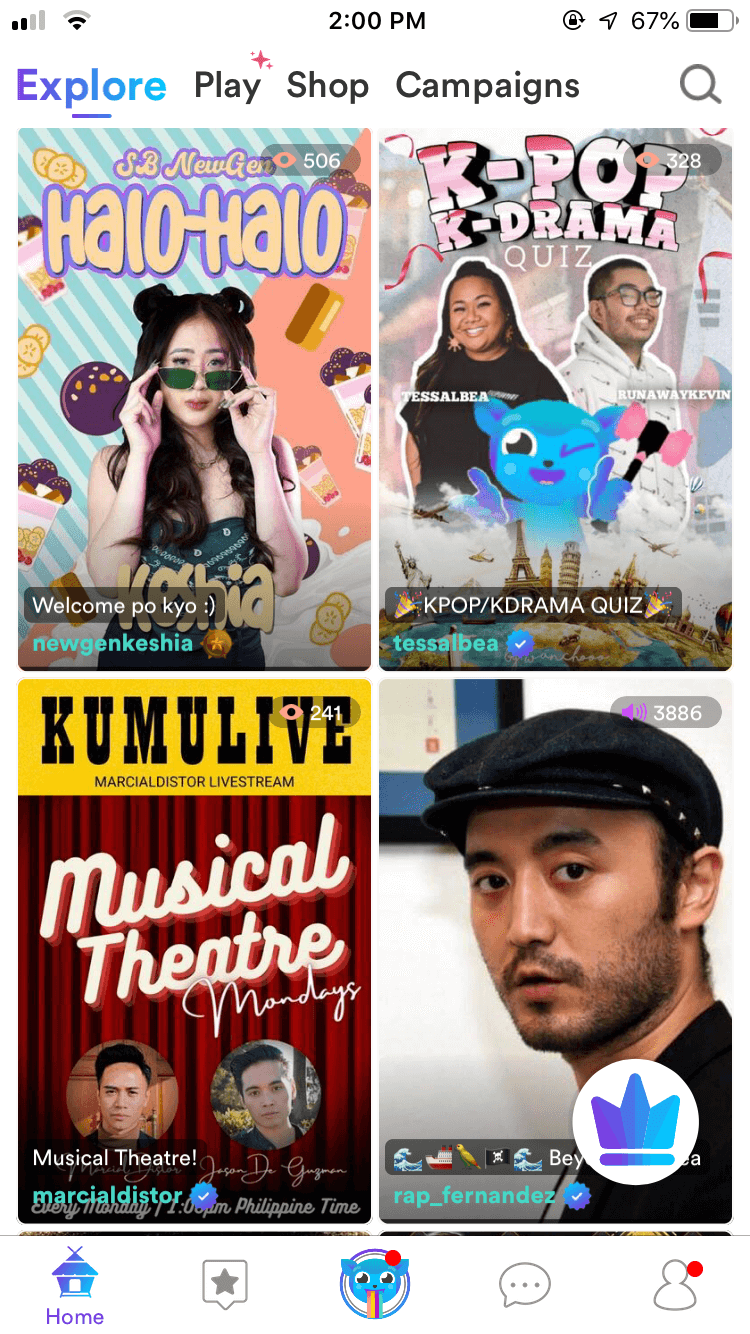 There are K-pop and K-drama quiz shows. Christmas carol karaoke sing-alongs (we’re in the “ber” months now, after all). Dudes who sit with a microphone and acoustic guitar in their own homegrown version of a TV show, playing Extreme’s More Than This and occasionally hitting the applause button as a prompt asks you to send them “Halo-Halo” points and you earn “Kurot” (“pinch”) points in return.

Many streams involve a host streaming live in the middle of a bunch of viewers, à la Zoom, and doing wacky or pa-cute poses while someone reads lovelorn poetry. Words like “astig,” “kilig” and “torpe“ come to mind.

You know how, during lockdown, people will stay onscreen on their phones with loved ones all day long? They’ll just lean their phone against a coffee mug and go about their business and chores inside their room while the FaceTime stays on, monitoring each other’s every move? This is a one-way, monetized version of that.

What I notice is there’s very little political shading, one way or the other. Which also might be part of Kumu’s appeal. If you want politics, there’s always Facebook, after all.

While some may do sexy dances or exercise routines, responding to viewer “requests” (and coins) to go just a little sexier, it’s worth noting that there is online “policing” of the content and streaming. You won’t see Hustlers-level kinky play, and each thread comes with a warning to “Report any bad behavior by going to the user profile and pressing the ! button.”

I’m not really sure what the line is for “bad behavior,” but Kumu seems like a fairly harmless underground economy. Anyway, you don’t have to split profits with a club owner — unlike, say, YouTube, where content providers aspire to get enough viewers to earn from the parent company.

After my morning of exploring Kumu, I had quickly and gladly donated my 100 free K coins to various entertainers out there, frontliners on the streaming underground. Maybe, with all that’s happened during COVID, Pinoys are finding some truth in JLo’s final speech in Hustlers: “The whole country is a strip club,” her enterprising character says with a shrug. “You've got people throwing the money and you've got people doing the dance.” On Kumu, ordinary people are providing a service — a few fleeting moments of entertainment playing in the background, maybe even a few laughs — but instead of working for YouTube or some other platform, they get to control the pole.