For anyone thinking that 2021 will be suddenly and magically different from 2020 — here’s the awful truth: It won’t.

Even the most optimistic think tanks say that the earliest things will get back to “almost normal” in Manila — that is, in terms of being able to go out and interact with other people — will be by April or by the second quarter of this year. Doubtless it will take longer in the West with a longer, harder winter, dashing hopes for foreign travel anytime soon. (A comforting statistic in The New York Times says that Asians account for 30 percent fewer cases in the United States than Latinos, blacks and whites.)

“Watch out, though,” our expert hastens to add. “The pandemic will have a long tail. Consumer spending and retail sales are not expected to get back on track until the end of 2021. It will take time to repair the economy in terms of the jobs lost.” Furthermore, “while the lost monthly remittances of 2020 were made up by inflows from savings brought home by laid-off OFWs, we’ll see a big decline in early 2021.”

Says one medical resource person, “Depending on the availability of the vaccine and its acceptance by people, the disease will still be a challenge.”  Filipinos should see a clearer path to the delivery of vaccines, whichever that may be, “no sooner than June 2021.”

What will this all mean? Despite all the wishful thinking, it will be a bad case of déjà vu for all of us.

Habits learned over nine months won’t be easily broken. Here to stay are “online shopping and entertainment, call-to-deliver, and the Viber and Facebook community marketplaces,” according to our pundit. These now serve every barangay and almost all occupations, from builders to banks, ballet teachers and booksellers.

For answers about where 2021 will take us, culture-vulture Gerard Lico suggests we look at how the world responded to the first 20th-century pandemic, the Great Influenza of 1918. It did so with the organized geometry of Art Deco that aimed to make sense, not just of the chaos of the First World War, but also the deaths from the flu. Lico says,  “COVID-19 parallels the way that disease influenced and shaped modernism in the 20th century along the grids of medical science.”

He further explains, “Cholera, tuberculosis, typhoid, polio and the flu outbreaks prompted changes in how space was used, not just in tenements and expensive apartments, but also in entire cities. Necessary reforms had to be made in urban planning and waste management. On a wider scale, hygienic principles defined modernism itself with its ‘pure’ surfaces of glass and steel, airy spaces exposed to the disinfecting power of sunlight and the absence of applied ornament to underscore sterility.”

In 2021, expect the order and rationality of streamlined design to take over both the indoors and out.  Think of how the clean lines of the Rizal Memorial Coliseum — our most outstanding homage to Deco — is currently being found in Millennium Moderne. Its spare lines and utilitarian forms are comforting in a new crop of homes and gardens going up in the pandemic. These are expressed in atriums, rain gardens and open spaces, for example, designed by architect Joshua Cunanan for a private residence in progress. Natural materials such as ancient “pan de unan” stones, the local talisay and its African variegated cousin are set in geometric shapes. Reflecting ponds filled with goldfish and repurposed bihon-grinding stones provide restful respites.

David Guerrero, creative chair of BBDO Guerrero, puts it simply: Out will be in. On a social level, we are all now feeling a lot more relaxed when we meet people outside. Eating out will often literally mean eating outside. Going out will mean staying out. And outdoor exercise be the way more people stay fit.” That means running in urban parks or vacationing in beachfront villas as well as al fresco dining and rooftop bars.

The medicalization of our lives and tastes, however, marches on. Indeed, we’ll see more sensible fashion and cropped hairstyles. Easy maintenance is what we’ve all gotten used to since the unexpected closure of laundromats, salons, and the furloughing of yayas. And yet there will be hankerings for the impractical past, as the hit TV series Bridgerton demonstrates. Regency romance blossoms amid extraordinarily embellished homes and dresses. 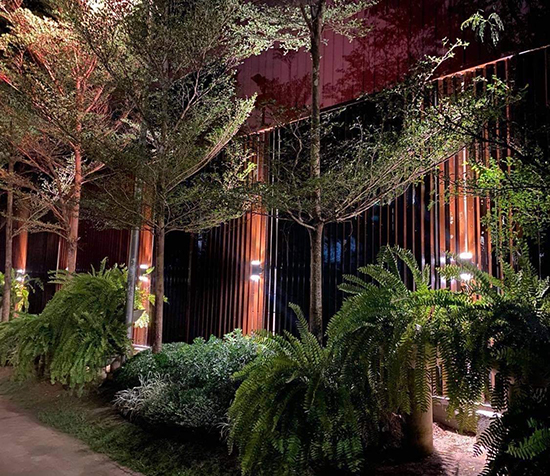 These two strands will dominate our new year. On the one hand, artist manager Derek Flores believes that both artists and collectors will gravitate to artworks drained of both colors and figures. “It will be a kind of new minimalism,” he opines. (Lico uses the term “achromatics,” for the whites, blacks and grays that are expected to color living spaces and will de-saturate our world.) Furthermore, observes seasoned collector Paul Campos, “2021 will see increased interest in abstract art because of its sensibility.”

On the other will be a thirst for luxury and the “quality spend,” compensating us for doing without in 2020.  One other cultural pundit adds, “Whether it be 19th-century old master, mid-century modern, or contemporary whiz kid, if an important work by a great artist comes on the market, that will always transcend trends.”

Both self-care and self-reliance will continue to be championed. All three are important and synergistic values; something we all learned belatedly when vitamins and essential medicines ran in short supply and the prospect of doctor’s visits became scant.

Eating right, however, need not be humdrum says, Bettina Osmeña, founder of Gourmet Corner, go-to purveyor of comfort food for Manilans. “There will be renewed interest in vegetables, if not outright vegan meals.  Snacks will be homemade potato chips, as well as dried kale, malunggay and okra crisps. Think calories that matter to build resistance and immunity. Frozen classics such as the classic callos and wagyu kare-kare, even burnt Basque cheesecakes, will remain favorites. For the home chef, pizza kits and DIY ramen from all the popular restos — and even directly sourced from suppliers — will be on trend.”

The mind-bending consequences of time on our hands will continue. All that free time will continue to drive us to discover new pursuits, empathize with various causes célèbre or controversy, whether it be the destruction of beloved buildings or headlined double-murders and to pounce unforgivingly on them.

Here is where we see the greater divide yawn between the more stoic, battle-heartened older set and the blithe but increasingly brittle millennial.  In September 2020, the DOH announced that calls to their hotline on the subject of depression leaped from 80 to 400 per month. The longer the pandemic takes to resolve, the higher the strain on the population.

In the wishful thinking department, finally, there’s the real prospect of a truly 15-minute city in 2021, defined by transport consultant Robert Siy as essentially  “cities made up of compact, dense and socially connected, mixed-use neighborhoods where everything you need to access (housing, jobs, shops, schools, parks, recreation and health services) is no more than 15 minutes away by foot, bicycle or public transport. Zoning regulations need to be modified to allow different uses, activities and population densities within the same area.” As a result, there will be continued pressure this year for sensible transport alternatives, from bicycle lanes to safer sidewalks.

More than ever, 2021 will be all about changing the narrative. That begins first by seeking to better understand the world around us. Agency man David Guerrero explains more: “The past is the future. We are going to be ever more concerned with telling stories about how we got here. From lockdown entertainment, we are seeing so many examples of how retellings of the past give greater meaning to and understanding of the present. Look out for more historical projects to be taking flight this year. From the Philippine Pavilion at the Dubai Expo to the Quincentennial Commemoration of Lapu-Lapu’s triumph over Magellan in the Battle of Mactan in 1521. There is a lot to understand about where we came from and many exciting ways to tell it.”

Perhaps that dose of déjà vu is just what we need to make sense of the incomprehensible.

Marvel imagines a world with no Avengers in ‘Heroes Reborn’

'The Great Gatsby' TV series in the works - report

Penlab komiks for the New Year