I am a sucker for old houses, or “heritage homes,” a fancier name for historical residences that exist today, fascinatingly rooted in their past glories somewhere in the mists of time. These homes paint a picture of their era, and the persons who inhabited them. Wandering around an old house is the best way to understand how people lived, what they thought, their values and aspirations, and how time eventually treated them. They are a time capsule of history — social, economic and political.

Mira Nila: A historical past blends beautifully with the present

I recently made a trip to visit heritage homes in Negros Occidental, accompanying my friend Gina Consing McAdam, a Londoner who never forgets her Ilonggo roots. Gina, together with the architectural photographer Siobhan Doran, is producing a book on the grand houses of Negros with the wonderful title Houses Sugar Built. Siobhan is taking the photographs and Gina is writing the capsule histories and profiles of the current inhabitants of the homes.

I had been on a tour of heritage homes of Bacolod and Iloilo maybe 12 years ago, and was eager to see the ones I hadn’t yet visited before. The main reason for my visit to Bacolod this time around was to see a home that I had only previously seen and admired from magazine photos: Daku Balay (Big House), built by the sugar planter Generoso M. Villanueva in the 1930s. It’s an impressive home built along Streamline Moderne lines, a late art deco style that emphasized horizontality, curves and often incorporated nautical elements reminiscent of the grand ocean liners of the day. 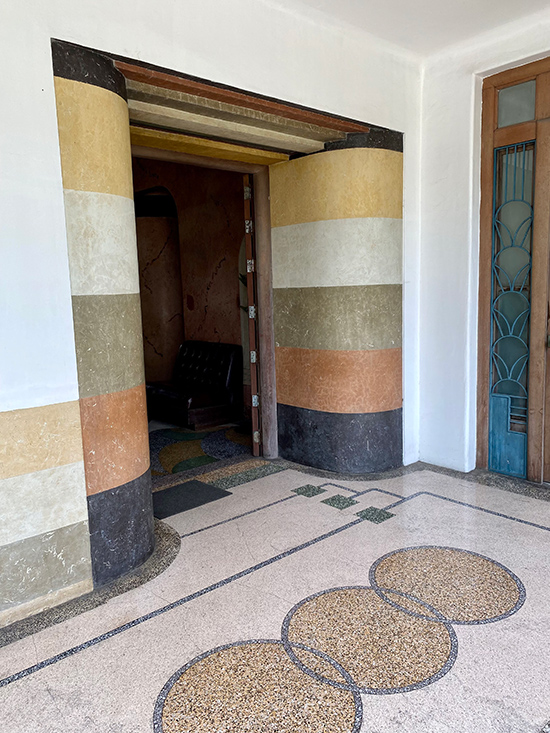 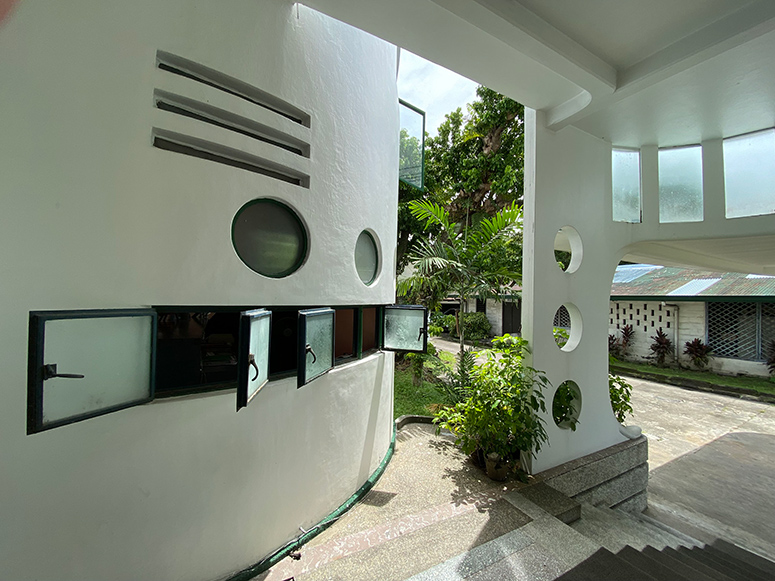 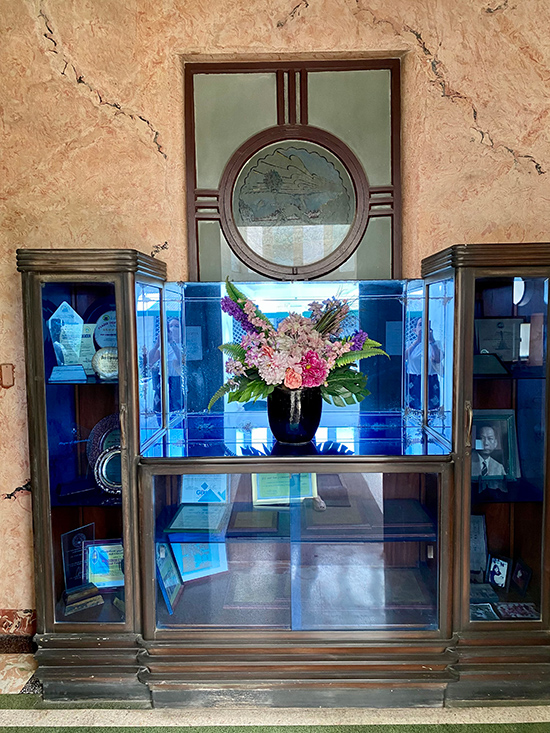 Specially designed foyer cabinet with glass and mirrors in the unusual, strong blue tint favored by the owner 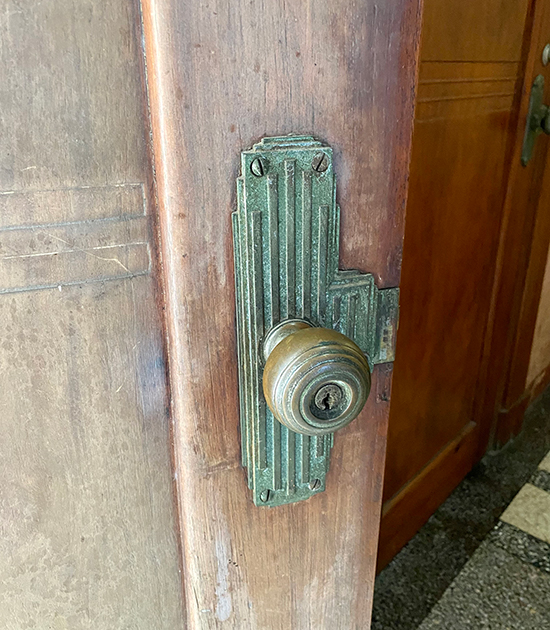 Metal doorplates, knobs and other fittings were also specially designed for the house.

Specially designed foyer cabinet with glass and mirrors in the unusual, strong blue tint favored by the owner

Metal doorplates, knobs and other fittings were also specially designed for the house.

Daku Balay was the tallest structure in Bacolod for more than 20 years, until the late 1950s. It had a floor area of about 1,600 sqm. and boasted the city’s first elevator. It was designed by Villanueva, together with a Cebu engineer and architect, Salvador Cinco. They engaged Filipino artisans from Romblon and Sorsogon for the stonework, and from Nueva Ecija for the woodwork. The workers were housed on the property together with their families until construction ended in 1936.

The house is replete with intricately detailed floors, walls and ceilings that echo the art deco theme. Colorful terrazzo flooring alternate with patterned wooden floors. The poured concrete walls and columns are embedded with painted swirls and flourishes using a technique that integrated the paint into the concrete permanently. Fanciful plaster reliefs abound on corridor walls and bathrooms. One of the second floor corridors has an expansive mural depicting the life and interests of Villanueva, especially in farming and agriculture. A bathroom has painted goldfish reliefs on the upper walls, while another has birds. An artistic niece, Lucille Villanueva, painted the interior glass accent windows situated all over the house.

As a Bacolod landmark heritage structure, Daku Balay was declared an Important Cultural Property by the Philippine government.

The attention to detail, aside from the architecture, was amazingly imaginative and a touch unconventional. Villanueva loved animals and integrated them as much as he could throughout the house. A pair of snakeheads finishes off the graceful curve of two sidewalls in the back entryway.

The “Spider Room” is a lovely room with a high ceiling where light pours in through a bank of elongated vertical windows, each punctuated by a small circular window atop. This fascinating space is named for the central coffer on the ceiling designed with a relief of a web with a golden metal spider and fly attached to it.

Aside from the spider tableaux on the ceiling, the walls are decorated with painted reliefs of monkeys, bats, and other creatures. The terrazzo flooring here is embedded with animal figures — I spotted a carabao, snake, sea turtle, unicorn, frogs and more. 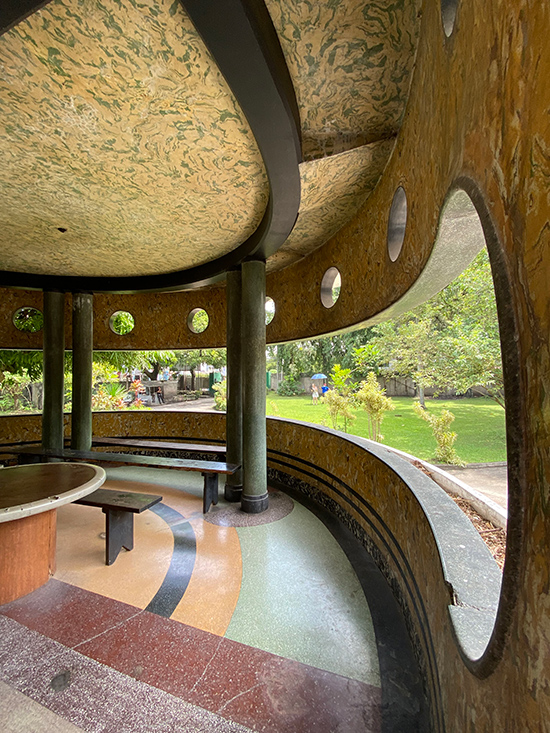 The spectacular half-moon balcony attached to the dining room with its curvilinear lines, extravagant swirls on walls and ceiling, and colorful terrazzo flooring 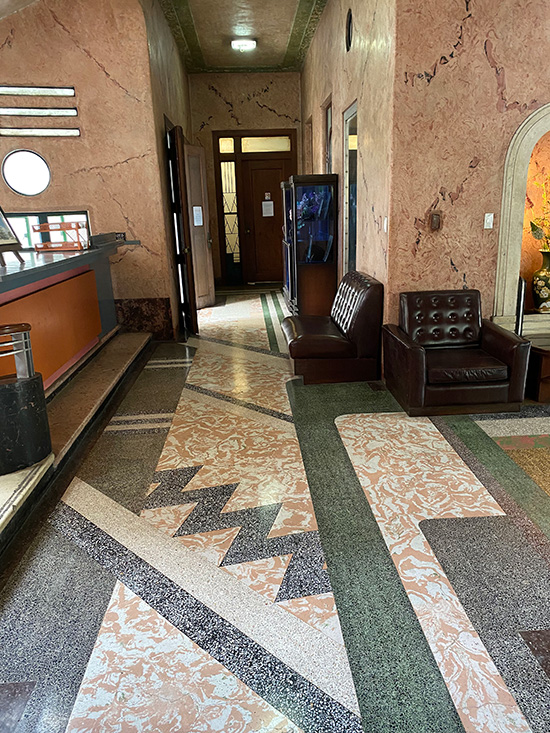 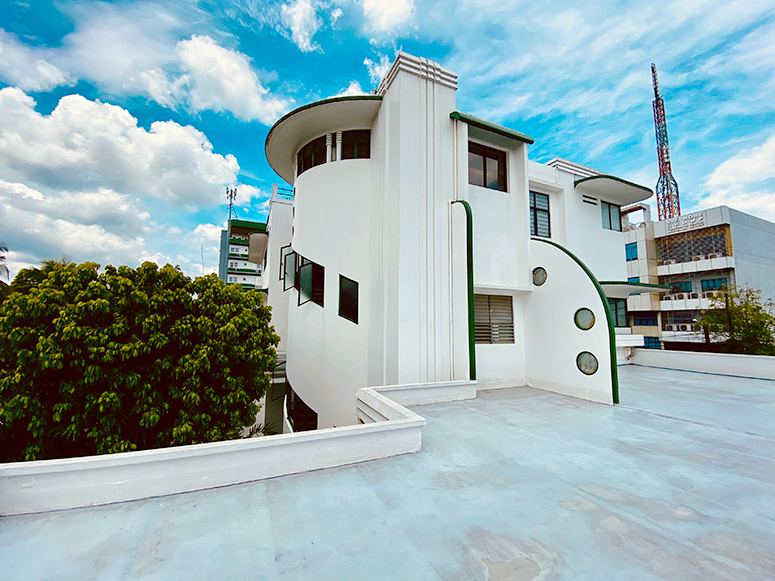 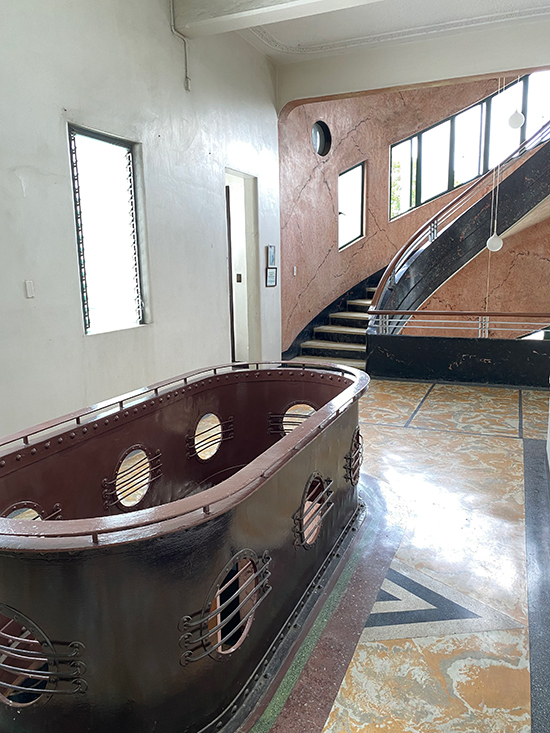 The view hole on the second floor above the entry corridor gives occupants a glimpse of guests below:  A wooden railing echoes the nautical theme, replete with portholes and metal fittings.

The spectacular half-moon balcony attached to the dining room with its curvilinear lines, extravagant swirls on walls and ceiling, and colorful terrazzo flooring

The view hole on the second floor above the entry corridor gives occupants a glimpse of guests below:  A wooden railing echoes the nautical theme, replete with portholes and metal fittings.

The house was clearly built for entertainment and has numerous spaces for socializing. Of note is a half moon-shaped balcony attached to the dining room on the ground floor. It’s a striking space, with a low wall for sitting, framed by a curved outline, circular openings on the upper walls, double columns, and a colorful terrazzo floor of intersecting shapes. Here, guests would retire after dinner to take in the fresh air and maybe indulge in a card game or two. The roof deck on the second floor is expansive enough for a large party and has a special railed balcony for musicians, a half-level below, jutting out over the edge of the house.

A spectacular curved staircase set into the far wall provides access to all the floors. On the second floor, situated directly over the entrance corridor, there is a large oblong viewing hole in the floor, surrounded by a low wooden balcony in ocean-liner style, replete with portholes and metal fittings. This was for the residents to have a view of guests entering and being entertained in the large reception rooms below. Furniture and metal fittings were also made-to-order, in art deco style to suit the home. Some of the mirrors and glass fittings had a curious strong blue tint, favored by the owner.

As a Bacolod landmark heritage structure, Daku Balay was declared an Important Cultural Property by the Philippine government. Currently, the ground-floor rooms of the house are mainly used as offices for the companies owned by the heirs of Villanueva. One of his grandchildren, Lilia Vargas Villanueva, is passionate about maintaining and restoring the home for possible use as a venue for weddings and conferences. 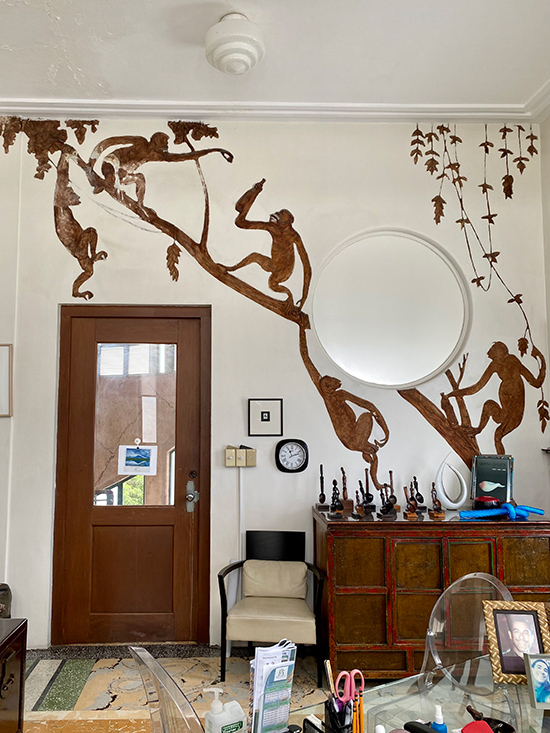 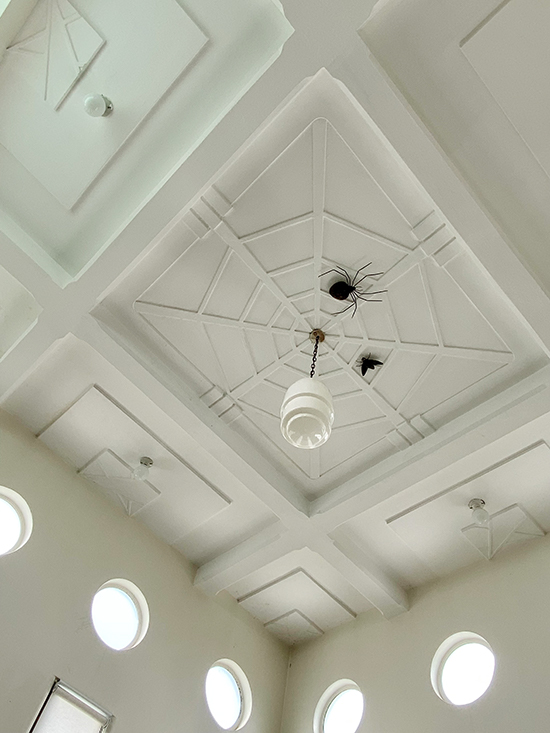 The central ceiling coffer of the "Spider Room” with web, spider and fly 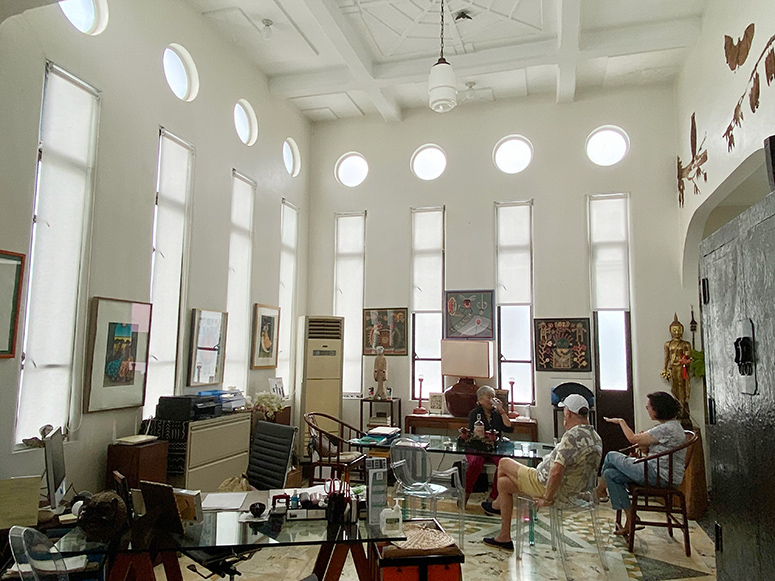 The central ceiling coffer of the "Spider Room” with web, spider and fly

Today, Daku Balay is a marvel of bold, creative construction and imaginative interior detailing that embodied its builder’s dreams. As a rare and invaluable link to the past, it reflects the aspirations, affluence and tastes of an era and a place — Bacolod — in prewar Philippines.

Daku Balay has survived gracefully for more than 80 years, and I sincerely hope it survives for at least as many more.

Lisa Ongpin Periquet loves to tour places in the Philippines, visiting old houses and tasting local food delicacies. She believes in the preservation of Philippine cultural heritage, especially the adaptive reuse of heritage structures. Lisa is also one of the founders of the contemporary art fairs Art Fair Philippines and Art in the Park.