Style Living Self Celebrity Geeky News and Views
In the Paper Shop Hello! Create with us
Kara Santos

Step back in time to learn more about the country’s former presidents, all based on the vehicles by exploring a unique museum in Quezon City.

The Presidential Car Museum (Museo ng Pampangulong Sasakyan), which opened in 2018, features the largest collection of historic state cars in the Philippines, making it a notable destination for car enthusiasts and motorheads.

Located within the Quezon Memorial Circle in Quezon City, the Presidential Car Museum is one of the 27 history museums under the National Historical Commission of the Philippines (NHCP). Admission is free, parking in the area is spacious, and visitors are allowed to take pictures inside, making it a worthwhile spot to check out if you happen to be in the area.

As of October 2022, which happens to be Museums and Galleries Month in the Philippines, walk-in visitors are allowed and no reservations are required to visit.

Philippine museums to visit for a quick trip down history lane

The vintage cars on display serve as historical artifacts that give visitors new insights on Philippine history and former leaders. It’s great to be able to see them all in one place right in the city as they were previously scattered in various parts of the country.

Spearheaded by NHCP and inaugurated last August 19, 2018, the museum houses presidential and historic cars that have been painstakingly restored and conserved for the appreciation of the Filipino people.

Trivia on Presidential Cars on display

The museum currently contains 12 presidential cars used by 13 past presidents, starting from Emilio Aguinaldo who ruled during the First Republic in 1899 to Gloria Macapagal Arroyo, who ended her term in office in 2010.

Each display includes the car’s history and technical specs, as well as a profile of its user, making it an interesting history lesson through wheels.

Presidential cars of Carlos P. Garcia and Benigno Aquino III are not included in the museum as the former was never recovered, while the latter is still in use. President Noynoy Aquino reportedly used his own Toyota Land Cruiser 200 since he assumed office. Meanwhile, Sergio Osmeña opted to use the Packard of his predecessor, Jose P. Laurel.

Here’s the full list of presidential cars and who they belonged to and some interesting trivia about each of the vehicles.

The country’s first state vehicle was actually a horse-drawn carriage with wood finishing and vinyl interiors. The Packard Six was among the top luxury car brands of the 1920, which Aguinaldo only obtained in 1924 after his presidency. With wood and vinyl interiors, it was one of the earliest American vehicles to be exported and a popular choice for state vehicles.

Before his death in 1964, Aguinaldo donated the vehicle along with his house in Kawit to the national government.

Considered the most aerodynamic car of its era, the Chrysler Airflow was a rare sight on the road during its time because only 30,000 units were sold throughout the four years it was in production. No other Chrysler Airflow model of any grade has been imported into the Philippines.

This vehicle was designed for society’s upper class and heads of state, with interiors decorated with the best fabrics, leather, and carpeting, including a wool ceiling. It also had a glass partition that could be lowered if the president wanted to drive the car himself.

After Laurel’s term, the same vehicle was used by President Sergio Osmeña, as a new presidential car was not a priority of the administration following the Second World War. President Osmeña opted to use the existing state vehicle which was found safely hidden in Malacanang.

The Fleetwood Series 75 was distinguished by a massive vertical grille that stretched out to the fenders in a large hood. The Cadillac was labeled as one of the more powerful cars of its era because of its engine.

This luxury brand of Chrysler has a long wheelbase and partition window inside, with an engine that could propel the car which weighs two tons. This car was one of the first vehicles to offer power-assisted disc brakes and a 12-volt electrical system.

While President Magsaysay still used Quirino’s Crown Imperial, the government purchased a Cadillac Series 75-23 as a supplementary vehicle until the first term of President Ferdinand Marcos. This car belonged to the luxurious Fleetwood models and is considered one of the best models of the Series 75-23 in the world.

The Cadillac DeVille on display is not the actual unit used by Diosdado Macapagal, but a similar model of the first generation vehicle which was made from 1959 to 1960. This is a pretty rare vehicle, as there are just 20,000 of these cars worldwide and less than 100 units were officially earmarked for export.

The elegant Lincoln Town Signature Series was favored by President Ferdinand Marcos Sr. because it could be expanded to accommodate a spacious interior. Even in the 1980s, this vehicle had high-tech features such as keyless entry, and a digital gauge cluster with a trip computer that indicated “miles to empty” and “estimated time of arrival."

The relatively simple and understated-looking vehicle that the administration of President Corazon Aquino chose had built-in security features. This was the first state car to feature bulletproof panels and glass windows measuring two inches thick.

Similar to his predecessor, President Ramos chose the Mercedes-Benz 500SEL initially assigned to Aquino’s vice president Salvador Laurel, though his vehicle was not as heavily armored. However, it has exclusive features like a special switchboard that houses controls for lights and sirens, as well as a button for control modules and fuses, and thinner bulletproof panels.

President Estrada’s 1993 Mercedes-Benz S600 had doors with thick steel plates and Kevlar used in bulletproof vests. The car also featured protection from explosives, a self-sealing fuel tank, and an alarm system. It also had a television and telephone installed.

President Arroyo chose one of the largest cars of the era, a stretched 1993 S600 limousine that was heavily armored. The car has run-flat tires and engine block protection against sniper fire.

Other vehicles of historic value

Aside from the presidential cars, the museum also displays other historic vehicles, including a turn-of-the-century carriage and a World War II-era jeepney. Four cars in the collection are classified as “other vehicles of historic value.”

Before cars, the main way to get around was the engineless, horse-drawn kalesas. This was utilized by Leon Apacible, one of the authors and signatories of the 1899 Malolos Constitution. The carriage was used by his family up until the 1940s.

The first car with a Philippine flag that was Quezon’s presidential service vehicle. It had a steel roof and a grilled fender. He turned it over to the five-star general in 1937 to honor him as the new Field Marshal of the Philippine Army.

MacArthur gifted his 1943 Willys Jeep to Ramon Magsaysay who served as Secretary of National Defense during the Quirino administration. Though fitted for civilian needs, the jeep resembled its military counterparts, with its gas tank, a dependable shovel, and a collapsible radio antenna. Willys Jeep served as Magsaysay’s service vehicle.

Interestingly, the interiors of Imelda’s car had storage for wine and champagne bottles at the back, a set of four crystal champagne flutes, and a built-in humidor for Cuban cigars. Only 516 models of this car exist and were produced worldwide. 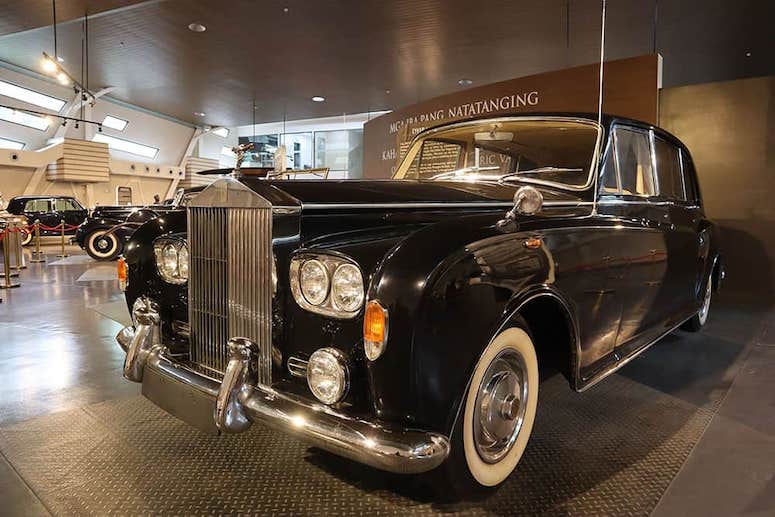 Other famous personalities to own a Rolls-Royce Phantom V include Queen Elizabeth II, Mohammad Reza Pahlavi, the last Shah of Iran, and legendary musician John Lennon of The Beatles.

Just going around and looking at all the vintage cars on display can tell you a lot about the people who rode them. These elegant and dignified automobiles symbolize the changing styles, personalities, and socio-economic priorities of former Philippine presidents and figures.

Visiting museums is always a great way to learn more about the country’s culture and history, and this car-themed museum is a worthy destination for car clubs, rider groups, motoring enthusiasts, or just about anyone who loves vintage and classic memorabilia.

The Presidential Car Museum is located inside Quezon Memorial Circle, Elliptical Road, Quezon City. It is open from Tuesdays to Sundays, from 9:00 a.m. to 4:00 p.m. Admission is free to the public. For more details, visit their Facebook page.

NOTE: This article was originally published on Wheels.ph.