“How do you convey affection without the language of touch?”

This is one of the most pressing questions that has gained resonance with the advent of a pandemic that has prevented people from expressing themselves in an intimate manner. No more hugs, kisses, nor even fistbumps or handshakes.

But maybe we can learn from a lesser-known manga about gentleness and communication without touch, and even have a little introspection on what we, as people who crave for physical intimacy, can learn how to express love in a way that doesn’t have to require touch.

(Warning: Contains spoilers for The Girl From The Other Side)

This is the lesson that resonates loud and clear in the manga, The Girl From The Other Side, made by illustrator and manga artist, Nagabe. Currently, it has received an OVA (original video animation) by WIT Studio (also known as the studio that animated the first three seasons of Attack on Titan).

Very few people are familiar with this whimsical tale with gothic overtones. This manga is reminiscent of those small children's books that depict idyllic woods and magical beings.

The art of the manga has gotten people interested, as they see this tall, shadowy, animal-like monster clothed in fine waistcoats and a cravat, while accompanying this tiny, pale being who seems very delicate to the touch.

The imagery of duality, especially with the gorgeous backdrop of lush forests and old towns, gives life to a world that seems to only dwell in fairytales.

However, all is not as bright as it seems. The main character, Shiva, lives outside of civilization separated by a wall with only a tall, dark creature whom she calls “Teacher” for companionship.

Their lives are rife with uncertainty as a plague-like curse spreads rampant that corrupts any person who has been touched into strange, black, theriomorphic creatures called “Outsiders”.

Teacher himself is considered a cursed being, an Outsider that’s an infectee of the curse. But he’s careful to never touch Shiva, or allow other Outsiders to do so.

Much of the story revolves around how they interact without having to touch, but displaying affectionate gestures towards each other such as doing chores and creating flower crowns. Nagabe paints a picture of gentleness and kindness on how to display love within the constraints of limited touch.

Due to this, Shiva expresses her love to her guardian through words of affirmation. Teacher is a brooding character who internally worries for her safety, but she often keeps his chin up even when her life is in danger.

Teacher on the other hand, provides protection, and is willing to give his all for the child, who has restored his sense of purpose.

Each interaction is laced with intent and softness, and making it clear that they have this strong bond and fondness that defies limitations.

One panel of the graphic novel that stands out above the rest is when Shiva gets injured by spraining her ankle. Of course,Teacher can’t carry her, so the challenge lies in how to get her home safely.

To bypass this, he takes his favorite umbrella, which is now bent out of shape, and holds it out for her so she is able to support herself.

Shiva herself is an interesting character, being a seven-year-old that’s always jolly, helpful and caring. And yet, despite her cheerful, easygoing nature, she has this air of loneliness to her.

She has been abandoned several times, and now her only companion lives in fear of touching her, not wanting the child to be infected with an incurable disease.

But on both sides there’s this delicate yearning. In the manga, it’s more obvious that she simply wants to be held. Even though it is forbidden, she sometimes wants to be touched, to be held – even if it’s as small as a brush of the hand.

Like all little children, she wants to be physically close to their parents or guardians. This is made more of a central point in the OVA.

Both sides long to hold each other, despite knowing that they cannot, due to the curse. It gets to the point where Shiva gets a nightmare where she is infected by an Outsider and her tiny hand becomes black and bony.

She knows the consequences of being touched will mar her and yet, like those stuck in a situation such as that, she still craves physical contact. Teacher, even more so, there are close calls where he almost accidentally touches her but recoils, knowing the danger it imposes. 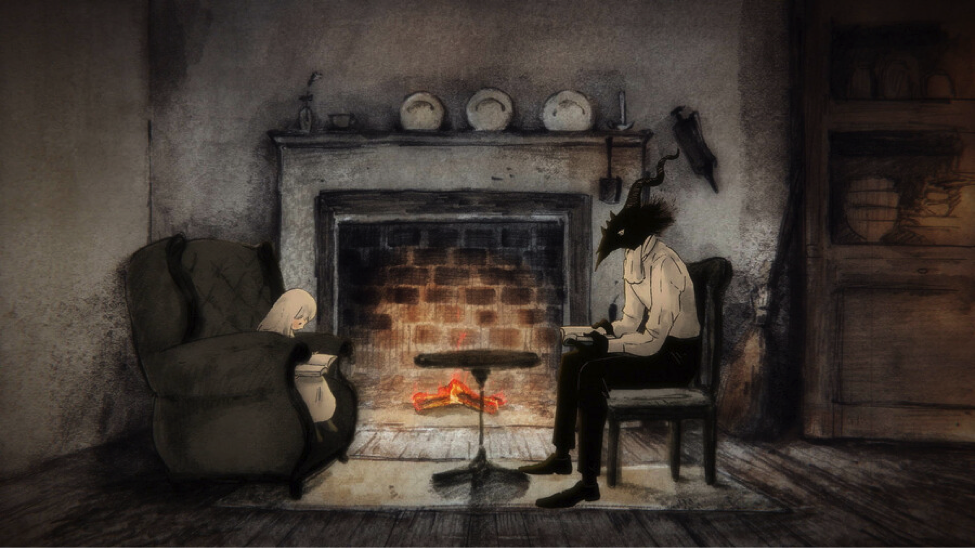 Shiva falls asleep while reading as Teacher guards her.

And yet he looks at her with longing, wanting to express how much this child means to him and how much meaning she’s given to his empty life.

We get scenes where Shiva falls asleep on a chair from reading books, but Teacher, seemingly wanting to carry her to bed, just wakes her so she can walk there by herself.

They offer alternative gestures that show their appreciation for each other’s company in small ways.

They display this on Teacher’s part by helping cook Shiva’s favorite cheesecake and making her tea when she wakes up in the middle of the night.

She also shows her appreciation through little doodles of them together and urging him to see gorgeous meteor showers out in the lakeside.

If there was a discourse concerning the five love languages, coined by Gary Chapman, Ph.D., their interactions would give plenty of people a field day on what kind of love language both Shiva and Teacher use to express their love.

We can learn from this graphic novel, that actions do speak louder than words. But when no touch is given, is it still possible to be able to interact with the ones we hold close to our hearts?

The answer is yes, through acts of service, words of affirmation, quality time, and gift, whether big or small.

However, humans can only go so long without the touch of another, making it a subversion. 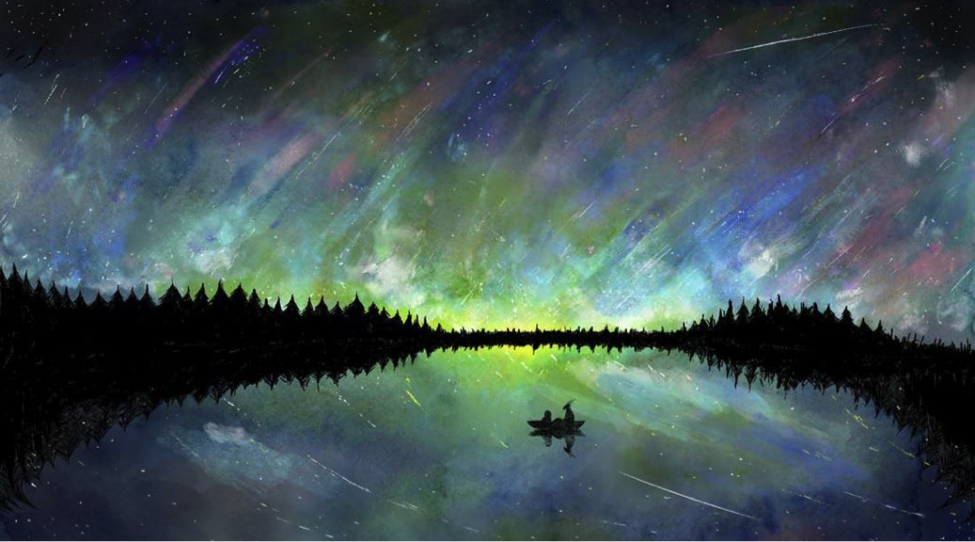 At the lake, where Teacher and Shiva peacefully float.

It’s quite odd that this manga, which the creator states “excludes elements that could remind of the real world as much as possible” has resonated with many themes of loneliness, isolation, and companionship while being locked out of the loop, as well as the inability to physically touch due to a pandemic that has swept the world.

We have grown familiar with that yearning, adjusting to a world where you cannot display affection due to the fear of contracting a virus. Where people live in fear and suspicion, and alcohol and soap is scrubbed furiously, and touching every surface could mean life or death.

It teaches us about the quiet desolation many of us feel during the quarantine and the want of being physically held. However, we can hold on to a hope that one day, this fear will fade into nothingness, because eventually, the time will come where we can freely hold our loved ones again.

Will Teacher and Shiva physically express their affection for each other? Will they hug? Well, the only way to find out is to read the manga, which is available for purchase at Fully Booked.

TAGS: Manga OVA The Girl From The Other Side WIT Studio Seven Seas Entertainment

Rebekah is a storyteller who wants to continually improve by learning about different storytelling mediums. In the meantime, she churns out articles and laughs at memes.