No costumes inspired by warrior princesses and revolutionary generals this time. Instead, the women treated viewers to a spectacle of colors and patterns, shades and textures, dainty details and soft, feminine silhouettes, as they paraded before the cameras in their Filipiniana finery inspired by Manila’s Carnival Queens.

As expected, online chatter among the country’s “beau con” fans grew to a deafening crescendo on the evening of Sept. 23, as people behind Miss Universe Philippines officially kicked off this year’s search by uploading a short video on YouTube featuring the 28 contestants in their chosen national costumes.

Less than seven minutes long and shot at the new Clark International Airport, the video grouped together the candidates according to geography: Luzon, Visayas, Mindanao and the National Capital Region.

Although one might argue that you could walk the streets of Metro Manila for hours these days without probably finding a single woman wearing a baro’t saya or terno in broad daylight, it felt good to be transported to a bygone and more genteel time if only for a few minutes through these beautiful women.

Owing to this year’s theme paying homage to Manila’s Carnival Queens, no one came to the show as a warrior princess a la Princesa Urduja or, worse, a female version of Lapu-Lapu or Gen. Gregorio del Pilar. Thank goodness!

Instead, the women treated viewers to a spectacle of colors and patterns, shades and textures, dainty details and soft, feminine silhouettes, as they preened, swayed and glided before the cameras in their respective ideas of the ideal Filipiniana ensemble worn by beauty queens in early 20th-century Manila.

‘It still feels like I’m dreaming’: Miss Universe PH top 28 delegates in the final stretch to the crown

Like in years past, the winner of the Best National Costume would likely be announced on coronation night. Had this long-time fashion observer been given a seat at the judges’ table, I would have voted for these Top 10 looks in no particular order. 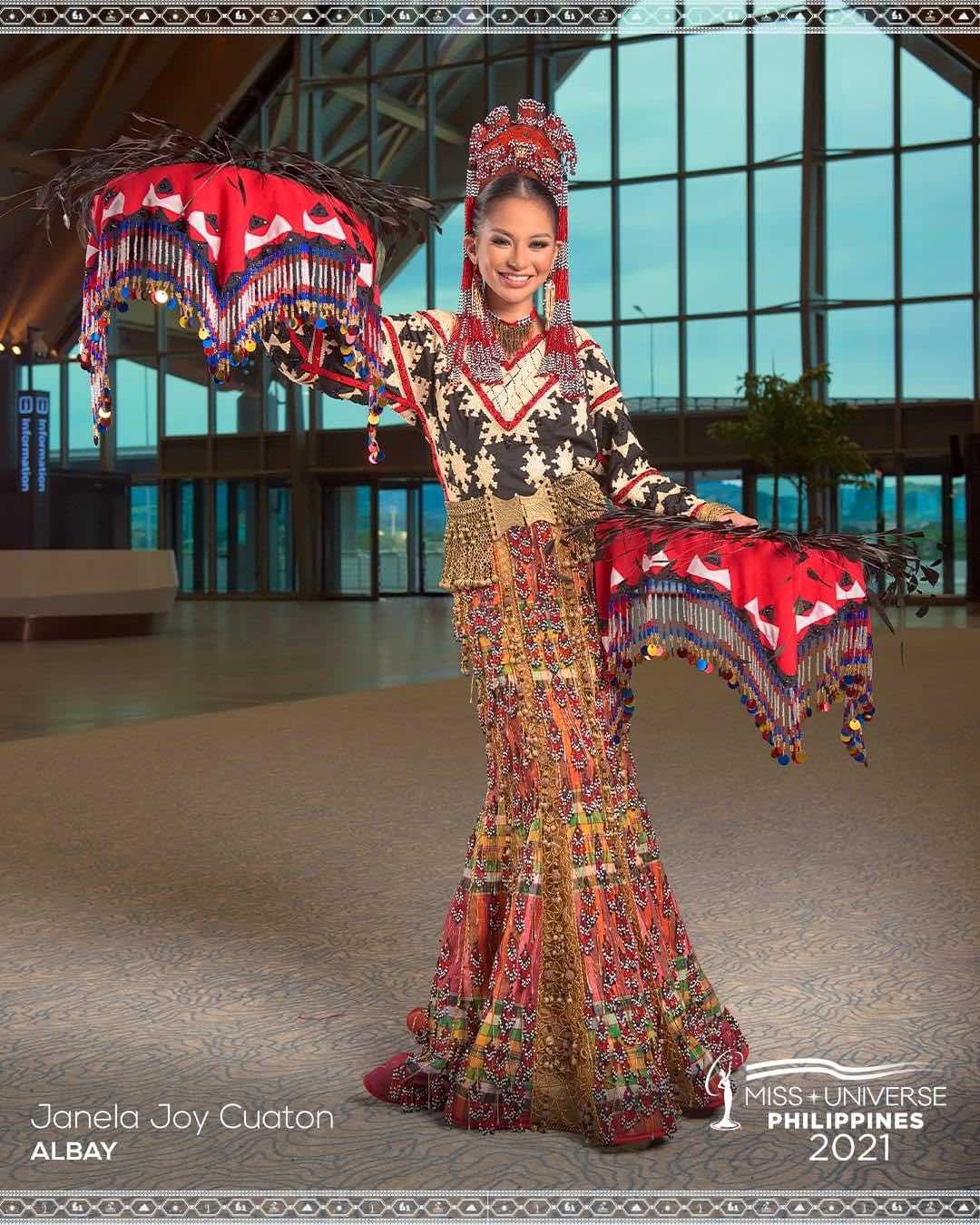 Because of its use of various Mindanaon fabrics and elements, including those iconic tinkling bells, the costume’s Bicolano authenticity is suspect. But visually, it works. And Janela seemed to be having a great time wearing it, especially when she let those pair of tasseled, beaded and framed fabrics she was holding rest on her shoulders. Result? An instant terno! Well, sort of. 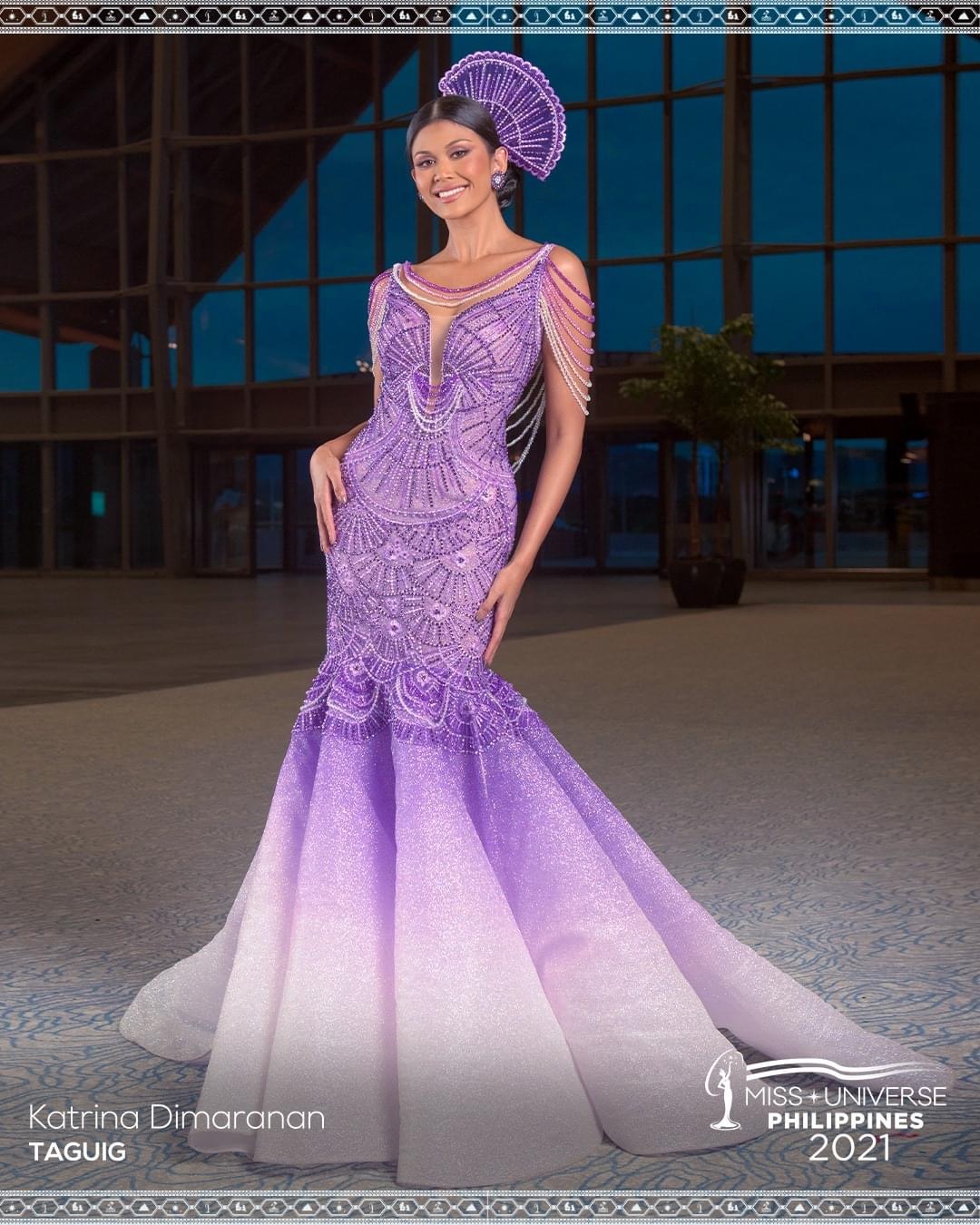 With that height, dusky color and broad shoulders, Katrina could have probably worn a dress made out of sackcloth and still come out looking smashing. Paired with a seasoned designer like Val, she demolished most of the competition in a semi-beaded lavender-and-white confection that looked more like a gown than a costume. In lieu of terno sleeves, the dress comes with strings of beaded and dangling tassels that cascade on her arms, neckline and back. 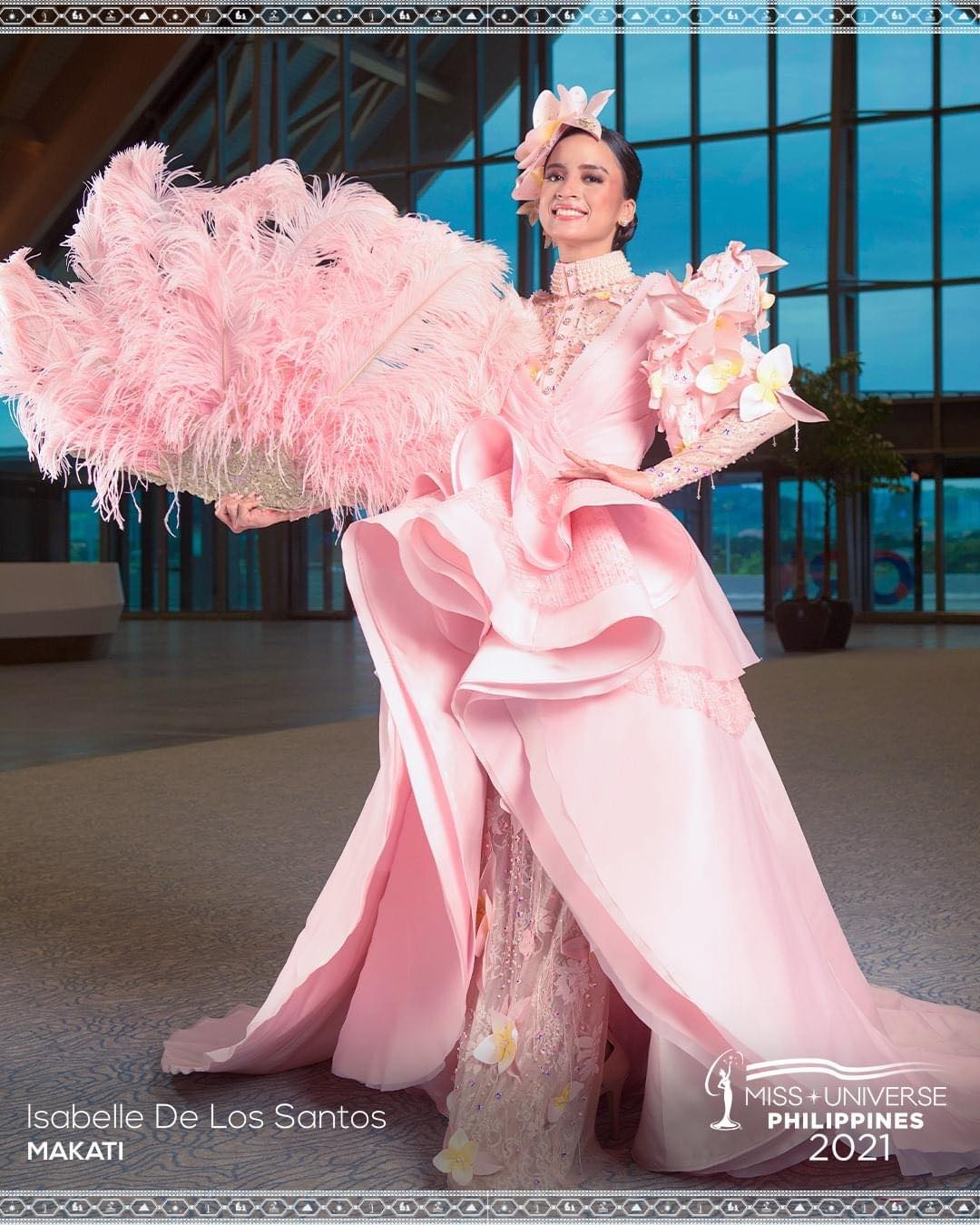 Isabelle looks divine in this pink ensemble inspired by Josephine Bracken and Audrey Hepburn’s Eliza Doolittle in My Fair Lady. Everything about this dress—from the huge fan made of ostrich feathers to the faux blooms for a headdress and appliquéd faux petals on the costume’s sleeves and inner dress—looks and smells, albeit virtually, good. 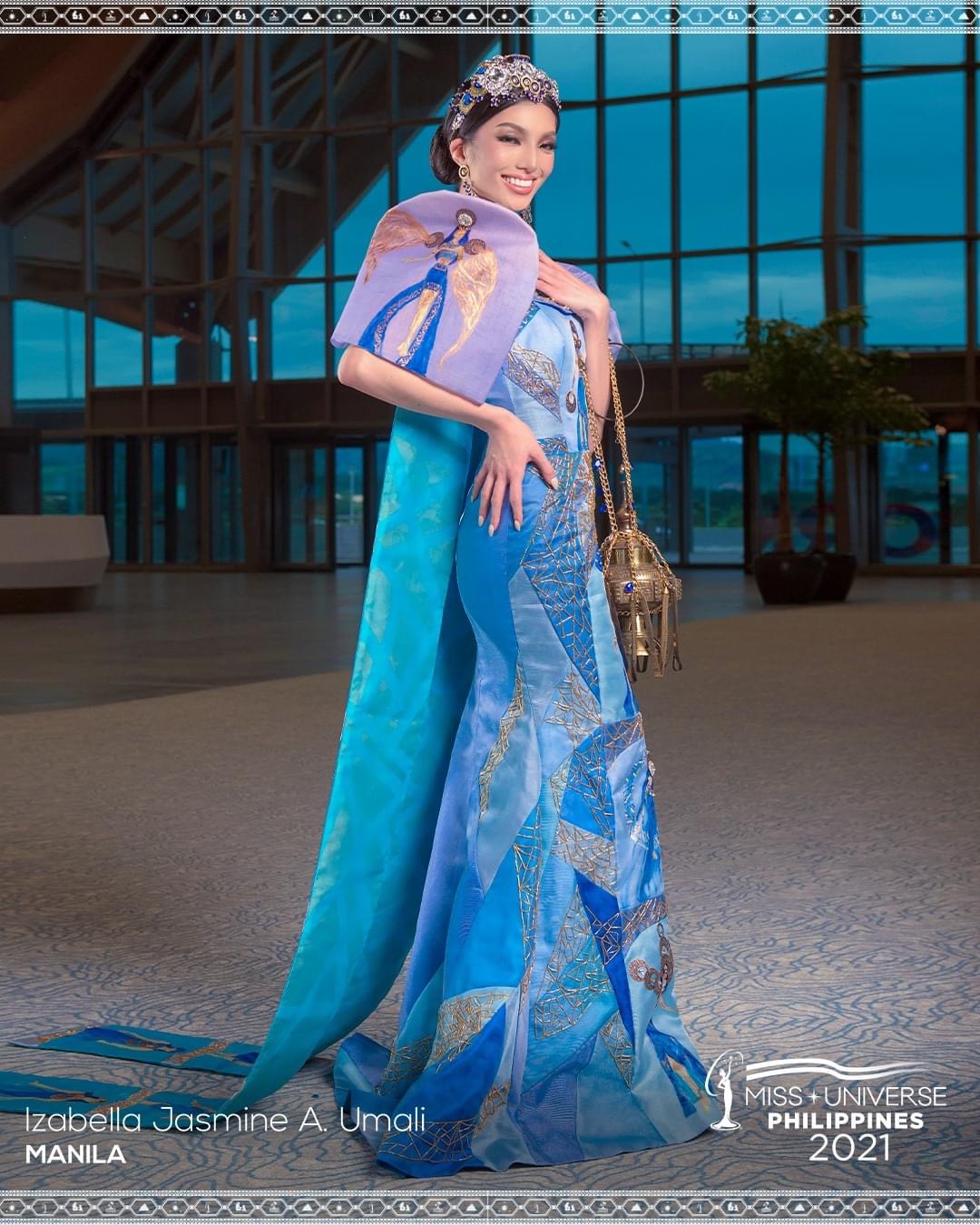 The workmanship that went behind this vintage-inspired terno is perhaps second to none. June painstakingly pieced together irregular cuts of fabrics in various jewel tones to form a figure-flattering dress for Izabella. For good measure, the designer beaded portions of the dress and further embellished it with hand-painted human figures on its sleeves and train. 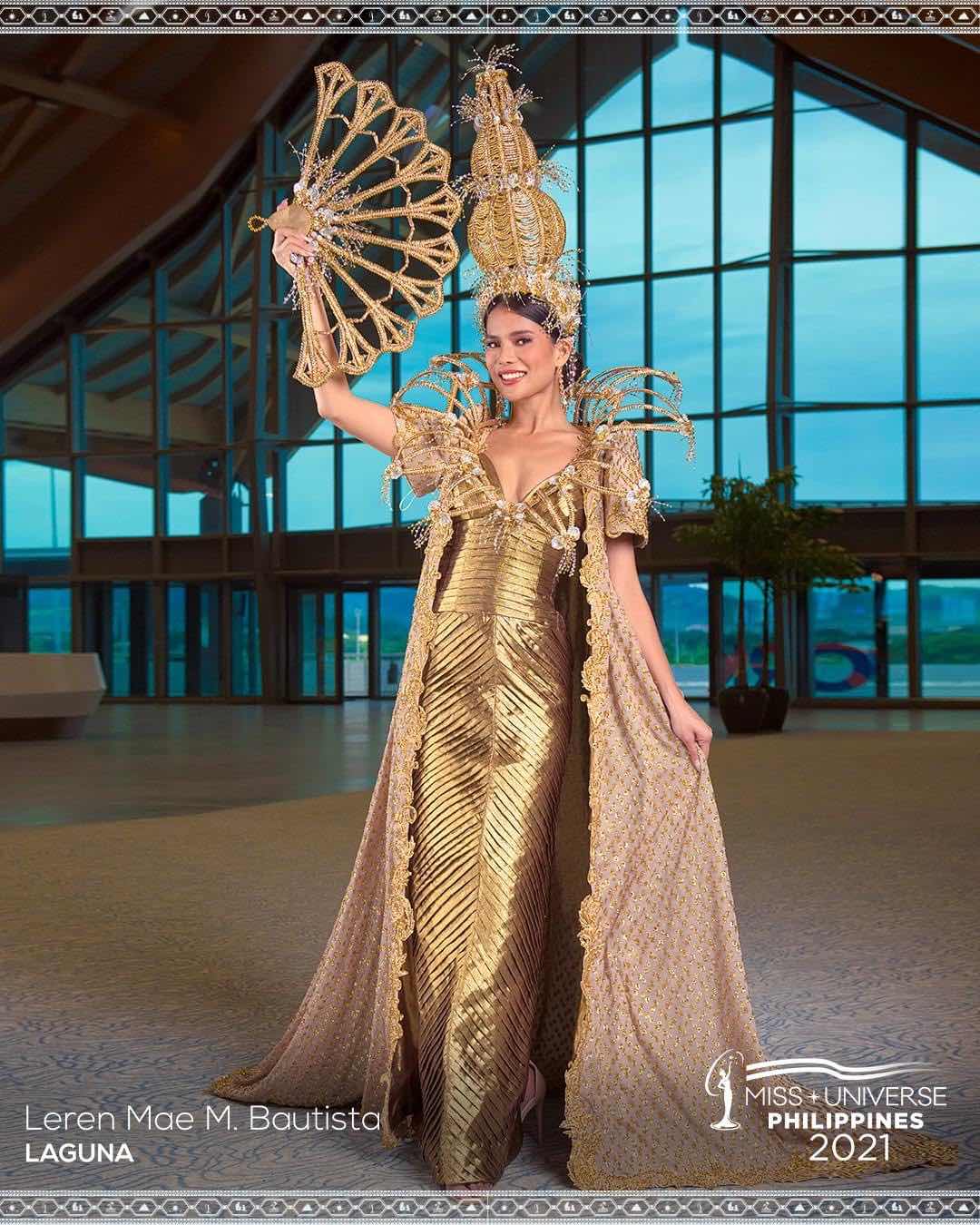 Golden girl Leren Mae looks like an earth goddess in this metallic terno with matching embroidered cape. A fan, headdress and framed neckline piece made of similar materials and treatments further add to the costume’s visual flourish. 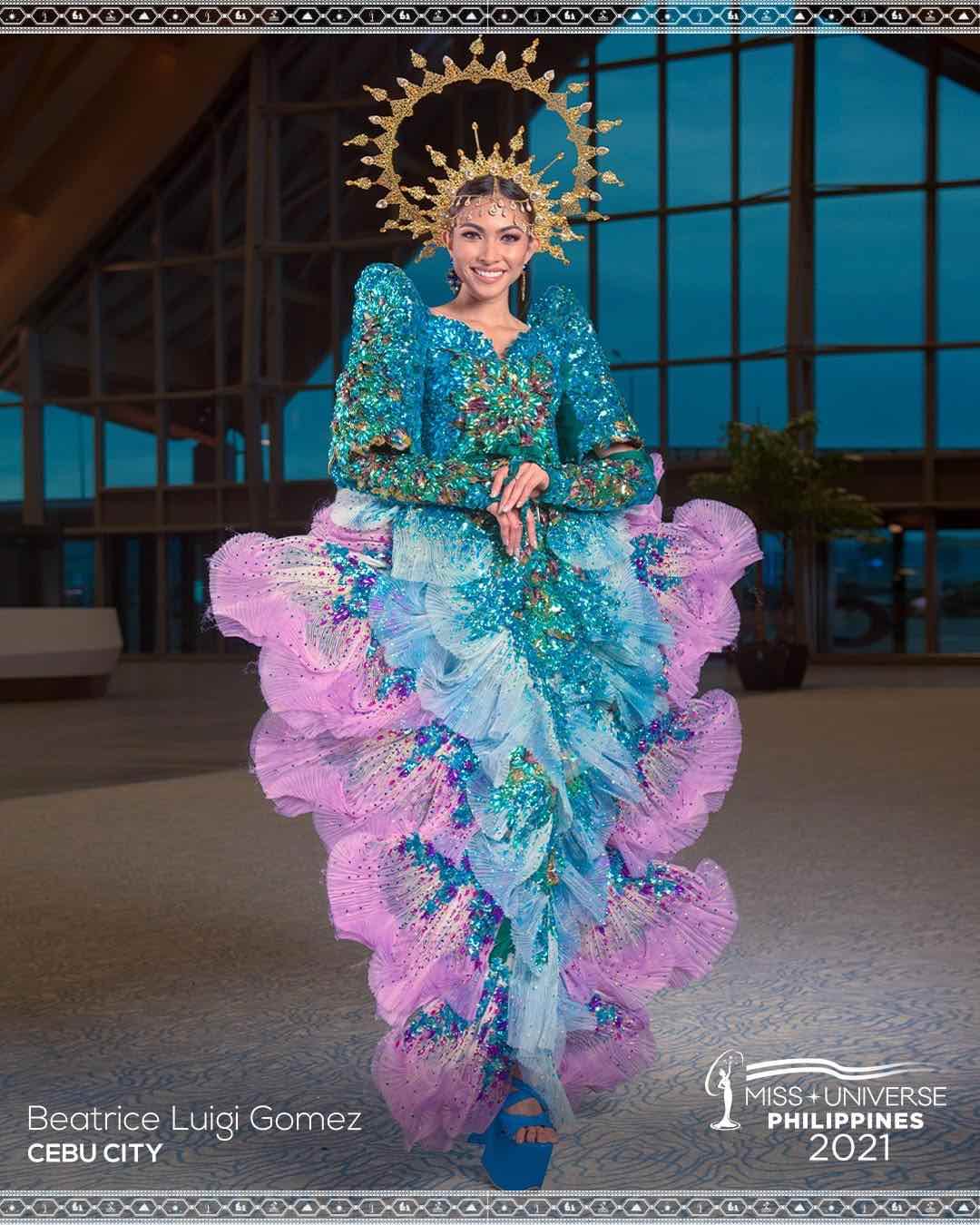 Part Filipiniana, part carnival queen and a whole lot of fun, Beatrice’s embroidered and tiered terno evokes the Queen City’s vibrancy, changing colors and its citizens’ zest for life. To give justice to the pink-and-aqua look, she gamely danced in front of the cameras, which was no easy feat, considering that Beatrice sported a stratospheric pair of blue platforms. Yikes! 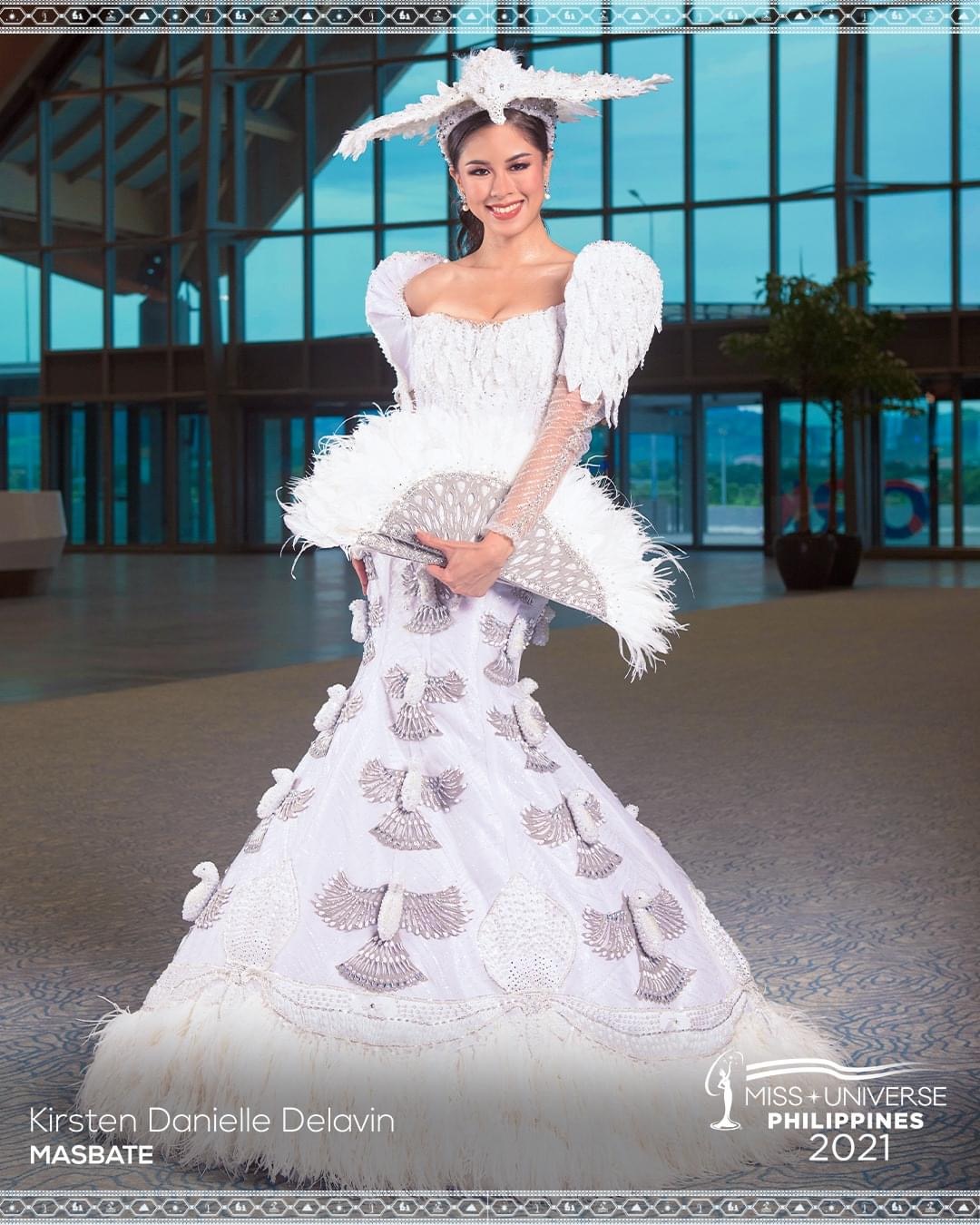 Immaculate white terno with classic serpentine silhouette, check; avian inspiration, from the bird headdress, plumose sleeves and bodice to the semi-beaded skirt, check; celebrity wearer with a sweet and unflappable disposition, check. Yes, this dress and its owner tick all the right boxes! 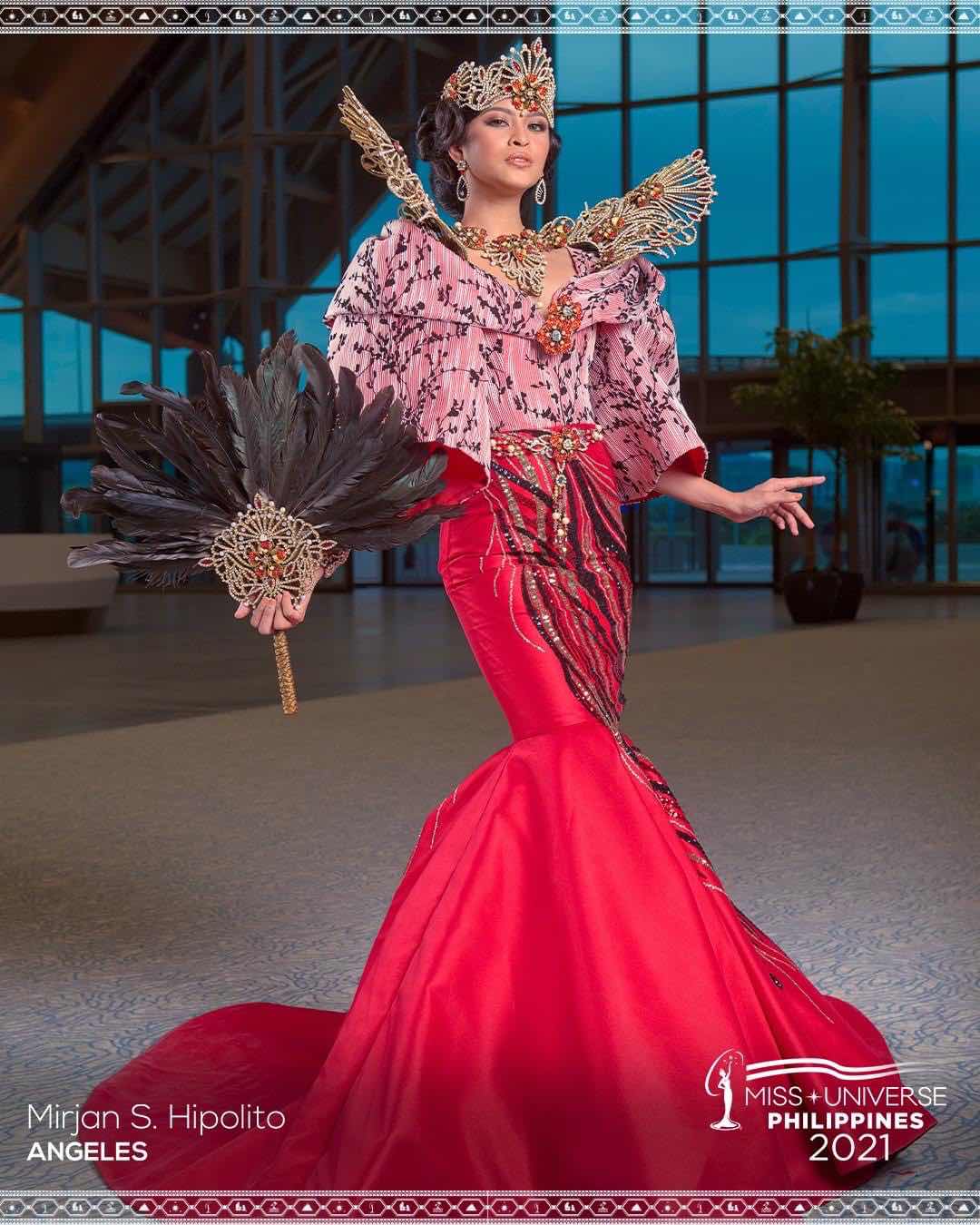 She looks like a vision straight out of the Art Deco period in a stylized Maria Clara ensemble with printed pink top and red embellished skirt. The fan, headdress and winged accessory unmistakably hark back to the 1920s, giving the entire look a “Great Gatsby” feel. 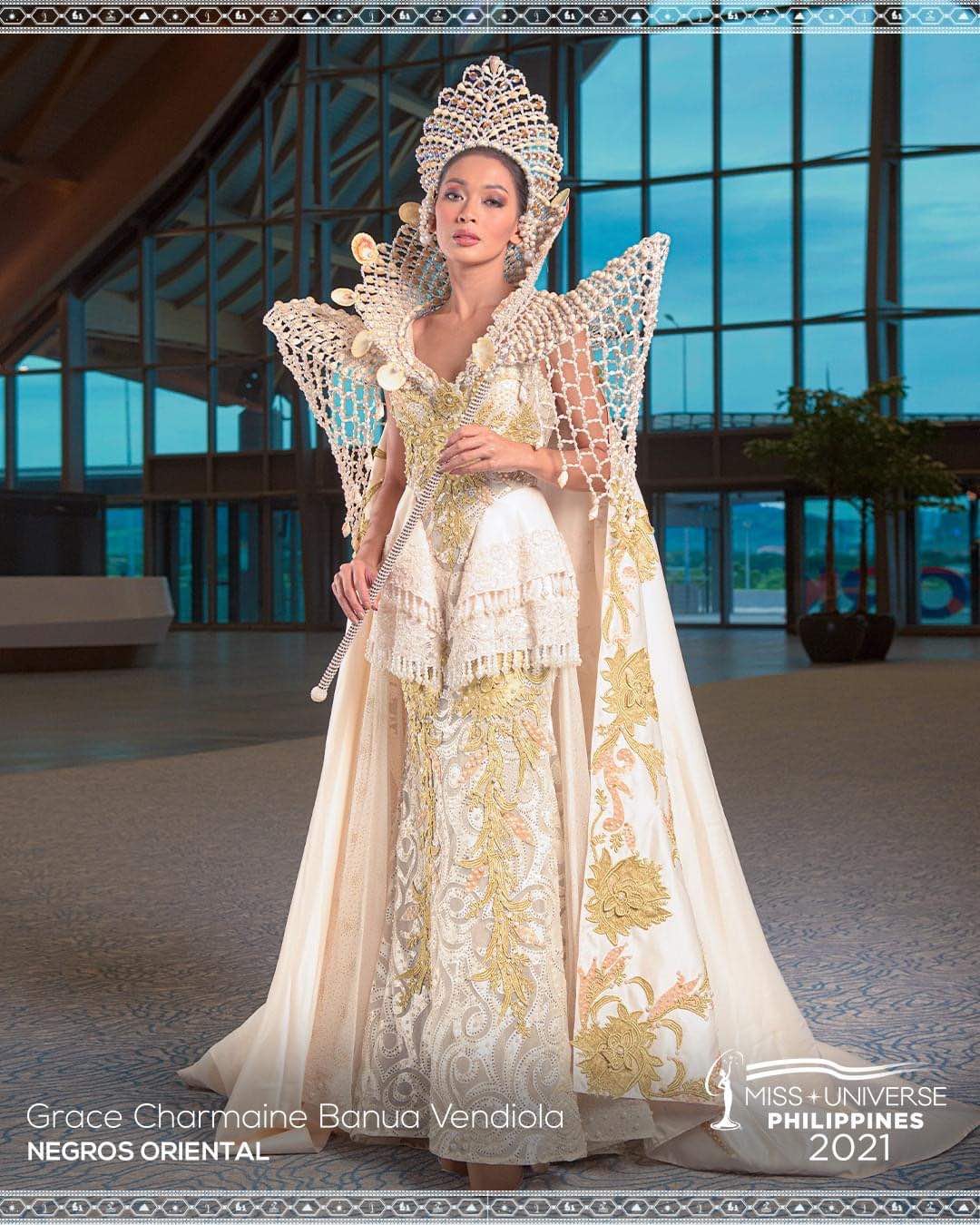 How many times have we seen a beauty queen and her designer channel inspirations from the sea, particularly such elements as pearls and shells, in the past? A lot! What’s amazing about Grace and Ryan’s collaboration is their ability to give such an overused peg as “Pearl of the Orient Seas” a fresh, interesting and dignified take. The designer took it one notch further by fashioning of-the-period accessories made of actual shells and rice pearls. 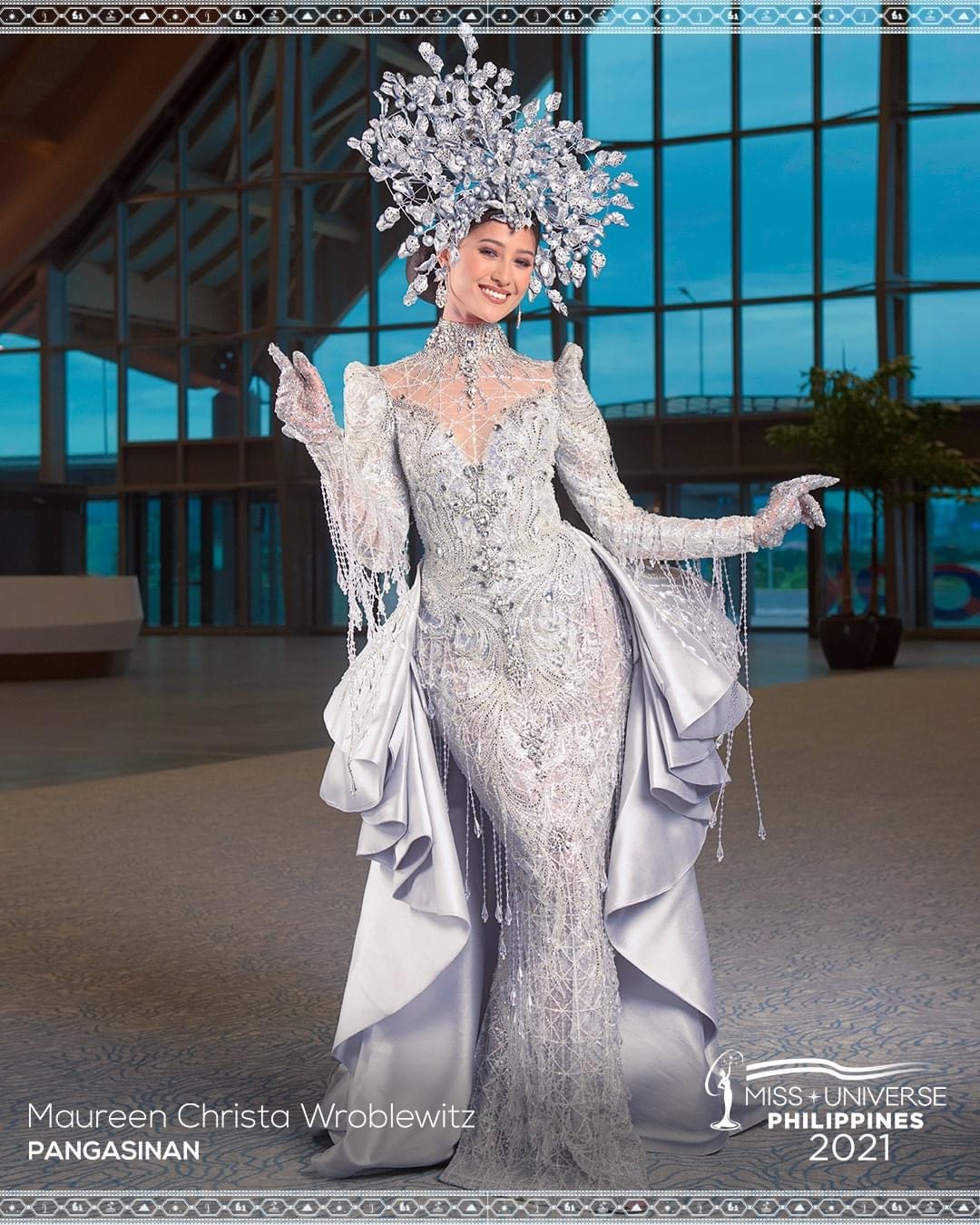 Take away the Muslim-inspired silver headdress from this beaded and western-looking silver gown with built-in bustle, and the costume will still end up looking smashing. Let one of the country’s top models wear both gown and headdress, and the look becomes a guaranteed winner.

Woman spends $60,000 on surgery to look like Kim Kardashian: 'I don't regret it'