Dano Tingcungco can cut things down to size, two ways.

One, as a broadcast journalist, by distilling a story down to a bite-sized nugget that a television audience can easily consume. And another, as a shoemaker, by cutting down strips of leather into shoes that are equal parts utility and poetry.

“It took me a while to accept the kind of life that I have,” Tingcungco told PhilSTAR L!fe.

“These two lives are equally demanding,” he added. “But equally no compromise.”

For Tingcungco, sustaining the twin disciplines is a necessity and a choice. He remembered being told before to just focus on one, to which he replied, “But what if I am both?”

There's also a certain “high” the spirit of creation provides, he said, whether drafting a news script or skiving some leather.

Hailing from the country’s shoemaking capital Marikina, the 36-year-old Tingcungco shared that he’s the lone third-generation shoemaker in his family following in the footsteps of his grandparents and parents who started their business in the ‘60s.

Tingcungco says he grew up with the smell of rugby and contact cement, the banging of hammers, and the whirring of sanding machines in the workshop. He learned the craft all by his lonesome during his adolescent years. But never did he think about becoming a sapatero like his parents and grandparents.

“I thought, ‘There must be something else that I can do aside from shoemaking,’” he said.

In 2002, Tingcungco entered the University of the Philippines Diliman as a linguistics major. He transferred to journalism later, deeming the program a better avenue to harness his love of writing.

Somewhere along the way as a journalist, his shoemaking ways came and pulled him back anew.

“It just pulls you back,” Tingcungco said. “It’s part of my heritage and it’s something I cannot deny.”

One of the early ways his heritage reared its head was when his friends were getting married. With the wedding registry items being expensive, he said he would just ask the bride and groom if he could make shoes for them instead. Shortly after, he started to take up the craft seriously.

“I kind of got the hang of it,” he said. “I never really imagined myself to be doing this at my age at this time.”

The brand’s name, which means “once” in English, was inspired by the transitory nature of things. But Tingcungco noted that even with the impermanence of life, it has aspects meant to last long enough to have a significant impact.

It just pulls you back. It’s part of my heritage and it’s something I cannot deny.

Tingcungco said they considered several names other than Minsan, but “none of them really stuck or felt right.” Until one random moment of casually browsing on his smartphone, he came across the word and it “just grew” on him.

“It started to make sense the more we held on to that term,” he said. “It has that emotional touchpoint.”

Minsan’s footwear is called Pavilion, inspired by the 1970 Philippine Pavilion in Osaka in Japan designed by National Artist for Architecture Leandro Locsin.

As for its shape and form, Pavilion is based on the sapatilyas of the 1930s, as well as the tsinelas de alfombra that's been popular in Pateros.

In terms of design, Pavilion is characterized by a distinct patchwork inspired by National Artist for Visual Arts Hernando Ocampo's "Cantata" (1971) and "Abstraction 148" (1978). Tingcungco said the patterns they make are always exclusive to a client and cannot be replicated for another one’s use.

But above all, Tingcungco said the patchwork design also has a dimension of sustainability as much of the leather they use are pinagtabasan or castoffs, and they must make the most out of a piece that won't be enough even for a coin purse.

“We’re not in the business of throwing anything away,” he said. “Not just because leather is rare and expensive but also because it's a sign of respect to the animal.”

Tingcungco wearing a journalist hat and a sapatero hat required a lot of introspection and overcoming one's demons.

“You take those (problems) and make them your friends,” he said. “You allow them to tug you out instead of them breaking you.”

Some of these challenges include starting again after two typhoons affected his workshop in Marikina. Tropical Storm Ondoy in 2009 was especially traumatic for his family, and again in 2020 during Typhoon Ulysses.

We’re not in the business of throwing anything away. Not just because leather is rare and expensive but also because it's a sign of respect to the animal.

“Somehow, you're forced to go back to square one. Maraming gamit na nasisira,” he said.

#LifeLokal: Renegade Folk, a champion of soles and the local artisans’ soul

Tingcungco said conceptualizing Minsan took over a year. But his being the consistent, full-fledged shoemaker that he is right now took at least a decade.

“The whole process, the full circle of it, is really necessary for me to be able to unveil Minsan,” he noted, acknowledging that it took “so much pain” to get to wherever he is right now.

“It's not the easiest way because there's no structure to it,” he said, noting that his self-training is all about putting it down to experience. As an item can only be done properly once, he noted, a small mistake would spell an entire makeover.

“In wallets, for instance, if you cut too short, your allowances are too much, or you didn't skive properly, you're going to end up with a wallet that breaks when you put a card in it or one that's too bulky, too bunched up.”

The whole process, the full circle of it, is really necessary for me to be able to unveil Minsan.

Tingcungco said there are points while “refining the DNA” of Minsan that he just wants to throw in the towel.

“You cannot really ask someone else to do things for you,” Tincungco said. “Like the river, life flows and it doesn't stop. You don't try to stop the flow of water.”

Honesty with clients and self

Tingcungco also cited the influence of the late Brian Tenorio, Filipino-American shoe designer and staunch advocate of LGBTQ+ rights. Calling him “big brother,” Tingcungco said Tenorio always talked about honesty as an essential work ethic. It has been his guiding principle ever since.

“My work as a reporter requires me to be contextually and factually accurate. You need to make sure your integrity is never compromised,” he said. “In a way, as a shoemaker, you need to make sure of that as well,” as he cannot afford to simply do a sales pitch and must assure clients of getting the best customer service possible.

Like the river, life flows and it doesn't stop. You don't try to stop the flow of water.

“The shoe ends up as an object that can be worn, tried on, but its development has to come from deep here,” he said, pointing to his heart.

Tingcungco also said that coming out as a gay man helped a lot.

“I used to think that it might pose a problem, but it actually helped people warm up to me,” he said, while noting that he’d rather be recognized for his work rather than his sexual orientation and gender identity expression.

As COVID-19 cases have been dwindling and travel restrictions are easing up, Tingcungco is hoping for more prospective clients.

Yet, he said Minsan, which is based at concept store Guava Sketches in Greenbelt, doesn’t do hard advertising, as he wants to make the process “as organic as possible.”

“We're just letting it flow. There's more emotional investment when people just discover you and give them time to really know and understand you, find parts of themselves that resonate with the brand,” he said, stressing that it becomes “more honest” that way.

Tingcungco said one of his goals years from now is for his clientele to return and have their Pavilions resoled or restored.

Minsan is also planning to explore other leather goods “soon.” In fact, they’ve already been producing coin purses called Hakaw, as they resemble the shrimp dumpling of the same name. 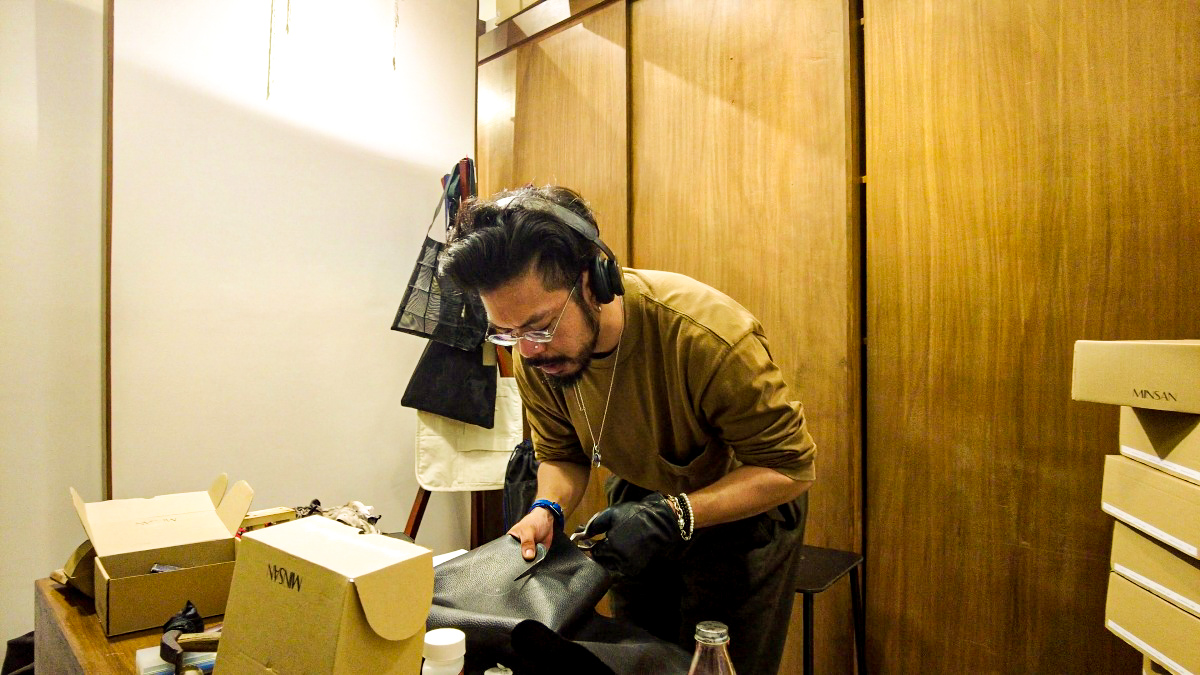 Tingcungco demonstrates how Minsan's Hakaw coin purse is made, beginning with cutting the leather. But before anything else, he says he can only work while his trusty headphones are on. 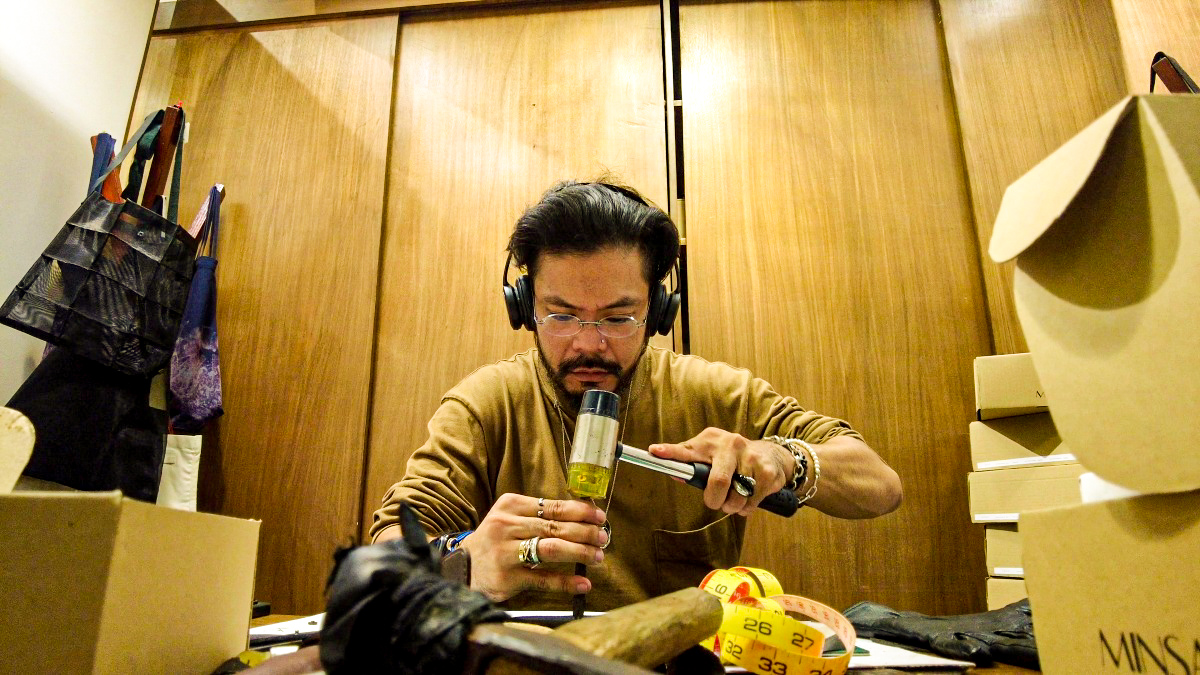 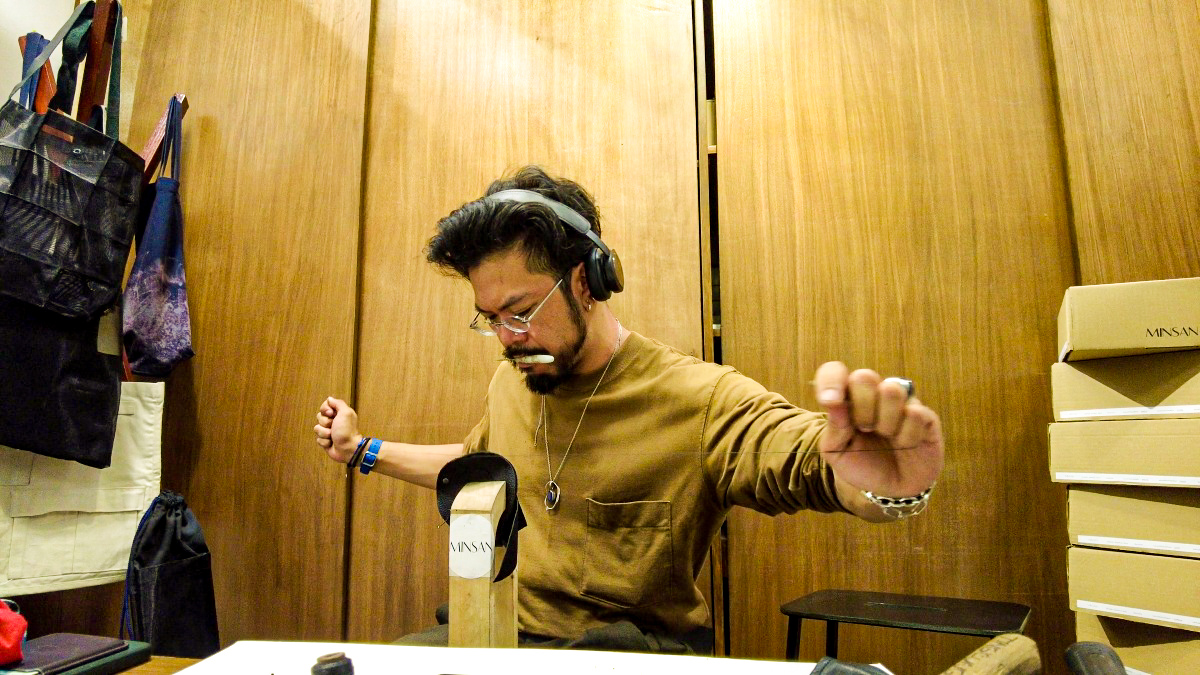 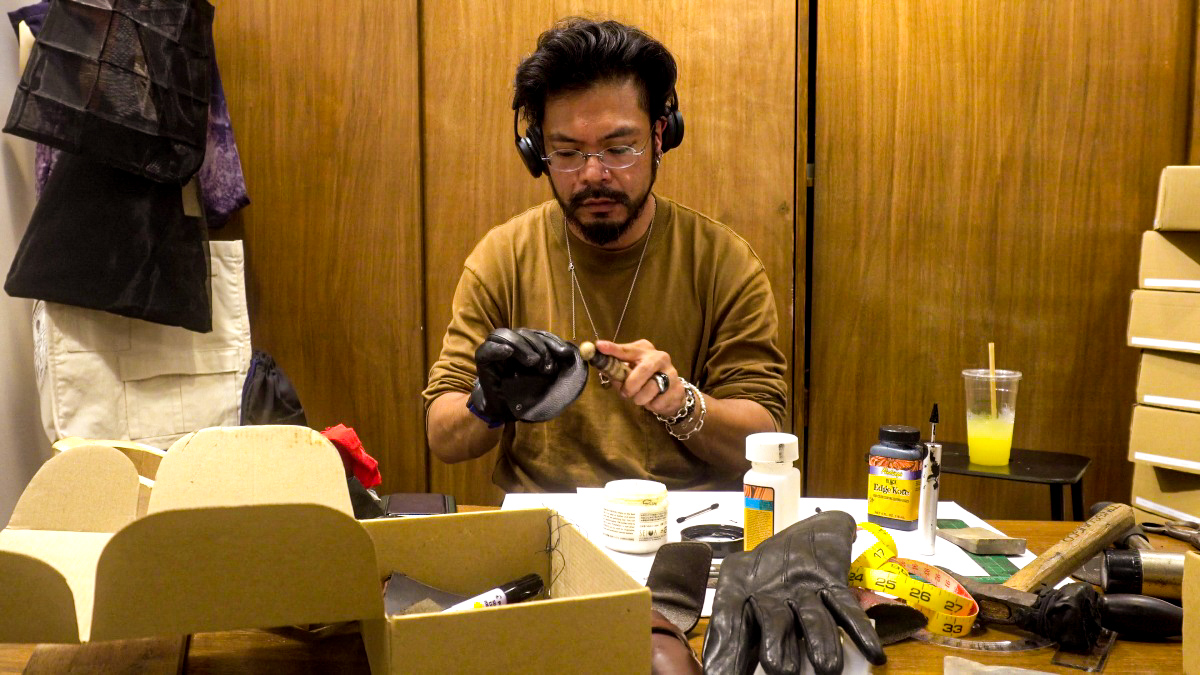 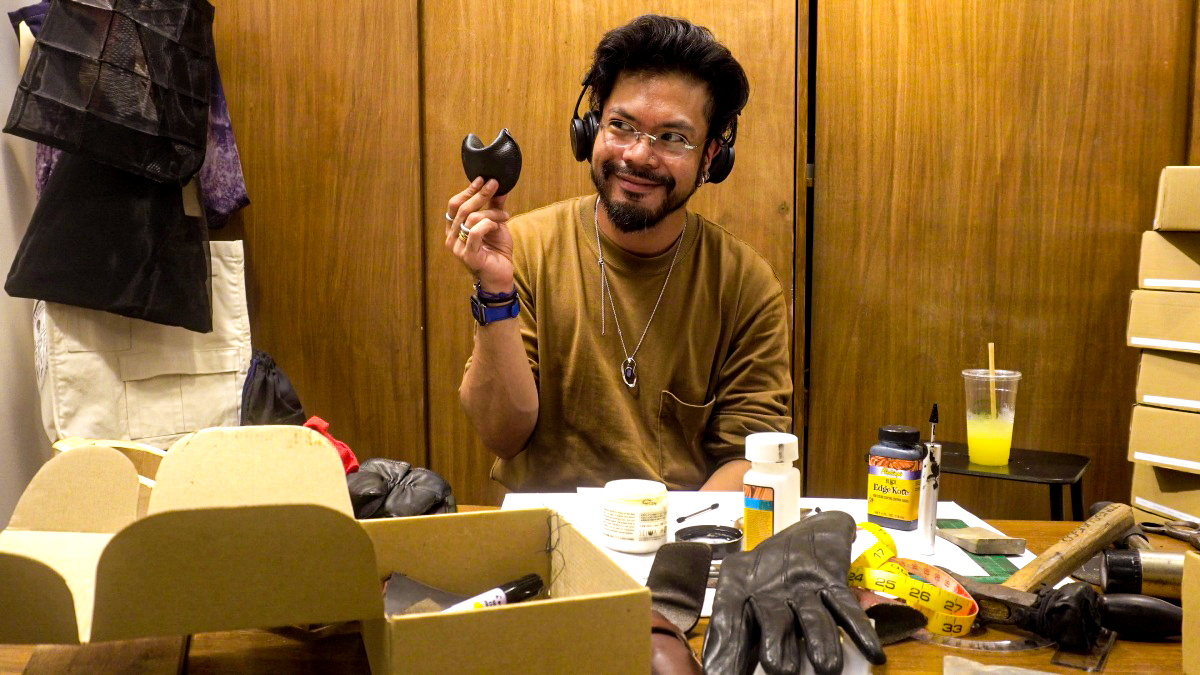 Tingcungco does a wacky pose showcasing the fruit of his labor. 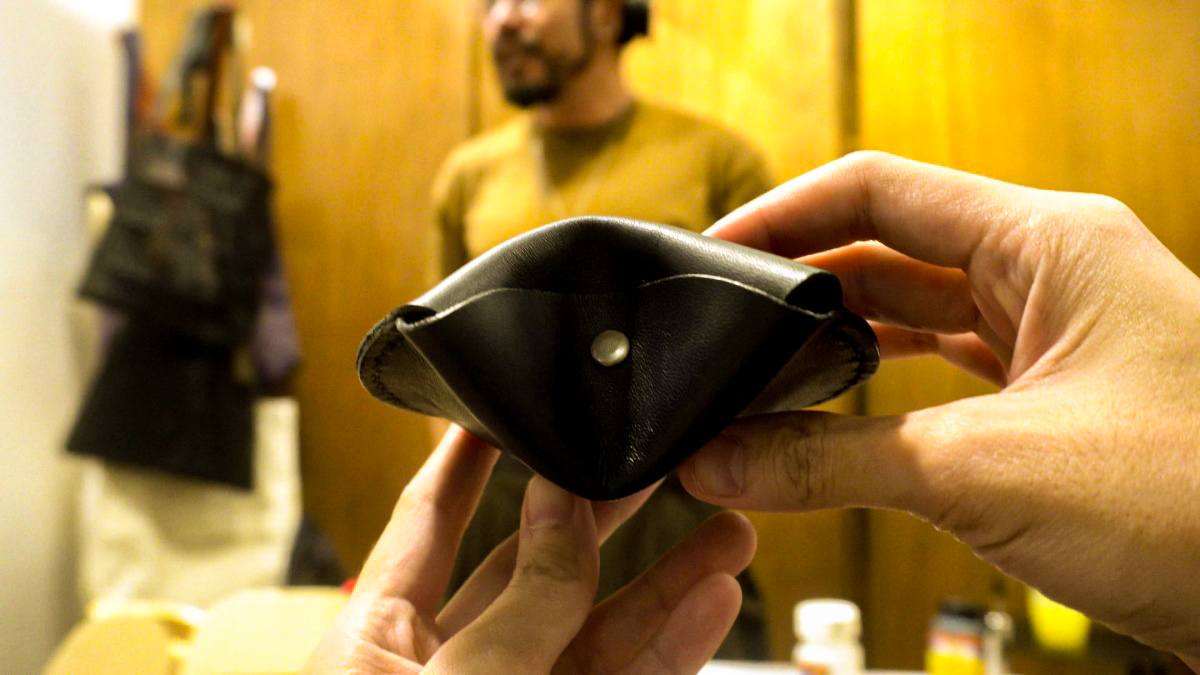 The finished Hakaw ready for use.

Tingcungco demonstrates how Minsan's Hakaw coin purse is made, beginning with cutting the leather. But before anything else, he says he can only work while his trusty headphones are on.

Tingcungco does a wacky pose showcasing the fruit of his labor.

The finished Hakaw ready for use.

Though the hours and the work pile on, often at the expense of a much-needed vacation, Tingcungco said he wouldn't have it any other way.

“It is exhausting. But when I go to my room, lie in my bed, before I shut my eyes and call it a day, I’d tell myself, ‘I'm doing exactly what I love to do.’”

Planning to study in top US universities? Here are the secrets to increase your chances of admission

'Shot puno': 'Gin bilog' given as souvenir in baptism reception in Rizal