For those in the LGBTQ+ community, family’s love, acceptance and support are powerful things that would make a lot of difference in their journey—from coming out to sharing their story to the world.

According to the LGBTQ organization PFLAG, “Family support makes a transformative difference in the lives of people who come out as lesbian, gay, bisexual, transgender or queer.”

“When parents and families share their stories—coming out in support of their LGBTQ children and loved ones—they not only bolster them, but embolden others to do the same,” PFLAG said in its website.

In celebration of Father’s Day and Pride Month, here are amazing fathers who give unwavering loud and proud support to their LGBTQ+ children.

Many praised Ian Veneracion on how he supported his daughter, Deirdre (Dids), when she first came out as lesbian.

During a guesting on ABS-CBN’s Magandang Buhay, the 46-year-old actor and singer revealed that Dids was 16 years old when she approached him, teary eyed, “I like girls.” To lighten up the situation a bit, Ian replied, “Me too.”

At that moment, as Dids was surprised that Ian already knew about her sexual orientation, he told her, “Don’t be ever apologetic about it, not even to me. You can be whoever you want to be and I have full support.”

What many do not know is that it was, in fact, an answered prayer for the 47-year-old dad. In Karen Davila's vlog in June 4, 2022, Ian admitted to the broadcaster that he was "actually praying" for Dids, 20,  to be part of the LGBTQ+ community.

He said that his wife has since been supportive of their daughter's identity as well. "Sabi lang ng wife ko, 'Masaya ako kung saan ka masaya,'" Ian remarked.

With the support he gives to his daughter, Ian has become an ally to the LGBTQ+ community. In 2019, he attended a Pinoy Pride event in Calgary and posted it on Instagram. “On this joyous occasion, I’m happy to see everyone celebrating kindness through human respect. This should not be limited to annual events but practiced every day, everywhere.”

Former Miami Heat guard Dwyane Wade sends his all-out support to his 14-year-old daughter Zaya, who identifies as transgender. He is also a vocal activist in the LGBTQ+ community together with his wife Gabrielle Union with their Wade Family Foundation.

Zaya was 12 years old when she told her father and stepmother Union that she wanted to live her truth, told them that she laid out her preferred pronouns (she/her) and she wanted to be called Zaya.

Dwyane told Good Morning America that he and his wife took Zaya’s coming out as an opportunity to educate themselves and embrace their daughter’s gender identity to make sure that they gave her the opportunity to be her best self.

“It was a process for us to sit down with our daughter and find out what she likes and who she is,” he said.

Today, Dwyane sees his daughter as someone who provides inspiration to many black transgender youth. “When I look at Zaya, I get hope,” Dwyane told People.

For Zaya’s 14th birthday recently, Dwyane posted on Instagram a photo of them with the caption, “I’m obsessed with your happiness! Happy 14th birthday @zayawade.”

Former actor Leandro Muñoz, who is now based in San Francisco, California, shared in an interview with Paolo Contis in the online show Just In how his transgender son, Frankie, opened up about his gender identity.

Leandro said Frankie, who was then 16 years old, went up to him crying and saying he needed help because he was attracted to the same sex.

“There’s nothing wrong with you. Is that what makes you happy?” Leandro asked Frankie, who answered, “Yeah, that’s what makes me happy, I feel like a boy. I am a man.”

Leandro told Frankie, “Then go with what you feel.”

And his advice for parents, “Kung mayroon kayong anak na trying to come out, give a hundred-percent support.”

TNT Tropang Giga coach Chot Reyes is protective of his four children, not even trolls can succeed in tearing that father’s love apart.

In 2012 someone asked him on Twitter, “Anak mo yan Coach Chot? Bakit mukhang bakla?” The person was referring to his son Mosh.

Reyes’ reply was nothing short of powerful. “Yes, he’s gay & I’m very proud of him.”

Meanwhile, in 2013, when the topic of “is PBA ready to accept gay players” was brought up on social media, then a coach for Gilas Pilipinas, Reyes said in an interview that he had no problem if there would be gay players in the league.

“I have a gay son (Mosh) so I have absolutely no problem with any player coming out in the PBA or elsewhere,” he said.

Actor and comedian Marlon Wayans celebrated on social media his then 19-year-old daughter Amai coming out during Pride Month in 2019.

“Happy pride to my pride and joy. I wouldn’t change one effing thing about you. Love you to the moon around the sun, through the galaxies and back again,” Wayans penned for Amai.

While many showed support to Wayans, there were others who criticized his post saying that his daughter is not old enough to understand being gay. Wayans did not back down.

“She’s 19. She is who she is until or until she don’t choose different. Love her for her not what I want her to be,” he responded to one of the commenters.

He said in another comment that he thought of erasing comments that trolls left in his post but he thought that the world should see that kind of “ignorance still exists.”

He said, “Objective without obstacles is a worthless triumph. We all will someday get to unconditional love. Because of my daughter, I am one step closer. I am not God, I don’t judge, I just LOVE. And still pray for the haters because I refuse to judge them too. I just love.”

Payton wrote, “This is my kid. One of the most happy, well-adjusted individuals I’ve ever known.”

He shared that Karter was born female but has always identified as a boy. “He (Karter) thought it would be cool if I announced it on social media.”

Payton let Karter know that there will be a lot of supporters but there will also be those who would be harsh. Karter just said, “Yeah, I know about trolls, daddy. I can handle trolls.”

“Man, there is nothing more beautiful than watching your child feel the joy of exploring what it means to be true to themselves,” Payton said.

He concluded, “This is his journey and I am here for it. I hope you all have the opportunity to feel the unquenchable love that I am feeling right now." 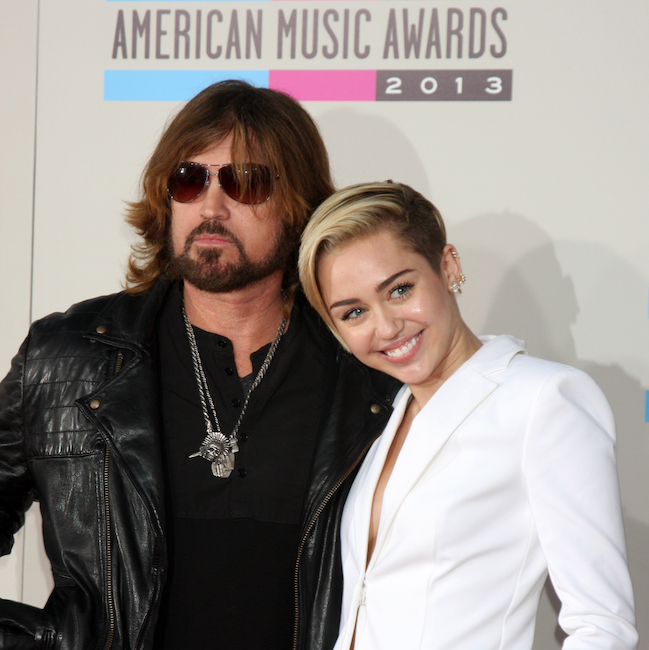 In case you haven't heard, country music icon Billy Ray Cyrus is also a proud father to her daughter Miley, who once identified herself as pansexual.

The actress' confession happened in an interview with Elle Magazine back in 2015. She said, "I'm very open about it — I'm pansexual. But I'm not in a relationship. I'm 22, I'm going on dates, but I change my style every two weeks, let alone who I'm with. I don't relate to what people have made men and women into."

It made Miley the subject of criticism, but father Billy Ray stood up in her defense during an interview with E! Online later that year. The Achy Breaky Heart star revealed that no matter what her daughter chooses in life, she always has her parent's back.

"We've always been very open-minded. Listen, it's all about love and light," Billy Ray said. "Forget the negativity and the haters. She's rocking and rolling and having a good time."

"Even when she was a little girl, we told her, 'Hey, baby, do what you do and have fun doing it. Do it because you love it, not because you have to,'" he continued. "Seeing her happy is the greatest thing ever."

Like many fathers who are also athletes, NBA legend Magic Johnson initially wanted his son EJ to take up his passion for sports. "When you grow up in team sports, you're thinking, 'Is he gonna play sports?'" he recalled during an interview with Variety in April 2022.

That is why the former LA Lakers point guard can't help but cry out, "What are you doing?" when he noticed EJ liking dolls and playing dress-up.

It changed eventually, especially when his 30-year-old son, also known as Cookie, came out publicly in 2013. Johnson revealed this four years later in an interview with Ellen DeGeneres.

He said, "It's about loving them no matter who they are, what they decide to do. And when my son came out, I was so happy for him and happy for us as parents. We love him. EJ is amazing."

"There are so many people trying to discriminate against them so they need you to support them. 'Cause if you don't support them, who's gonna support them and love them?" he added.

Johnson and his family have been admired by people for their support for the community, and the sports and business enthusiast still holds true to his convictions up to this day.

"As I grew older, as my wife talked to me, I couldn't [judge EJ]. I had to accept who he was and who he wanted to be," he said in his recent interview with Variety. "He actually helped me get there. Because he was so proud. Cookie said, 'Look in the mirror.' I said, 'You're right.' Because I'm proud of who I am. And he got it from me."

Renowned gospel singer Robert Stafford used to believe that homosexuality is taboo. His son, rapper Lil Nas X, revealed in past interviews that it changed when he came out to his father in 2019.

Stafford attested to this when he lauded the viral rapper after he came out publicly through his song c7osurereleased in June of that year.

“Very creative video. I got through it [face with tears of joy emojis]. Congratulations, Live life on your terms. Very PROUD of you [flexed biceps emojis],” Stafford tweeted about the song.

The gospel musician also defended his son against rapper Boosie Badazz, who made homophobic remarks against his son, telling him to kill himself.

Robert clapped back at Boosie, with an Instagram Story that reads, “How the hell you’re a gangsta rapper promoting drugs, gun violence, degrading women, and getting high every video talking about you’re for the kids.”

“Man sit your old man looking ass down. The game has past you,” the aggrieved father continued. “We real Bankhead over here. Not like the guy who claims it.”

Philippine labor leader and 2022 presidential aspirant Leody De Guzman has great respect not only for the marginalized sector of the country but its LGBTQ+ community as well.

This is evident in his acceptance and love for his son Dexter, who admitted to being part of the community in his interview with TV host Boy Abunda in March of that year.

Dexter told Abunda that it wasn't difficult for him to show his true colors to his family, especially his father, as he never experienced discrimination from them.

He always felt that his family respects him, so much so that he didn't even have to come out to them as gay.

Kids aren't too young to learn about being LGBTQ+