“There are a lot of distractions, a lot of bashers or backlash but at the end of the day, when you practice self love, you get to know the right weapon in order for you to win in life.”

Miss Universe Philippines 2020 Rabiya Mateo is ready to take on the universe.

Her first time to join a national beauty pageant, Mateo was not considered a frontrunner by many. However, she was on the radar of pageant experts who predicted that she would at least be part of the Top 5. Mateo is represented by Aces & Queens camp, which has produced international title holders including Miss World 2013 Megan Young and Miss Universe 2015 Pia Wurtzbach.

Mateo is reportedly the second Ilongga to represent the Philippines in Miss Universe. The first one was Louise Aurelio Vail of Jaro, Iloilo in 1965, who landed in the Top 15 of the pageant held in Miami, Florida.

The 23-year-old stunner from Balasan, Iloilo is of Filipino and Indian descent. She was raised by her mother Christine, a single mom who taught her the value of forgiveness and hope. Mateo shared during the MUP 2020 preliminary interviews at the Baguio Country Club that she learned from her mother, an Ilongga, to always forgive people.

Mateo also openly spoke about her father leaving their family when she was younger and they have experienced a “really poor life.” Through this situation, Mateo empowered herself through education to be able to get herself a job and eventually help the family. She believes that having an education will allow her to rise above hard times.

During the pageant’s Top 16 Q&A, Mateo spoke about her love for education and how it helped her to live a comfortable life now that she and her family deserves.

As an advocate, Mateo works with the “Feed Me and I Read You” program, which benefits the students of Feliciana Java Kelly Elementary School in Mandurriao, Iloilo City. The program aims to conquer hunger and improve the learning capacity of a child. In her advocacy video for the pageant, she said, “It has been my dream that tomorrow, education shouldn’t be just a privilege for some but the right of every child because knowledge is and always will be power.”

‘A symbol of hope’

The COVID-19 pandemic has spared no one and nothing, including one of the much-awaited events of the year, the staging of the Miss Universe Philippines 2020. The pageant was initially set for May 3 but because of the country’s strict community quarantines still in effect, it was moved to June 14 and was postponed again.

Eventually, the “all-Pinoy” staging of the pageant (with Robby Carmona in charge of production) happened on Oct. 25, with no live audience but was shown on GMA-7 and streamed through Ring Light on Empire.ph for a fee.

Among the health and safety protocols of the pageant was that candidates were required to do their own makeup and hairstyling, guided by mentors Nix Soriano and Mark Rosales. The organizers also made sure that only 10 girls were allowed at one place at a time.

As the pandemic continues to usher the country and the rest of the world to more uncertainty, many ask if pageants are still relevant at this time. In the Top 5 Q&A during the MUP 2020 finale, candidates were asked: “Where do pageants stand in this time of crisis?”

Rabiya articulated her winning answer, “As a candidate, I’m not just the face of Iloilo City but I am here carrying hope as a symbol of light in the darkest of times. And as of the moment, I want to help my community, I want to use my strength and make an impact. That is the essence of beauty pageants. It gives us the power to make a difference.”

While still in Iloilo before the pageant proper resumed, Mateo helped raise funds to buy PPE for health workers and groceries for pedicab drivers in her community. Out of her personal funds, she prepared meals for frontliners and helped repack donations for distribution to different barangays.

Mateo believes in the beauty and talent of Iloilo—the City of Love—and she makes sure to showcase them on the national level, and soon, internationally.

The gowns that she used for the preliminary rounds and the finale were creations of Iloilo-based fashion designer Jung Candelario. While her national costume, inspired by the Dinagyang Festival, was made by Tata Blas Pinuela, also from Iloilo.

In one of her interviews in the MUP prior to the finale, Mateo also shared that she wanted to showcase to the global community the indigenous fabric from Iloilo called hablon, a handwoven textile made from local fibers such as piña, abaca and cotton.

During the pageant’s Top 5 Q&A, Mateo paid tribute to the late senator Miriam Defensor-Santiago, who was from Iloilo City, when asked, “If you could create a paper currency with the image of any Filipino on it, dead or alive, who will it be and why?”

She responded, “If I will be given the chance, I will use the face of Miriam Defensor-Santiago. For those who don’t know, she was an Ilongga but what I admire about her is that she used her knowledge, her voice to serve the country. And I want to be somebody like her, somebody who puts her heart, her passion into action. And after all, she is the best President that we never had.”

Through her journey, Mateo sets her goal, works hard to achieve it and learns from stumbling blocks that life hurls at her. As a young woman, she believes in investing in one‘s self first, which would allow one to function at his or her best and eventually fulfill one’s purpose. 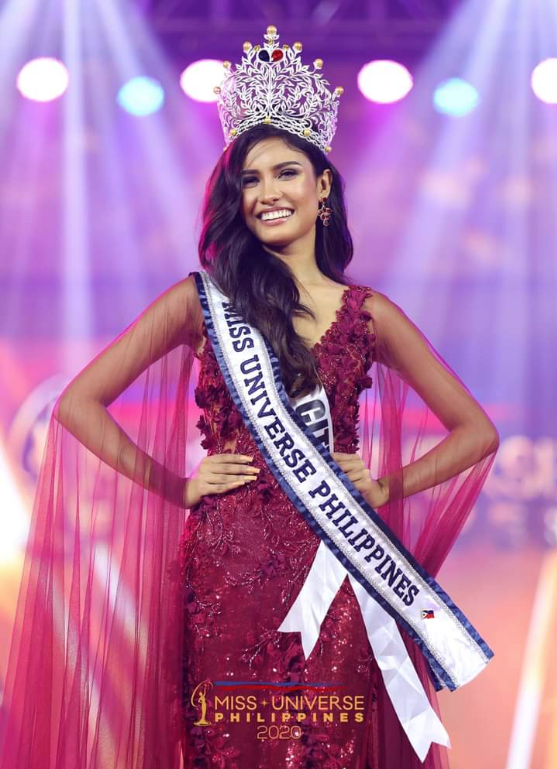 “You need to invest in yourself. As of this moment, there are a lot of distractions, a lot of bashers or backlash but at the end of the day, when you practice self love, you get to know the right weapon in order for you to win in life,” Mateo said in the pageant’s preliminary interview.

She added, “Right now, I feel like I am right enough to win the competition because I’ve done everything that I could and transform to become the phenomenal woman that I am.” And so she did.

With hard work, perseverance, love of life and family, a sense of hope and pride, Rabiya Mateo is ready to take on the universe.

FDCP screens for free MarJo, KathNiel films on Feb. 3. Here are other loveteams in the coming days.