I always used to think of Carbonara as drinking food. Back in the early ’90s, my friends and I would hang out at Penguin Café in the heart of Malate. I would order a spaghetti Carbonara made with processed cheese food, bacon and all-purpose cream. Not only was it tasty, but it would also serve to coat my stomach with the grease it needed to withstand drinking until 4 a.m.

Alternatively, we would order it for lunch to ease our hangover pains as we rehashed the stories from the night before and refreshed each other’s memories, narrating our collective sins and confirming that yes, in fact, a fun night was had by all.

As I got older and 4 a.m. nights became a thing of the past, my taste for Carbonara also waned. I thought of it as a gloppy, greasy mess best suited for younger palates and stronger stomachs. That all changed when I went to Rome and had my first authentic Carbonara. The sauce was marvelously creamy and unctuous, yet not a drop of cream was used, at least not by any self-respecting Roman restaurant.

These days, I think of Carbonara as more of a breakfast and brunch pasta than a drinking food, although it does hit the spot when I’ve had one too many glasses of wine at dinner the night before. It is bacon and eggs and pasta, after all, the Italian equivalent of a bacsilog.

If you can get your hands on it, use guanciale — Italian pork jowl bacon — as it lends an unequaled dimension of flavor. But if you can’t, go ahead and make it anyway with pancetta or even the best bacon you can find.

The traditional cheese for Carbonara is Pecorino-Romano, but I have used Parmigiano-Reggiano or a combination of both and gotten great results. Just steer clear of the pre-grated stuff. The dish has so few ingredients, so you may as well get the best quality stuff you can manage. A little goes a long way.

Boiling your pasta water is the hardest part of the recipe. Chop your bacon, beat your eggs and grate your cheese.  Pour yourself some coffee, juice, or maybe even a mimosa while you wait.

And when you’re done, hunker down with a bowl of this magical recovery food, savoring the deeply porky, crunchy bits; creamy, comforting noodles, and know that a great day lies ahead. 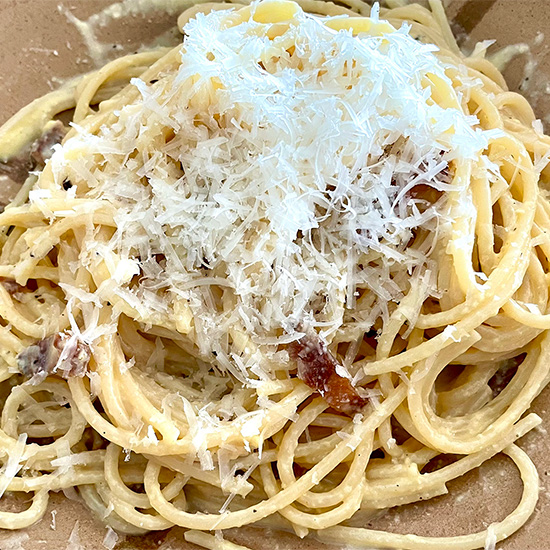 200 grams chopped guanciale (around a cup)

Bring a large pot of water to a boil and salt it. Put the oil and guanciale in a medium skillet over medium heat. Cook, stirring occasionally, until nicely browned, about 10 minutes. Take off the heat.

Cook the pasta in the boiling salted water. While the pasta is cooking, beat 3 eggs in a bowl. Stir in half a cup of the Pecorino.

When the pasta is still just slightly underdone, drain it and immediately toss it in the pan with the guanciale. Add the egg and cheese mixture to the pasta, continuing to toss the pasta vigorously. I like to do this slowly at first, to make sure that the egg mixture doesn’t start to scramble.

Add some pasta water and continue to toss until all the ingredients emulsify into a creamy sauce that coats the pasta.

Add plenty of black pepper, more cheese to taste, and then serve.