A year after the book came out, there's global interest in Cheryln Cadle’s book, Letters from Christopher: The Tragic Confessions of the Watts Family Murders, following the release of the Netflix documentary. The book includes letters written by Chris Watts revealing horrific details about the 2018 murders.

American Murder’s Chris Watts, who killed his pregnant wife Shanann Watts and their two daughters, details in his letters from prison that he tried to kill Bella, 4 and CeCe, 3, twice.

Watts is serving life imprisonment without the possibility of parole for the murders he committed on Aug. 13, 2018. He was having an affair with his colleague Nichol Kessinger at the time of the murders.

The release of Netflix’s documentary American Murder: The Family Next Door on Sept. 30 has made him famous around the world. And now there is global interest in Cheryln Cadle’s book, Letters from Christopher: The Tragic Confessions of the Watts Family Murders, as well.

The book was published by Dorrance Publishing in September 2019 or 13 months after the Watts murders.

Watts began corresponding with Cadle after she sent him her first letter in February 2019. According to DailyMail Online, she wrote, “Let me just say, the crime was horrific, so I’m not writing you to tell you how wonderful you are or that I want to be pen pals.”

The 65-year-old author said in an interview with her publishers last year that she and Watts exchanged close to “100 phone calls and thousands of words in letters he wrote himself.”

In one of his handwritten letters, Watts details how he first attempted to kill his daughters before strangling his wife.

He said that on the morning of Aug. 13, 2018, he went to his daughters’ rooms before he had an argument with Shanann.

“I went to Bella’s room, then CeCe’s room and used a pillow from their bed. That’s why the cause of death was smothering. After I left CeCe’s rom, then I climbed back in bed with Shanann and our argument ensued.

“After Shanann had passed, Bella and CeCe woke back up. I’m not sure how they woke back up, but they did. It makes the act that much worse knowing I went to their rooms first and knowing I still took their lives at the location of the batteries.” 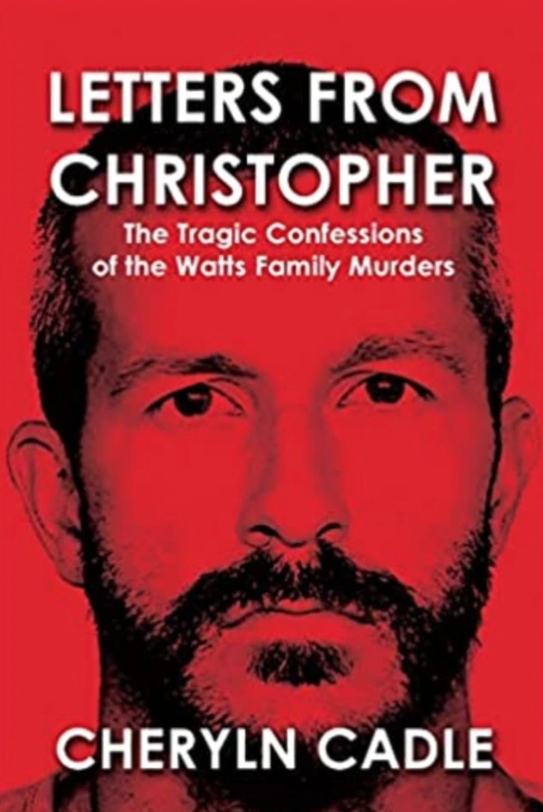 The location is an oil site owned by his then employer Anadarko Petroleum.

Cadle told her publishers that it was difficult “hearing the horrific details of the murders from the murderer himself. Hearing how he took his baby girls and so coldly put them in these oil batteries. It was hard visiting a murderer and having to be thoughtful and kind to someone who later sought attention and enjoyed becoming famous.”

In his confession to the Frederick, Colorado police, Watts said the murders were spontaneous, but his letters to Cadle indicate otherwise.

“August 12th when I finished putting the girls to bed, I walked away and said, “That’s the last time I’m going to be tucking my babies in.” I knew what was going to happen the day before and I did nothing to stop it!”

Later, he said of Shanann, “Isn't it weird how I look back and what I remember so much is her face getting all black with streaks of mascara? All the weeks of me thinking about killing her, and now I was faced with it...

His daughters walked in on him as he was wrapping Shanann in a bed sheet.

Watts drove to the oil site where he buried Shanann, smothered CeCe first and then he went for Bella.

“Little quiet Bella had a will to live. Out of all three, Bella is the only one that put up a fight. I will hear her soft little voice for the rest of my life, saying, “Daddy, NO!!!” She knew what I was doing to her. She may not have understood death, but she knew I was killing her.”

Watts had given his permission for Cadle to use his letters in a book but apparently changed his mind after it came out.

Cadle said, “Christopher was happy until he saw it all in print, and with the problems from his family, it’s hard for him. He always does what he is told. He was conditioned to do that. His mother didn’t want the book because it was admitting what she has fought against from the beginning—saying he couldn’t have killed his girls. So he was upset with the final product even after being aware of the book’s content all along.”

In his letters he also talks about ministering to prisoners should he ever be released.

There are several books on Chris Watts available in print and online, ranging from examining his psychology to being part of true crime anthologies, and one claiming it’s all fake news.

Despite his prolific letter-writing, Watts’ story still has unanswered questions, such as: Where is Nichol Kessler now and did she really not know he was going to murder his family? And does Chris Watts, at last, feel remorse?