Style Living Self Celebrity Geeky News and Views
In the Paper BrandedUp Hello! Create with us
Kang Garcia

Calix is tired of the “raptivist” label.

The portmanteau itself sounds like a crude soundbite, an anachronistic creature cobbled together by legacy media. He’s certainly built a discography that fans and casuals alike have embraced in their own ways, his fiery songs enshrining an image of both social conscience and elder statesman of Pinoy hip-hop. Yet, the rapper has also keenly felt the tokenization of this side of his repertoire.

“What even is a raptivist?” he mused on our Zoom interview.

That’s not to say that “Crash and Burn,” an EP of five ingeniously catchy songs and his fourth release overall, is a repudiation of his persona as protest rapper. Rather, he’d like listeners to know that it is an expansion of his canvass and creative powers. Originally conceptualized as a full-length release about a depressed man who tries to deal with his mental health problems, Calix couldn’t quite finish the marathon of a whole album and decided the EP’s songs can stand on their own as a snapshot of the rapper’s 2020 and 2021.

All the numbers floating in my head are killing me / Every time I'm underpaid, drowning down on misery / I just want my family, able to buy some groceries.

There are still echoes of the rapper who spat fire with “Kill them all, kill them all, kill them all / Walang tira. lahat ay maliligo sa dugo” on “Kildemol” off of 2018’s Ikugan. Or the unflinching “Minsan solo, minsan tandem kanilang modus / Yun daw ang utos, ng kanilang pangulo” on “Giyera na Bulag” off of 2019’s Kolateral, the mammoth conceptual critique of Duterte Administration’s appetite for blood and EJKs that Calix made with the Sandata collective—something that earned him and his collaborators an inevitable red tag.

On this new EP, released last November, the songs are wrapped up less in sinister beats and more of a sweet, sonic treatment. There’s an ear toward personal exorcism, something half-journal and half-self-confrontation in the words. It’s on the album opener “Crash and Burn” feat. U-Pistol: “All the numbers floating in my head are killing me / Every time I'm underpaid, drowning down on misery / I just want my family, able to buy some groceries.”

This new EP has one of the best MCs and producers in Pinoy hip-hop putting down the lyrical big guns, taking up a scalpel to get up close and examine the ills and beauties of the stories in him and around him. He’s both thrilled and repulsed by what he’s found in the guts.

Down the track list, insight on hypocrisy is delivered with dynamic horns, a smidge of guitars, some hip hop centric percussions all aimed at virtue-signaling faux wokes on “Some of Y’all Part 2” feat. M4660T and BLKD. You can almost hear Calix cackling behind the rhyme: “Kamandag sa internet, wala namang talab / Pag sinabi mag-armas, umaatras naman.” This track is my best pick. It sounds like The Roots and Tupac having strong opinions on the Twitterati and jamming it out through a big band sound. Calix pointed out that yes, there is a part one, but it’s on the album of M4660T. “I wanted to reiterate the point of Part 1 here.”

This new EP has one of the best MCs and producers in Pinoy hip-hop putting down the lyrical big guns, taking up a scalpel to get up close and examine the ills and beauties of the stories in him and around him. He’s both thrilled and repulsed by what he’s found in the guts. Why, there’s even some auto-tune on here for texture and atmosphere.

Calix as the Ghetto Priest is still here, albeit his wrath has simmered down in this one, preferring to comment on his own soaring hopes and painful doubts—“Is it bleak? Is it weak? / To admit that I creak?” he asks on “Crash & Burn” and it reminds me of the wise man who declared how courage is only possible when you feel afraid and disarmed, and damn the conventional “mahinang lilalang” chest-thumping braggadocio. The sentiment is a very dope track in itself.

PHILSTAR L!fe spoke with Calix about making this new record, the burden and success of being a raptivist, and the current pre-election drama.

There’s plenty of hooks and very pop stuff on this EP. You also sound way less angry, are you though?

“Crash & Burn” is a little brother to the Ikugan album, but this one is more polished. I wouldn’t say I’m less angry but I’m trying to dive into different sounds. I just decided it would be an EP since I couldn’t make the whole album work because of pandemic pressures and everything else. It’s still a testament to where I am right now. This is a snapshot. On some aspects yes, I’d agree it’s very pop in its sensibilities, especially first two songs.

You sound quite playful here, like you are experimenting with sounds that might not necessarily work on paper.

I do try to get inspiration from different genres. I try to incorporate different sounds. Every time on every album, with regards to soundscape, that’s what I try to do. I try to incorporate stuff that I enjoy not just the baseline which is very hip-hop but also pop, funk, and synthwave elements, to name a few, also some guitar since my roots are in hardcore punk.

It gets tiring to be called a raptivist.

They’re refreshing tonal profiles for someone who’s been pretty much tagged as a “raptivist,” which I imagine is pretty exhausting to be called much less live up to.

It gets tiring to be called a raptivist. It is. What even is a raptivist? Sobrang cringe nung label na yun kasi you’re boxing in an artist. There’s obviously tokenization happening, but that’s what happened with Kolateral.

Listeners took something they needed from “Kolateral.” For some it galvanized their anger, for some it concretized into a story what they’d only heard on the news as tragic statistics.

People embraced it in their own way and I’m happy about that. Kung napatayo ka ng music, then that is absolutely great! If it made you really angry, made you join an org, or made you research more, then one of its jobs has been accomplished. We wanted to make a technically beautiful album and I think we hit the standards we’re going for. If you just appreciate the production at the end of the day, it’s just music. It’s not that big of a deal.

On “Crash and Burn,” what was the full concept album supposed to be about?

My initial plan was to have a cool story arc about this guy who loves clubbing but is depressed as heck. This depressed guy is supposed to address his mental problems in what is now the fifth track—dapat yun talaga yung first track. His friends try to get him out of his funk by clubbing. He meets someone there. Then he’ll hear that his favorite club was raided by the police. Then the rest of the arc will be a story of his attempts at revenge against the police.

That’s a great story, but the EP songs also do sound good all on their own without the big narrative you planned.

I do think the EP can stand alone. Mahilig lang ako sa may overarching stuff. Like in Ikugan the first half is the external journey and the second half is the internal.

How does the current pre-election campaign circus look from your own seat and news cycle?

My news cycle is delayed and madalas akong huli sa balita. But I do try to, especially since it’s almost election season. I’m just a regular guy who’s likely going to be affected too with how our elections turn out. I would consider myself a petite bourgeoisie too and pretty lucky at that, versus the rest of our countrymen. Truth is, majority of us will be greatly affected by this clown sh*t show. 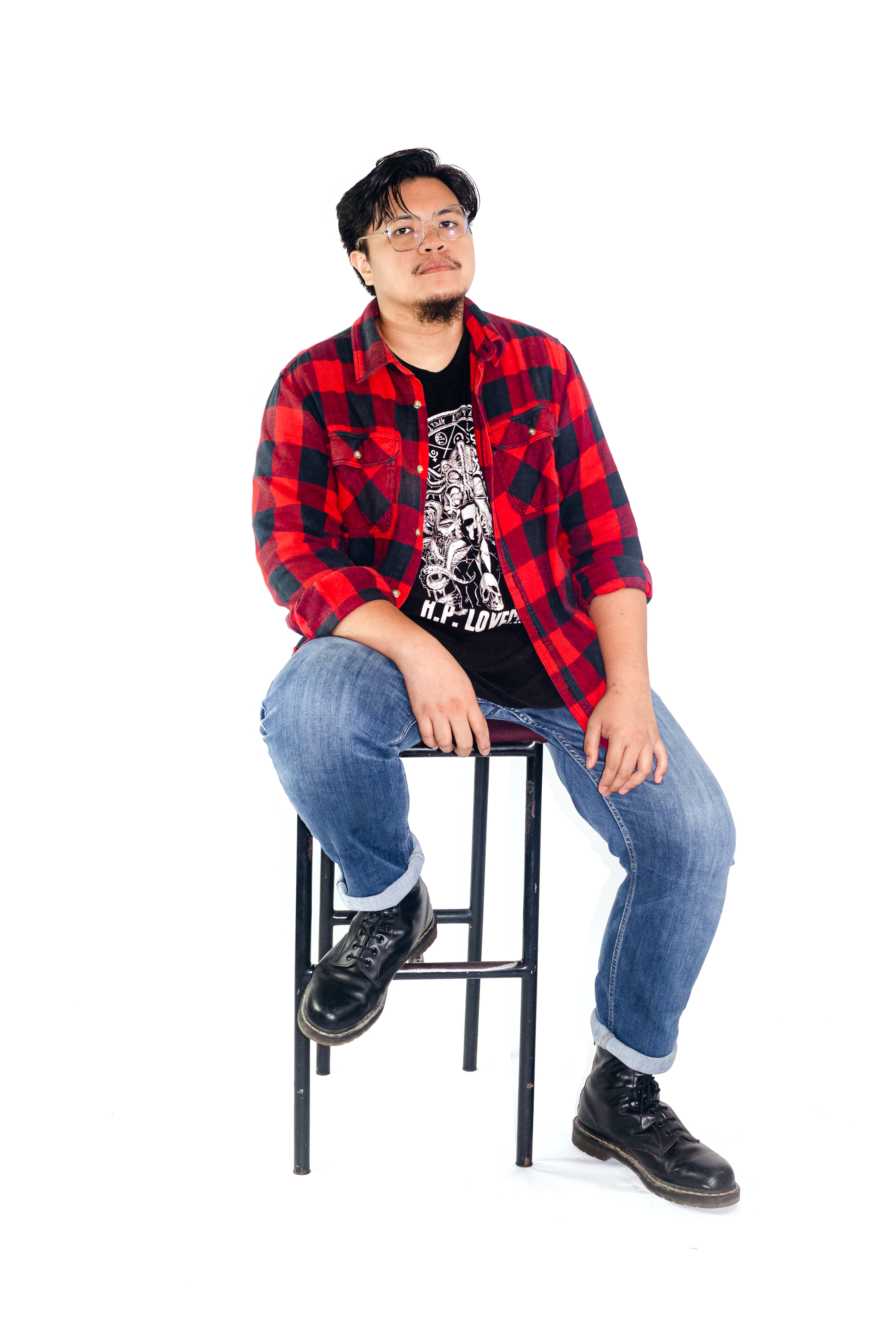 If I don’t sound hopeful it’s by design. I sound nihilistic. It’s the same every election that’s why I don’t really believe in elections any more. And no, I’ve never voted. It’s the same system that seats these guys so why participate in it? At the end of the day these are politicians, hindi na sila tao, different entity na sila. Kahit sino pang maupo, mga Pilipino pa rin magdudusa. Magtitiis ba tayo hanggang may maboto tayong tama?

We need to imagine a world that’s beyond this.

Is it a failure of the Filipino imagination that’s one of the culprits?

We are coerced not to imagine by systems that are in place rather than having a failure of imagination. It’s an oppressive system. Violence, for example, when it’s committed by people in power is just something they do, but when it’s done by people who are oppressed then it’s baaad. Bakit ang masa kapag nag-aalsa masama, pero ang tokhang ni Duterte para sa kabutihan daw?

How do you think we might possibly find a way through or around this systemic curse?

Listen to Calix’s Crash and Burn on Spotify.