Even before everything came to a grinding halt because of the pandemic, beloved K-drama hit series Crash Landing On You (CLOY) had already been making waves not just among K-drama fans but also across society—K-drama neophytes, socialites and even celebrities.

The fans of the series, which first streamed on tvN South Korea and Netflix on Dec. 14, 2019 and ended on Feb. 26 this year, have expanded even more as the community quarantine brought by the COVID-19 pandemic allowed more people to hop on the CLOY bandwagon.

The 16-episode Crash Landing On You tells the story of star-crossed lovers, Capt. Ri Jeong-hyeok (Hyun Bin), a high-ranking military officer from North Korea; and Yoon Se-ri (Son Ye-jin), an heiress and a businesswoman from South Korea, who figures in a paragliding incident in the North Korea demilitarized zone, where the two first meet.

Now that the Crash Landing On You is celebrating its first anniversary, let’s take a look at our very own local celebs who have been bitten by the CLOY bug and swooned over the RiRi couple with all the K-drama feels! 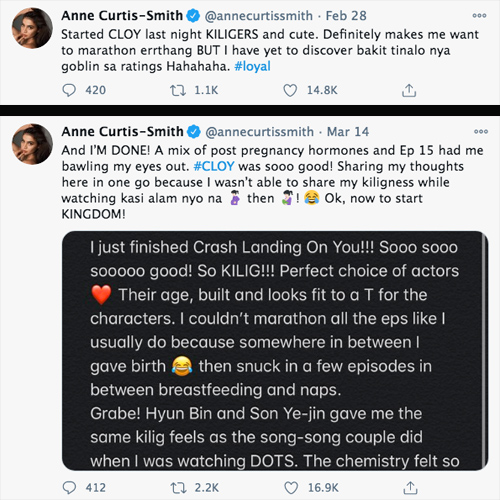 The It’s Showtime host Anne Curtis is known to be a K-drama fan. Early this year, as she and her husband Erwan Heussaff awaited the arrival of their baby Dahlia Amelie, Anne peppered her social media with updates of her K-drama marathon.

It was her fans, and even It’s Showtime co-host Ryan Bang, who urged Anne to watch CLOY. She started watching the series on Feb. 24 and finished it on March 14! She shared that she was not able to do a usual marathon of the CLOY episodes because she gave birth around the time and was able to sneak in a few episodes between her baby Dahlia’s breastfeeding and naps.

“I’m DONE! A mix of post-pregnancy hormones and Ep 15 had me bawling my eyes out,” said Anne, who loved the “storyline, OST, supporting cast and everything” about the series. She also shared that her husband Erwan watched the whole series with her.

It is no secret that It’s Showtime host Karylle is a K-drama fanatic and is particularly fond of Lee Min Ho, who starred in the hit series Boys Over Flowers and The Heirs. So it’s no surprise that Karylle was one of the first celebs to get into the CLOY fandom.

She even urged her co-host Anne Curtis to watch the series when Anne was asking her fans if she should start watching the series, which around that time has already been gaining a lot of buzz.

John Prats and Isabel Oli are just some of celebrity couples that got hooked with Crash Landing On You.

The couple posted on their respective Instagram accounts a poster of the series, where their faces were edited over the characters Yoon Se-ri and Ri Hyung Hyuk.

In his post, John shared that watching CLOY with Isabel is their bonding when their kids are already asleep.

The Gonzaga sisters raved about Crash Landing on You on their social media accounts.

In one of her Instagram stories, Toni shared a video of a kilig scene where Yoon Se-ri and Ri Hyung Hyuk kissed. She also admitted in another Instagram story that she (along with many others) has started to get addicted with the series.

Meanwhile, Alex, together with her fiancé Mikee Morada, made a CLOY parody for her YouTube channel, which has over seven million views as of this writing.

Kapuso actress Yasmien Kurdi is a CLOY fan girl. She even went to the official tvN Drama’s Instagram page and commented, “You made me laugh and cry at the same time.” She also posted another comment, pleading for a sequel. “Please don’t make us cry. I want a happy ending and Crash Landing on You Part 2 please.”

As a tribute to the beloved series, Yasmien made a cover of CLOY’s official soundtrack Flower, originally sung by Korean-American artist Yoon Mi Rae.

The Megastar is a proud fan of K-pop and K-drama. Sharon’s adoration for everything Korean is seen on her social media.

Sharon once posted a photo of actor Hyun Bin and expressed her fondness for the actor in her caption, “Hyun Bin, my heeeaarrtt…”

Her husband, Sen. Kiko Pangilinan, even made a fun, CLOY-inspired collage greeting for their 24th wedding anniversary!