The hero movie is not a popular genre in Philippine cinema. In fact, there have been only around 10 in the last 10 years. And that’s already perhaps the most productive period for the genre ever.

Hero movies are mostly period films that are very costly to produce. And because most of them are more academic (read: history lessons on celluloid) than dramatic, they don’t set the box-office on fire the way comedies, romances, and dramas do.

There have been exceptions, of course, but they’re very few and far between. How few? Two.

In 2015, Heneral Luna captured the attention and, more to the point, cash of a wide range of audiences, from students to seniors, to the tune of over P256 million. That’s more than three times its P80 million budget.

You’d have to go further back in time, 23 years to be exact, to find the other exception.

The movie is the 1998 Metro Manila Flm Festival entry Jose Rizal. Although costing more to produce (estimated to be as much as P120 million) and earning only half the gross of Luna, the 3-hour epic was a certified blockbuster, the first Filipino historical film to breach the P100 million mark in ticket sales.

These two films also garnered wide critical acclaim that cements their status as the all-time tops in the genre.

How did they make such indelible impact? And are there other breakthrough heroes among Filipino hero movies?

Released as an entry in the 1998 Metro Manila Film Festival, right smack in the middle of the year-long celebration of the centennial of the declaration of Philippine independence from Spanish rule, the historical biofilm was required viewing for many students throughout the country. 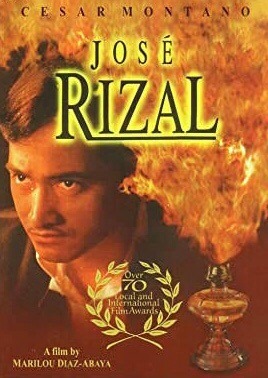 It turned out that the movie did not really need such scholastic endorsement to get people into theaters. Much of the hype for the film centered on its then previously unheard of record-breaking astronomical production budget and the kind of lavishness and craftsmanship only seen in Hollywood movies that it afforded.

It worked big time. Rizal towered high above the five other festival entries at the box-office on Opening Day and soared even more after it swept the awards, winning all but one trophy (and the only reason it lost the Best Actress plum was that all the major female characters in the film are supporting roles).

But hype and awards alone are not enough to sustain a movie at the tills, let alone take it to blockbuster status. Rizal ended up pulling in a total gross of P125 million from its entire theatrical run—an unprecedented amount for a local historical film, one running at three full hours at that—clearly points to how sticky the film is.

Directed with masterful theatrical flair by critically acclaimed veteran Marilu Diaz-Abaya (Moral, Karnal, Brutal), working on a rich, layered, dynamic script by a three-man team of screenwriters led by her multi-awarded Moral scribe Ricky Lee, this retelling of the life of the country’s national hero was unlike anything that came before it.

It eschewed the linear narrative of most historical films in favor of a jumbled timeline. It also refused to stick exclusively to textbook facts, often probing deeper into the character and psyche behind the Rizal image and persona and filling in some gaps in what is known about him and his life with flights of creative fancy, mostly melodramatic.

All told, the Rizal in the film—mythically heroic but at the same time relatably human with foibles and flaws, sometimes vulnerable, sometimes cocky, sometimes conflicted—is not exactly like the Rizal the almost saintly hero that the average Pinoys know from history classes.

It’s this aspect of the film, more than scale and magnitude of its massive production that made Jose Rizal seem wildly ambitious. And feel, at the time, heroically groundbreaking.

The real groundbreaking Filipino hero movie. Released in November 1999, Bayaning Third World was produced on a shoestring budget, runs for only an hour and a half, and is completely in black-and-white.

In short, it’s the complete opposite of Jose Rizal. 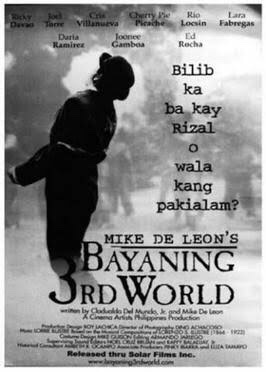 It’s so strikingly different, so polar that it actually feels like it was done deliberately, a direct response to Rizal by Third World director-producer Mike de Leon and writer Doy del Mundo, the team originally attached to the earlier film who had already worked on developing it from 1997 until the project was scrapped a year later over creative differences with the producer.

The latter must have felt validated when Third World bombed at the box-office. But no one can scoff at the film’s creative and artistic triumph in pushing the hero movie towards previously uncharted territory.

Third World is a mockumentary, the first full-length “historical” film of its kind in Philippine cinema. It’s about two modern-day filmmakers who, during their research into Rizal’s life for a biofilm they intend to make, have face-to-face encounters with Rizal’s siblings, lover Josephine Bracken, Padre Balaguer, the Jesuit who writes about Rizal’s final hours, and, finally, Rizal himself.

The film is nowhere near as interested in telling Rizal’s life story as it is in asking what makes him a hero. It’s a question the film poses to itself and to the audience as well as it challenges long-held notions about heroism and patriotism.

The film delivers on de Leon’s pre-release “This is not a Rizal film” disclaimer. What it doesn’t deliver is a definite answer to its central question, leaving it open as a live, ongoing topic of conversation not just for its time but also for all time.

That’s what makes Bayaning Third World a most necessary entry in the canon of Filipino hero movies.

The highest grossing Filipino historical film of all time is also its most unlikely hero.

It has no major star whether in front or behind the camera, was not backed by a major broadcast network, and it slipped into theaters quietly without a major marketing push. Jose Rizal it definitely was not. But what the movie does have proved majorly potent—a livewire energy and contemporary sensibility that not only dusted the cobweb off the historical film genre, it valiantly breathed fresh, thrilling life to it in many unexpected ways. 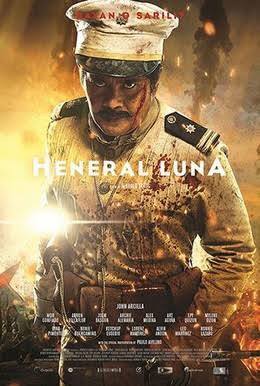 Chief of them is the bold portrayal of the titular character as a brash, brazen, and bracing figure, volatile, hot-tempered, given to spewing invectives at a drop of a hat. Brilliantly captured by John Arcilla’s five-star general of a bravura performance, it all but decimates the conventional image of a hero as a model of statesmanlike decorum and propriety.

That this 2015 film later found itself being seen, in retrospect, as somehow helping pave the way for then Davao mayor Rodrigo Duterte’s presidential victory in the 2016 elections is a testament to its timelessness and timeliness.

Timeliness is likewise the hallmark of this final entry on this list of the top, most important Filipino hero movies of the last four decades.

No, the movie’s inclusion here is in no way an endorsement of Flor Contemplacion, the Filipina domestic worker who was found guilty and executed by the Singaporean government in 1995 for the murder of a fellow Filipina maid, as an individual hero worthy of being mentioned in the same breath as Rizal and Luna. 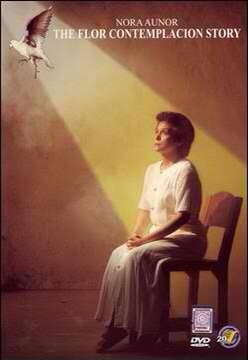 Rather, it echoes the acknowledgment that The Flor Contemplacion Story makes of the status of overseas Filipino workers as heroes in modern-day Philippines. For while much of the 2-hour film is devoted to Contemplacion’s life, covering even such soapy details as her relationship with her husband’s mistress, it presents the devoted wife and loving mother of four from Laguna as a hero, albeit one making personal sacrifices for family instead of social and political ones for nation.

The film posits, long before Hollywood superhero movies did, that not all heroes wear capes or die in battlefields. It does make some sort of a parallel between Contemplacion and Rizal by portraying the Philippine government as complicit in her execution through its inaction in her case in particular and its negligence and incompetence in providing employment opportunities within the country in general.

The Flor Contemplacion Story is hero movie as protest.

This local studio dubs Netflix shows in Filipino, from 'Don't Look Up' to 'Army of the Dead'