It is no longer a surprise that BTS topped the list with more than 5 Billion streams on the platform. Their Grammy-nominated English single, Dynamite, is also the Most Streamed K-pop Song of the Year.

Additionally, the song broke a record by accumulating 12. 6 million streams in its first 24 hours. BTS’ studio album earlier this year, Map of the Soul: 7, where the singles On and Black Swan are featured, was also declared as the most streamed K-pop album of the year.

A rollercoaster of emotions: BTS Map of the Soul ON:E Weekend Concert (and why I will watch it again)

As expected, BLACKPINK is the second most streamed K-pop artist of 2020 with over 300 million streams. It helped that the group finally released the highly anticipated full studio album, THE ALBUM, where their hit single How You Like That – which is the second most-streamed song of the year – is featured.

The solo projects of members from the most loved K-pop groups dominated the Korean OST charts. BTS’ V (Kim Taehyung)’s all-English solo song Sweet Night featured in Itaewon Class tops the list. It’s Definitely You, a collaboration between BTS V and Jin for the 2016 historical drama Hwarang is the fifth Most Streamed Korean OST, despite the fact that the show was shown a long time ago.

Also in the list are EXO Chanyeol and Punch’s Stay with Me for Guardian: The Lonely and Great God.

The solo mixtapes of BTS’ rap line dominated the Top Male K-Pop Artists Globally. AGUST D (a.k.a. SUGA of BTS), who released his second solo mixtape D-2 in May leads the list. BTS leader RM is at the fourth spot, while J-Hope lands on sixth. Though his solo mixtape is yet to be released, BTS V’s solo releases made him land the ninth spot on the list.

Among female K-pop singers, the "Nation’s Sweetheart," IU, tops the list for Most Streamed K-Pop Female Artists Globally. This year, IU had a collaboration with SUGA of BTS (a.k.a. AGUST D) for her comeback song Eight.

Check the full rankings below! 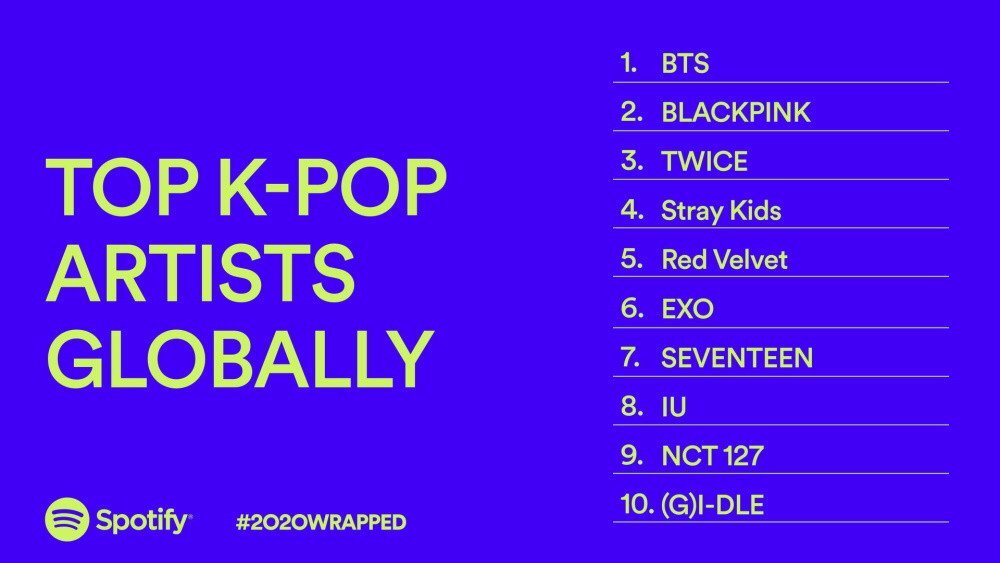 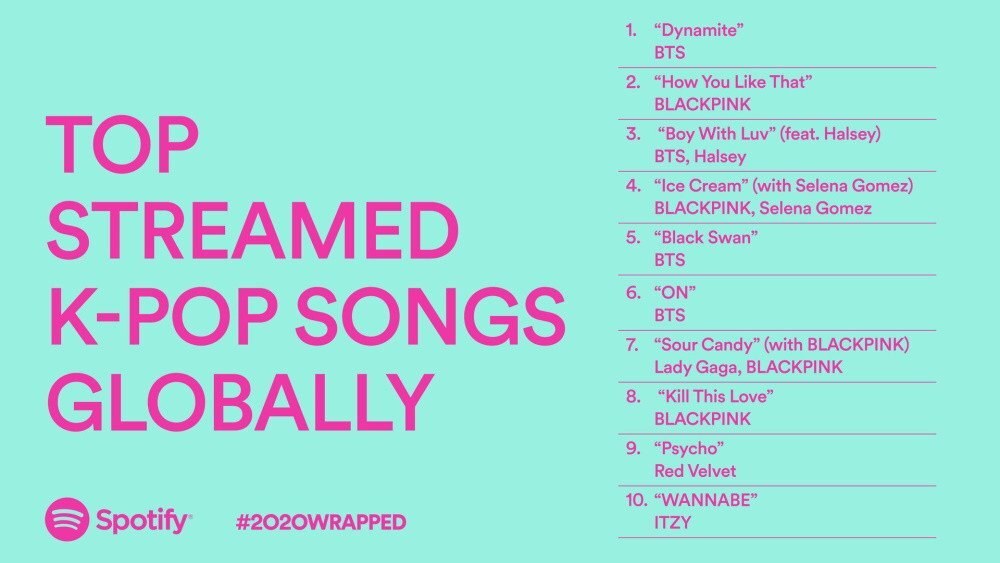 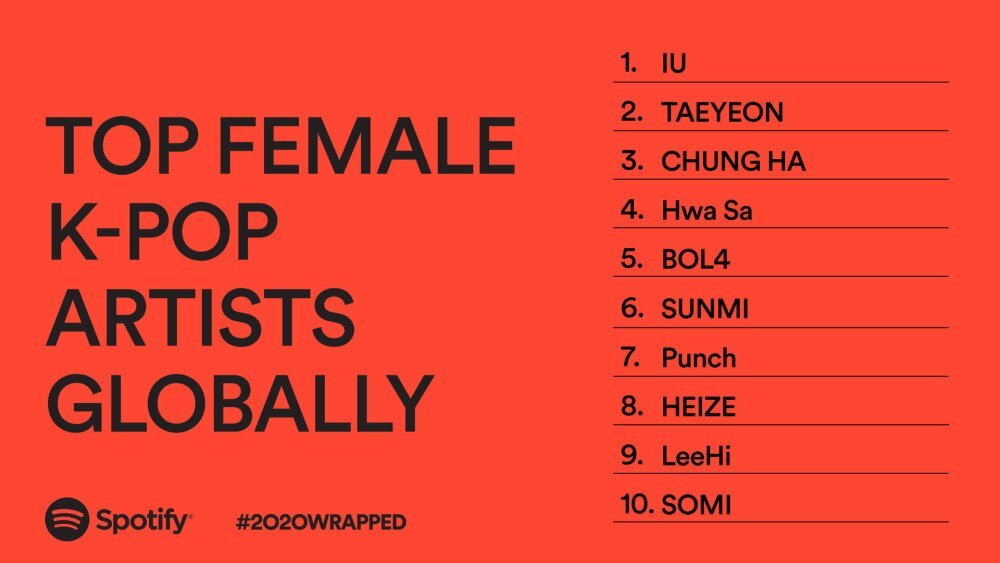 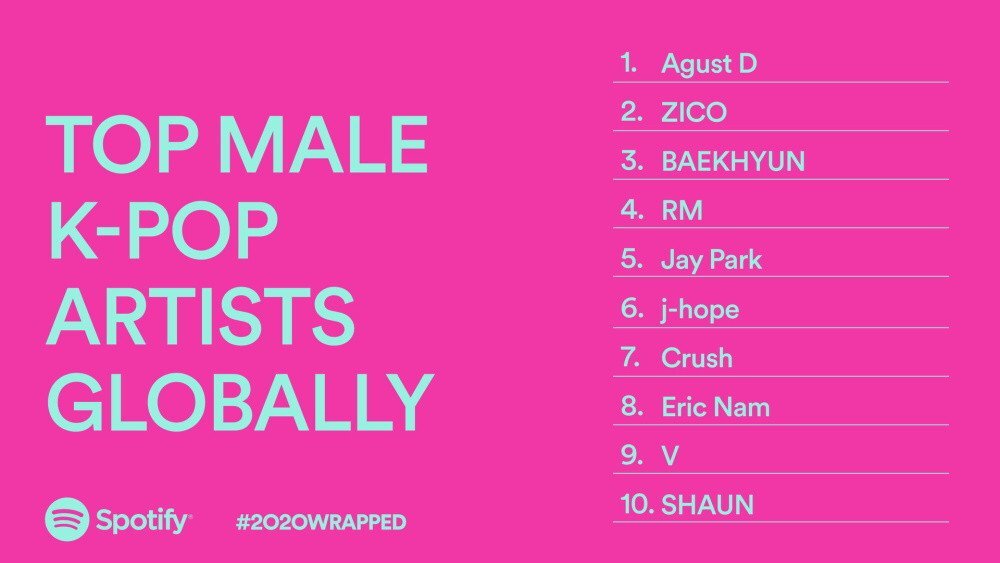 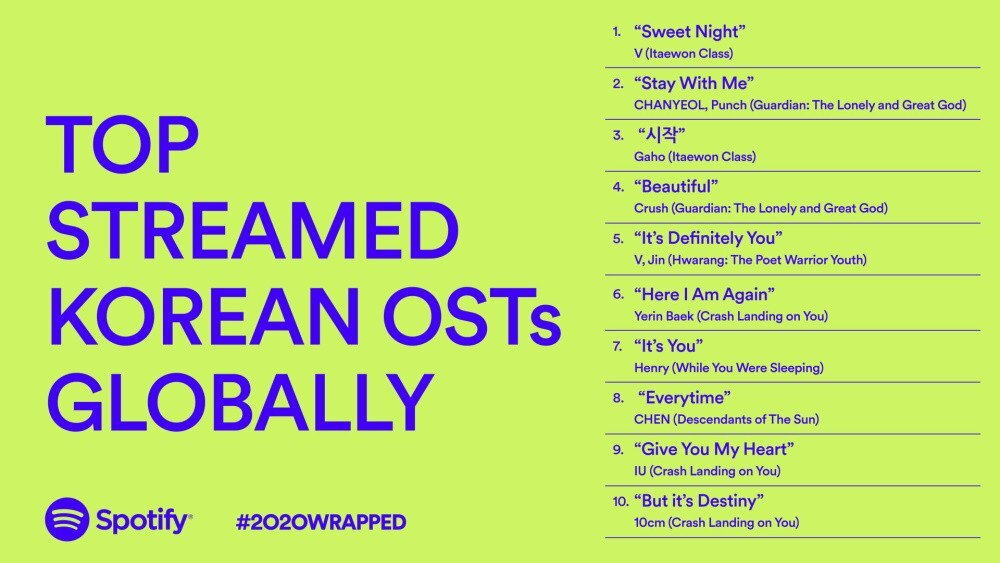